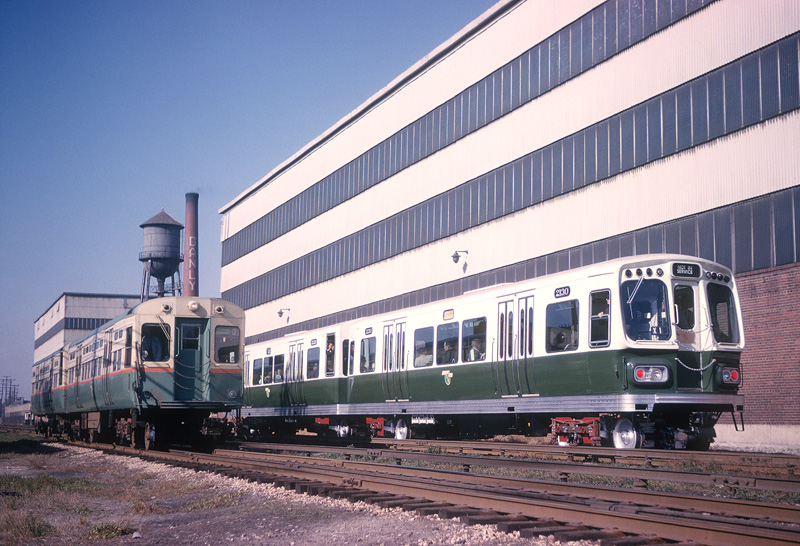 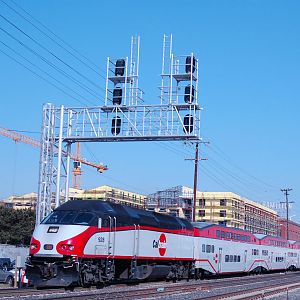 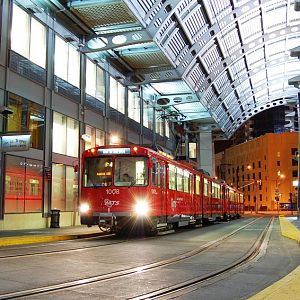 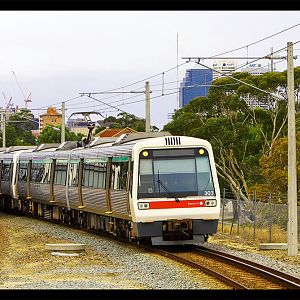 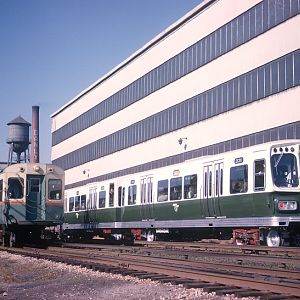 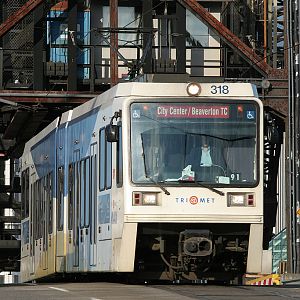 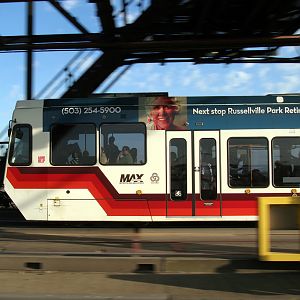 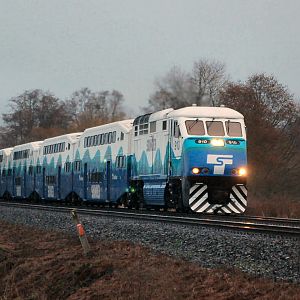 I am deriving most of the information that follows from Central Electric Railfans Association (CERA) Bulletin 115 (B115), and therein appears a photo very similiar to this one. It is published in black &amp; white, this is in color. This was a railfan event sponsored by the CERA, and at this date, this was an accepted form of event planning. They stopped at the 54th St. station, let us off to take a photo of the meet. In the book, the other photographer was standing next to me or close, and he snapped his shutter a split-second after I snapped mine.

The clean cars on the right are new equipment being delivered from Pullman-Standard (P-S) to the Chicago Transit Authority (CTA). They were revolutionary in their time, the front is made of formed fiberglass, the sides and sills are aluminum. All previous equipment was all steel. They also had air-conditioning and sealed windows, and, for the first time on the CTA, flourescent lighting. They were equipped with GE1250K1 motors, General Electric (GE)SCM Control, trucks were LFM CTA-1 (the CTA finally got around to defining their truck specifications), 47,000 pounds empty weight. They were not train-able with any other equipment on the CTA, setting the precident for the &quot;next generation&quot;, numbered 2001-2180.

They were meant to replace or at least augment the 4000 series cars, built in 1923, nearing end of their life expantacy. It is possibly they are the only example of a rapid-transit car built and delivered by P-S to the CTA. They built some railroad standard trainsit cars, but these cars were unique in being only 48 feet long.

On the left is a 6000 series set of cars. They were built with parts of the streetcars that the CTA inherited. The original concept was to adapt the PCC (Presidents Conference Car) to rapid-transit use, but an alternate concept emerged, utilizing parts of the PCC with a new carbody. One each PCC was sent to the St. Louis Car Company (SLCC) and P-S for test adaption. In the end, SLCC won out, building #'s 6001-6722 for the CTA. In CERA Bulletin #115, the photo is credited to Raymond DeGroote, and the caption states these are #6622-6221.

By the time the CTA was formed (around 1947), it was obvious that the streetcar system was in need of overhaul, or replacement. They were in the process of receiving new PCC's (Presidents Conference Car) in 1947-48, as the decision was being made to abandon surface steet operations and concentrate on elevated rail operations. Two PCC's were sent out for testing the concept of converting a PCC to a rapid transit car, one was sent to St. Louis Car Company (SLCC), and one to P-S. The first concept was to cut up the PCC, add fast loading doors at each end, but in the end it was decided to produce new carbodies and recycle the motors, trucks, control, motor-generator, and certain body components. From my reading, they appeared to recycle the PCC windows and sashes as well.