CGW101c said:
I came up from the south hoping for a train at one of the old wooden bridges. "Missed it by that much" as Maxwell Smart used to say. Pile driving at Leshara so no trains the rest of the day. 2342 was back in Fremont by the time I got there. All I saw was the orange blur fade into the horizon. Did see the 4188 of the UP at Yutan. And a couple of standing UP trains. And the CBR 901 tucked in behind the grain elevator at Fremont. Looks like it's Ex TNO 245, SP 3357.
Click to expand...

Take me to the bridge next week. I don’t know where that is.

Zoohogger said:
Here are a few more from east side of Fremont. 2 waiting trains and mounds of soybeans. And some light power waiting to go east.
Click to expand...

What is on the flat cars in the last photo?

I think those are the generator housings for wind mills.

So, I've been trying to get a picture of a north bound train at this old wooden bridge at MP 17 on the Sioux City Line. I waited 4 hours today. Actually I snuck away to Fremont for a bit because MOW was working on the bridge at Leshara again. But at 2:55 a NB came with 2 CN loco in the consist. I chased it to Elk where it stopped to meet a SB that was north of Fremont. But time for dinner so I didn't wait. It is about a 50 mile round trip to MP 17 from my house. The 2 UP trains were stopped for a crew change and the BNSF 2342 was do some switching in Fremont. Great day, not too hot or humid. A couple of different views because I can't decide which ones I like yet. These are taken with the 85mm prime lens and one one click of sharpening in the Nikon NX program. Manual 1/1200 @f8 ISO 1000. Anybody know what K stands for in the speed limit sign? 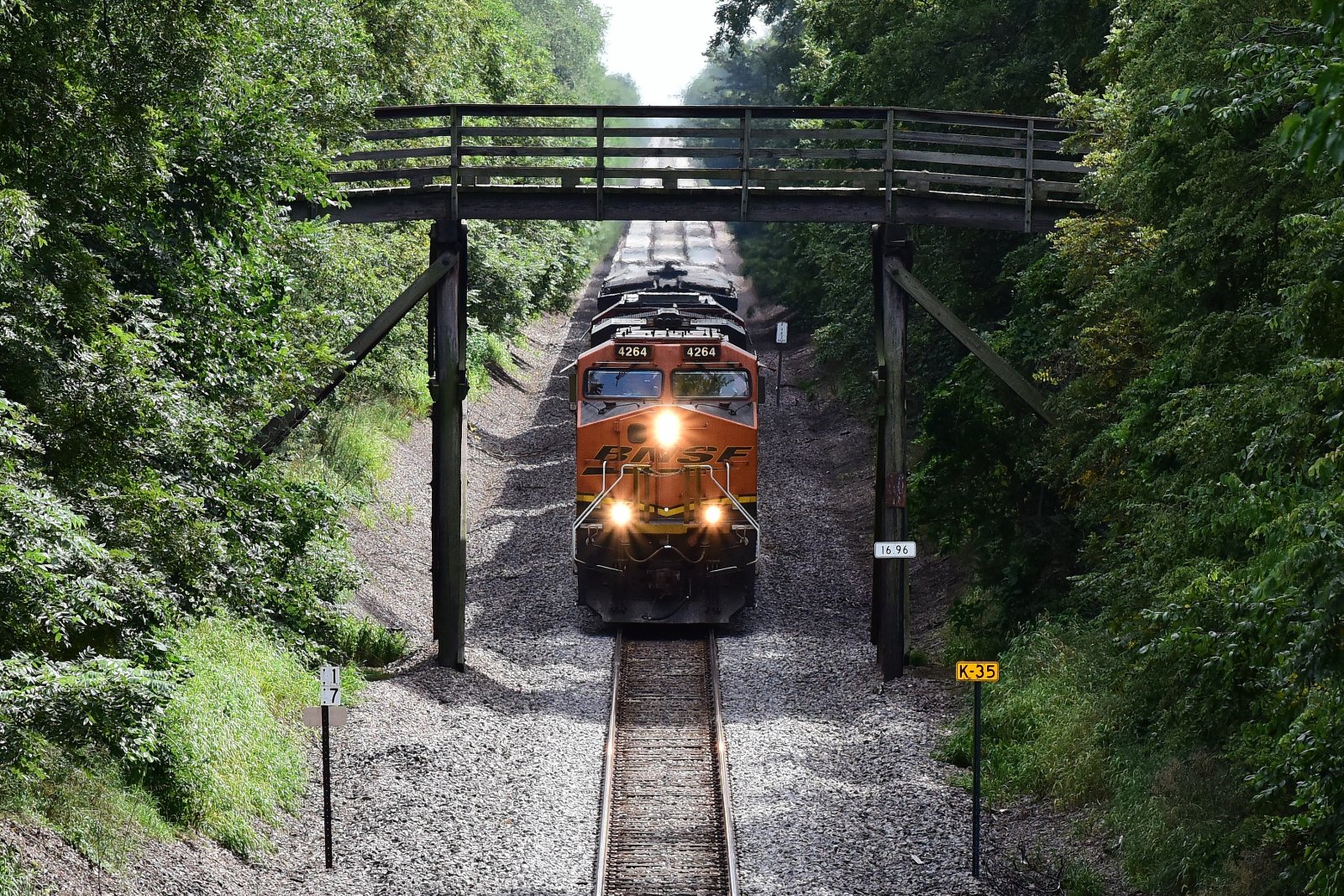 I should include a picture of the "Longbranch" Saloon in downtown Leshara, NE. In case you are ever thirsty while chasing trains on the Sioux City Line 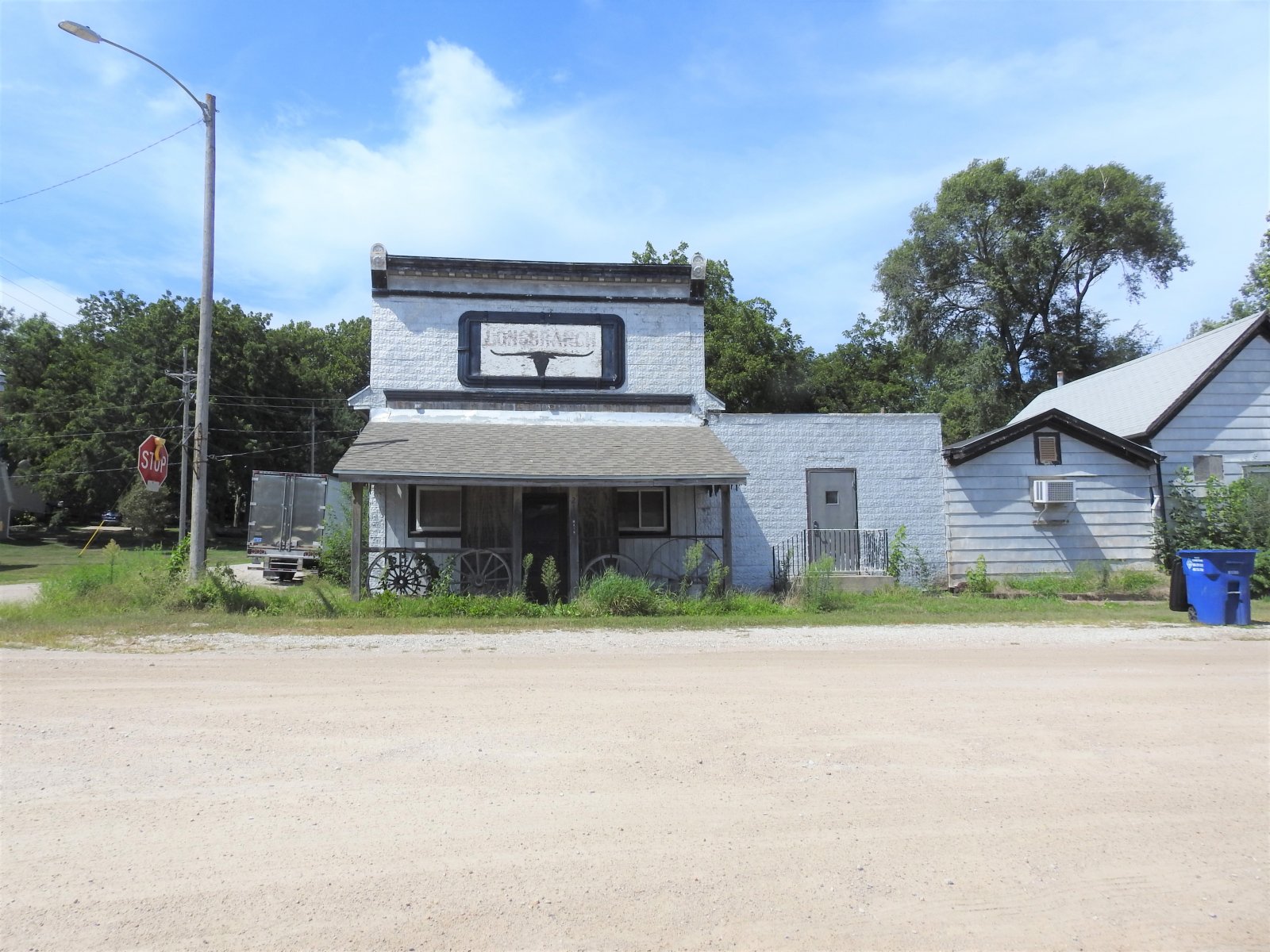 1st 4264 is my favorite. Too bad you had to wait so long.
I washed windows this morning. At least my wife is happy.
B

CGW101c said:
I should include a picture of the "Longbranch" Saloon in downtown Leshara, NE. In case you are ever thirsty while chasing trains on the Sioux City LineView attachment 114199
Click to expand...

That doesn't look too prosperous. Is it still in business?

Picture was taken about 1pm. When I came back through town at 3 there were 2 motorcycles and 2 guys sitting under the overhang. Probably not still a saloon.

Massive fires in the west, hurricanes in the south, civil unrest everywhere, a global pandemic and now this. They are removing the searchlight signals from the Louisville line of the BNSF(ex CB&Q). Picture at South Bend, NE. 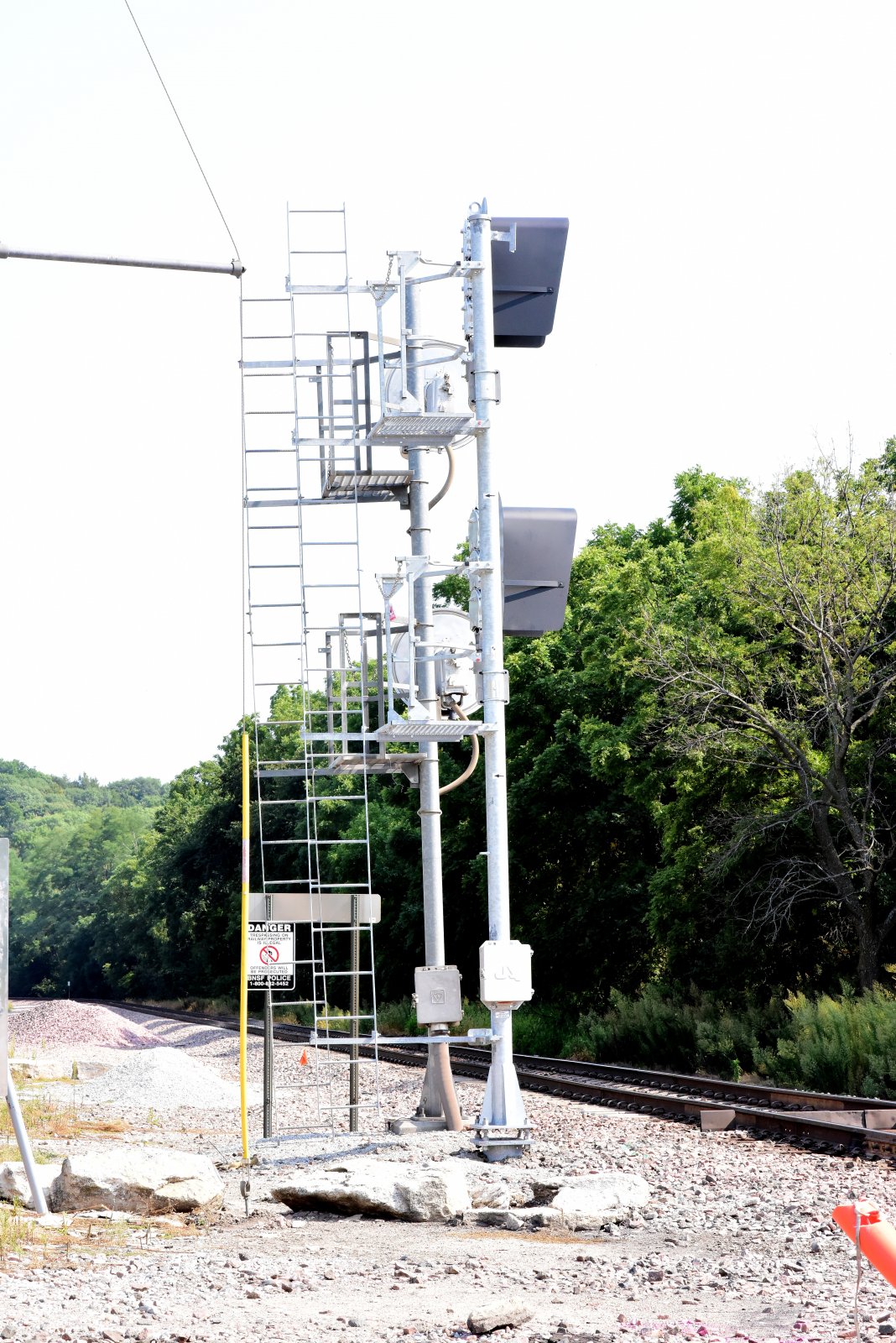 I picked a heck of a year to stop drinkin'.

Quick trip today finds a UP eastbound at Valley, NE. I heard something on Lincoln Sub over the radio but could not determine it's location and direction. Forecast for this weekend 92 degrees on Sat, 101 on Sunday, 84 on Monday, 52 and Rain on Tuesday. You gotta love Nebraska weather. 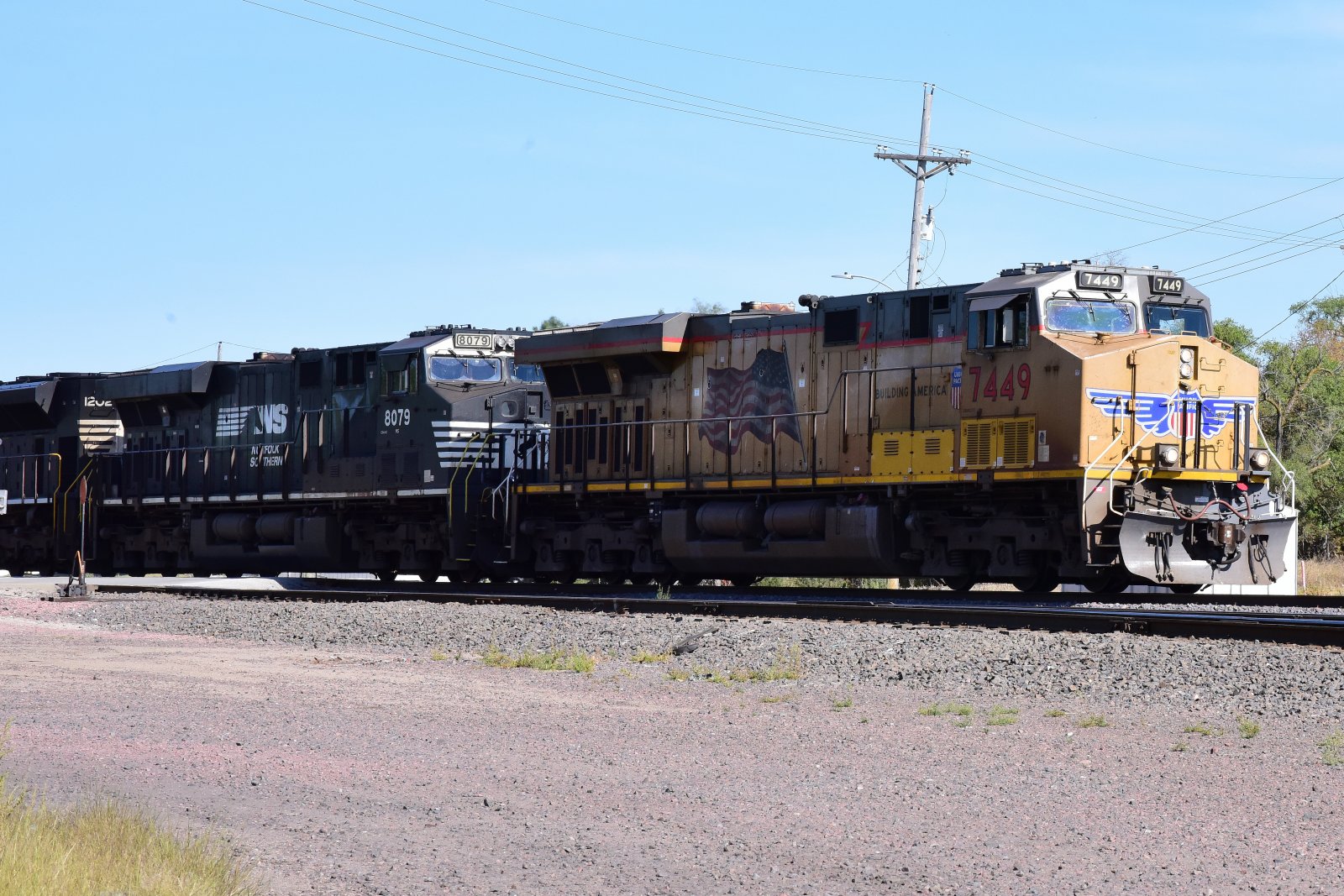 Much easier to love it from up here in the Puget Sound region of the PNW.

Coming home from northern Minn I stopped at Wadena, Minn for 2 trains, one EB(4602) and one WB(6256), and a look at the depot which is now used for the Chamber of Commerce. This is the former Northern Pacific to the PNW

The train with the BNSF 25th anniversary loco(see the "Heads UP" post) had about 6 locos on it. It stopped with some behind trees. Here are two in sight. I like them because of the low numbers.

Enjoyed the photos--hope to see more

My original thought was to go to Kennard to see what was happening. The scanner called a warrant for GTW 5931 out of Council Bluffs. Caught him just north of the Beno's crossing(named for a Council Bluffs Department store owner who lived near there, I think). Running on the adjacent track was a UP coal train. I couldn't catch it on the gravel road and had to wait for almost the whole 230 cars to pass at the next crossing about 5 miles north. The mid train DPU's had a Ferromex in the group. Up the interstate to Missouri Valley. 1 stop light later I was back on HWY 30, again near the end of the train. Crossed over him at Logan and behind a farm truck for a couple of miles. 10 miles later was Woodbine. Pulled off to hear a horn about 1/2 mile away. FIRE THE SHUTTER!!! QUICK!! Counted 122 before the first DPU then another 108 or so. Heard later on the scanner part of this train was to go to Sheboygan. 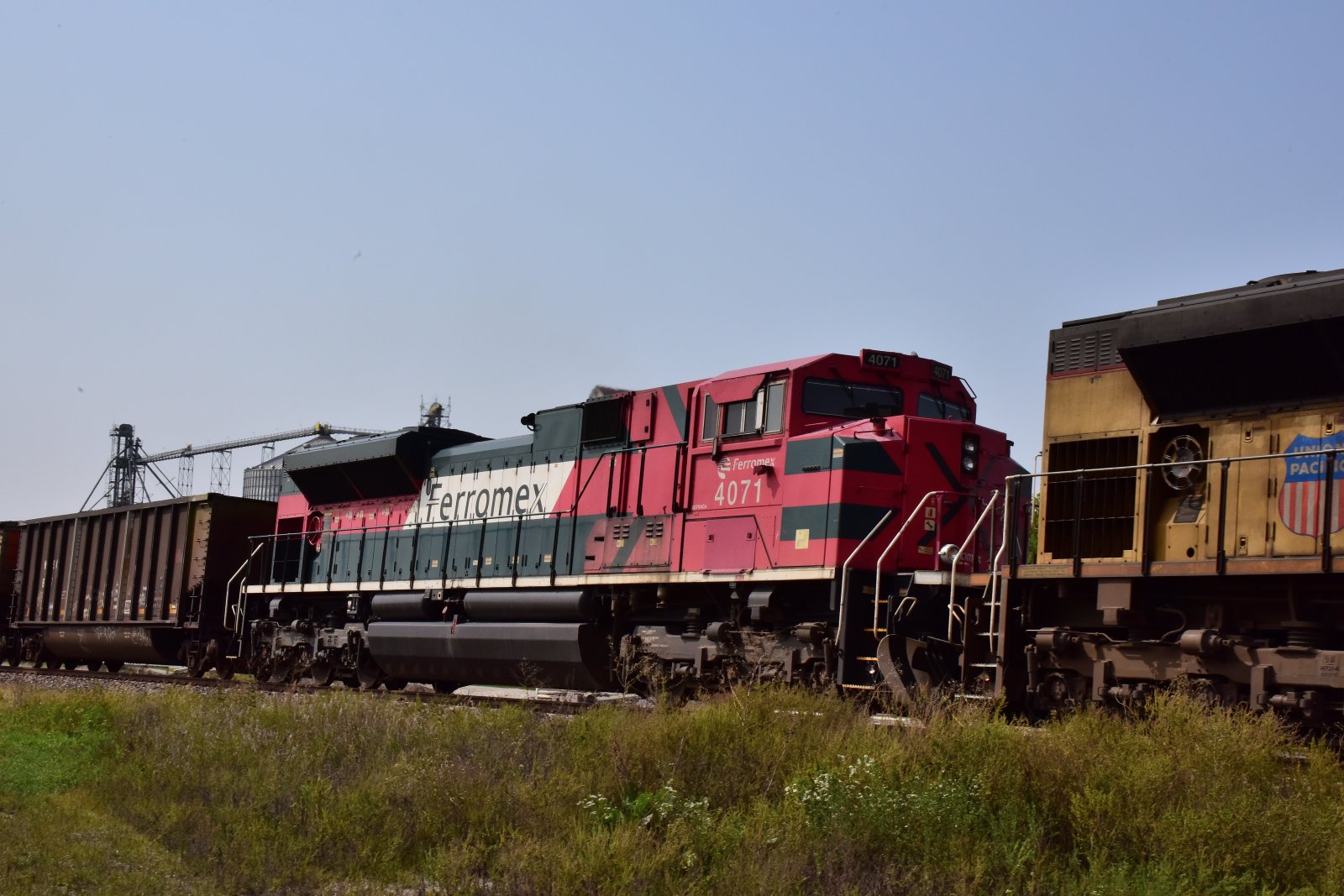 Wow, a 230 car coal train!!!!!!!!!! That is about twice the length of the coal trains we see up here that are on their way to Roberts Bank, BC for transloading for shipment to the Far East.

Another trip to Lincoln this time for lunch with my sons. On the way are some BNSF trains along Hwy 6, including the "Dynamic Tamping Express"

Took a ride to the east today. Heard Iowa Interstate on the scanner. Drove out to a place called Peter. This is where the Chicago Great Western and the Rock Island diverged after the 1952 cutoff to Atlantic was built. RI had trackage rights on the CGW. When the CGW was removed(along the road to the left in pic 8), the RI took over and then the IAIS. I drove a little bit farther east and caught the 507 at a bridge over the tracks. And then chased back towards Council Bluffs and took an image as it crossed old Hwy 6 on the original CGW bridge. Great line for the railroad, few crossings, running at an angle through the countryside, but hard to chase for a railfan. Can't see the tracks most of the time. In the pre scanner days I know why I didn't chase the Rock more. Trees are starting to change color Bill.