We have now returned to the mainline at Tororo and are heading on toward Kampala.

The story continues .... "We leave Tororo is a north-westerly direction following the contours on the north side of the Nagongera Road as far as Achilet (about 5 kilometres outside of Tororo). For the next 10 kilometres the railway stays north of the road until reaching Nagongera, or Nagongora, .............."

Of interest is the number of railway lines on the map between Tororo and Jinja. There is by far the greatest density of lines in Uganda.

The journey continues from Jinja to Kampala .......

“The Nile River Bridge at Jinja was built in the late 1920s. It is perhaps the iconic structure for the whole of the metre-gauge railway system from Mombasa to Kasese.

The first railway in Uganda ran from Jinja to Namasagali on the Victoria Nile where a steamer service ran on to Masindi Port. From there passengers travelled by road through Masindi to Butiaba on Lake Albert. From there they could travel on by steamer to the Belgian Congo or north to Juba in the Sudan.

Train passengers from Kenya reached Uganda by steamer from the railhead at Kisumu and across Lake Victoria to Entebbe or Port Bell. In the mid 1920s the main line in Kenya was extended from Nakuru through Eldoret, and Tororo to Mbulamuti where it met up with the original Jinja to Namasagali line. The new line to Kampala then crossed the Nile at Jinja by a bridge carrying both the railway and a roadway underneath.”

The last part of my own journey to Kampala by train in 1994 commenced once a derailed freight train had been rerailed ahead of us and the passenger train was ‘given the road'. We had waited for over 6 hours at Jinja Railway Station. Travelling by rail was unreliable but really enjoyable!!
R

We are now in Kampala and preparing to travel on to Kasese.

In 1994, I attempted to travel to Kasese and I might have been able to do so if I was prepared to wait in Kampala for the possiblity that a train migth run. In the end my trip to the South West of Uganda was much better served by a road journey via Masaka, Mbarara and Kabale.

Before we take one of those intermittent passenger services from the last century, we take a good look round Kampala Railway Station.
Click to expand...

This post (below) is the penultimate post on the direct route from Mombasa to Kasese. After this there will be three further posts. One to complete the line to Kasese, one to review an old and defunct branch line running north from Jinja and a final post which will seek to cover the locomotives and rolling stock on the Uganda Railway .....

This next post relates to the western extension of the Uganda Railway through to Kasese and the Kilembe Mines. (I am expecting to post twice more about the Uganda Railway. There is one branchline which I have to follow and then I plan to write about the locomotives and rolling stock on the line.)

The Western Extension, as it was known, was built and opened in the mid-1950s, its main target was to reach the Kilembe Copper Mines in the west of Uganda. Kasese was built alongside the Mines and has grown since then into a reasonable size town with industry and tourism building its economy.

Official sanction for building the railway to Mityana was given in 1951, and for the continuation to Kasese in 1952. The decision rested upon a guaranteed source of traffic at Kilembe, and was prompted by the fact that mining development was dependent on some positive step to improve communications. There seemed little doubt that the line would attract some Congo traffic, which would provide new revenue for E.A.R. & H., while the Uganda Government was much encouraged by the very favourable report of an Economic Survey Committee. The concluding sentence of the report reflects the tone of the whole: ‘The committee desires to record its firm conviction that this project will prove eminently successful. and contribute materially to the welfare and prosperity of the people of Uganda”. The capital cost of the extension was £5.25 million, and the Uganda Government provided the Railway Administration with a loan to cover this.
Click to expand...

There is much to explore in the Great Lakes region in Africa! This series of posts relates only to the railways providing access to Uganda but there were a whole variety of different transport services in the area which would warrant further study!
R

My original plan was to provide details of locomotives and rolling stock on the Railway in a single post. This has become a little unwieldy so further posts will follow this one ...

.
It was my intention, before starting this exercise to cover all locomotives and rolling stock in a single blog post. As I began to review the available information in books and on the internet, it seemed that there was enough material to justify more than one post. This and the following posts will not be fully comprehensive in nature but I hope that they provide some insights that are valuable.

Probably, along with many other people, my attention is primarily drawn to the Garratt locomotives on these lines. However, I will attempt to reflect the full range of motive power and rolling stock on the line, references are given where ever possible. Everything in this first post predates the arrival of the Garratt locomotives.

The first of these posts about locomotives and rolling stock on the railways of Uganda and Kenya covered locomotives used by the Uganda Railway. This second post primarily covers locomotives introduced by the Kenya Uganda Railway up until it handed over to the East African Railways Corporation in 1948.

Kenya and Uganda Railways and Harbours (KURH) ran harbours, railways and lake and river ferries in Kenya Colony and the UgandaProtectorate until 1948. It included the Uganda Railway, which it extended from Nakuru to Kampala in 1931. In the same year it built a branch line to Mount Kenya. [1]
Click to expand...

The Kenya Uganda Railway introduced Beyer Garratt locomotives to the network. These were massive machines with huge pulling power which suited the lightly constructed lines on which they ran.
R

One of the small snippets of information I have encountered while writing the series of posts on the Uganda Railway and its successors is an almost passing comment made in a number of texts about the Kenya Uganda Railway Beyer-Garratts numbered 41-44, 51 and 53. These comments refer to these locomotives being sold to Indo-China.

Someone asked me whether there was any information about what happened to these locos in any of the main texts about the metre-gauge lines in East Africa. The only specific reference appears to relate to the locos going to the 'Yunnan Railway'.

It might be that others can shed more light on this, but I thought that it was worth following up. The post below is the result of this.

Research suggests that there are two possible locations for these locos operations after leaving East Africa. The first, initially seeming the most likely, is the Burma-Yunnan Railway which was a British project. The second was a French project. We spend a little time focussing on each project before some final observations are made at the end of this post
Click to expand...

This is the third post about Locomotives and Rolling Stock on the network of lines in Uganda and Kenya.

The network continued to make use of the best of the locomotives purchased by both the Uganda Railway and the Kenya Uganda Railways and Harbours Corporation. The EAR&H renumbered all of the older locomotives into a consistent numbering system. The first two digits of four referred to the class of locomotive and the second two digits to the number in the class. Before we move on to the new purchases, here are a few images of the older locomotives on the system, further information about these classes can be found in the previous posts in this series.
Click to expand...

Very sadly, so very few of these locomotives have survived in any form, let alone in a condition to continue to run on the network.
R

The East African Railways and Harbours Corporation began to look at replacing its steam locomotives with more modern power units. This next post is part of that story.

It is impossible to exaggerate the tractive effort required from the motive power on the line through Kenya and Uganda. In the UK we make a great deal of fuss over the strain placed on standard-gauge locomotives on the West Coast Mainline. Shap, Beattock and Drumuachdar are significant climbs which taxed the most powerful of locomotives. The gradients and the heights which the East African lines surmounted dwarf that UK mainline. These feats of endurance and the relative power of the locomotives required to achieve them on narrow-gauge lines is astounding.
Click to expand... 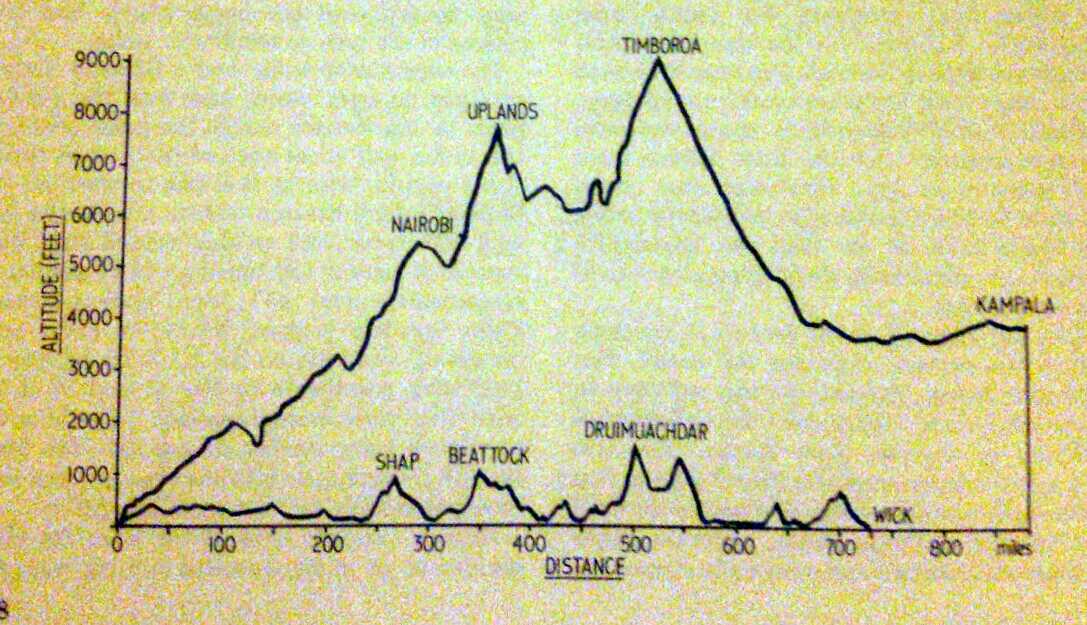 Very sadly, at least from a heritage perspective, the metre-gauge line and its trains have largely been replaced between Nairobi and Mombasa. No doubt the new trains are infinitely better. But their advent has brought to an end the real sense of adventure that travelling the metre-gauge line from Mombasa to Nairobi evoked!
R

I anticipate that this is the final post in this series about Uganda Railway and its successors. I trust that you have enjoyed these posts. If you have, then I have been posting about metre-gauge lines in France and you might wish to look at those posts in due course!

This post provides a short survey of carriages, goods wagons and brake vans/cabooses on the network in Kenya and Uganda from the inception of the Uganda Railway in the 19th Century to through the demise of the East African Railways Corporation in 1977 on to 2018 when this post is being written. The approach is eclectic rather than structured and the post includes some interesting vehicles.
Click to expand...

Thanks, @rogerfarnworth this was a really good thread.
R

Over Christmas 2018, I have taken some time to look through older Railway Magazines which have been waiting for my attention for months. I have enjoyed looking at copies of The Railway Magazine from 1950 and found a complete copy of an article about the Kenya-Uganda Railway in the April 1950 edition of the magazine.

I thought the full article may be of interest here. Please follow this link:

Continuing to read through the 1950 editions of The Railway Magazine, I came across this article in the June issue:

I have been enjoying Adrian Garner's book "Monorails of the 19th Century." I discovered that the first rail link between what was at the time Port Kampala and Kampala itself was a monorail!

Rolling stock was propelled along the line by bullocks rather than any form of mechanical propulsion.

The line was less than 8 miles long and lasted no more than a few years.

These are the details: