When I went by Interbay with my commuter train, this evening, I saw the first GP60M in Seattle in many years plus the very first one in the BNSF orange and green scheme that I've seen. Engine was BNSF 104. Don't know if it's just visiting or is joining the 4 GP60 B units in the area for local work and more GP 60Ms will show up.

Thanks for the heads up. I'll keep an eye out for it up north.

I was living in Chicagoland in the late 80's-early 90's when the GP60M's and GP60B's were brand new and leading Santa Fe freights into the Windy City. I believe they were the first units since the FP45 and passenger U Boats to come from the factory in the traditional silver & red War Bonnet scheme.

It hadn't moved as of Friday on track 5 south end near the round house.

Seems like it may be a new permanent feature in the area since it just came out of the maintenance shed. Whether in Seattle or a nearby city in the Northwest, watch for it on the mainline soon. That's GP 60M, BNSF 104.

Yesterday, GP 60M, BNSF 105, showed up in fresh paint in the newest scheme at the Interbay Roundhouse, so now we have two A units to go with our 4 B units.

Heard today that GP 60Ms, 104 and 105, are going to be a fixture around here on locals. They both are having some teething problems after the overhauls they received. Part of the overhaul was a change which was a removal of the desk top controls and back to a left side operating station like some of the newer GM's.

Yesterday saw BNSF 128 in shiny new paint switching by itself for a switch job at Balmer Yard at Interbay. The setting sun’s angle really made the paint very shiny. Also, saw a newly painted 155 at the roundhouse. These newly overhauled and upgraded GP60M-3s are making a big impacted in the area. I wonder how many will end up being assigned here?
B

I saw a GP60M-3 switching at Vancouver about 10 days ago, but I don't remember the number.

Now 156 is here, too. Not sure why we are getting the GP60M-3s since I see a lot of rebuilt GP39-3s here, too. The number of hills on main and branch lines might be a good answer about the extra 1800 hp over the GP39-3s being the big plus. With the rebuilds and repaints, less and less engines, with the old paint schemes, are out there so get those pictures now. I saw a Santa Fe painted C-44-9W, BNSF 638 on a oil train on Thursday and some really old SD70Ms, still in original BN paint, on various trains. Traffic is up so stored engines are coming out to add their horsepower to the fleet.

BNSFEng said:
With the rebuilds and repaints, less and less engines, with the old paint schemes, are out there so get those pictures now.
Click to expand...

Now quite a pair at Interbay is a GP 60M-3 and an old SW together as a switching locomotive set. Saw it Friday but didn’t see what numbers they were.

I saw 156 pass through Edmonds Sunday afternoon (2-11-18) as the trailing unit of a southbound (tt/west). I'll post photos up in my MP 17 thread in the western US forum.

Bill Anderson said:
I saw 156 pass through Edmonds Sunday afternoon (2-11-18) as the trailing unit of a southbound (tt/west).
Click to expand...

I saw these engines coming into Chicago on the Santa Fe mainline back when they were brand new in War Bonnet colors. 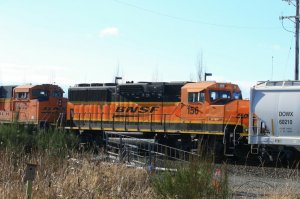 Model ID-ing is easy when BNSF paints it on the diesel. 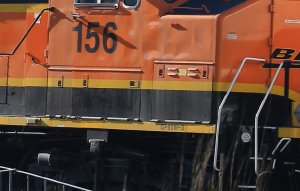 Another GP60M-3 seen was BNSF 138 hanging around the roundhouse on Monday 3/19. Looks like they keep on shipping the SD75Ms and GP60M-3s out here.

Most of the GP60Ms are now doing local switching & not working long distance runs.

BNSFEng said:
BNSF 123 also has shown up and it says on the side in the front: GP 60M-3!! Again in the newer paint scheme.
Click to expand...

I saw 123 Thursday afternoon (4-5-18) on the Columbia Gorge line at Vancouver, WA . It was the trailing unit of what looked like a short, westbound local.
B