It should be headed north to BC sometime soon.

how many original wide cab warbonnets in Red and Silver are left? I saw 614 in near full warbonnet (Santa Fe large on sides, BNSF on the nose and under the windows) in Cumberland, Maryland in early November, 2014. ?

SD45 said:
how many original wide cab warbonnets in Red and Silver are left? I saw 614 in near full warbonnet (Santa Fe large on sides, BNSF on the nose and under the windows) in Cumberland, Maryland in early November, 2014. ?
Click to expand...

I guess it depends on what you call "full warbonnet." If you look through my MP 17 and MP 18 threads in the Western US forum, you will see lots of red & sliver units.

Question to OP: What do you call a "full warbonnet?" Is it a red & silver unit with its original numbering and lettering in Santa Fe (not BNSF) with no BNSF "patching" and/or renumbering?

Little off topic, but somewhat related... I remember when I was a kid, I had an HO Scale ATSF Red and Silver GP9 (or something like a GP9). Did that ever exist or was that paint scheme only in the model railroad world?

brad_in_omaha said:
Little off topic, but somewhat related... I remember when I was a kid, I had an HO Scale ATSF Red and Silver GP9 (or something like a GP9). Did that ever exist or was that paint scheme only in the model railroad world?
Click to expand...

Modeler's license. As far as I know, the first true freight units to be painted in the red & silver war bonnet scheme were the wide cab GP60 and GP60B units of the late 80's-early 90's.

After Amtrak took over passenger train operations in the US in the early 70's, Santa Fe went to great lengths to paint their passenger engines into freight colors, including fairly new units such as the FP45, U28CG, and the streamlined U30CG. The red on the passenger F units retained by the railroad for freight service was repainted to blue or yellow, creating Blue Bonnet and Yellow Bonnet units.

Great, thanks for the info. That locomotive went on ebay long ago, but I was curious.

I've not railfanned too much in 20 years, but believe this is a standard CW40-8 (or C40-8W)... I remember when they were brand new back in the early 1990's getting them on a trip out to Tehachapi and thru the south west.

Was very pleasantly surprised to see one at the CSX former B&O in Cumberland, Maryland shops.

Lots of BNSF units running thru on oil (ethanol?) trains that are going over Sand Patch grade.


Sent from my iPhone using Tapatalk
Last edited by a moderator: Nov 25, 2014

The small BNSF stenciled under the road number below the side window might disqualify it from being an "original" war bonnet paint scheme in the minds of some railfans.

That photo has an interesting effect as it looks like a model railroad layout.

Bill Anderson said:
That photo has an interesting effect as it looks like a model railroad layout.
Click to expand...

Tilt Shift. Its fun to do with trains as will as many other things.

Those badly faded, peeling Santa Fe units in red & silver are what I call war(p) bonnets. Someone reported that the peeling and fading was caused by a mistake in the paint formulation at the factory. You would never see diesels looking that bad on the pre-merger AT&SF.
Last edited by a moderator: Dec 3, 2014

wow! thanks for that info! glad the economy is improving enough to get these old girls out of storage and back into use!

A matched, patched & renumbered pair of SD70(?) War(p) Bonnet units have been making recent appearances on the garbage train. Here they are passing by the Edmonds marsh Tuesday (12/16/14). 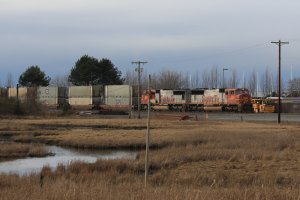 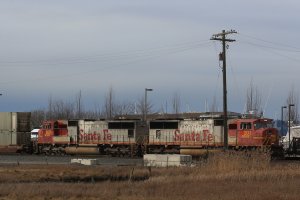 They are actually SD75Ms; basically modified SD70s. I believe they were the last units purchased/ordered by ATSF before the merger with BN.
R

We get a few warbonnet locomotives at Mobest. When I go in tonight, I'll have a look at what's on the engine lead and snap pictures of any there.

I've seen a few where they swap panels between paint schemes too. Somewhere there's a warbonnet with an orange AC cover just behind the cab, and I've seen the corresponding orange loco with the red and silver panel in the same place. Both left a while ago though, so no pics.