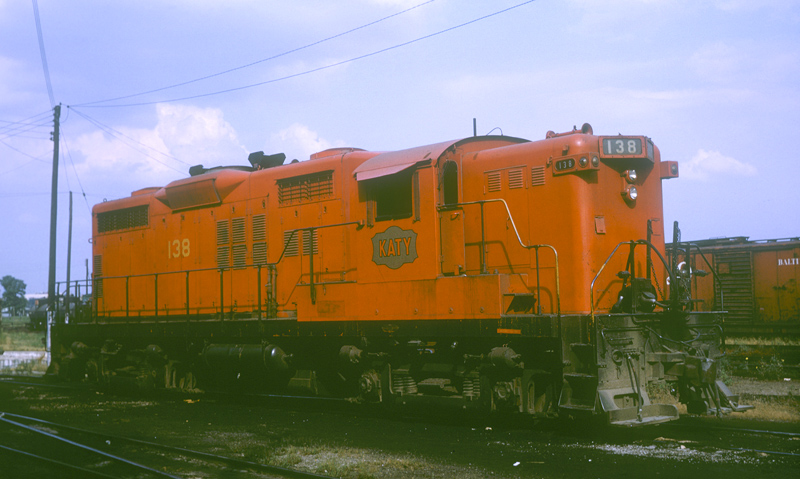 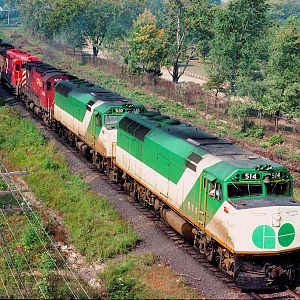 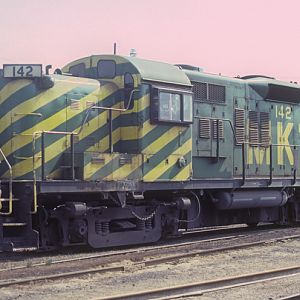 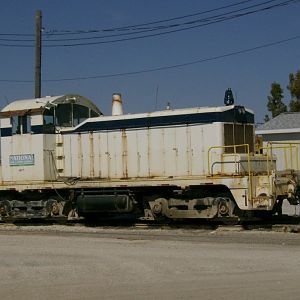 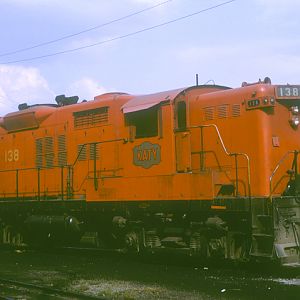 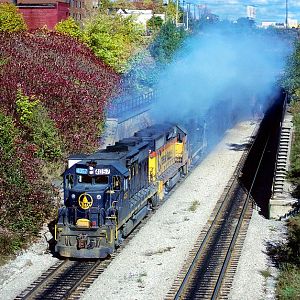 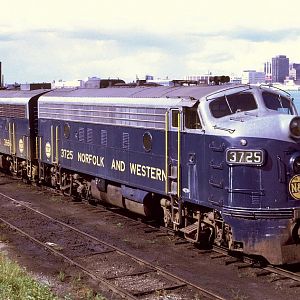 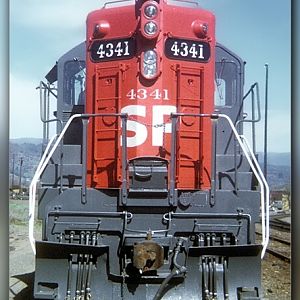 Thomas Berry left a comment below identifying this as a Baldwin AS-16, so I started researching that fact in the book, Diesels From Eddystone, The Story Of Baldwin Diesel Locomotives, by Gary and Stephen Dolzall. According to the book, Baldwin delivered eight AS-16s (road #s 1571-1578, c/n 74891-74898) to the MKT in September-October 1950, only four months after the order was placed, as part of Katys push to dieselize all principal passenger and freight operations. They went to Parsons, Kansas and were placed in service hauling freights to St. Louis. These AS-16s were unusual in that they employed cast frames, the only AS-16s so equipped. Subsequent units would use a one-piece welded frame with end steps and pilot faces permanently attached. Only the very bottom of the pilot was a removable, bolt-on section. In 1952, Katy received six more AS-16s (ordered October 1951, road #s 1579-1582, c/n 75431-75436). All these units had Westinghouse electrical gear (370 series traction motors and 471 series main generators).

In 1952, Westinghouse began to contemplate discontinuance of its heavy electric traction equipment. Baldwin protected itself with a request to General Electric to design a main generator compatible with the 625 rpm 608-series diesel prime mover, and GEs answer was the GT-590 main generator, which would feed power to GE 752-series traction motors. Using GE traction motors required larger traction motor blowers, so Baldwin re-designed the frame, lengthening it by six inches, and the long and short hoods were raised to within two inches of the cab roof. Actual application of the new design to orders was piecemeal because Baldwin used Westinghouse stock as long as supplies lasted.

Click to expand...
That's right - a Baldwin AS16 repowered with an EMD engine and GP9 long hood.
Thanks for the comment. Narrowing it down to AS-16 produced the following info:

According to the book &quot;Diesels From Eddystone&quot; by Gary and Stephen Donzall, MKT received a total of 18 AS-16, built between 9/50 and 11/53, originally numbered 1571-1588. It does illustrate how Baldwin or perhaps EMD adapted the hood to accommodate 45 degree number boards. Obviously a transition design. Also, the cab door is open in this view, it would seem to be on the opposite side of the cab from normal practice.
The cab door being in that location would most likely indicate that this unit was set up to run long hood forward.
I thought that too, but if the doors are diagonally opposite, then the door on the other side would still open up in front of the engineer and controls. The only other explanation is that both cab doors are on this side. I don't know.