What are some of the oldest diesel locomotives still in service today?

Greetings,
I was wondering if someone could tell me which diesel locomotive models are some of the oldest continously serving to see regular duty even in today's railroad environment? And which railroads seems to have a lot of them?
Thank you

BNSF 1551 is, as far as I know, still running around Balmer Yard in Seattle switching the hump yard. It's a SD9-3, originally built in 1954. Has a low nose, instead of the high nose it originally had. I read that 4 of these are still in use, numbered 1550-1553.
Pics: http://www.rrpicturearchives.net/Locopicture.aspx?id=126419

That is not an easy question. For instance, BNSF is using diesels whose frames, carbodies, and trucks are over 50 years old; but the "guts" of the units (diesel engines, traction motors, electrical systems, braking systems, etc) units have been rebuilt, replaced, upgraded, modernized, etc. The railroads used to do rebuilds and upgrades in their own shops, but now many contract that out to companies which specialize in rebuilding old units to meet modern performance, safety, and emissions standards.

There are short lines and regional railroads which are still using unmodified road engines which date back to the '60's and/or switch engines that are even older than that. For mainline freights, most class I railroads are using modern diesels or diesels which have been rebuilt to modern standards. Computers revolutionized motive power technology and class 1 railroads want modern engines with the latest technology for maximum performance and fuel efficiency, to meet Federal emission standards, and to link up with modern satellite oriented telecommunication and signal systems.
Last edited by a moderator: Dec 1, 2014

One other comment on older engines. If there are some in a multi-unit lashup, they may not used as the lead engine due to the issues I mentioned above. Does anyone know if union-railroad labor agreements mandate the use of comfort cabs when available?
M

punchy71 said:
Greetings,
I was wondering if someone could tell me which diesel locomotive models are some of the oldest continously serving to see regular duty even in today's railroad environment? And which railroads seems to have a lot of them?
Thank you
Click to expand...

Yesterday I saw a B Class hauling a freight train in Victoria Australia. It was the B80. It looked incredibly shabby and unloved. The B80 turns 65 years old on the 9th October 2018. As I was driving on the highway, I couldn’t quickly pull over to take a photo. I wish I had now.
I found a photo of it with the newer paint job on the www.
The dark blue and gold was the original colours in the 50s. 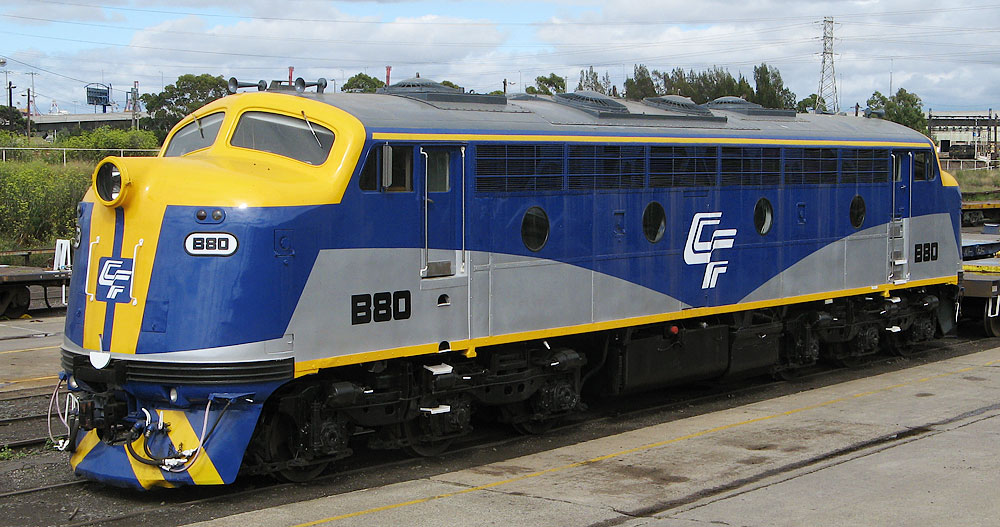 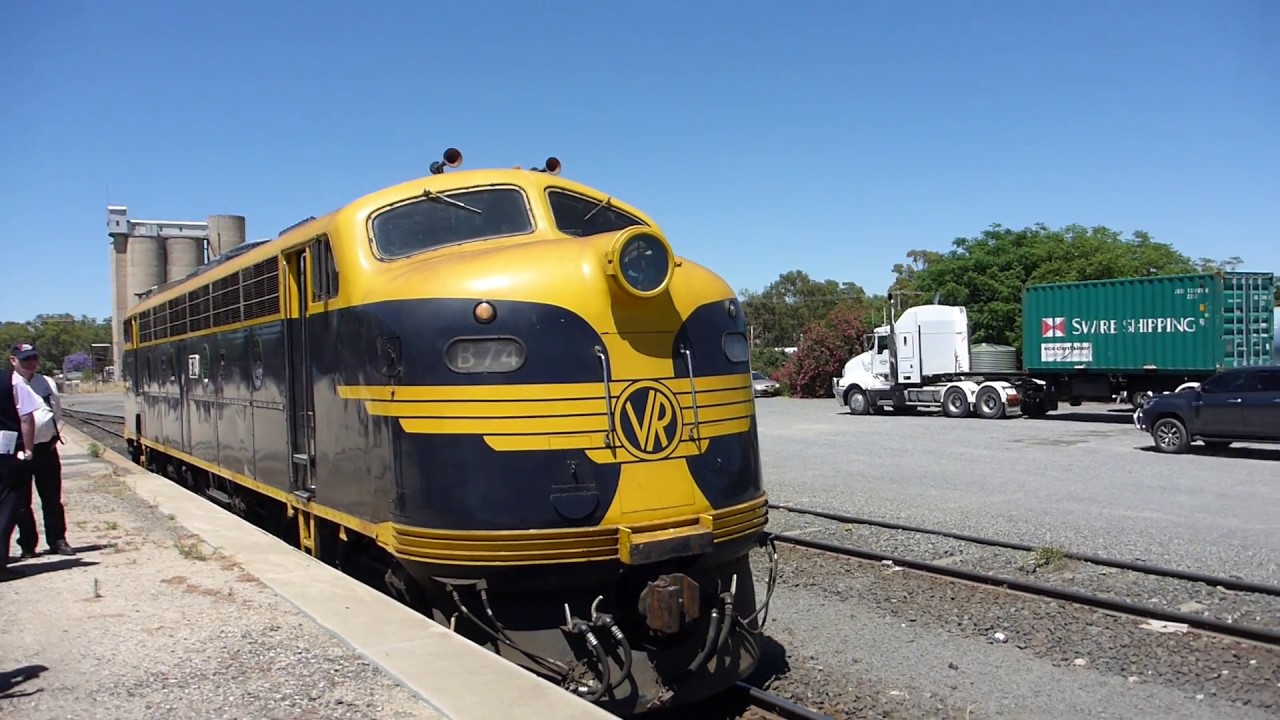 White Pass & Yukon has diesel locomotives #90 and 91 in service from 1954. Recently repowered.

BNSF has several GP and SD locomotives from 1954:
https://www.thedieselshop.us/BNSF.HTML

You can look up your favorite RR in the Diesel Shop's listings.

While driving on I-5, I have seen old switchers serving grain elevators on the BNSF Portland-Seattle mainline south of Kalama, W. I don't know if the switchers are owned by BNSF or the elevator company. They are painted in BNSF colors and look like some of the old switchers lettered GN that I have seen in diesel consists of freights passing through Edmonds.

Mick’s Sister said:
Yesterday I saw a B Class hauling a freight train in Victoria Australia. It was the B80. It looked incredibly shabby and unloved. The B80 turns 65 years old on the 9th October 2018. As I was driving on the highway, I couldn’t quickly pull over to take a photo. I wish I had now.
I found a photo of it with the newer paint job on the www.
The dark blue and gold was the original colours in the 50s. View attachment 88552
Click to expand...

Good news for those of us that love the old style "cab" units from the 1940's and 50's. If it is still in service, can you return and get some photos of B80 around its 65th birthday?
E

The oldest operating diesel in the US is probably Delaware, Lackawanna & Western 426, one of two switchers built by Electro-Motive Corporation in 1935, prior to official introduction of the pioneering SC model. These experimental prototypes were the first endcab switchers produced by what later became EMD, and are the basis of a model line which would evolve into the popular SW1 in 1939. Concurrent with production of the SC, which stood for Six hundred hp, Cast frame, was the SW, standing for Six hundred hp, Welded frame. Both were built by EMC from 1936 to January, 1939, when the SW1 replaced them in the catalog. Allentown & Auburn 206 is an SW model, built as PBNE 206 in 1937 and probably the second oldest diesel currently operating.

The oldest operating Alco diesel I know of is Northern Illinois & Wisconsin (NIWX) 603, nee-DL&W 409, an HH660 built in 1940 that has labored for decades at the Port of Indiana, Burns Harbor.

There are no surviving examples of many early streamlined passenger and freight locomotives produced in the 1930s, 40s and 50s, but the oldest still in operating condition are an EMC E3 built in 1939 as Atlantic Coast Line 501 and preserved at the North Carolina Transportation Museum in Spencer, and an EMC E5 built in 1940, CB&Q 9911, at Illinois Railway Museum in Union. Three other early "shovelnose" E-units exist, an EA and two E6's, but do not operate. Three pioneering CB&Q Zephyrs and the B&M Flying Yankee of 1935 exist, but do not run. Just one E7 exists, at the Pennsylvania State Railroad Museum, but it is inoperable. There are still quite a few E8 and E9 locos, but the last in service on a major railroad are the ABA set of rebuilt E9s operated by Union Pacific's heritage program.

The EMC 103 "FT"streamliner that introduced the famous "bulldog" nose used on all EMD F-units and the E7, E8 and E9 passenger models is preserved at MOT in Kirkwood, MO, but does not operate. There are many operational F7s and a few F9s, but the oldest operating F-units in original configuration are the 1948 former Bangor & Aroostook EMD F3s at Steamtown, which at times operate with a F7 B-unit modified to look like an F3B.

None of the early Alco DL-107/109 survived, but the last four Alco PA-1s, built for Santa Fe in the late 1940s and saved from the scrappers by the Delaware & Hudson in 1967, still exist, though one is in wrecked condition. One is at the museum in Portland restored in the guise of Nickel Plate Road 190, another is being restored as Santa Fe 59L at MAR in Frisco, Texas. The other two are at a museum in Mexico. Only one is fully operational but two of the others are.

There are no streamlined Alco freight units from the pre-1960 era in unmodified condition, as all 19 existing units were converted to control cab/Head End Power units for the Long Island Railroad around 1971. Of those, I believe 14 still exist and are in various stages of preservation/restoration after retirement and dispersal by the LIRR. Similar Canadian-built MLW FPA-4s still operate on the Cuyahoga Valley Scenic Railway and the Napa Valley Wine Train.

Just two Fairbanks-Morse streamlined cab units still exist, both C-Liners of the 1950s, and both are in Canada. The shells of a few B-units also exist. Finally, just two of the streamliners produced by Baldwin exist in the US, two ex-New York Central RF-16 Sharknoses that were saved from the scrapper first by the Monogahela Railway in 1967, again by the D&H in 1974, by John Kunzie in 1978 and finally by E&LS owner John Larkin in the 1990s. They are out of service and have been in locked in storage for three decades after. Two streamlined Baldwin RF-615E export units still exist in Argentina, one restored and the other derelict. 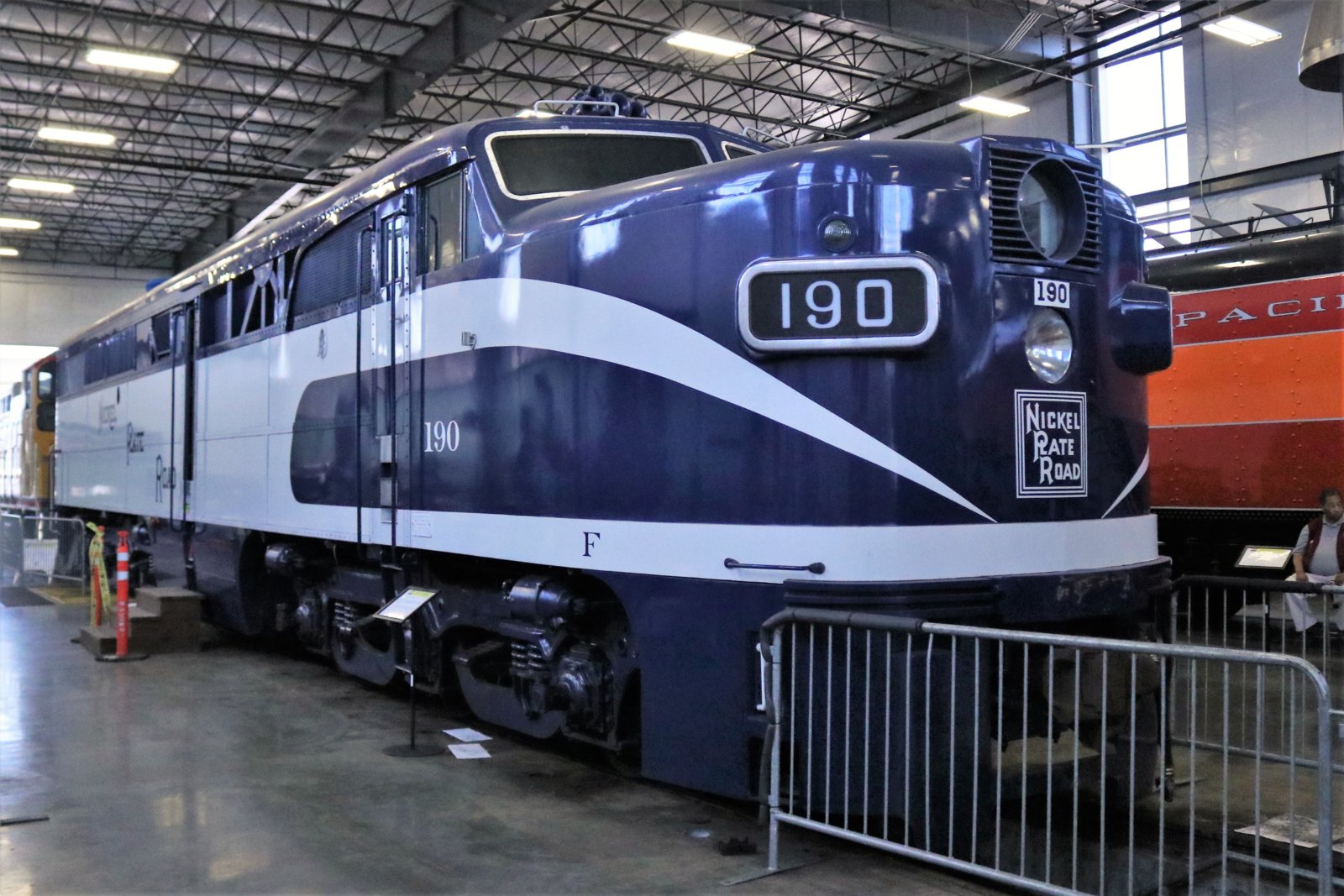 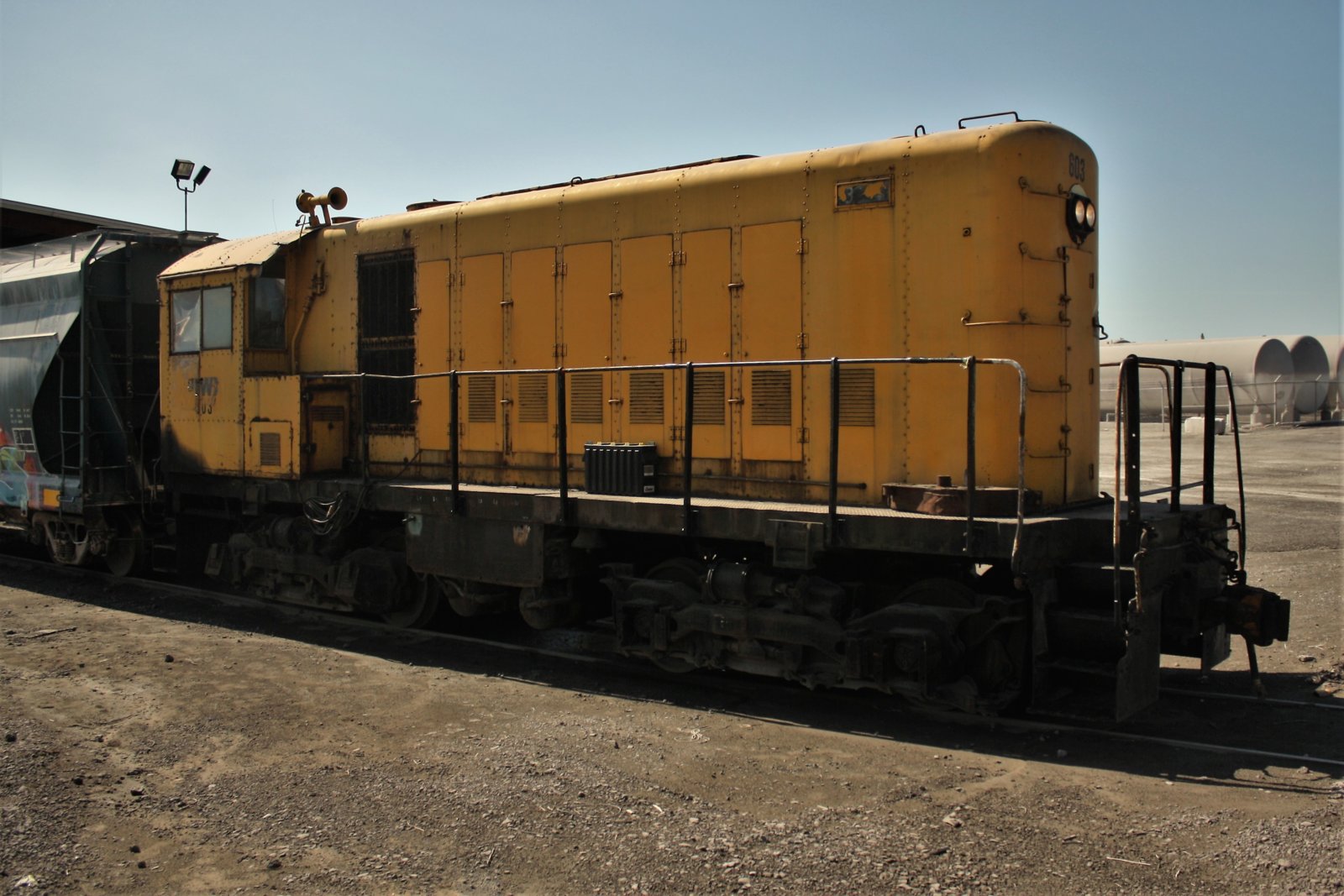 punchy71 said:
Greetings,
I was wondering if someone could tell me which diesel locomotive models are some of the oldest continously serving to see regular duty even in today's railroad environment? And which railroads seems to have a lot of them?
Thank you
Click to expand...

I think I misread your question originally. I gave you the oldest operating diesels, but for "regular duty" on major railroads, it's a different story. The real oldies are mostly on shortline operations, like SMS with its Baldwin fleet in Swedesboro, NJ, Dardanelle & Russellville with 1940s EMD's and the A&M Alcos in Arkansas, the Alco fleets of the Delaware-Lackawanna and upstate New York shortlines, and a few others.

But for day in, day out mainline railroading on a Class One, BNSF is probably your best bet. In addition to rostering three rebuilt First Generation EMD SD9(-3)s, they have a large fleet of rebuilt GP30s and GP35s. The ones with basically intact carbodies are classed as GP39E, GP39M, GP39V or GP39-2, whereas the most recent GP39-3 program replaces the cab and forward roof blister section. These units were originally built by EMD in 1961-66. Pictured are GP39-2 BNSF 2818 and GP39-3 BNSF 2551, both rebuilt GP30s. 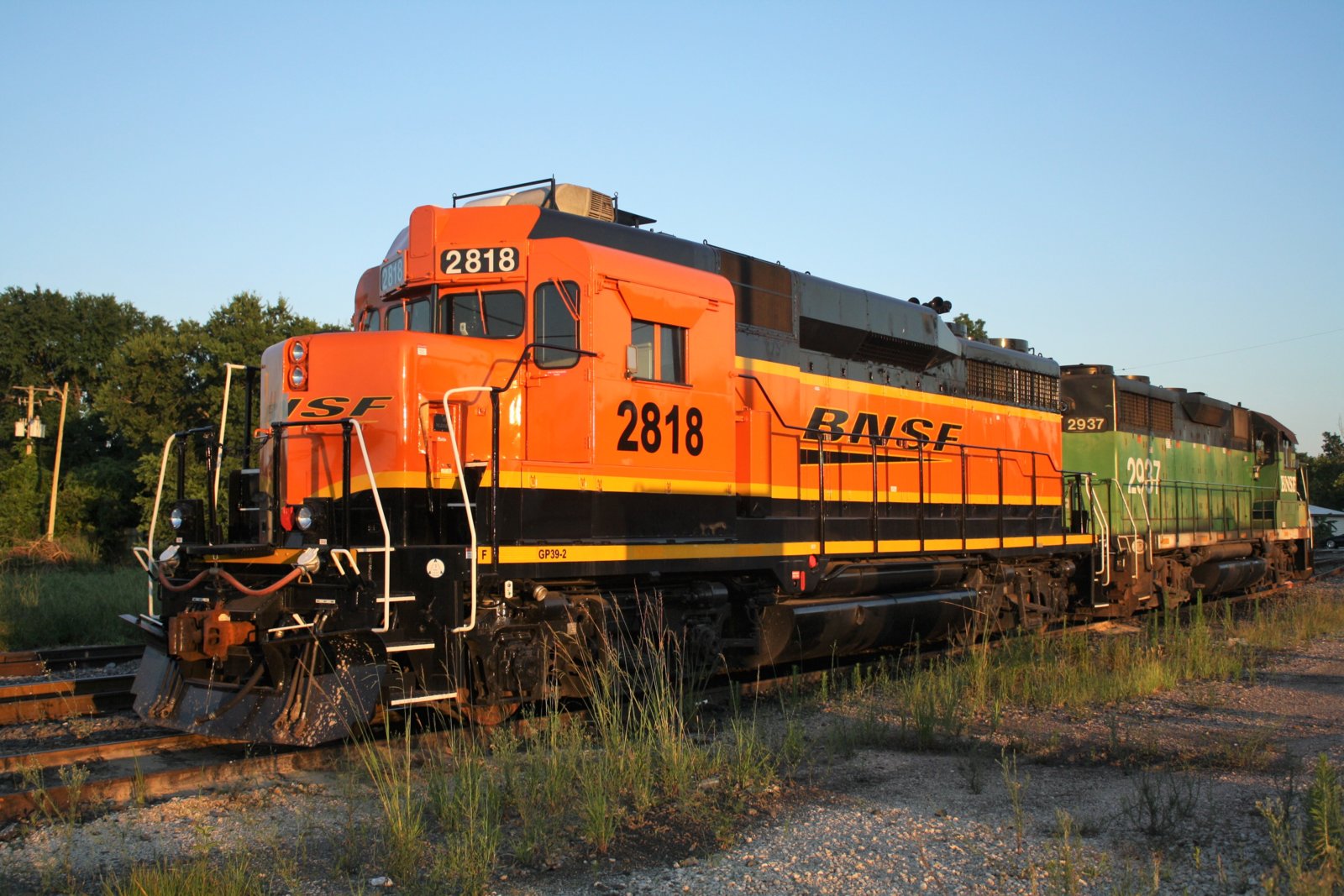 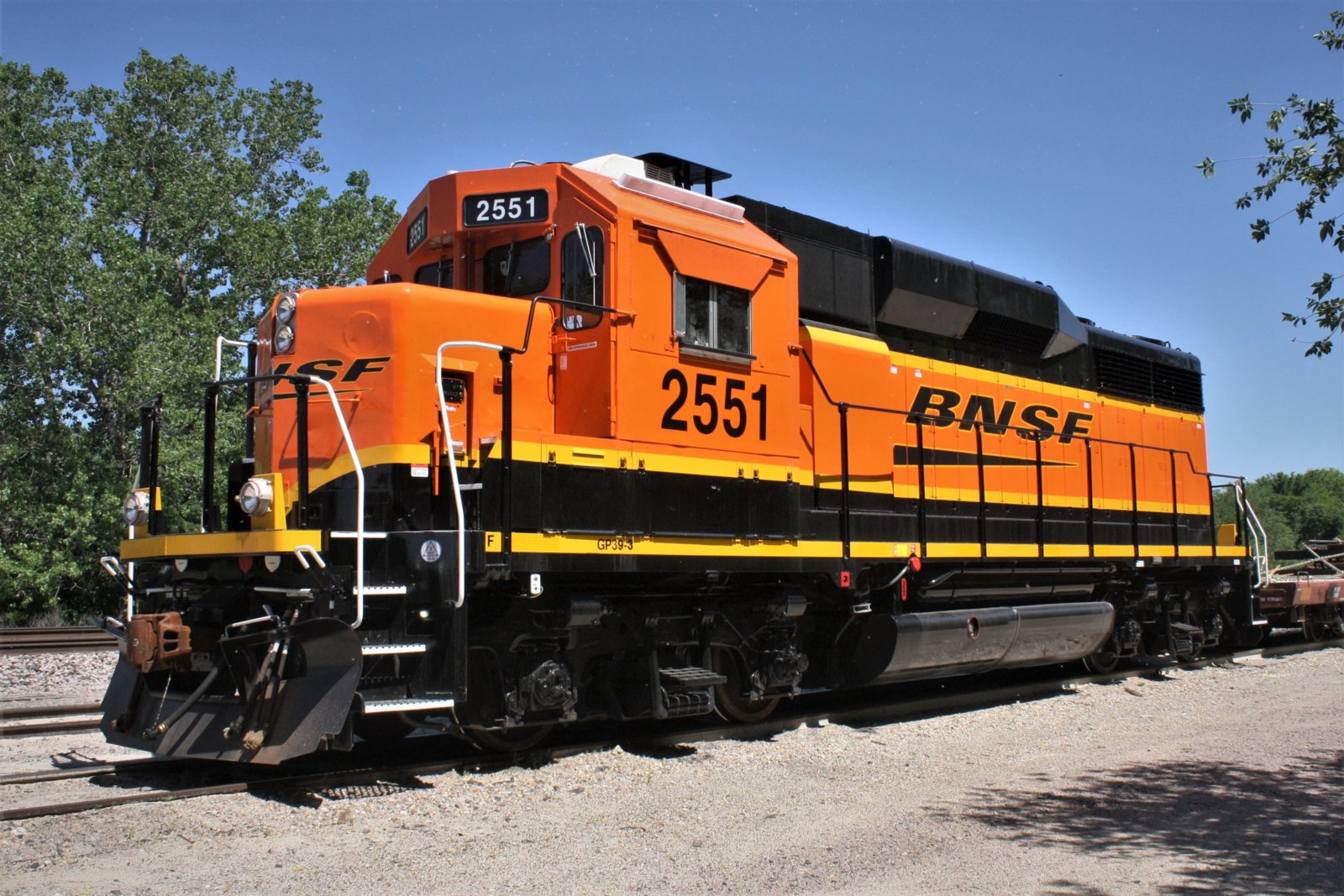 If you check my Trains of Edmonds, WA. thread in the Western US section, you will see lots of diesels from the 60's, 70;s, and 80's that continue to roll along Puget Sound, albeit in rebuilt/upgraded form.
M

Mick’s Sister said:
Yesterday I saw a B Class hauling a freight train in Victoria Australia. It was the B80. It looked incredibly shabby and unloved. The B80 turns 65 years old on the 9th October 2018. As I was driving on the highway, I couldn’t quickly pull over to take a photo. I wish I had now.
I found a photo of it with the newer paint job on the www.
The dark blue and gold was the original colours in the 50s. View attachment 88552
Click to expand... 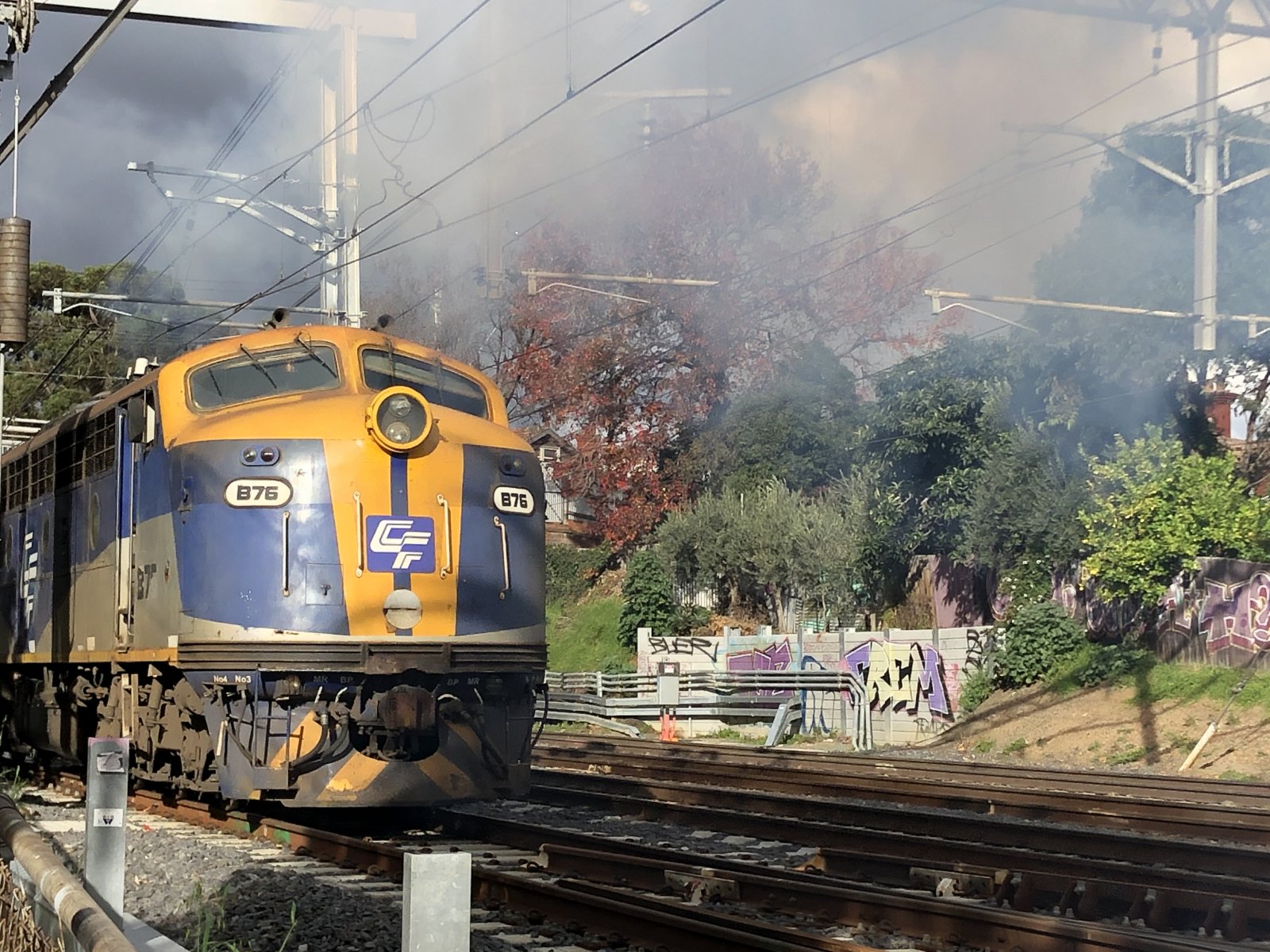 B76 in livery of Chicago Freight Car Leasing Co sighted at Hawksburn Melbourne in June 2020.
67 years of continuous service! Having a " streamlined drivers cab at each end" this is a photo of B76 departing in a cloud of smoke.

Thanks for posting. I miss the old streamlined diesels I regularly saw as a kid back in the 50's.
The last ones I recall seeing in regular class I freight service were the Western Pacific's "Fab Four" F7A's in Sacramento, CA back in the late 70's or early 80's. A nice engineer even let me sit in the cab of one leading a freight that was stopped in the South Sacramento yard.

I knew I would forget something. In the late 80's-early 90's I saw BN (former CB&Q) E units powering commuter trains on the BN triple track main line between Aurora and Chicago. The units were in the BN passenger paint scheme.