Staff member
All Metrorail service will be suspended Wednesday, March 16, for emergency inspections


Metro General Manager/CEO Paul J. Wiedefeld, with support from the Authority's Board of Directors, today announced the full closure of the Metrorail system on Wednesday, March 16, for emergency inspections of the system's third-rail power cables following an early morning tunnel fire yesterday.

The inspections of approximately 600 "jumper cables" will occur along all tunnel segments on the Metrorail system. At the conclusion of the inspection process, there may be a need for additional rail service outages. Any further service impacts will be announced to the public as soon as they are known.

"While the risk to the public is very low, I cannot rule out a potential life safety issue here, and that is why we must take this action immediately," Wiedefeld said. "When I say safety is our highest priority, I mean it. That sometimes means making tough, unpopular decisions, and this is one of those times. I fully recognize the hardship this will cause."

The Metrorail system will close at its normal time tonight (midnight) and remain closed until 5 a.m. Thursday. All six Metrorail lines and all 91 stations will be closed on Wednesday.

The unprecedented action follows an early morning electrical fire involving a cable in the tunnel outside McPherson Square Station yesterday. There were no injuries; however, service was disrupted along the Blue, Orange and Silver lines throughout the day.

“The investigation into yesterday’s cable fire at McPherson Square is ongoing," Wiedefeld said. “As a preliminary matter, the conditions appear disturbingly similar to those in the L’Enfant incident of a year ago, and our focus is squarely on mitigating any risk of a fire elsewhere on the system.”

Metrobus and MetroAccess service will continue to operate on a regular schedule. Limited, supplemental Metrobus service will be provided between Pentagon and Downtown DC (Franklin Square). Parking will be free in all Metro-owned lots and garages for customers who wish to take bus or carpool.

Alternate service options throughout the region will be extremely limited, and severe crowding is expected on buses. Consider the following alternates:

The public is advised to make alternate travel arrangements as early as possible.
News release issued at 4:35 pm, March 15, 2016. 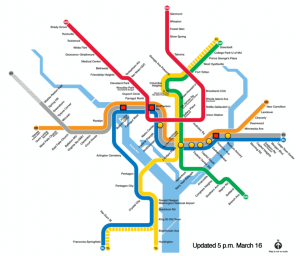 A Metro map showing the locations identified today where power cables were in need of replacement or repair.
Metro General Manager/CEO Paul J. Wiedefeld today announced plans to restore service on Metrorail following an unprecedented full closure of the Metrorail system on Wednesday for emergency inspections of the system's third-rail power cables.

As of 5 p.m., Metro crews have completed the inspection of 80 percent of approximately 600 “jumper cables” located in 22 underground zones throughout the entire Metrorail system. Crews have identified 26 areas where damaged jumper cables and connector boots needed to be replaced.

Of those 26 areas, 18 cable repairs have been made. Crews will continue to work through the night to complete the remaining repairs.

“I know that today presented a hardship for many throughout the region, but I want to emphasize that this shutdown was indeed necessary,” said Metro General Manager and CEO Paul J. Wiedefeld. “I want to thank everyone for their patience and support in putting safety first.”

Following these repairs, Metrorail service will resume tomorrow at 5 a.m. on a normal weekday schedule. However, if additional track repairs are needed, Metro will announce the areas that are in need of repair as soon as they are known, resulting in potential impacts to Metrorail service in those areas.

Beginning at midnight on Tuesday, a team of electricians and cable construction crews walked through 100 miles of tunnel inspecting for defects in jumper cables, connecting boots that were damaged or improperly positioned, water infiltration, and debris that could burn near cables.

Highlighted on the above Metrorail map are areas that were identified for immediate repairs, as well as those that will require repair on a non-emergency basis. Repairs that do not require immediate action will be scheduled after normal service hours.

The areas indicate where inspection teams found some or all of the following conditions: damaged cables, damaged cable connecting boots, debris encroaching on electrical areas and water infiltration.

While these findings do not indicate that cable fires were imminent, these conditions are hazardous and increase the risk of fires on the tracks.

“Throughout this intense inspection deployment, our focus has been on effectively mitigating fire risks,” said Wiedefeld. “We are being as clear as we can about what actions we have taken so that customers and employees feel safe as they ride Metro tomorrow.”

Metro’s Safety investigators are reviewing the history of the damaged boots and cables, and all findings will be shared with Federal Transit Administration (FTA) and National Transportation Safety Board (NTSB). Investigators will then review inspection records, age of materials and maintenance records to identify any
procedures that were not followed or standards that were not met.

The suspension of Metrorail service on Wednesday followed an early morning electrical fire involving a cable in the tunnel outside McPherson Square Station on Monday, March 14. There were no injuries; however, service was disrupted along the Blue, Orange and Silver lines throughout the day.
You must log in or register to reply here.
Share:
Facebook Twitter Reddit Pinterest Tumblr WhatsApp Email Share Link