Trespassers and the BNSF Rosario Local!

Normally the Rosario local goes north from Albuquerque on Sunday, but April 1 was Easter so it made the trip the next day. After hearing it on the scanner starting it's return to Albuquerque, I went track side to catch it. BNSF 2024 and 1714 lead two empty asphalt cars back to Albuquerque.
In February, 1714 led 1609 back from Rosario with a train of empty asphalt cars.
People trespass here everyday because the tracks run through the middle of Bernalillo with most businesses being on the west side and a residential area on the east. Since two trespassers were killed in recent years, speed has been restricted to 40 mph through town. I'm sure that has saved a lot of lives, but people continue to trespass. We hear the audio of the crew reporting the trespasser walking down the tracks.
Two days previous, Amtrak had to stop because someone had passed out on the tracks.

For some reason, Railroad ROWs attract trespassers like magnets attract metal. Sometimes the railroad is the most direct route, other times, it's a way of avoiding detection. However, there is always a danger that the trespasser will be killed or seriously injured. Believe it or not, there are locations on the Northeast Corridor, in New Jersey, where the High Speed ROW is fenced in, and the fence is frequently cut to allow trespasser passage.

The most memorable trespasser episode from my 42 year railroad career, was a pre dawn incident where a elderly man drove his vehicle on to the Hightstown Secondary, in NJ, and collided with our standing locomotive. It was most interesting to hear his explanation to the police, that he always used the tracks as a shortcut from the Convenience store to the Senior Citizen Housing development, where he lived. He never encountered a train in his way before. You can't make this stuff up.

Boris said:
It was most interesting to hear his explanation to the police, that he always used the tracks as a shortcut from the Convenience store to the Senior Citizen Housing development, where he lived. He never encountered a train in his way before. You can't make this stuff up.

WTH? Were the tracks buried in rock or something? Even if you don't encounter a train, driving down the track would beat the crap out of your rig. Heck, it's hard enough to do with a backhoe or loader! I can't imagine what it would do to somebody's sedan.

The rail at that location was 100psi stick rail, the surface was cinder with some stone, and there was about an 8" - 12" drop off off the 4 lane highway that crossed the railroad then turns to the right and runs parallel to the railroad separated by a stand of trees. The entrance to the 55+ Housing development was the first left after the crossing. I don't believe that this was his short cut, but that he became confused and turned too quickly. He had to have damaged the underbody, the tow truck had difficulty getting in there to remove his car from the track. The reason he gave the cop was hysterical at the time, I couldn't stop laughing. In retrospect, now that I'm older and wiser, I understand how he could miss the turn.
The drivers in that part of Jersey were / are nuts. The Engineer on the other local covering the Amboy Secondary, had 17 crossing accidents in a six year span. I was lucky, this was my only encounter with a vehicle, since my Hostler days in Wilmington, so it was memorable.

This was the second car to have been driven onto the light rail tracks in Queensland Australia since it was opened. Got 500 meters from the road crossing it entered from 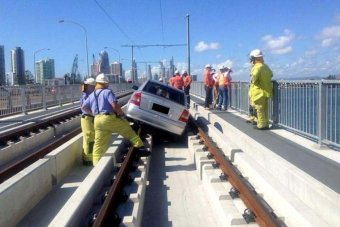 We have had a few incidents in Edmonds where drivers turned on to the tracks after crossing Dayton St.

tootnkumin said:
This was the second car to have been driven onto the light rail tracks in Queensland Australia since it was opened. Got 500 meters from the road crossing it entered from
View attachment 85840
Click to expand...

It's fairly easy to understand on light rail tracks, they intersect city streets, and are often in pavement. That's a somewhat easy mistake to make.

However... I want to know how they got 500 meters if the whole thing looked like that. Were they driving on top of the rails or what?

Dude, sorry about your car!... BTW, here's an application to be a driver in the Joey Chitwood Auto Thrills Show, they can use a man with mad skill like yours! (If you remember Joey Chitwood, you're old, LOL!)

Bill Anderson said:
We have had a few incidents in Edmonds where drivers turned on to the tracks after crossing Dayton St.
Click to expand...

When it becomes a pattern, that tells you that they at least need better signage, and possibly a road redesign. Once or twice is a fluke, but when it happens on a regular basis? Something is confusing the drivers.

Well, I can see the problem. There's a road right next to the tracks, and the intersecting road is at a sharp angle. It wouldn't be too hard to cut the corner and end up on the tracks. On a dark and rainy night (very common in Seattle during winter) I can see somebody getting confused. Looks like they've put in some "candlesticks" on the right, but it still leaves a margin of error. It would be easy to mistake that yellow curb on the road parallel to the tracks for the yellow center line of the road. So you go to the right of that, and "Hey, why's Amtrak driving down this stre... KRUNCH!" 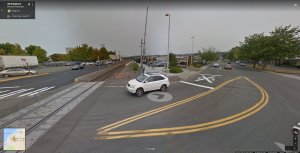 I suspect that two of the drivers may have been suffering from dementia or other mental impairments as they failed to realize how serious their predicament was.
Last edited: Apr 11, 2018

Bill, I think some sort of judgement impairment was the case with the one I showed. That track section is on a bridge, so the track before there was probably somewhat less difficult to traverse. Must still have had the foot down to get that far along even so.
You must log in or register to reply here.
Share:
Facebook Twitter Reddit Pinterest Tumblr WhatsApp Email Link