The first of nine new SOUNDER Commuter train cab cars has arrived from Thunder Bay, Ontario and is at the Amtrak Yard in Seattle, WA. Here, they will receive final assembly of electronics and extensive testing leading to certification for SOUNDER Commuter service. Notable changes over previous cab cars is the removal of the front door, improved view out of a large, one piece front window, improved crash protection, higher seating for engineer and conductor by about 4 feet, electric doors vice air operated and seamless assembly compared to the exposed screws on the older cab cars. The large white SOUNDER decals still need to be applied on both sides. SOUNDER Commuter service runs between Lakewood and Seattle, plus Everett and Seattle. These new cab cars will, for the most part, only run on the south line between Lakewood and Seattle due to the more railroad crossings and higher speeds of trains on that section. All of the new cars are expected by the end of next month and they should all be in commission by the end of September. 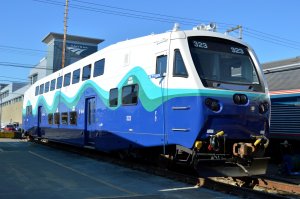 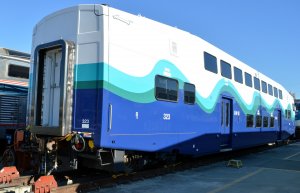 Thanks for posting. Too bad I won't see them up north. Is the number of Sounder trains expanding or are existing runs just being extended south to Dupont once the new line is put into passenger service?
D

I've been trying to spot this unit in the Amtrak yard when I come in on Sounder 1502 in the morning. I like them much better than the existing cab cars. Hope the operator will find it better to work in compared to the cramped and low booth of the existing design.

I suppose they'll replace the existing cab cars, which will then be added to the additional trains scheduled to start running in the Fall. Somewhere in there the trains may go to 8 passenger units, depending on if all the stations can accomodate the extra car. By the time my train reaches Kent nearly all of the seats are filled, but I haven't seen any standing room only runs.

The plan is to go to 10 cars in a few years. ST is in the process of ordering more cars for that. The engineering for lengthening the platforms is an ongoing process that was started years ago.

Cab car 322 showed up yesterday. It's facing south. The mid day train will go from 2 to 7 cars and will need to use some of the old cab cars as coaches. I'm sure some way we will get a new cab car up north just like the MPI40's made it up there. Anyway, all of us have to be trained on the new cabs, just in case.

The new cab, 323, is over at the end of track 8 right next to S. Holgate St. but it's behind the other SOUNDER cars that are having their regular maintenance done, which are on track 7, so you can only see the very rear of 323 from the mainline, at a fleeting glance, at 50 mph.

Bill Anderson said:
Thanks for posting. Too bad I won't see them up north. Is the number of Sounder trains expanding or are existing runs just being extended south to Dupont once the new line is put into passenger service?
Click to expand...

You're welcome. More south trains this fall. The schedule will be out next month. DuPont is probably in 2024 or later since no studies have been started for new station locations that I know of.

BNSFEng said:
You're welcome. More south trains this fall. The schedule will be out next month. DuPont is probably in 2024 or later since no studies have been started for new station locations that I know of.
Click to expand...

So the upgrading of the Ft. Lewis line is strictly for Amtrak at this point?

Bill Anderson said:
So the upgrading of the Ft. Lewis line is strictly for Amtrak at this point?
Click to expand...

Not exactly, since we may pass Amtrak trains on the new double track this fall between Lakewood and South Tacoma that both of us can use. That section got the upgrade to double track in addition to the improvements from Lakewood to Nisqually.

Watch for a test train during the daylight hours on the Seattle and Lakewood subs next week and probably the week after as a 7 car SOUNDER train, with new cab car 323, will be conducting acceptance testing.

Yah, I run in down in the mornings, it was up for training. We have to spot differently due to the door stations are on opposite sides A end right side and then B end left side, although there are no hand brake on these cars. It's controlled by two different methods: air valve back near the B end or electrically with a switch in the cab section.
You must log in or register to reply here.
Share:
Facebook Twitter Reddit Pinterest Tumblr WhatsApp Email Link