I am looking for information and photographs of Stemmer's Run station. A station that was built around the early 1900's. It is located at mile marker 87 on the NEC and is about 8 miles outside of Baltimore City, Maryland. It was used possibly by the Philadelphia, Wilmington and Baltimore railroad. It was used for sure by the Philadelphia, Baltimore and Washington railroad and later by the Pennsylvania railroad.

There were two structures , a wood two story house structure which I have only seen as a sketch in Charles P. Dares "The Philadelphia, Wilmington and Baltimore Railroad guide book" published in 1853. The other is a one story brick structure that still stands (barely) which I have only found two photographs, one in black and white and the other in sepia. The b/w has the classic red and gold keystone sign, while the sepia has a "green background and rounded edges. I still have not figured out any information about the rounded edge sign.

Thank you for your time,

I found photos of Stemmers Run Station in my grandparent's photo album. This one has my Aunt Margaret sitting in a buggy out front of the station. She is about two years old here which makes it approximately 1906. The notation with the picture states that the others in the buggy tend the station, apparently family friends! Last name of attendents to station is Sinclair! 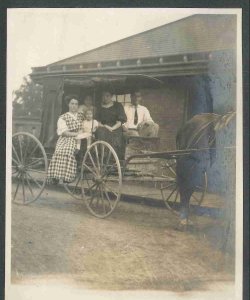 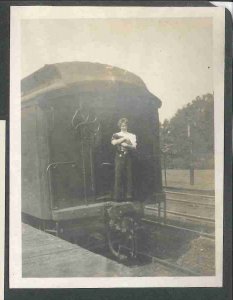 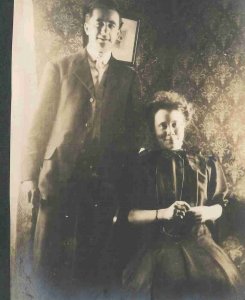 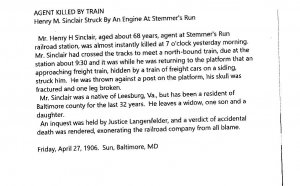 Given the notation in my old photo album of 'Sinclair' being the caretaker of the station, I went to the 1900 Census. There was Henry (62) as head of house, wife Ida (39) , daughter Zilla and son Henry V. Further searches led to this newspaper article about Henry and the reference to him being killed at Stemmers Run Station. WOW. What a shock. This picture had to be taken very soon before his death in his home near to the station where he worked.
You must log in or register to reply here.
Share:
Facebook Twitter Reddit Pinterest Tumblr WhatsApp Email Share Link