[RO] Summertrip to Romania with german and romanian railcars (Part 2)

here is part 2 of our summertrip.

The weather would be bader the next two days, but we do our best to take good photos from the railway Titan Sud (Bukarest)- Oltenita. The railway condition was very good for romanian conditions. 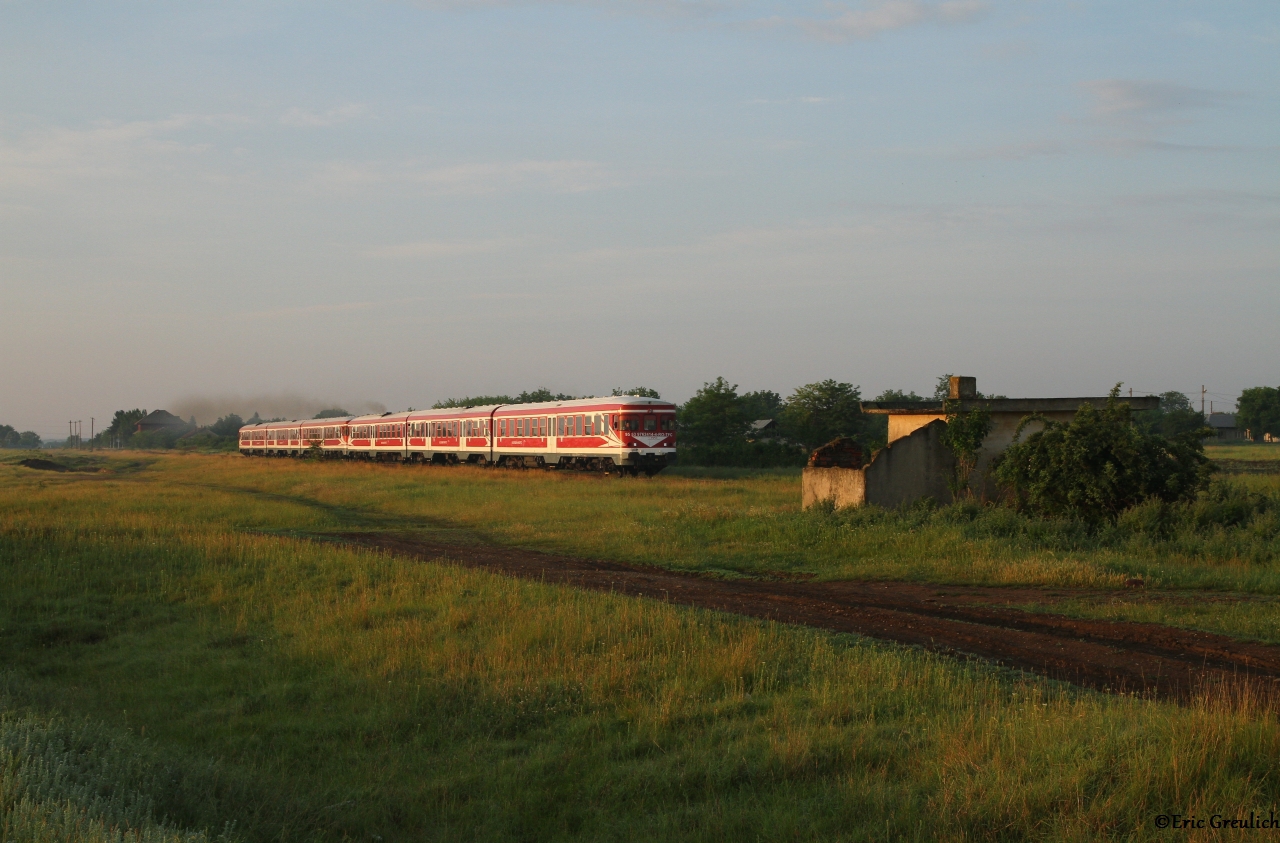 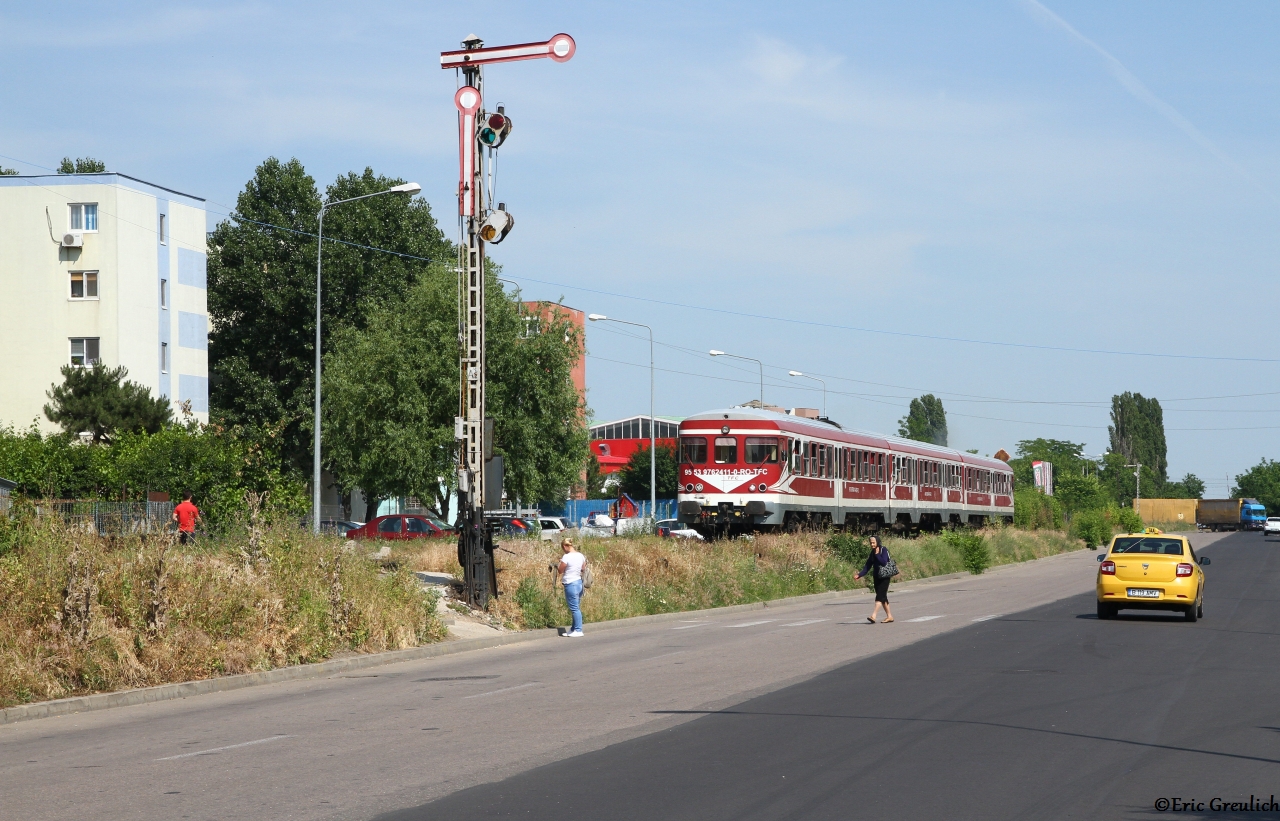 A lot of photos will be destroyed by clouds, in the evening, we can get a sun-picture in Bukarest. 76 2411/2412 with R15192 from Oltenita to Titan Sud between Bucuresti Sud and Titan Sud.

For the next day, the weather-report forecast bad weather. So we decided to take the train on the next day. We found a good hotel near the Autobazar (That is like a fleamarkt for cars). Our room was in a good condition and the shower is waterproof. That was rarely the case in hotels in Romania.

The weather-report was right, it was very cloudly on this day and we drive to the station Titan Sud. Before we started our railway-trip, we buy our breakfast in a typical small supermarket. The tickets for the train cost us around 4 Euro per person to Oltenita and back. The train was very full, but we get a good place at the end of the train. 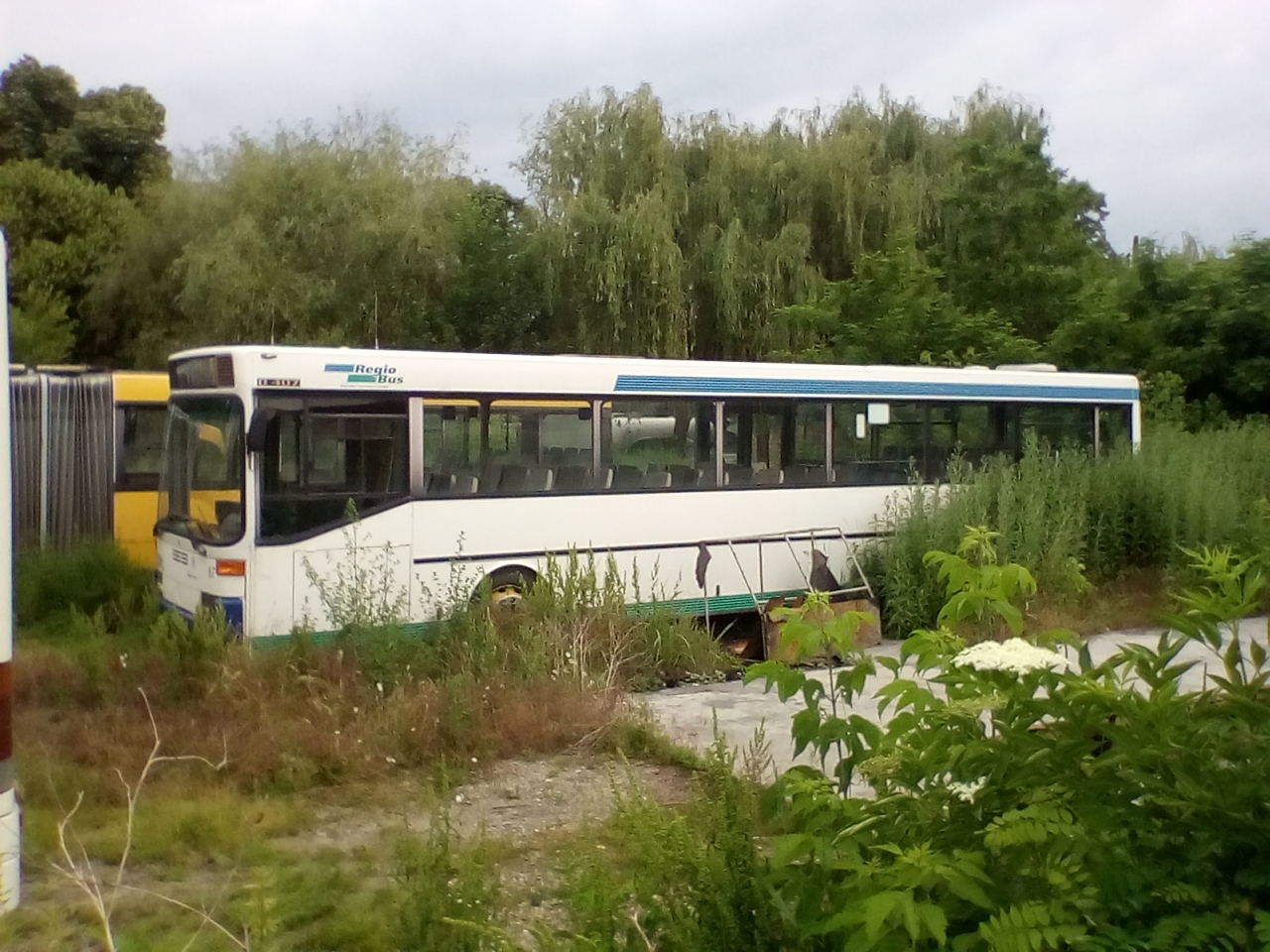 In Oltenita near the station I found something from my homeland. A old bus from Hanover (RegioBus was the operator for buslines around Hanover).

On the way back I checked the clouds on the radar and toward the sea, it looks not bad. In Oltenita we want to drive to our next destination. A long secondary railway from Medgidia to Tulcea.

We was just in time on the first photo-point. No clouds around us, best condition for a good photo. But there was a plane over us. The contrails was in front of the sun and destroy the photo. I have never experienced something like that. We followed the train and get him after a long damaged route again Mihai Viteazu . 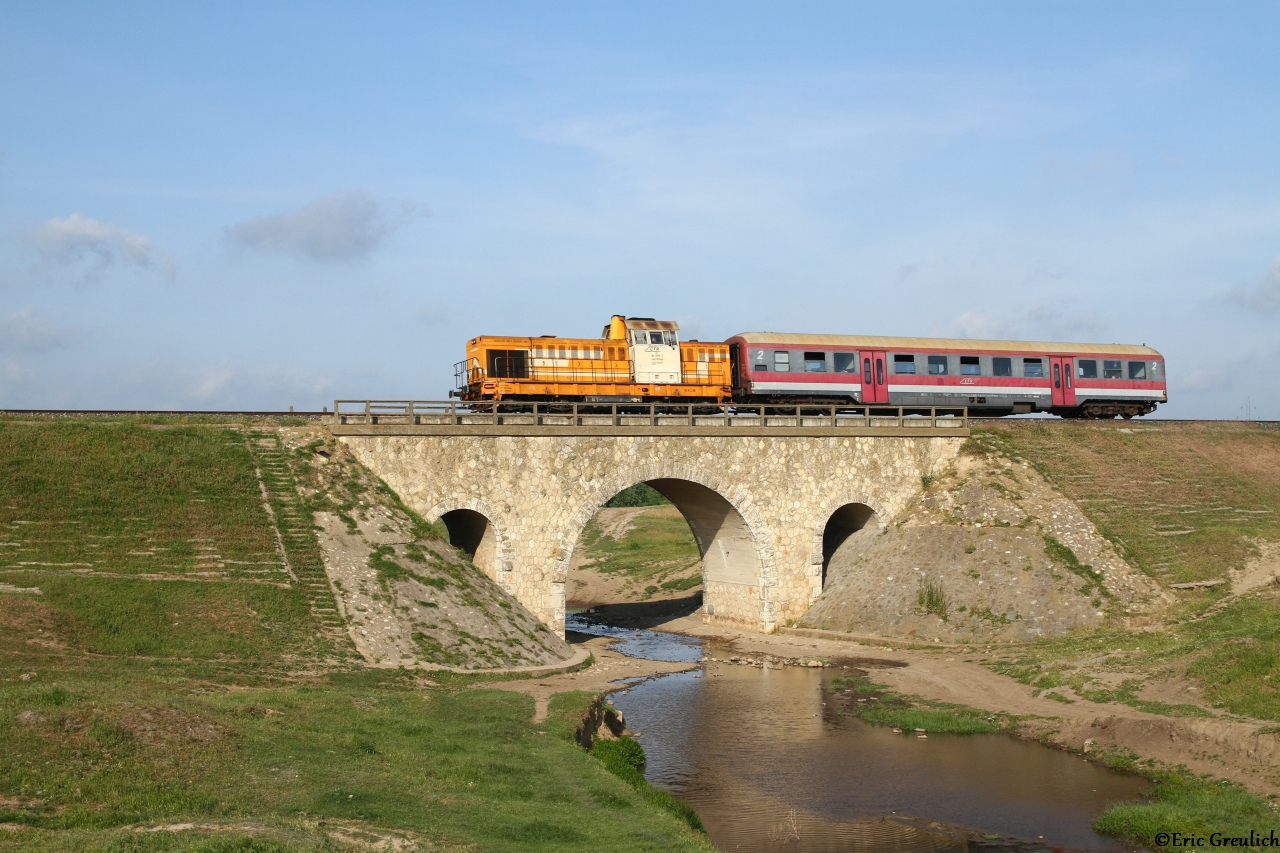 One of the two railcars must be damaged, So drove the 82 0374 with a passenger car as a replacement. That was the local train from Medgidia to Tulcea. 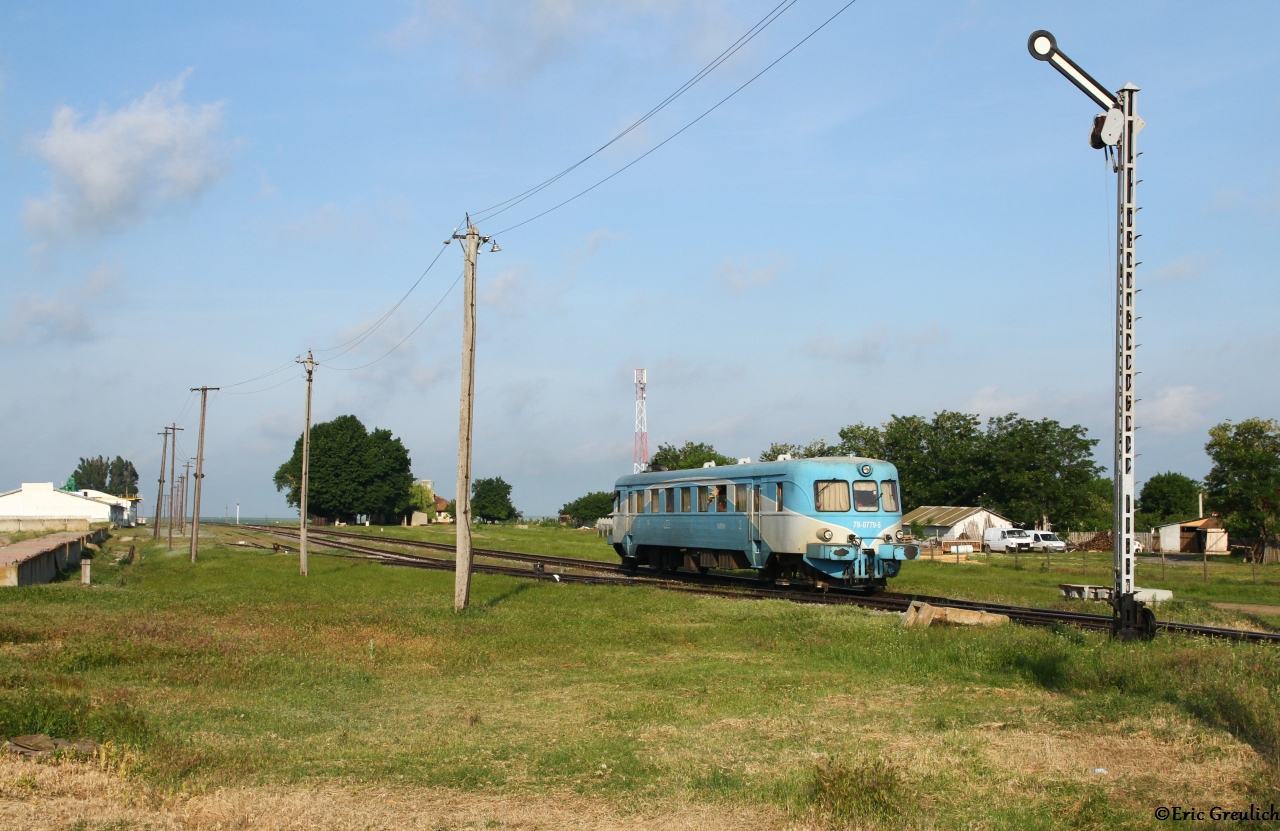 We found a nice hotel in Babadag with a good restaurant.

This morning was bader than the weather-report says. It was foggy outside, but we started to our first photopoint. There was a big bridge near Targusour. Only two local trains per direction operated daily on this railway. In the morning and in the evening. 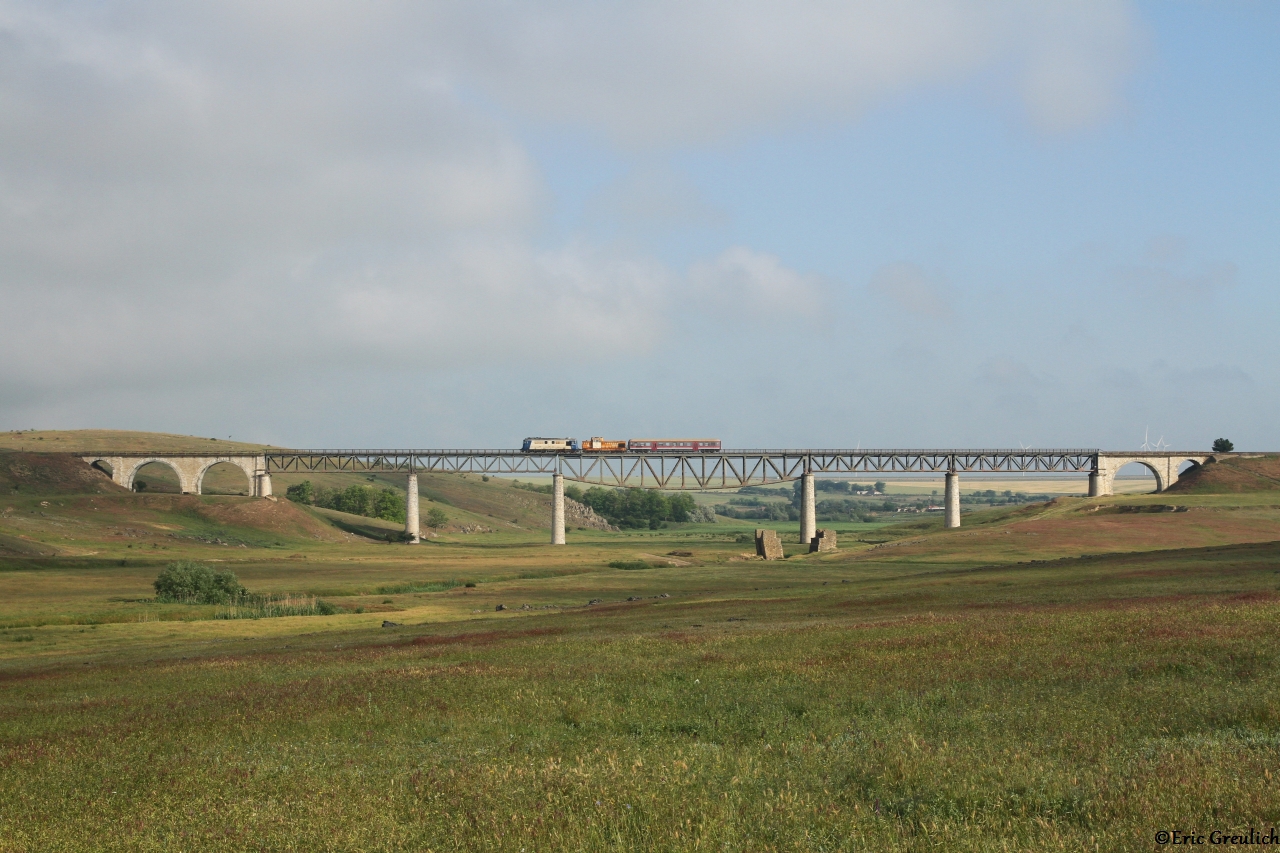 In the last moment, the fog disapeard and the local train from Tulcea to Medgidia crossed the brigde. A unknown class 60, 82 0374 and a passanger-car.

We follow the train, to get him again after Targusour, but the road was a catastrophe. Big hole´s in the street and dust complicated the persecution. And then that happened, which I absolutely wanted to avoid. I had overlooked the last pothole. And now we have two broken wheels. One tire was flat and the other badly damaged but still full. 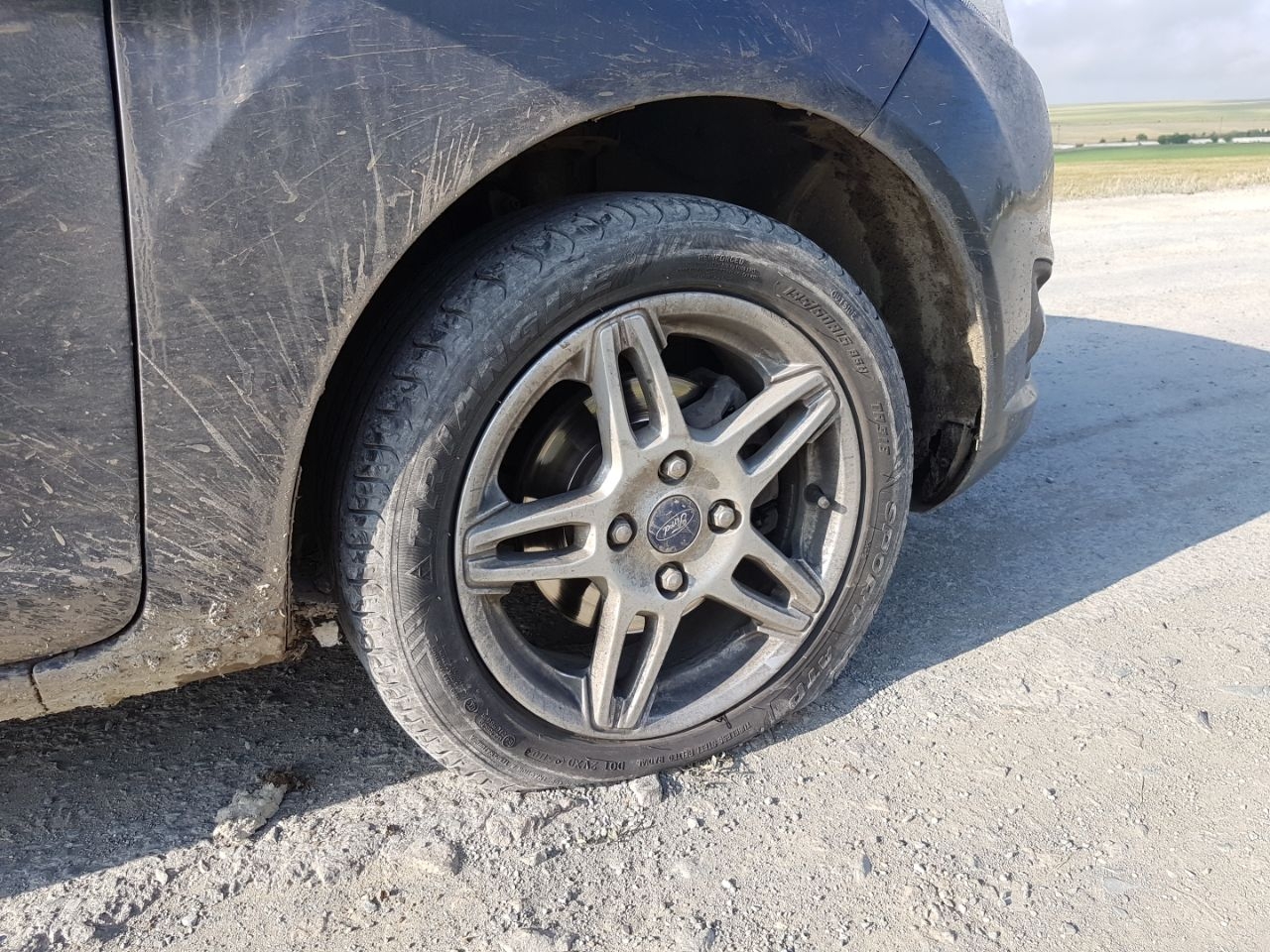 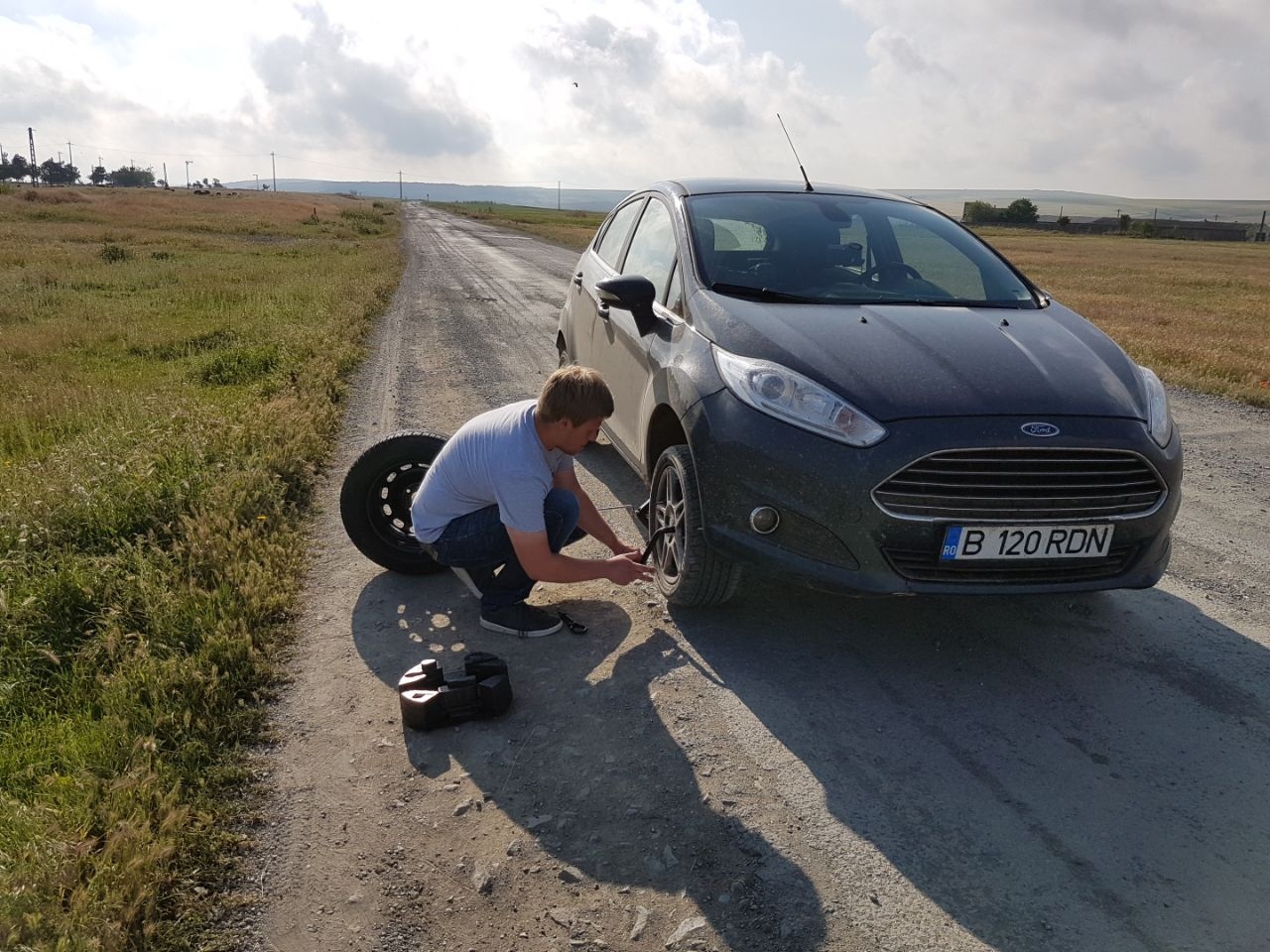 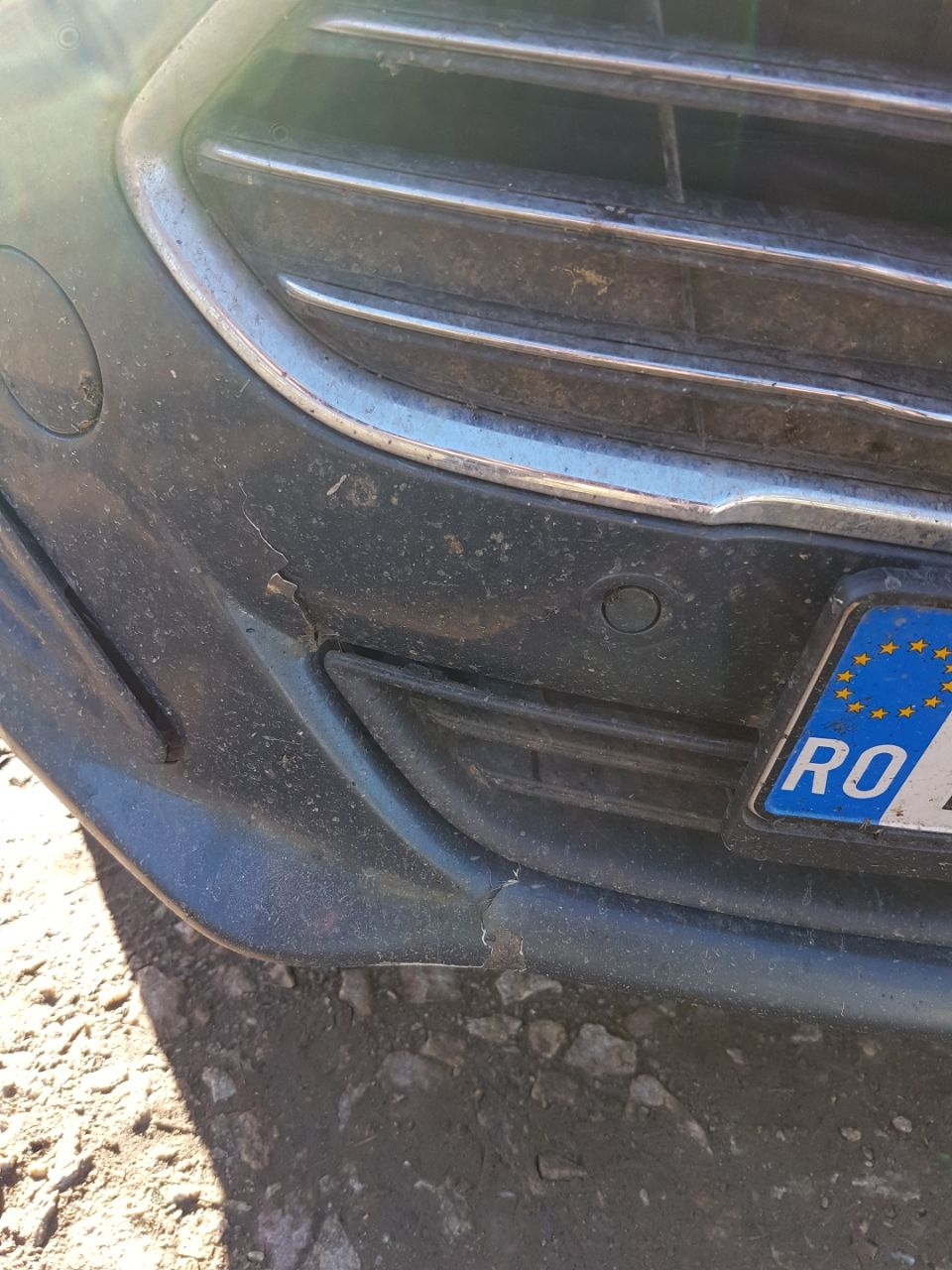 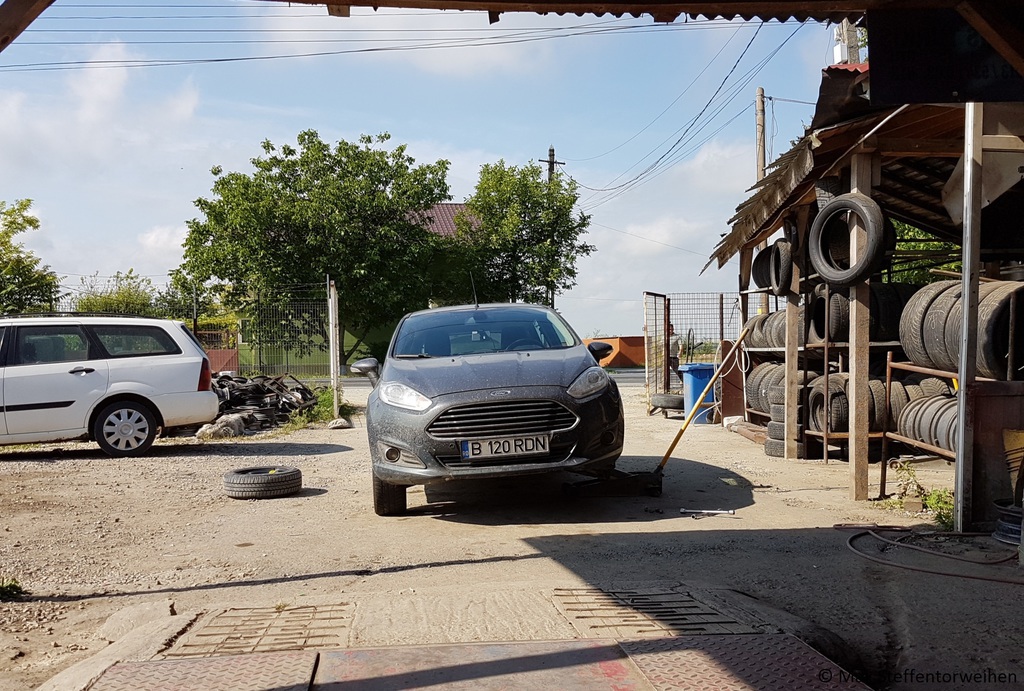 After 15 Kilometres we found a "Vulcanizare", a workshop for wheels. He have two matching wheels for this car. The repair costs only 160 Lei, around 30 Euro. And we are mobil again.

Just in time for the next train. We visit the bridge again. 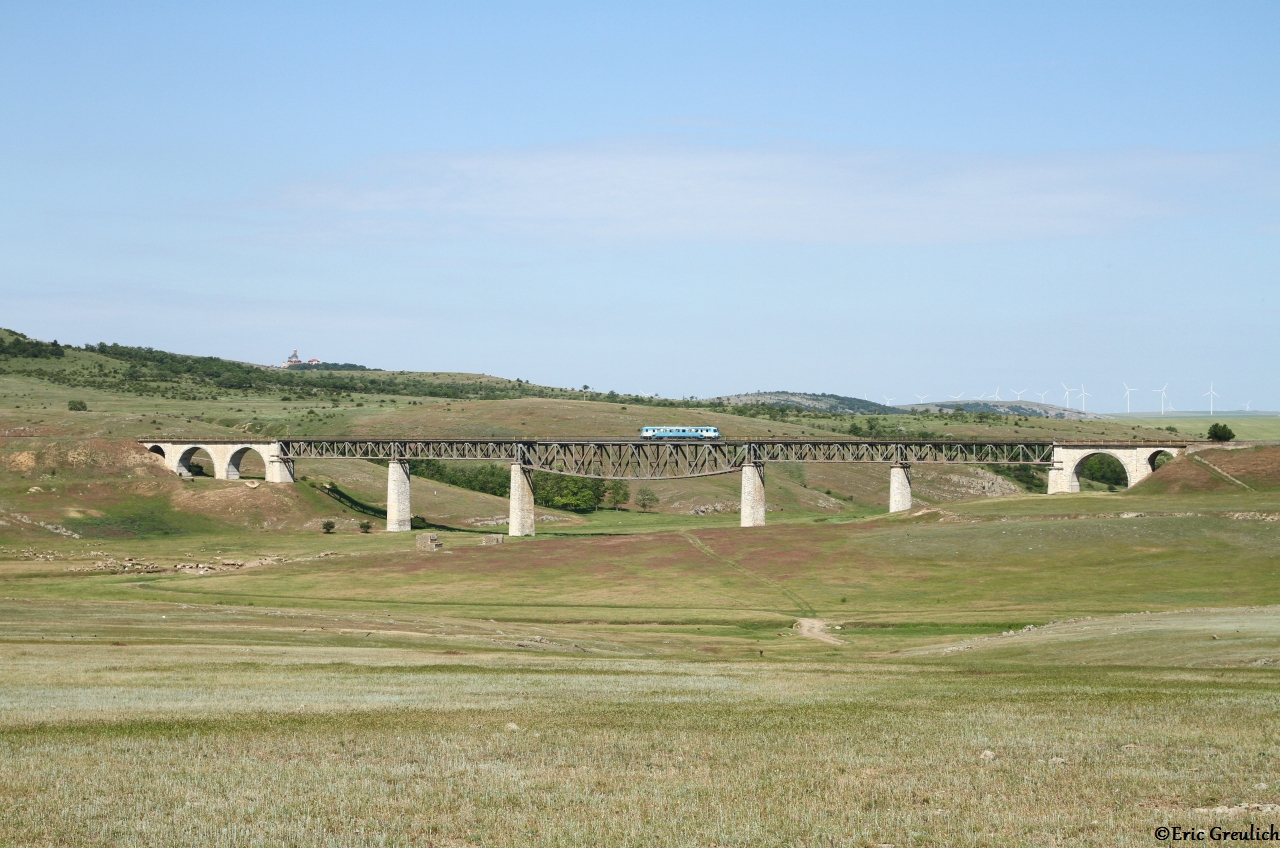 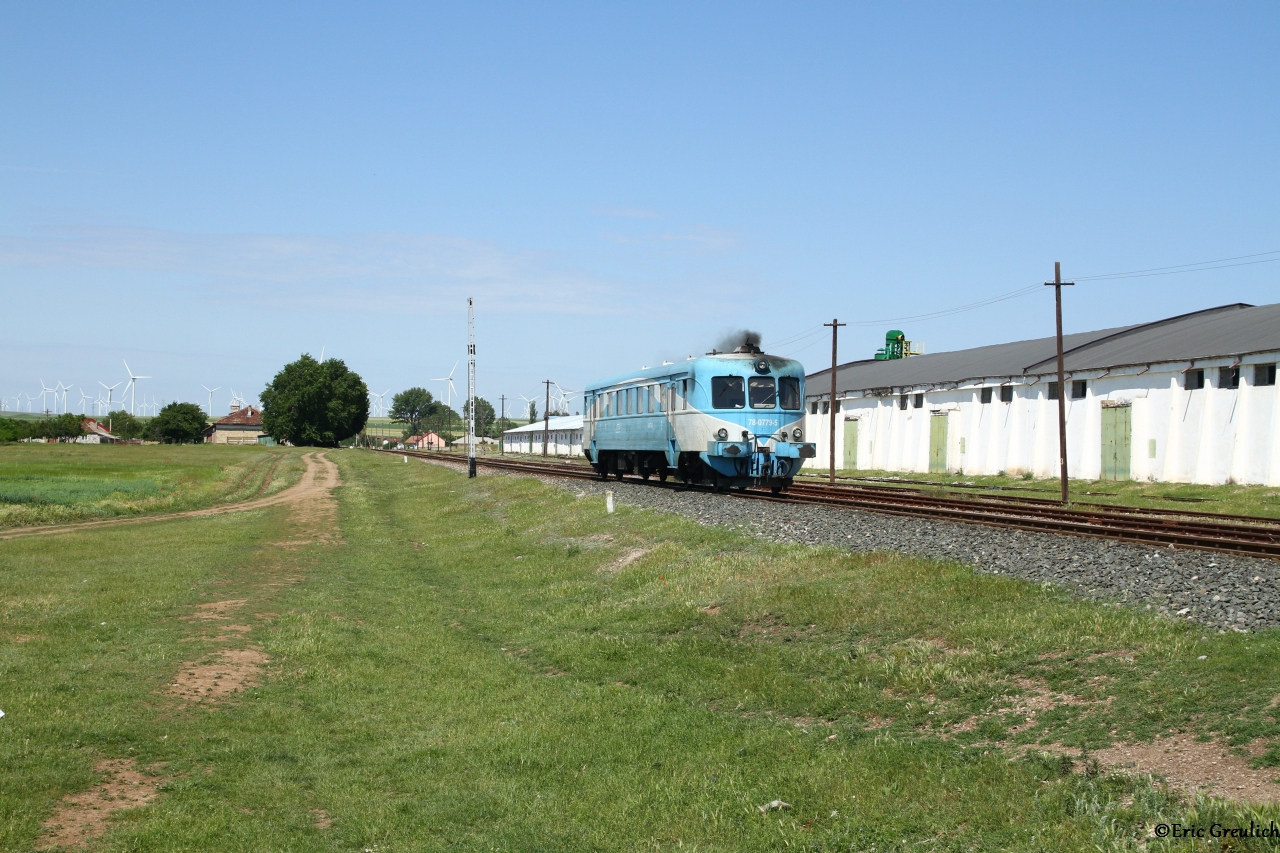 Than we have enough time. The train will startet at 4 PM in Medgidia, so we want to visit the mainline from Bukarest to Constanca. On the ride, i heard a crack. At first I thought, that was a small stone on the windshield. Only a few minutes later I saw that someone had damaged the mirror. That was annoying. But the damaged was low. Only a peace of plastic was broken. I reported it to the rental car company, if the accident opponent should report. 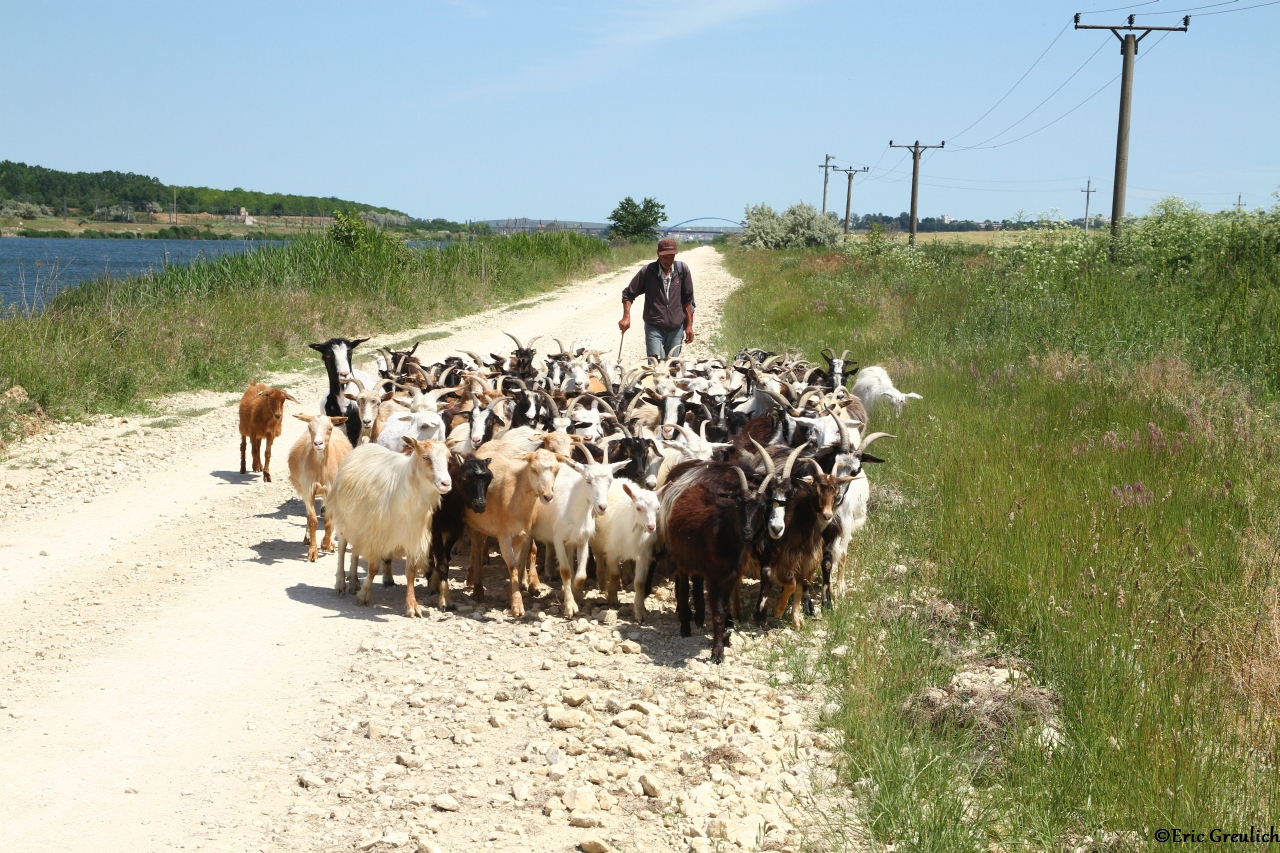 That was typical Romania. The profession shepherd is omnipresent. 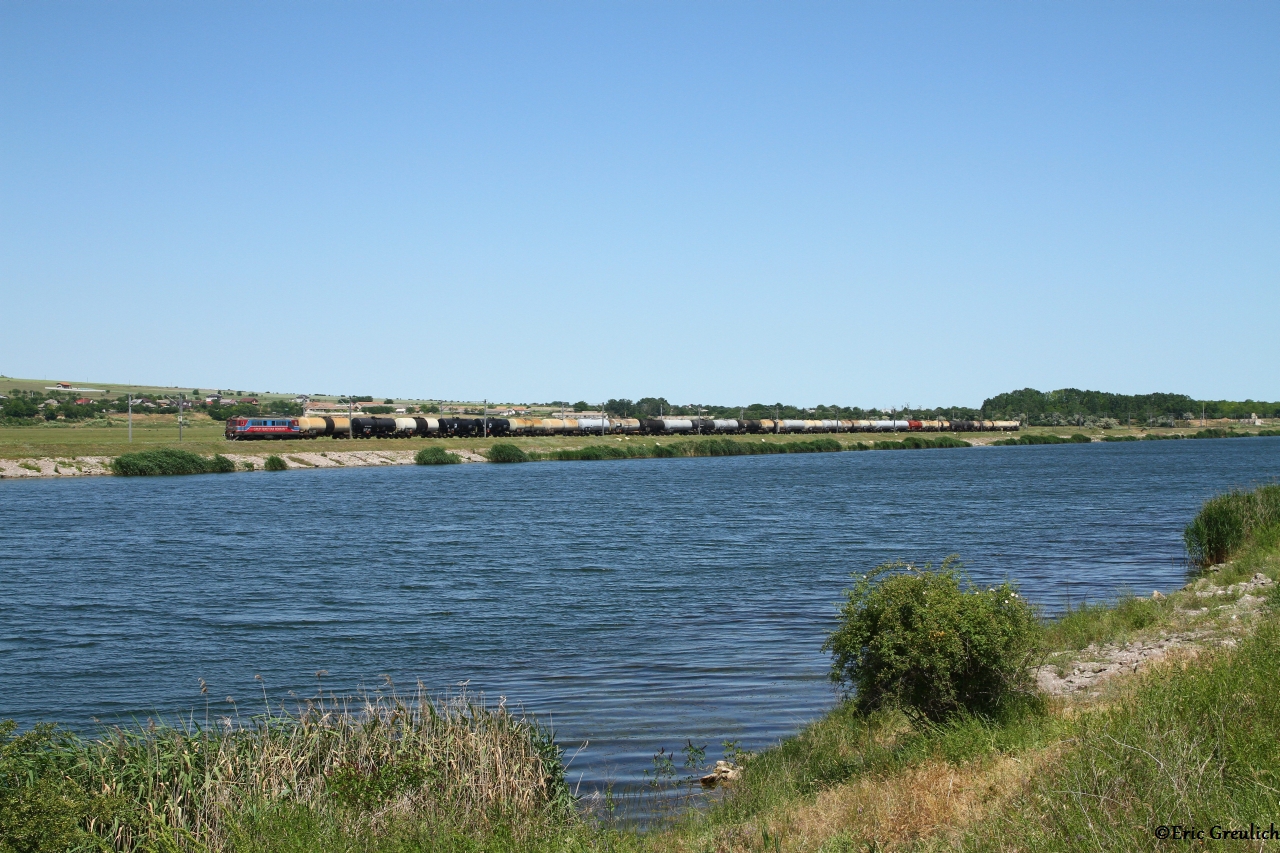 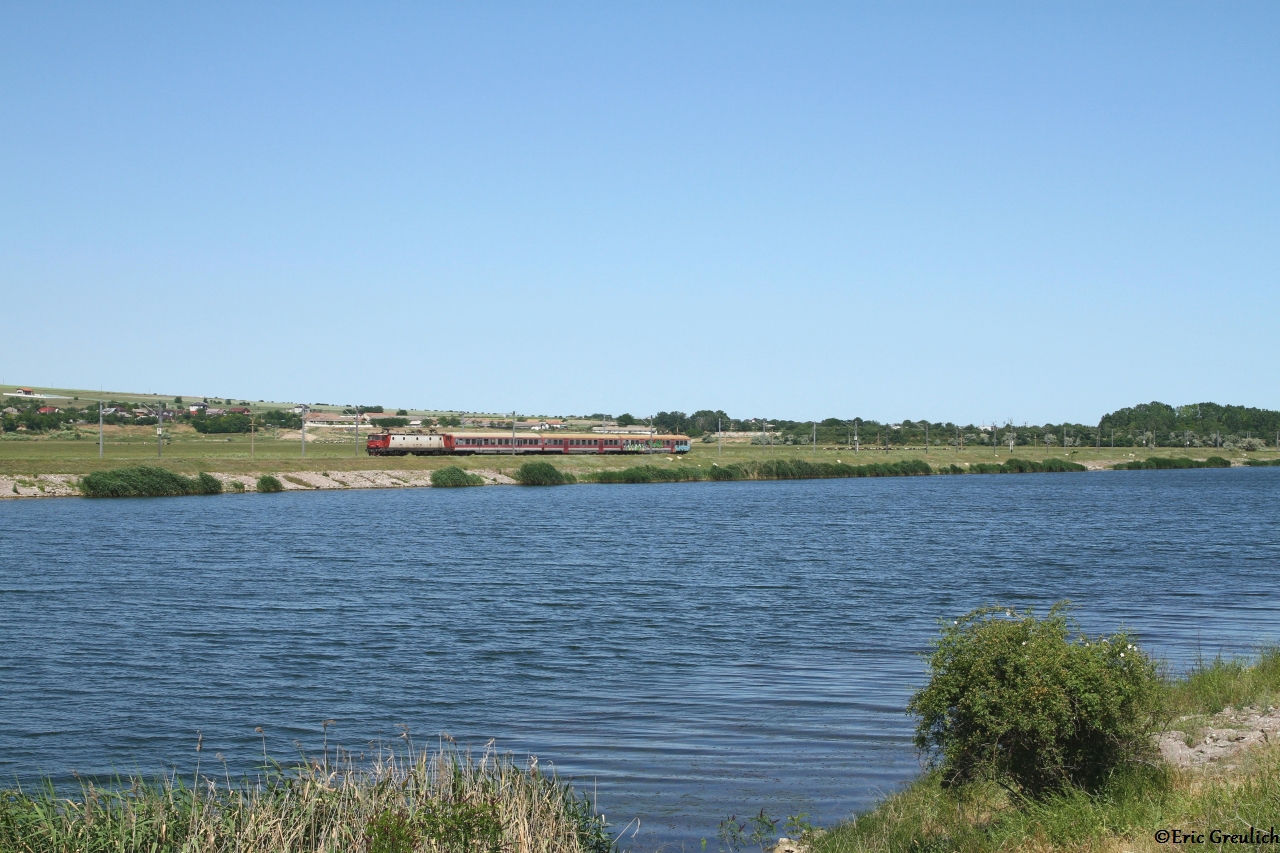 And a unknown class 60 with a local train.

At the afternoon, we drive to Targusour. 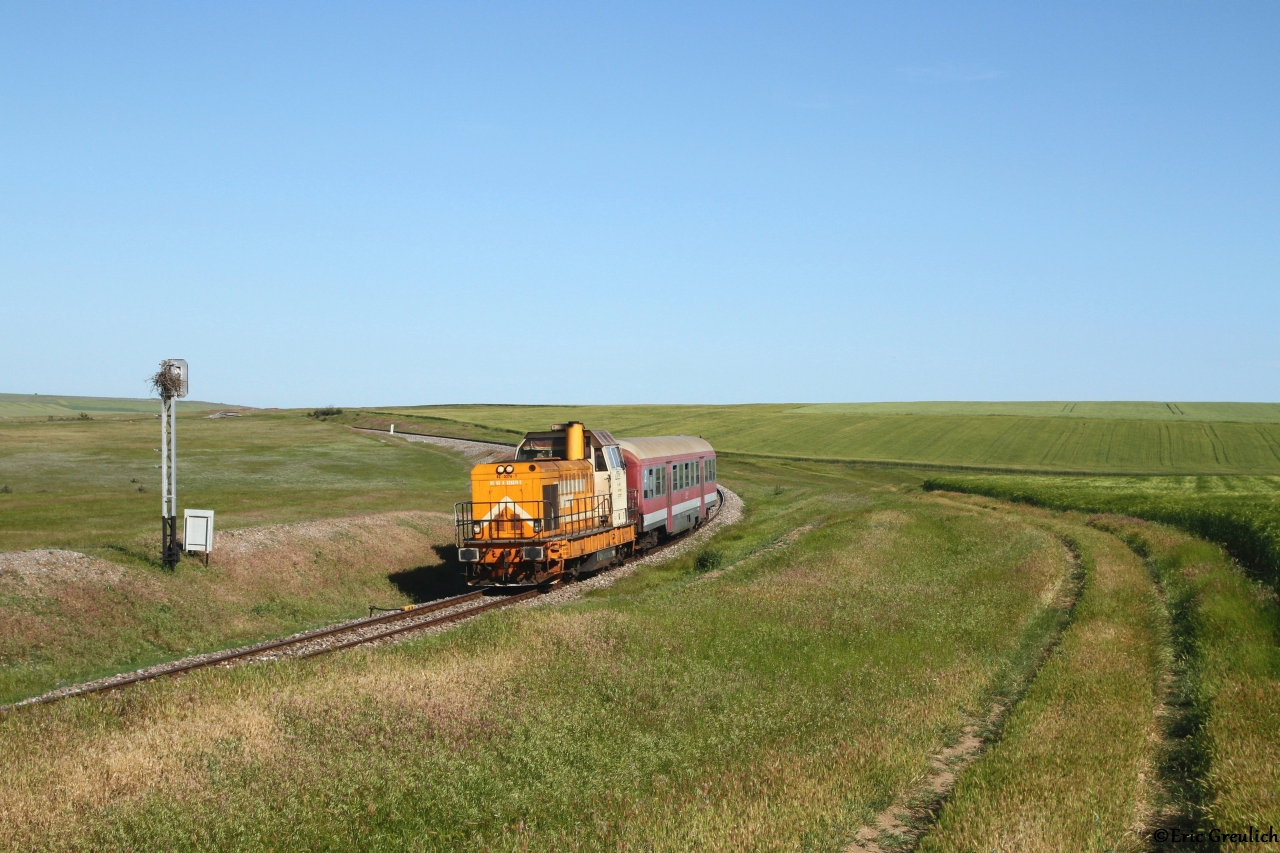 82 0374 with a local train from Medgidia to Tulcea near Targusour. 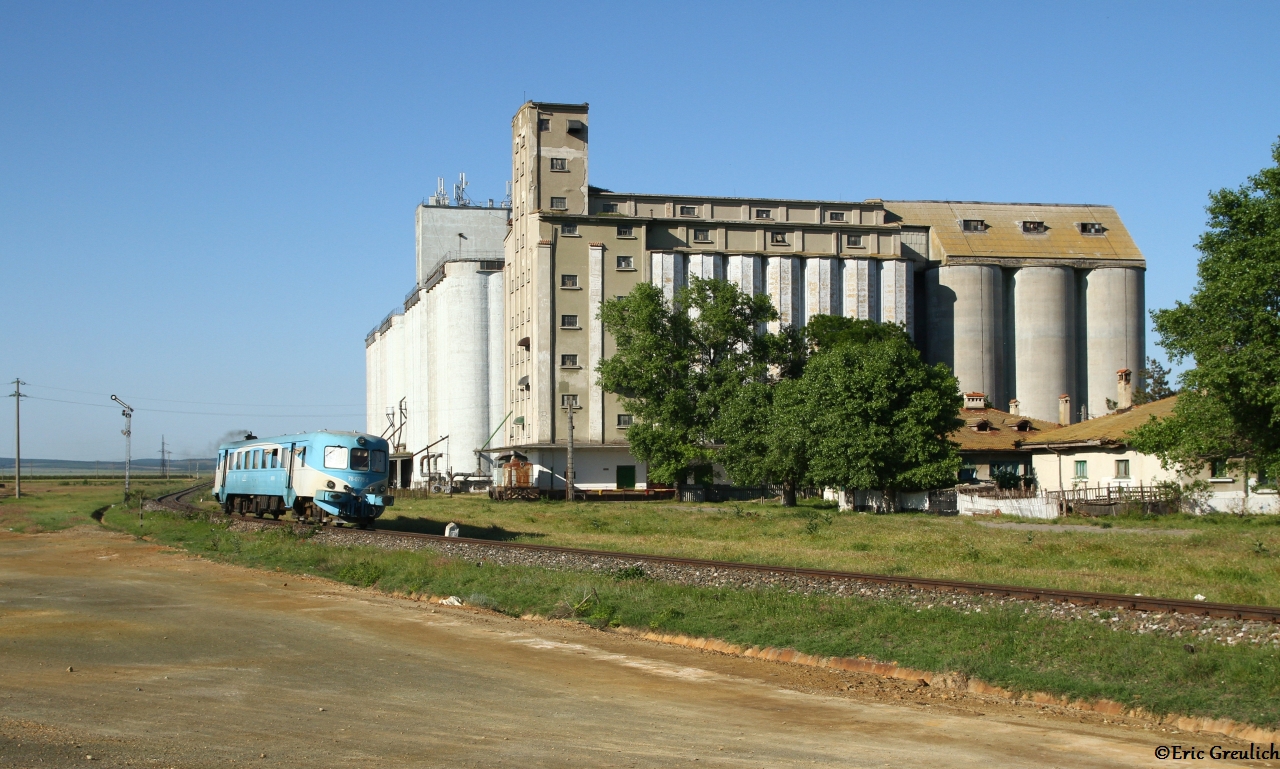 78 0779 with a local train from Tulcea to Medgidia in Baia Dobrogea. 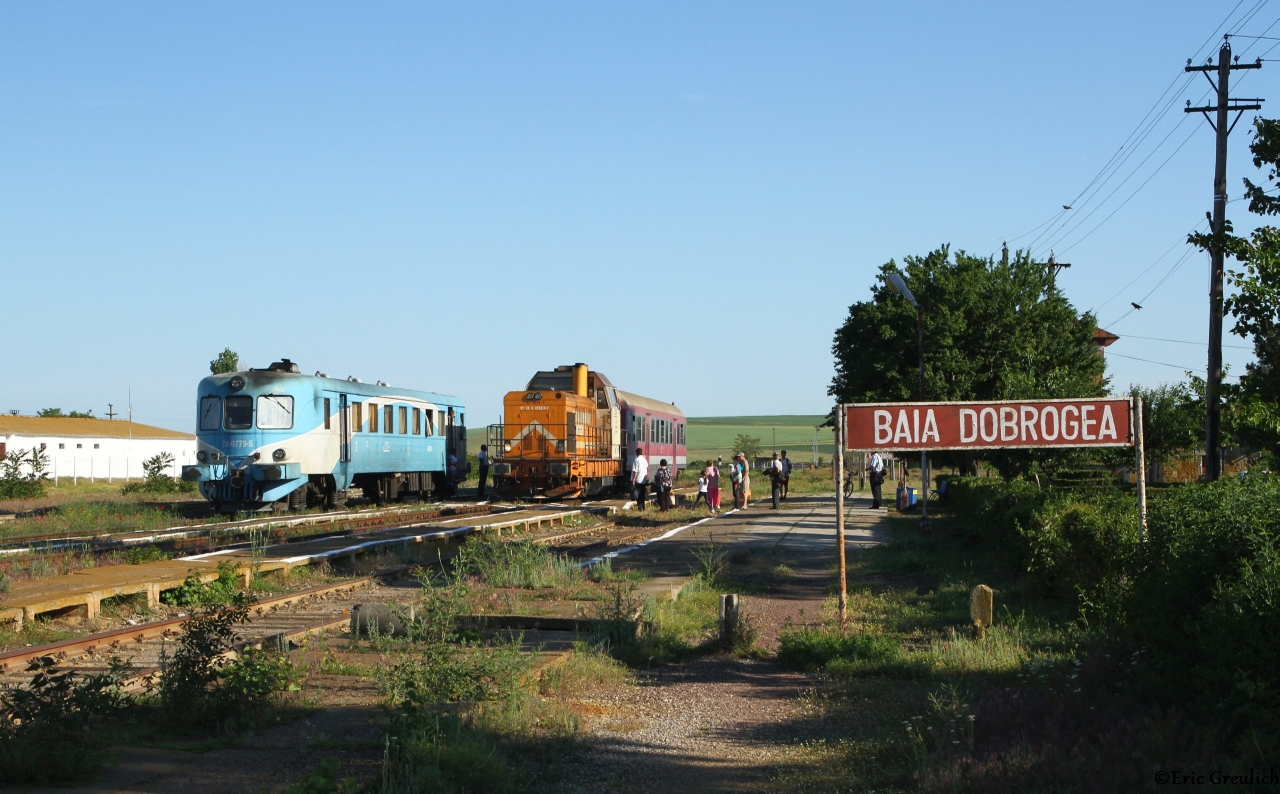 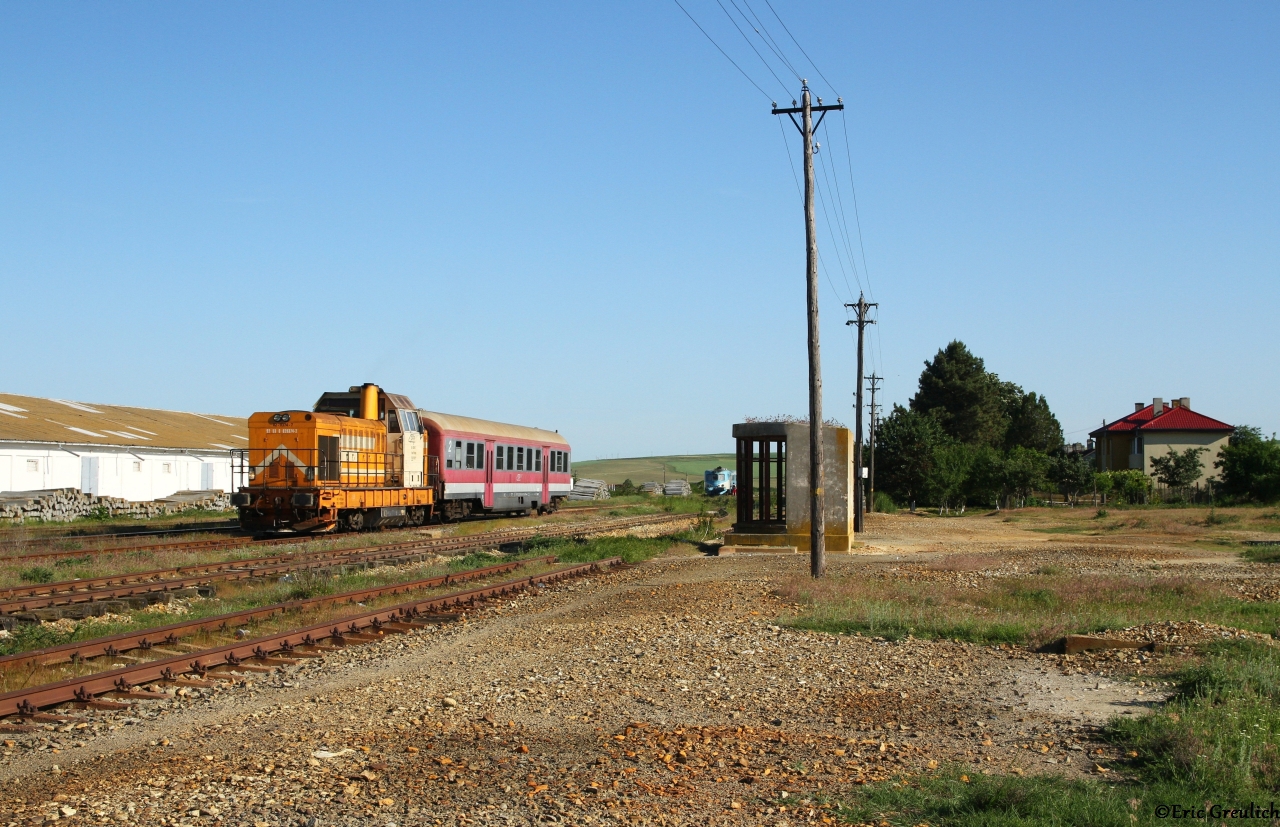 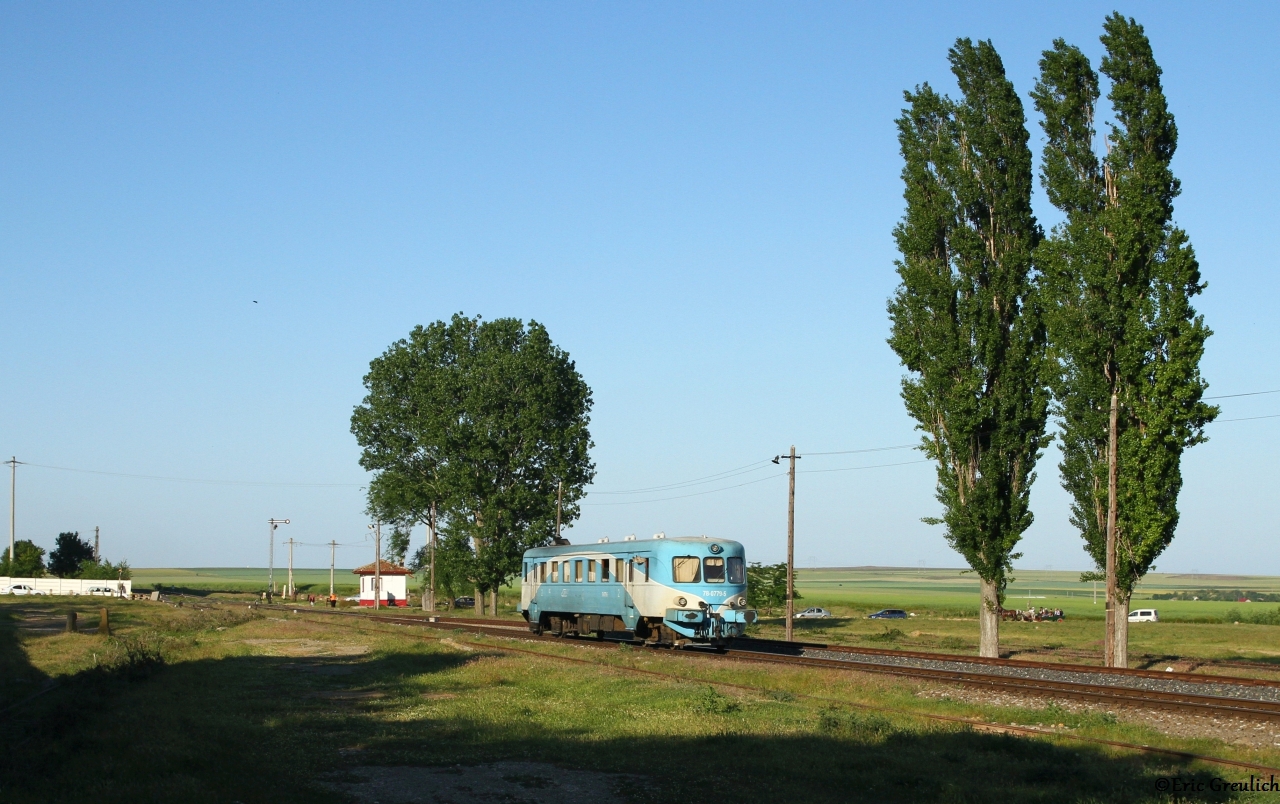 And a last photo from this day was taken in Cogealac.

Then we drive back to Bukarest. We need more time than we thought. Around 70km before Bukarest, we look in a bigger town for an hotel. The mainstreet was in a good condition, we thought... 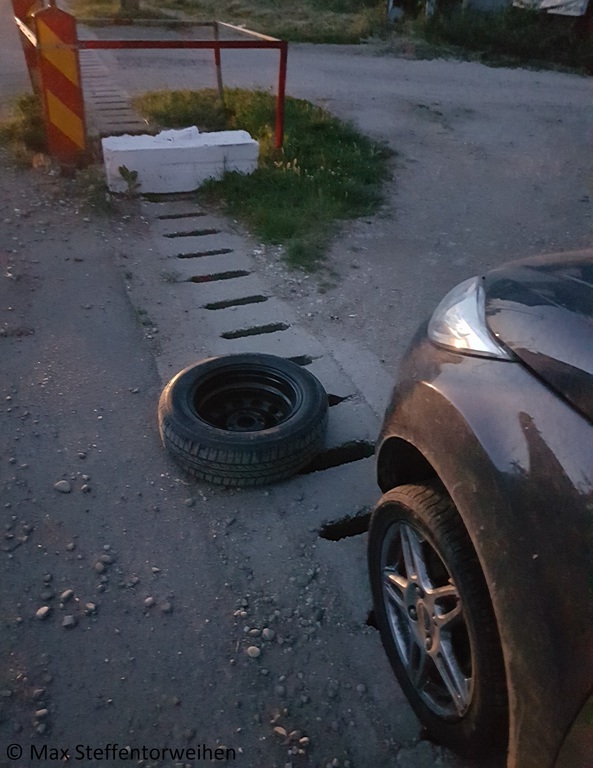 How much bad luck can you have? Out of nowhere a pothole.

We knew that we would not get far with the spare tire and drove on the highway to Bukarest. And the highway have a lot of potholes too... We found a hotel near the Autobasar. It was the badest hotel I ever have seen. The gulag stank like a ashtray and the room was ditry. But I did not feel like looking for anything else.