At first we take a look at former Vienna Eastern Station terminal ("Ostbahnhof", the lower level or platforms 1-9 of Vienna Southern Station - "Südbahnhof") which now has been replaced by the new "Hauptbahnhof" (Main Station) through station. Of course this report cannot be a complete compendium about these interesting terminals, just deal with a few relevant topics.

Excellent morning mood on December 9 2006, to the right on the track in front of the central postal office usually interesting rolling stock was stabled. 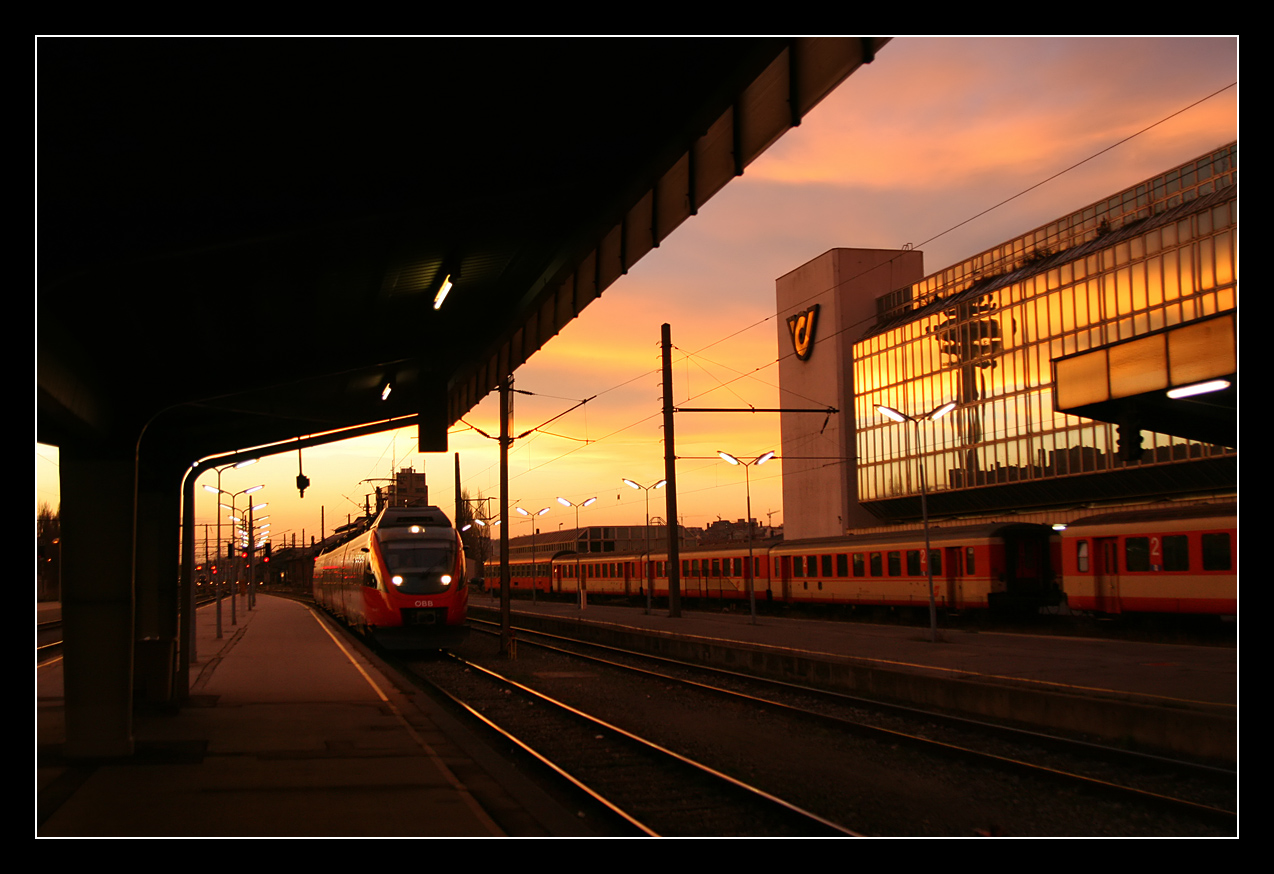 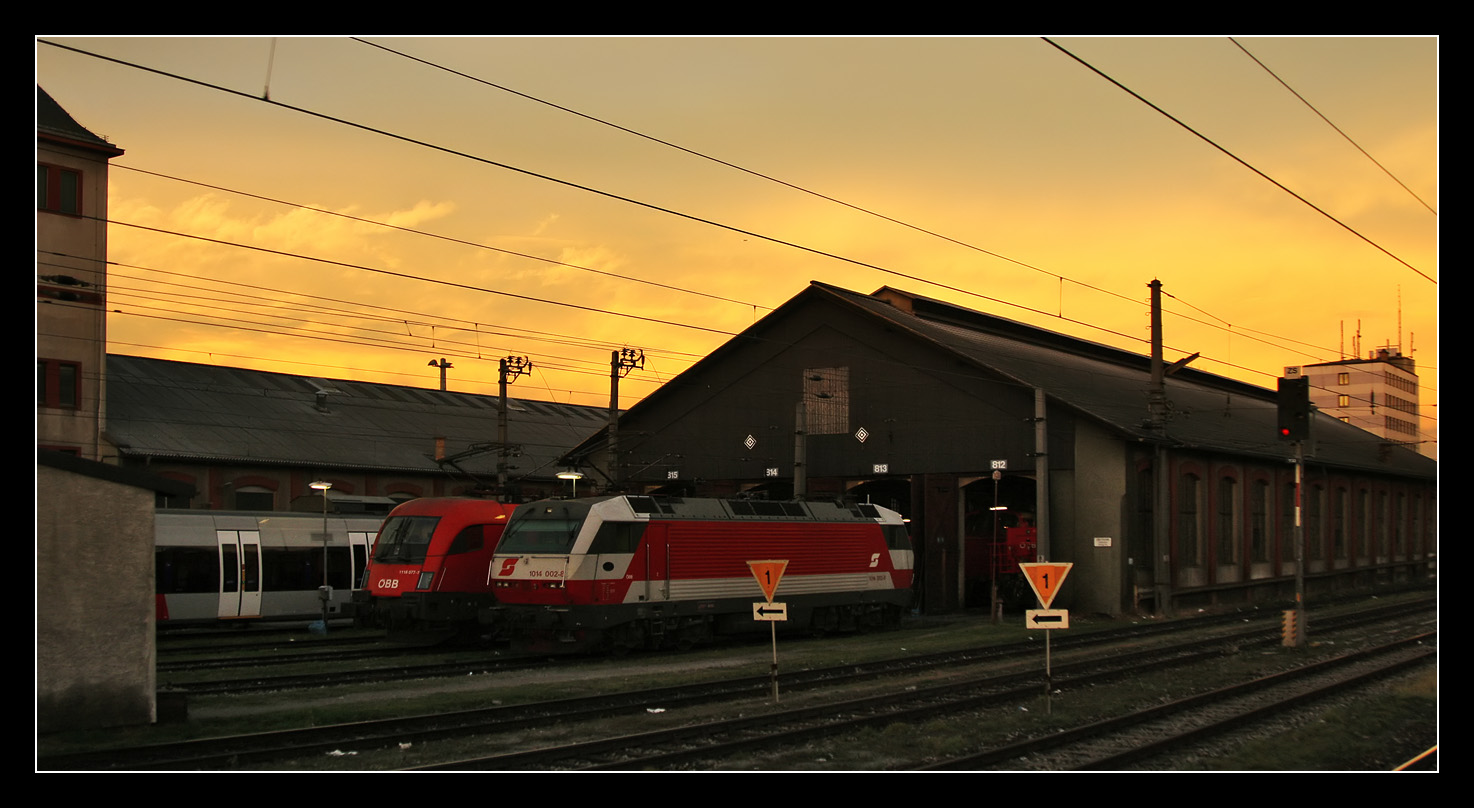 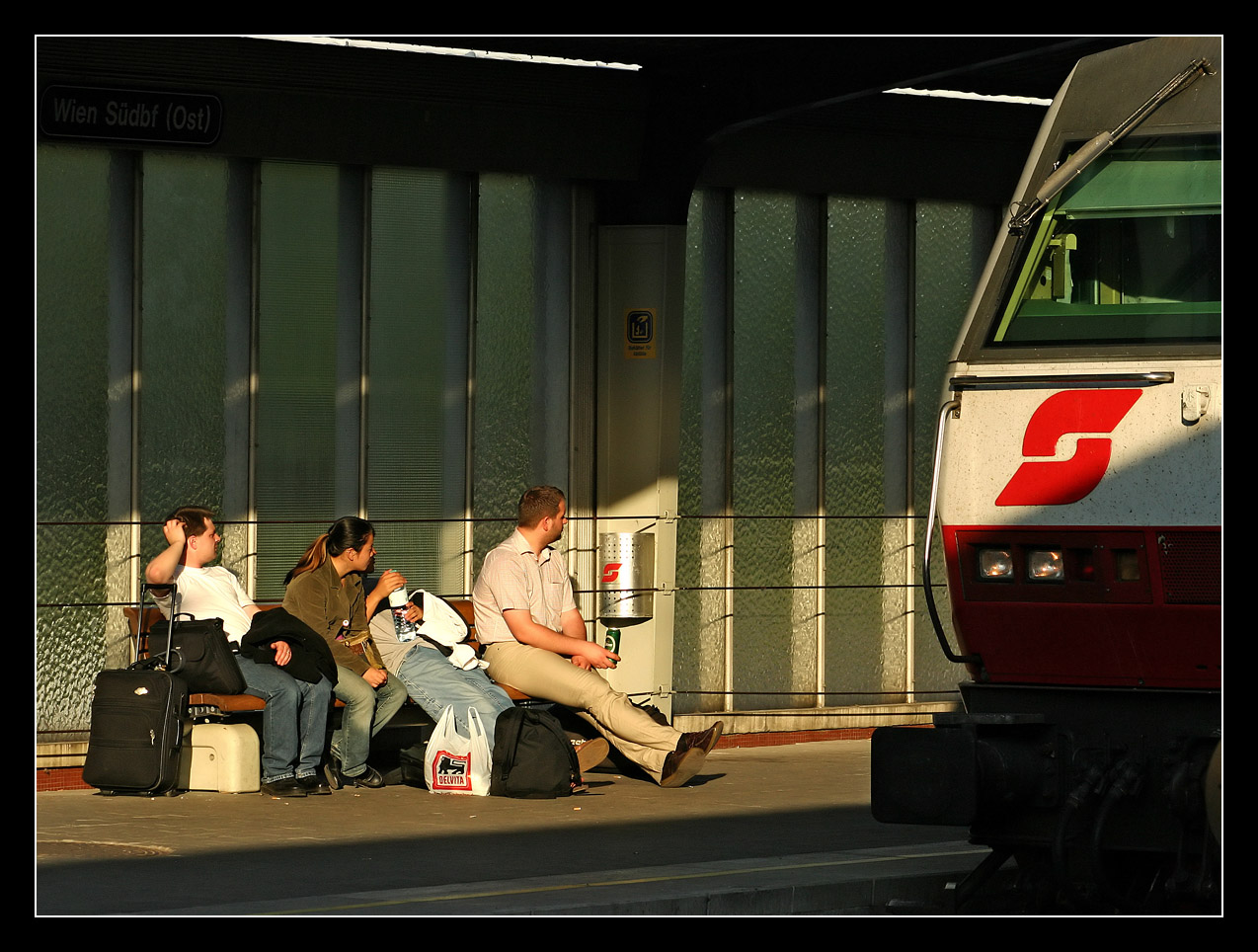 Trains from all corners of Europe were terminating here:
To the left: "Oh no, not pigeons again!" - EuroNight 236 "San Marco" from Venice arrived early at 6:26 a.m. routed via Wampersdorf - Gramatneusiedl, before the route was changed to the Western Railway via Salzburg and Tauern Pass to achieve more economy (running combined with other overnight trains) and a civilized arrival hour.
D 203 "Chopin" from Warshaw reached Wien Ost on schedule half an hour later hauled by a class 1014, behind the loco a Russian RZD through coach from Moscow on September 7 2003.

Early version of ÖBB class 1116 (.001 - .025) with a third pantograph for Hungary - which became redundant soon after its introduction - to the left, "Chopin" composed of RZD-sleeper and old Polish PKP-coaches to the right.

On August 30 2009 I captured the Ukrainian UZ-sleeper Kiev - Vienna for the last time, arriving punctually behind ER 2507 "Adebar". 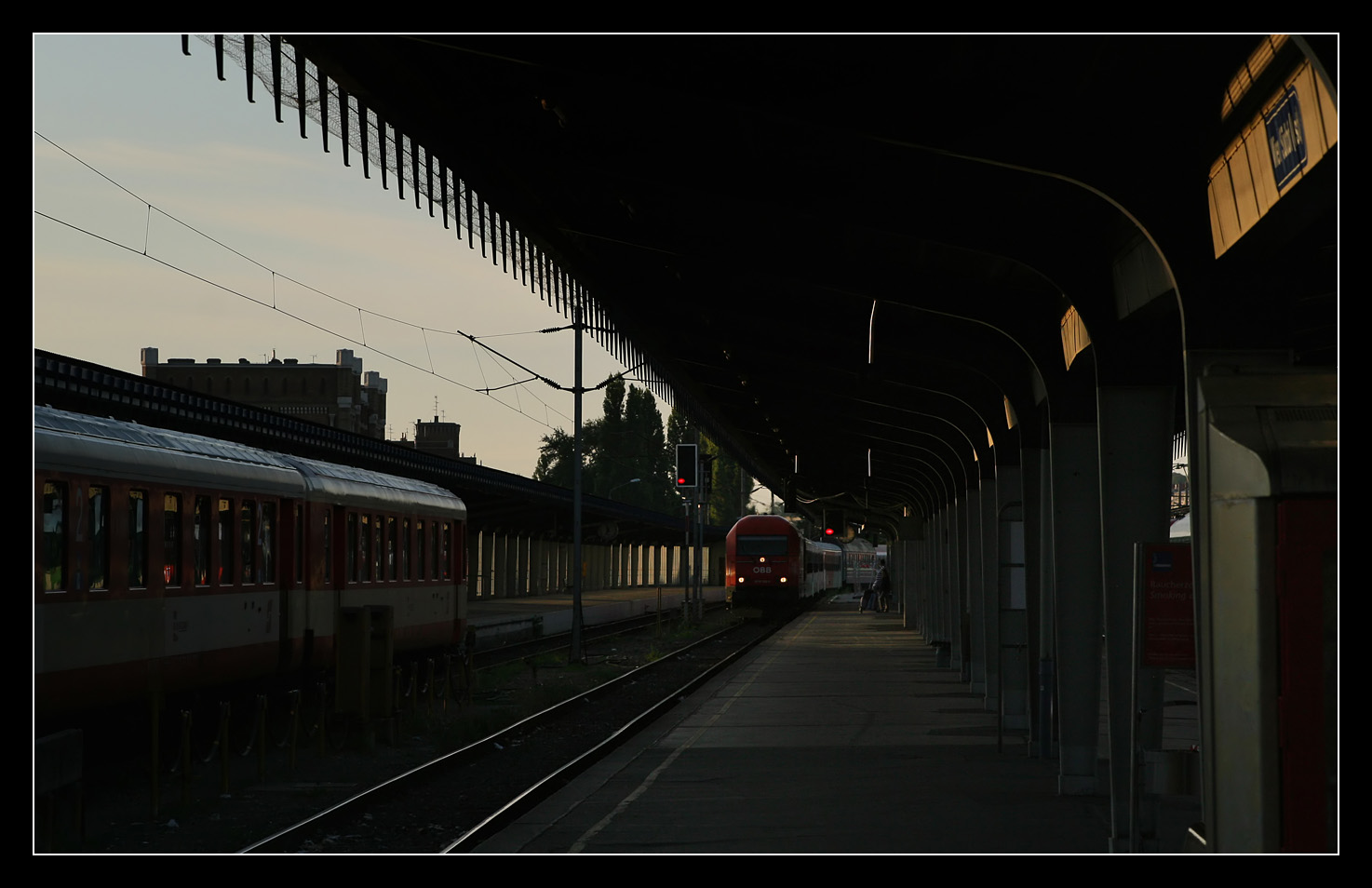 Class 2143 with Schlieren coaches at that time operating only as nostalgic "Erlebniszug Wachau" to Emmersdorf anymore. 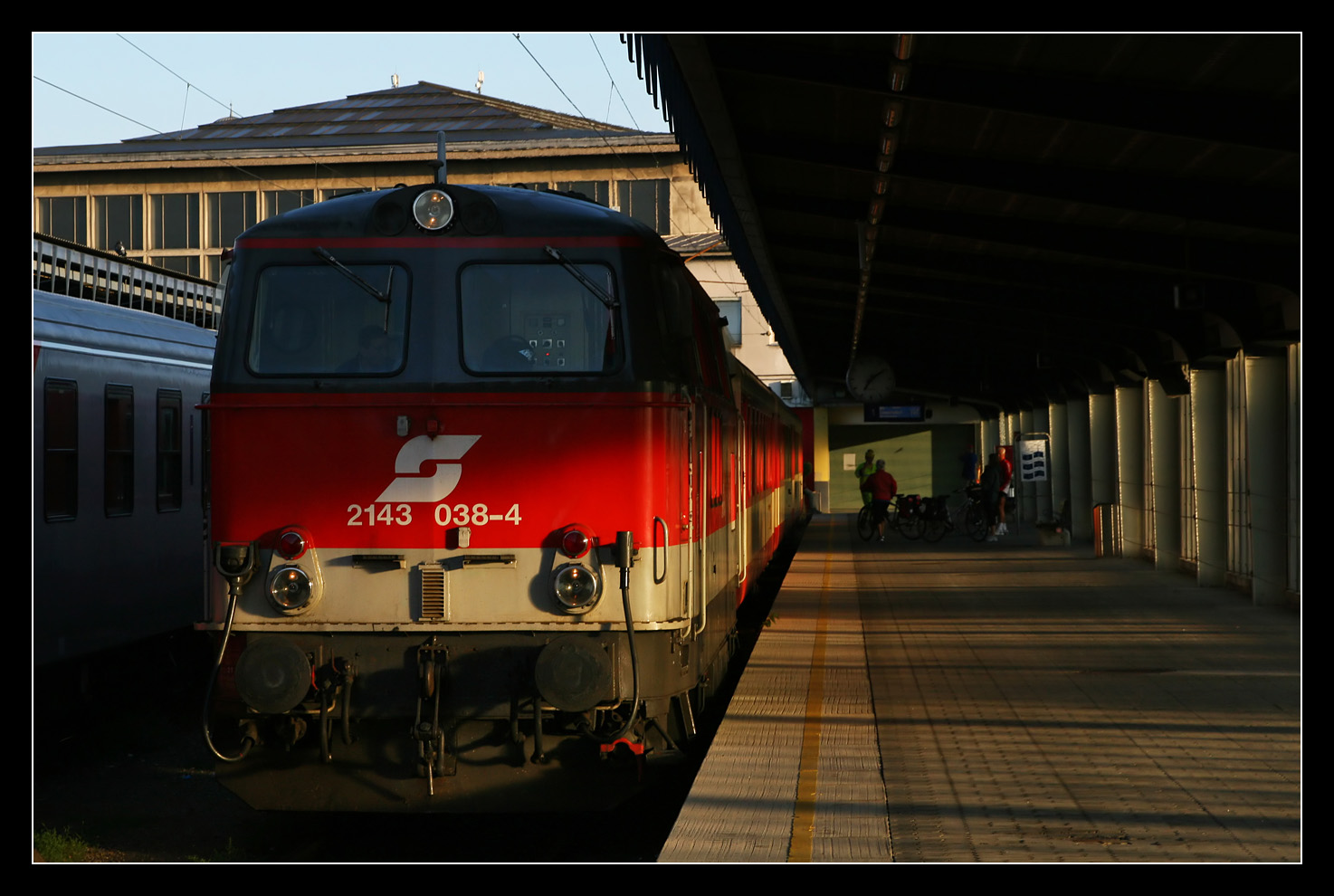 The classic Südbahnhof ticket hall, upstairs were the Eastern Station platforms, a bit further up the Southern Station. 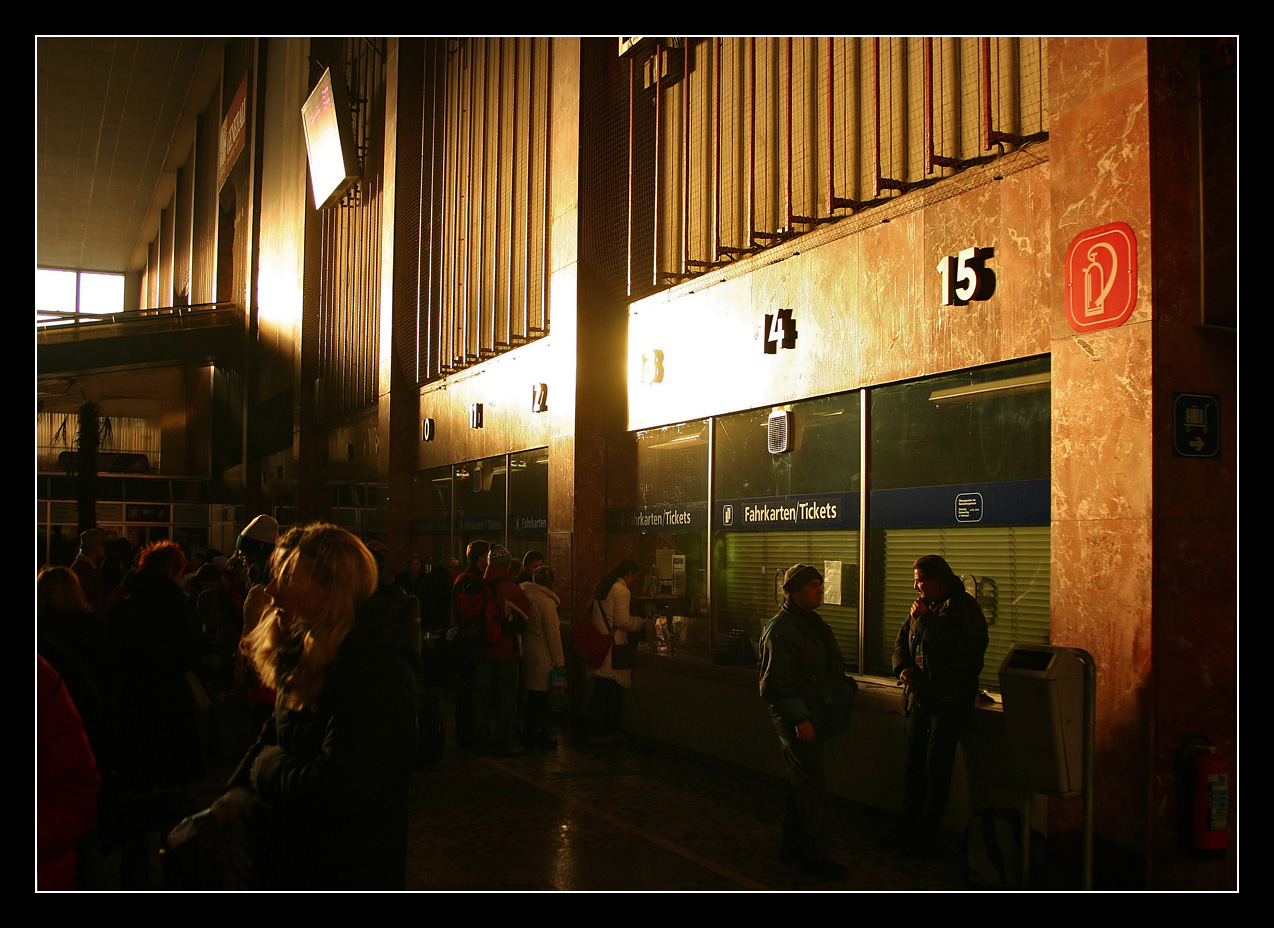 Maintenance during the day.

Class 1014 electrics – now out of ÖBB service - were in use on the Northern and Eastern Railways, EuroCity 172 "Vindobona" to Hamburg on September 17 2003.

Diesel generations at the depot.

To the right: who notices the detail? ;-)

On September 12 2004 the UZ-sleeper was being shunted together with other interesting coaches. 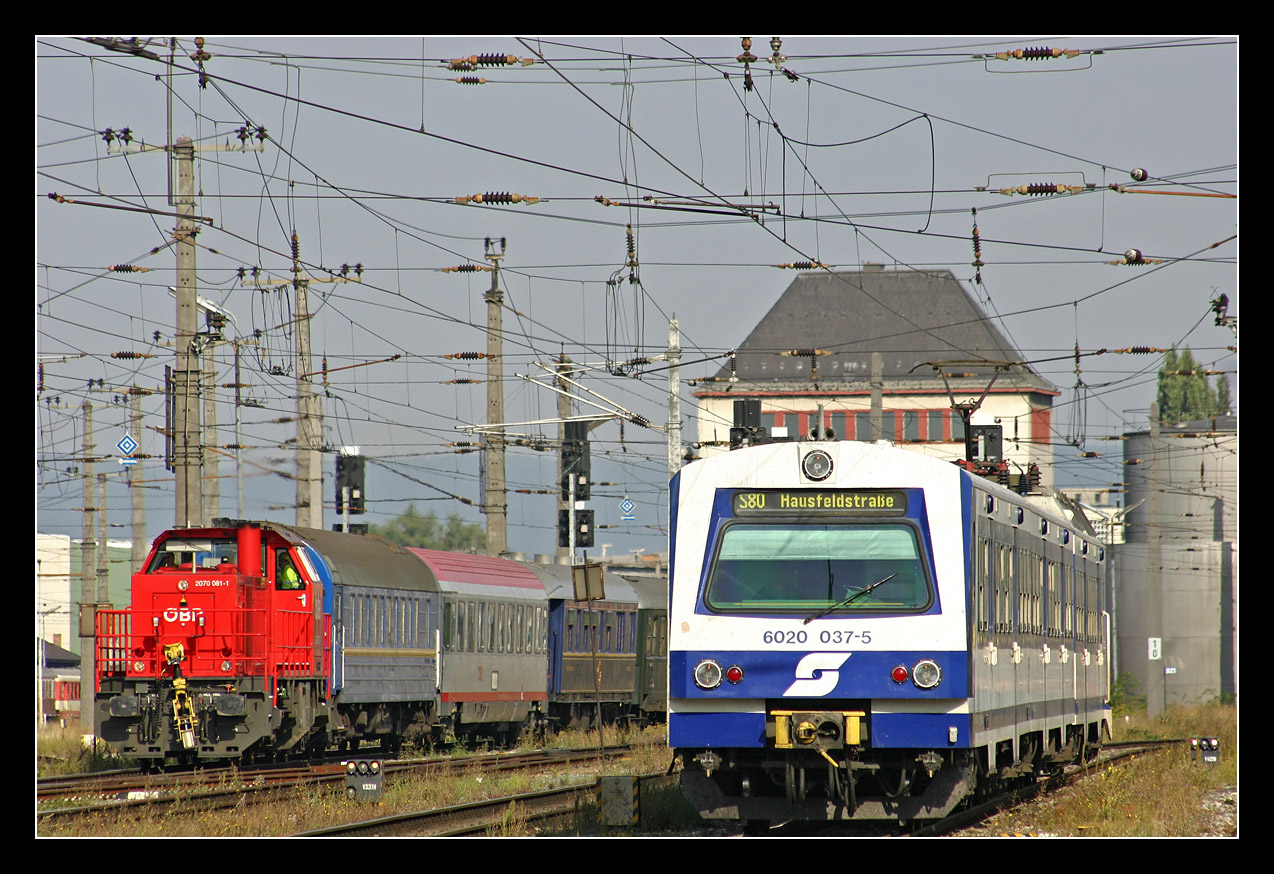 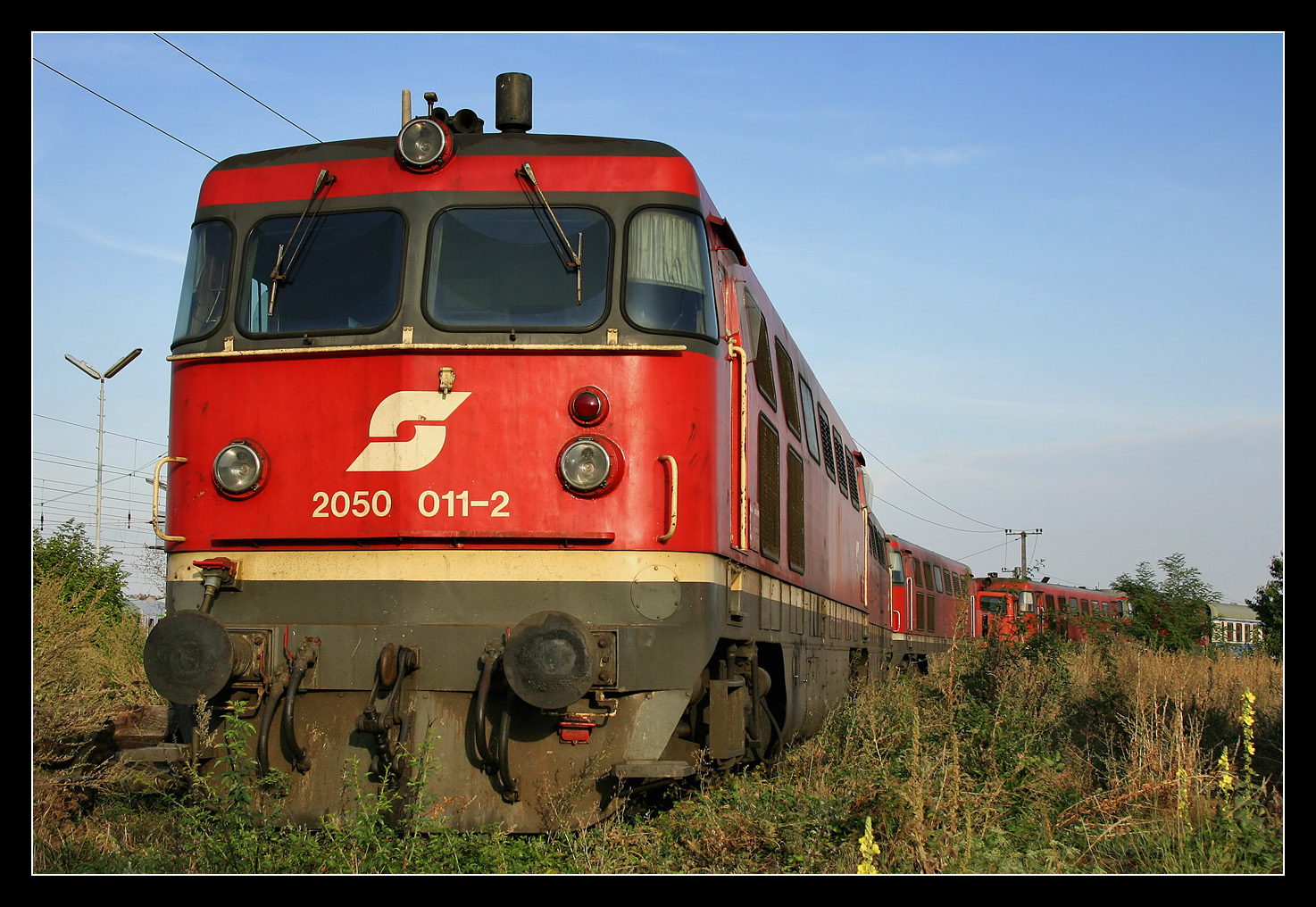 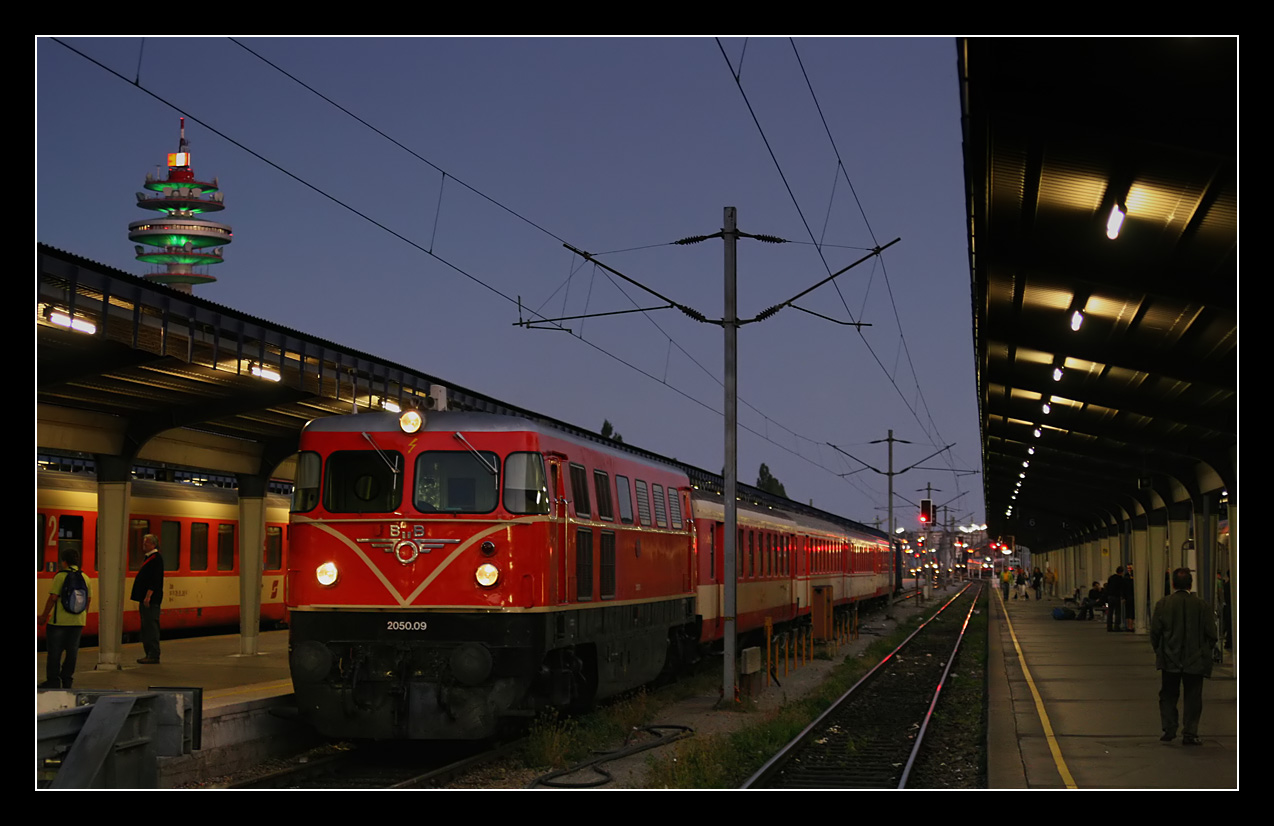 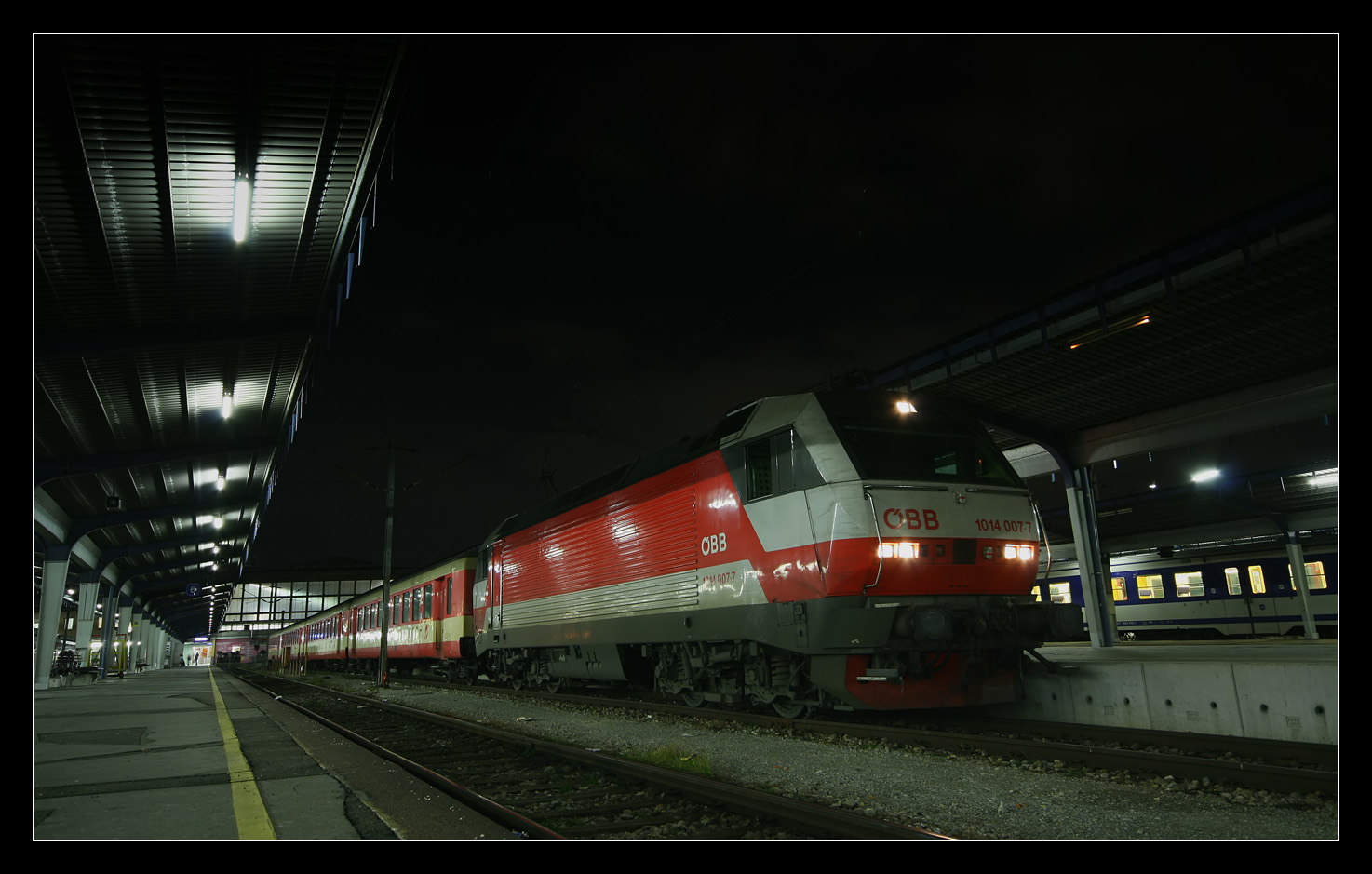 As the overnight express "Chopin" to Warshaw and Moscow was standing at the platform during cold winter evenings you felt taken back to the steam age with the smell of the coal-fired stoves on the former Eastern Bloc coaches. The compartment of the RZD-provodnik (sleeping car attendant) on December 11 2002.

The end of all this magnificence: a remainder of the Eastern- without Southern Station passed by Railjet 68 Budapest - Munich on September 27 2010. 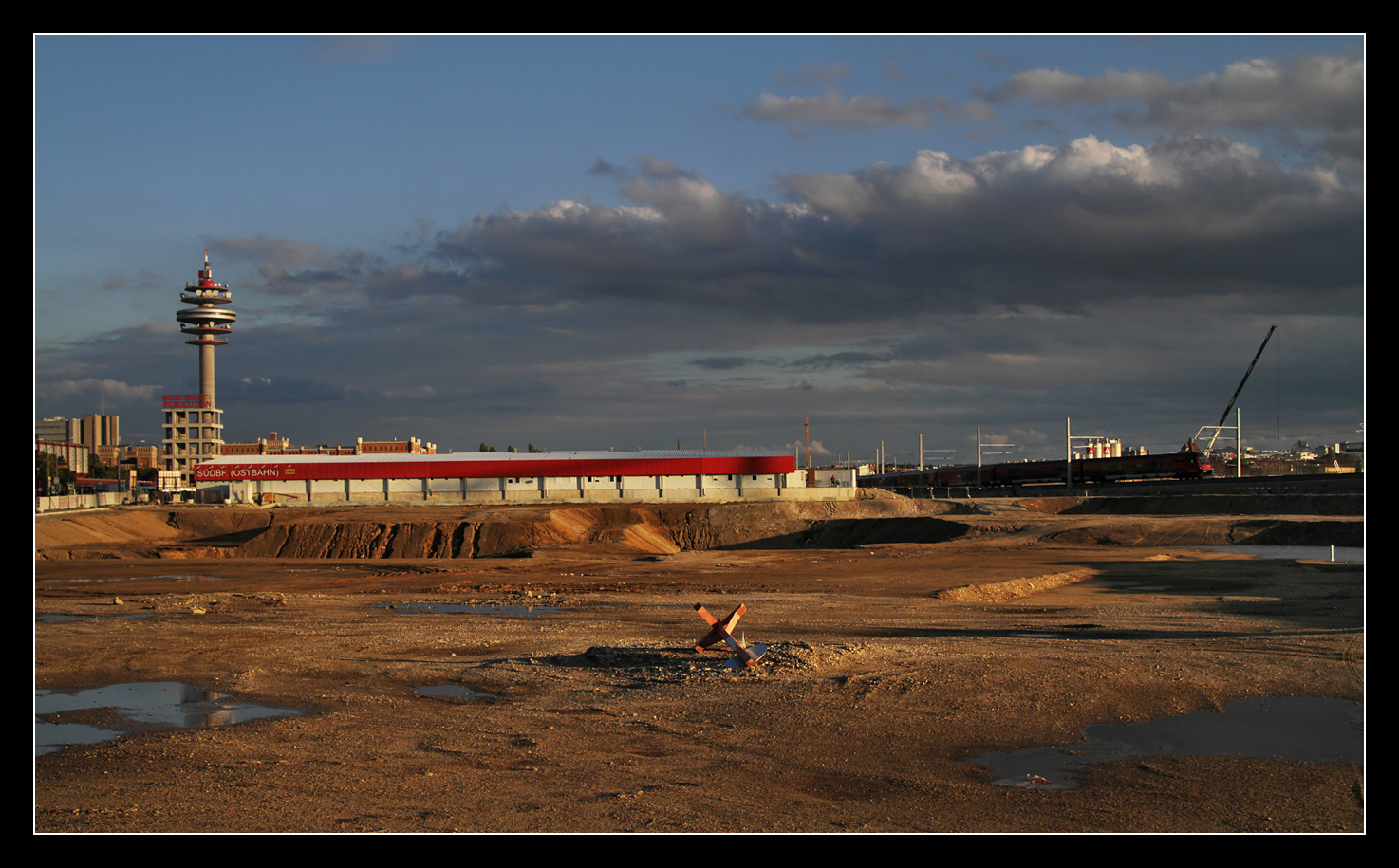 On September 22 2012 left of departing steamer 93.1420 you can already spot the new Vienna Main Station, which soon afterwards was capable of taking over all remaining services terminating at Ostbahnhof. 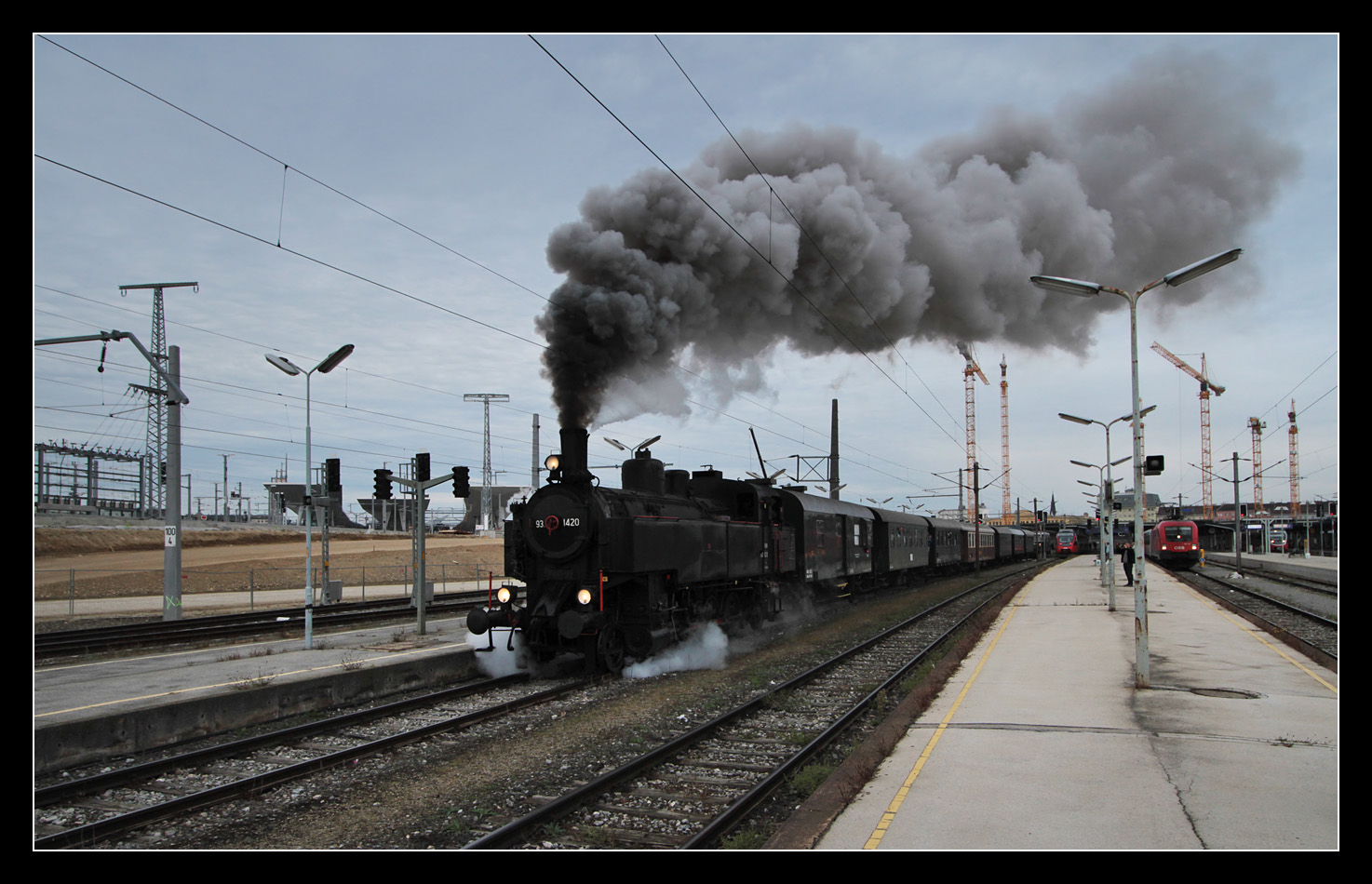 One reason why this massive former railway compound was cleared: urban development on February 17 2011. 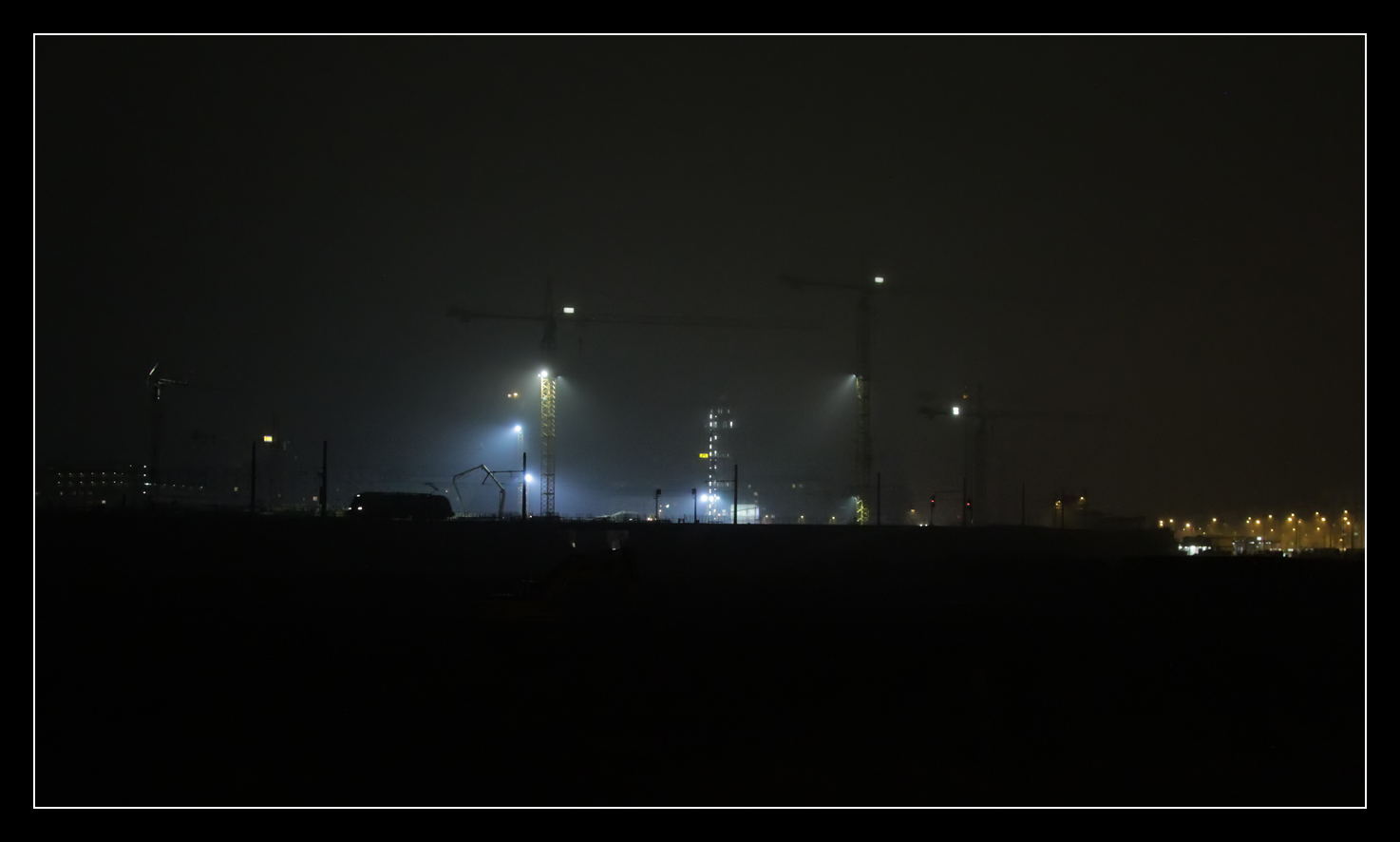 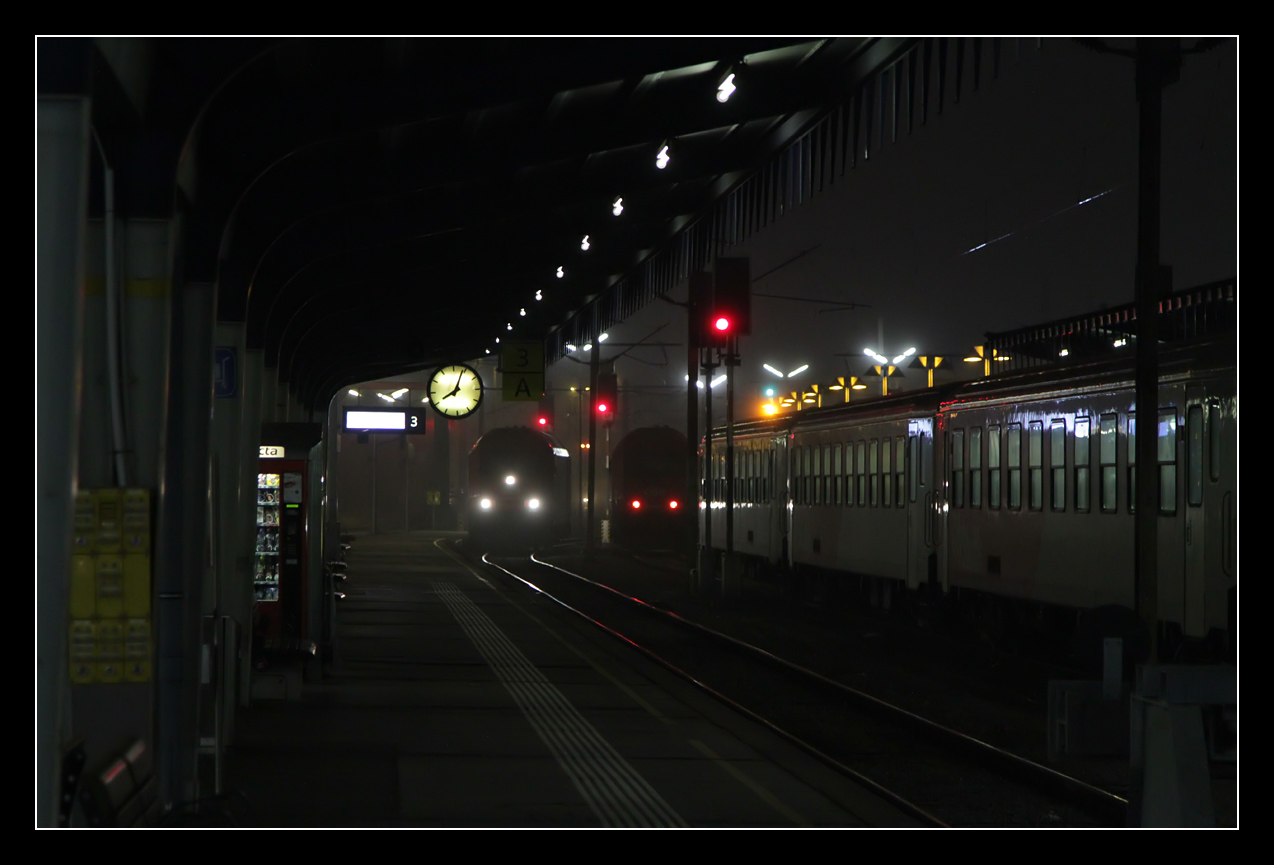 Now to the main topic: Until the end of 2004 the UZ-sleeper was routed to Vienna via Marchegg, but from Vienna via Petrzalka into Bratislava. On May 30 2004 IC 407 was ready to depart to Bratislava hl.st. with the through coach. 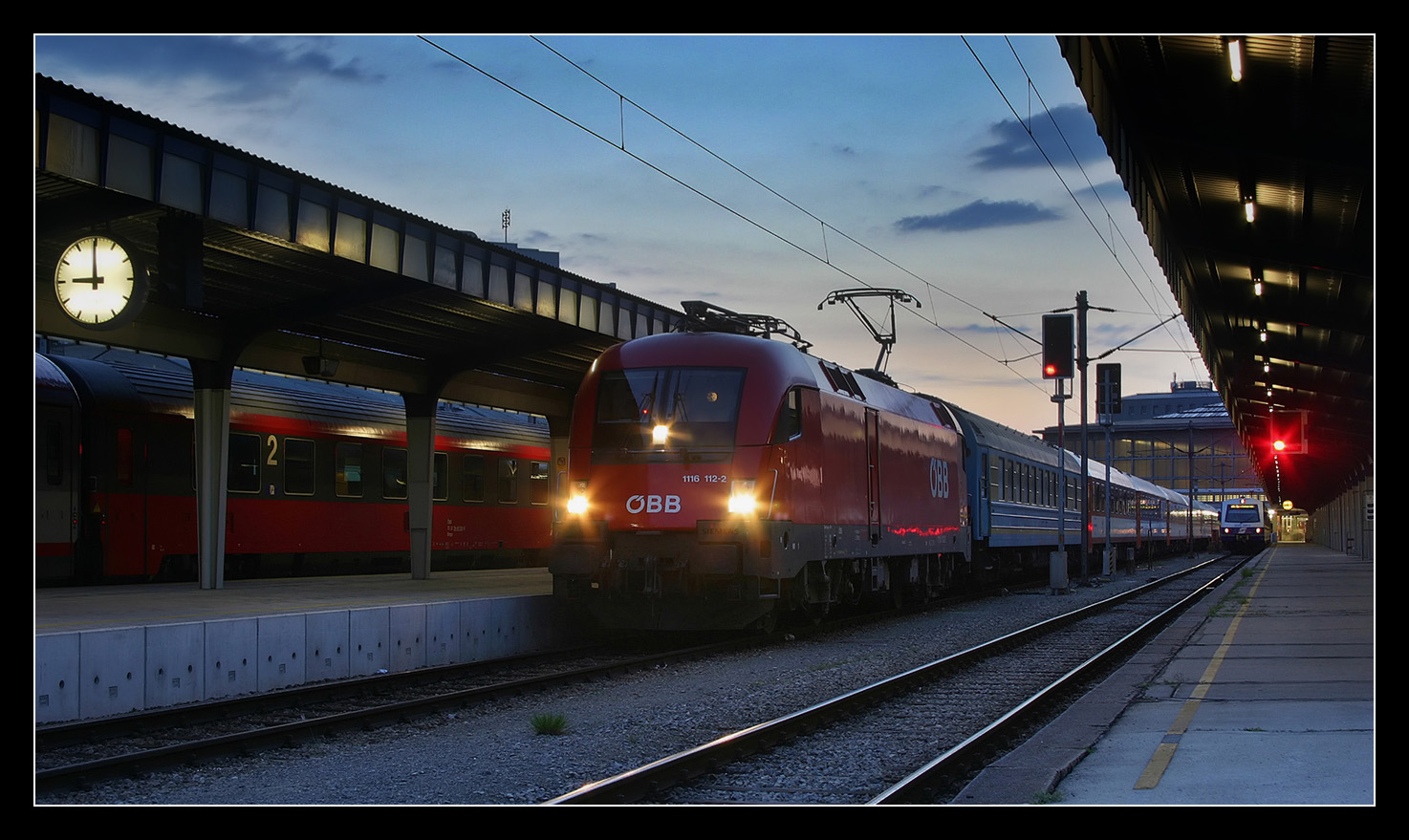 One year before, on April 11 2003, it had been D 405. Now our proper journey is starting, time to board the train...
Six of us were venturing on an extended family excursion to the roots of my grandfather - more about it later. 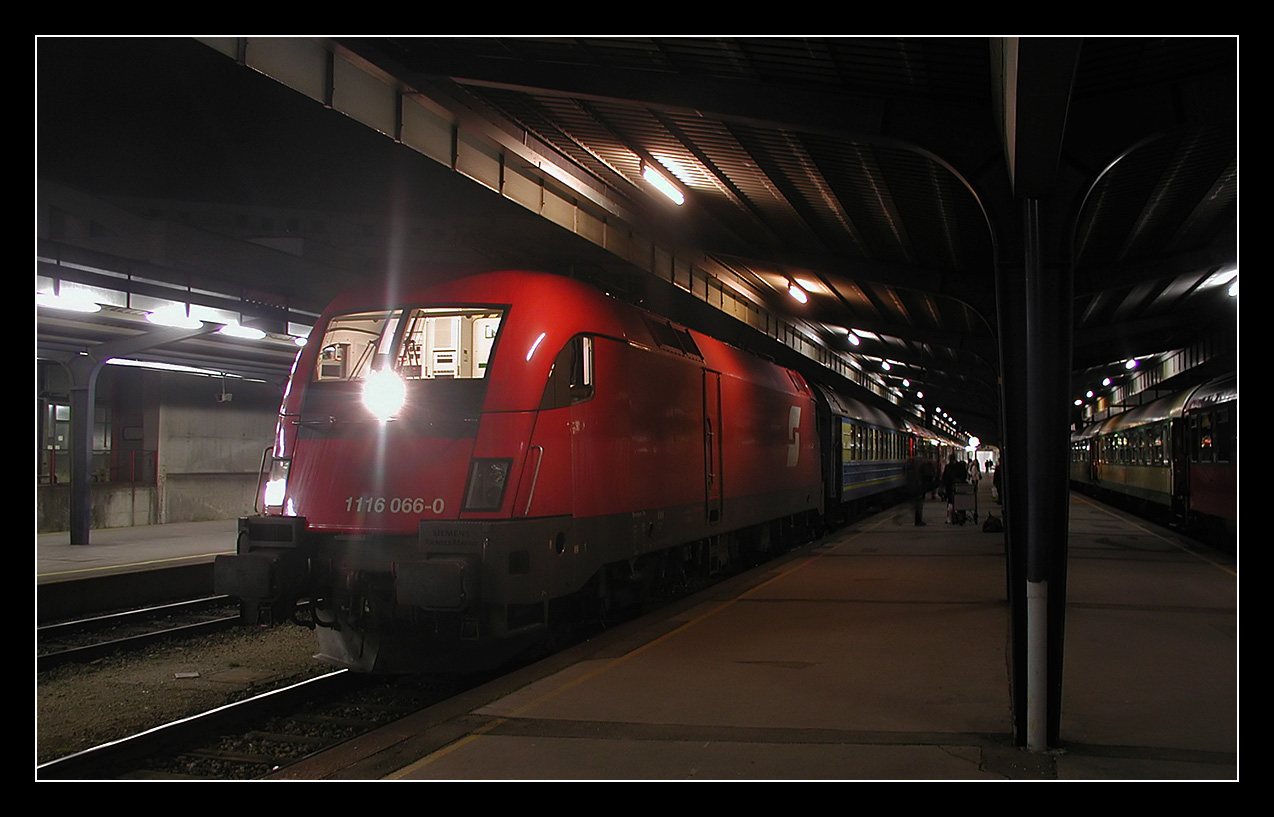 A PKP-daytime coach of "Chopin" was being loaded via a window.

The only class 1014 ever wearing an ad-livery - .011 "Railcargo Austria" - hauled REX 7603 to Bratislava-Petrzalka approaching Gramatneusiedl in the morning of August 6 2008 in front of the Vienna backdrop. 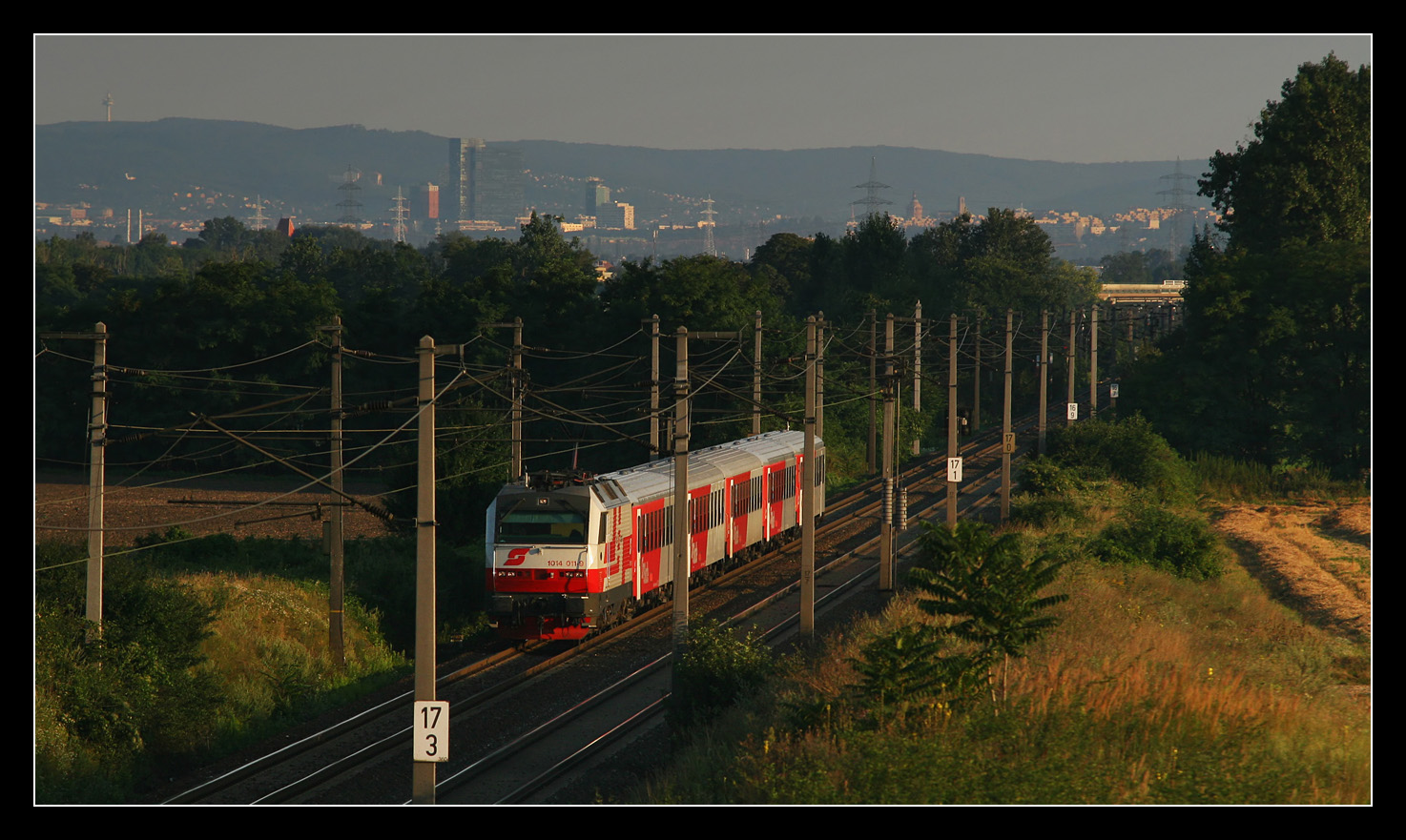 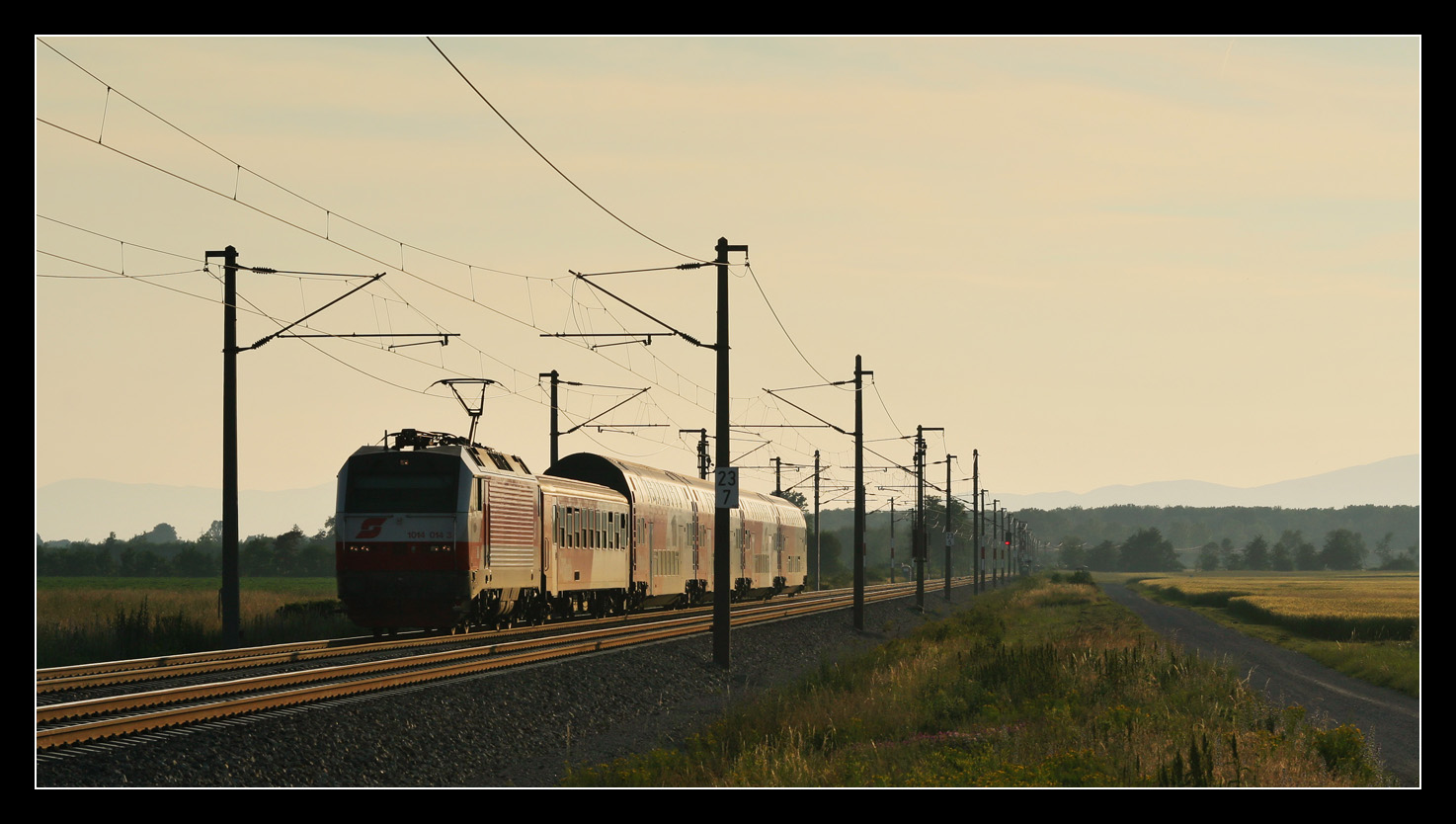 Behind Parndorf the lines towards Hungary and Slovakia split up - a sandpit provides scenic photo opportunities. For example, E 7617 to Petrzalka with the "Grand Canyon" on June 20 2005. 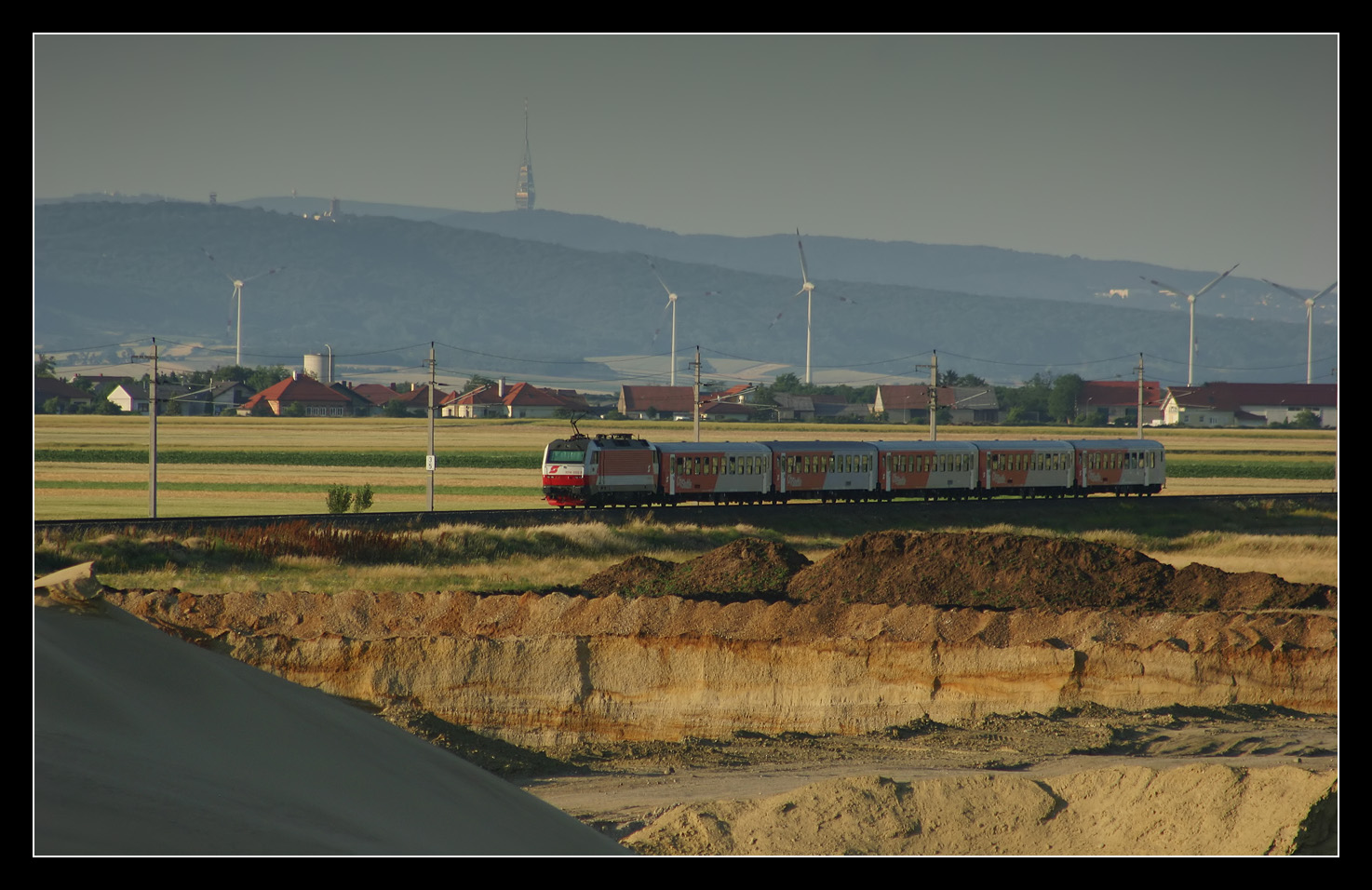 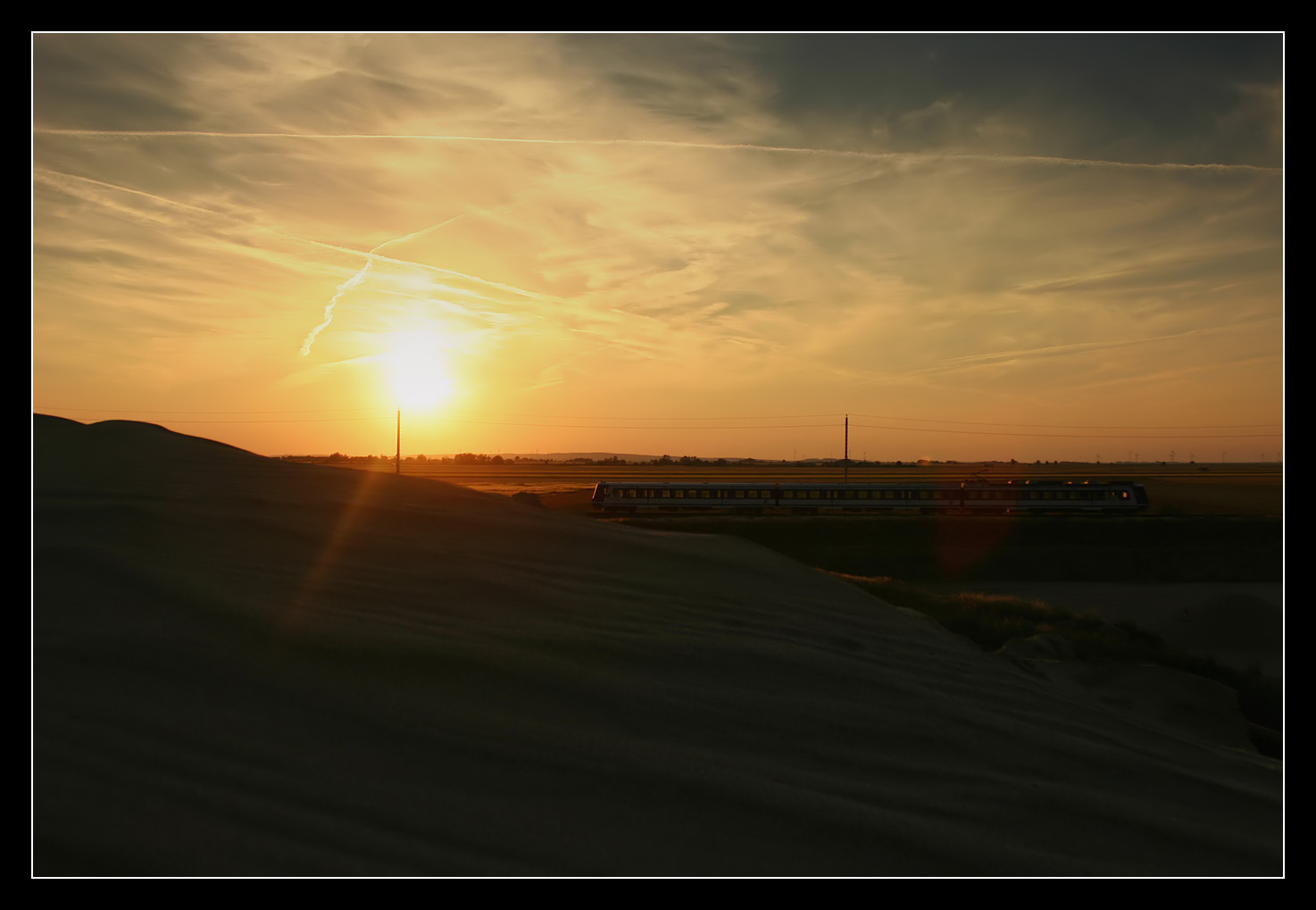 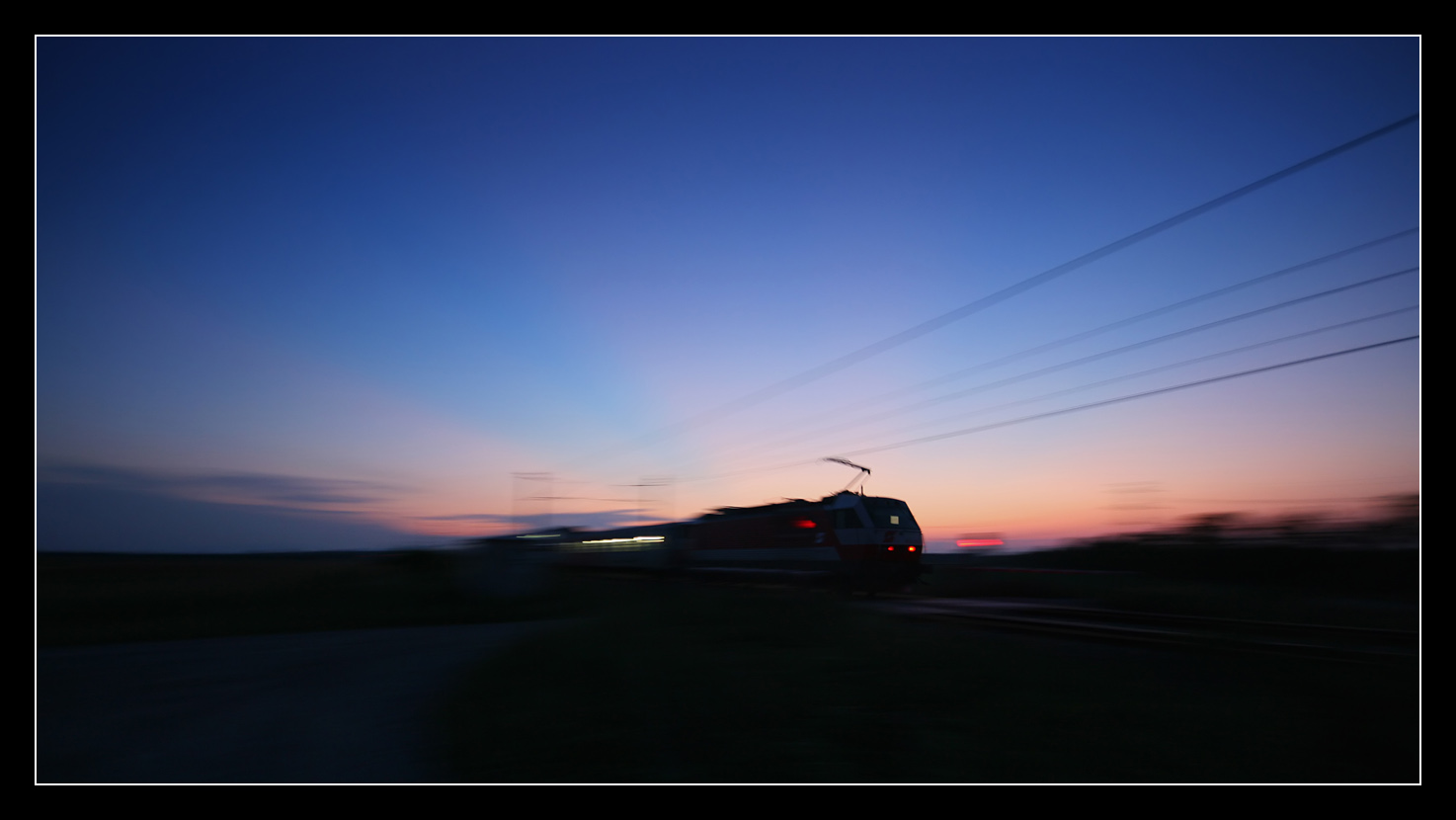 Inside the Ukrainian sleeping coach we have arrived at the Slovak boarder station Petrzalka in 2003 - shortly before Slovakia had joined the EU and later Schengen. A tall border-policewoman was strictly checking everyone, one poor lady from the Ukraine was forced to leave the train because she had forgotten to procure a transit visa for Slovakia. Nowadays such chicanes are a thing of the past - hopefully.
Soon afterwards we crossed the Danube and reached Bratislava Main Station before 11 p.m. Foggy mood photo from February 17 2011. 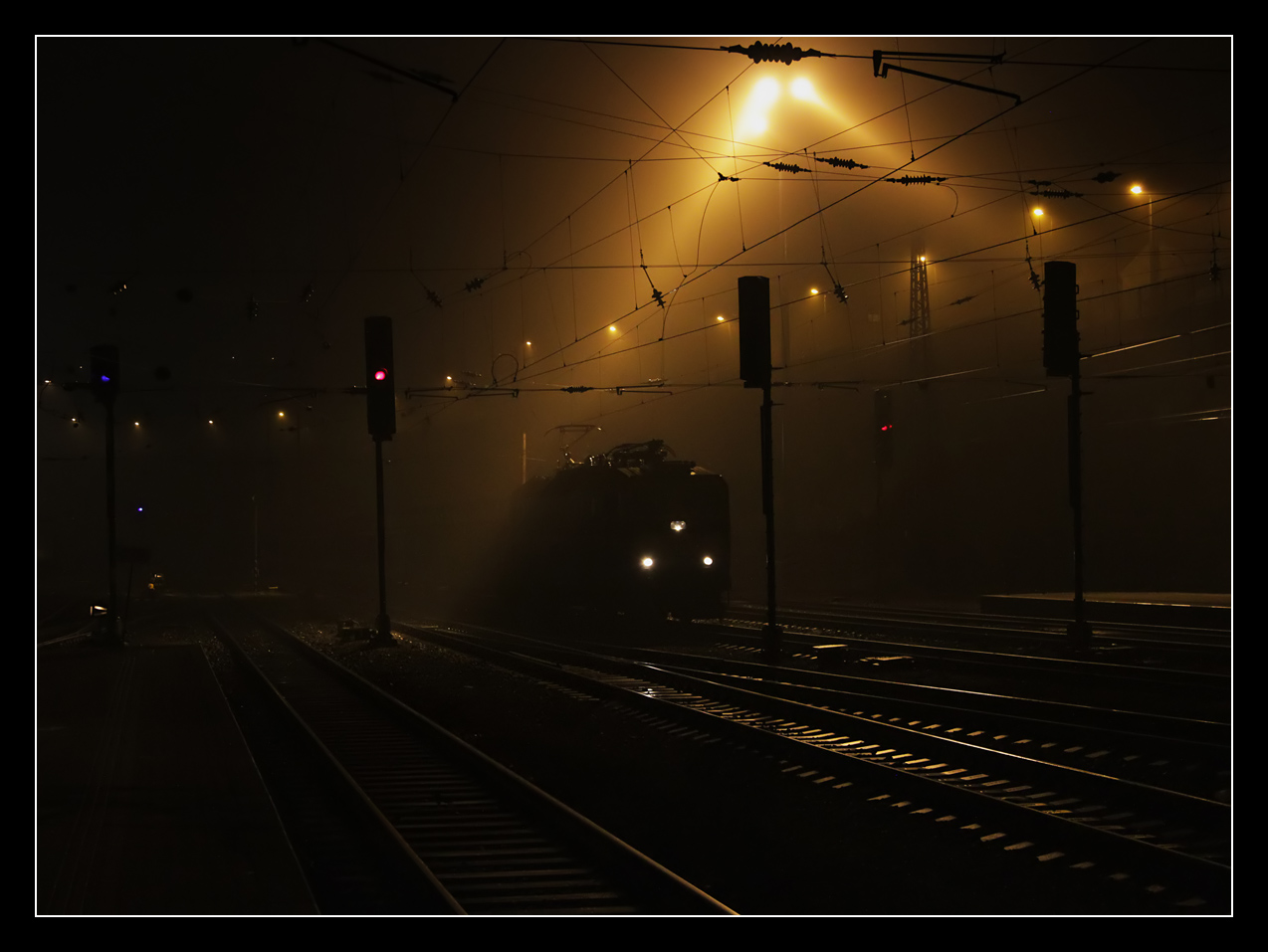 Our coach was coupled to R 613 "Zemplín" towards Kosice, then it was time to test our Ukrainian bed sheets which had been adorned by something which could clearly be identified as an Italian class ETR500 high-speed train. It would not be the last time we would encounter high-speed traffic being appropriated unfittingly by the UZ. ;-) 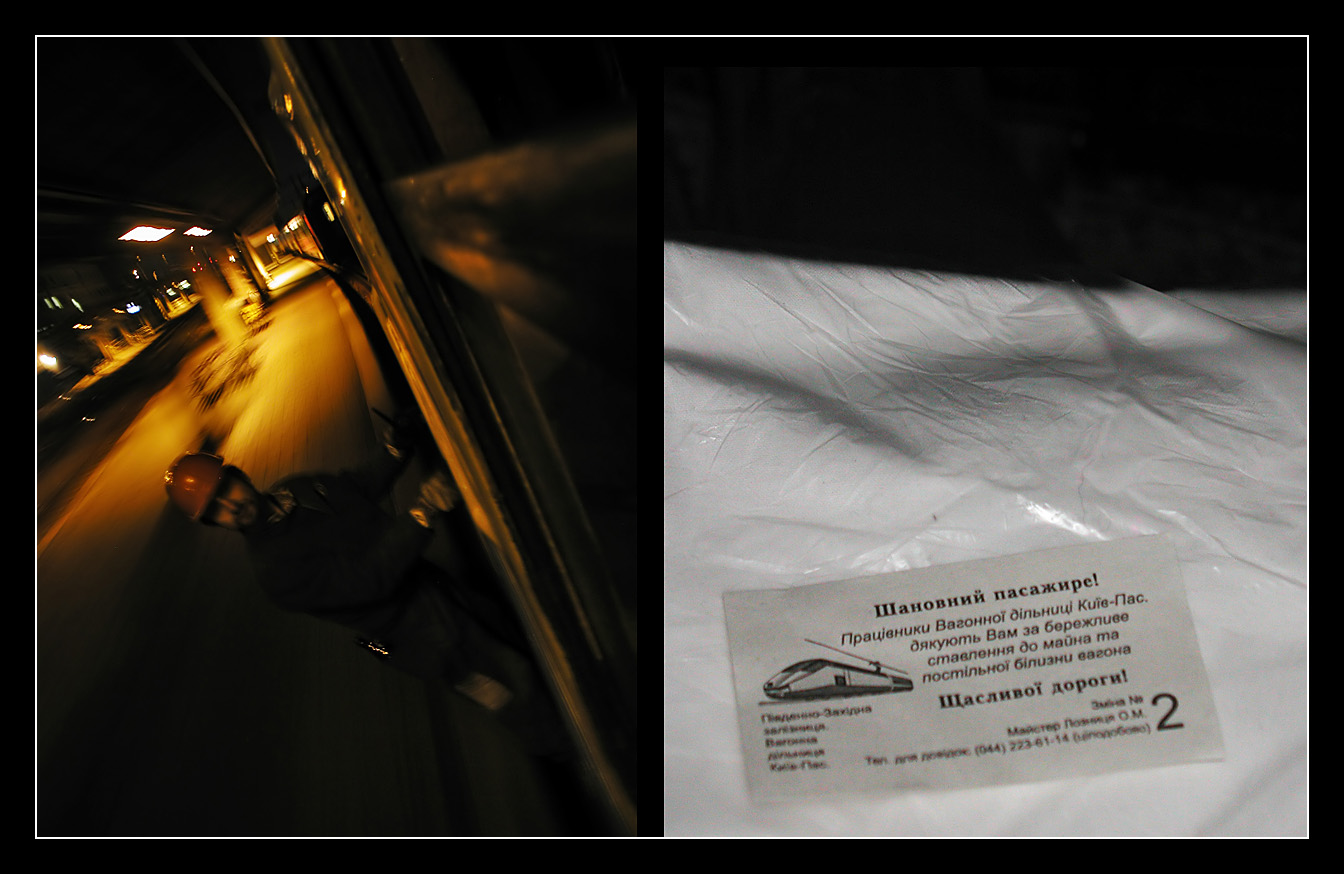 We rumbled west to east through Slovakia during the night.
Early morning mood images from Margecany and Kysak near Kosice on February 18 2011. 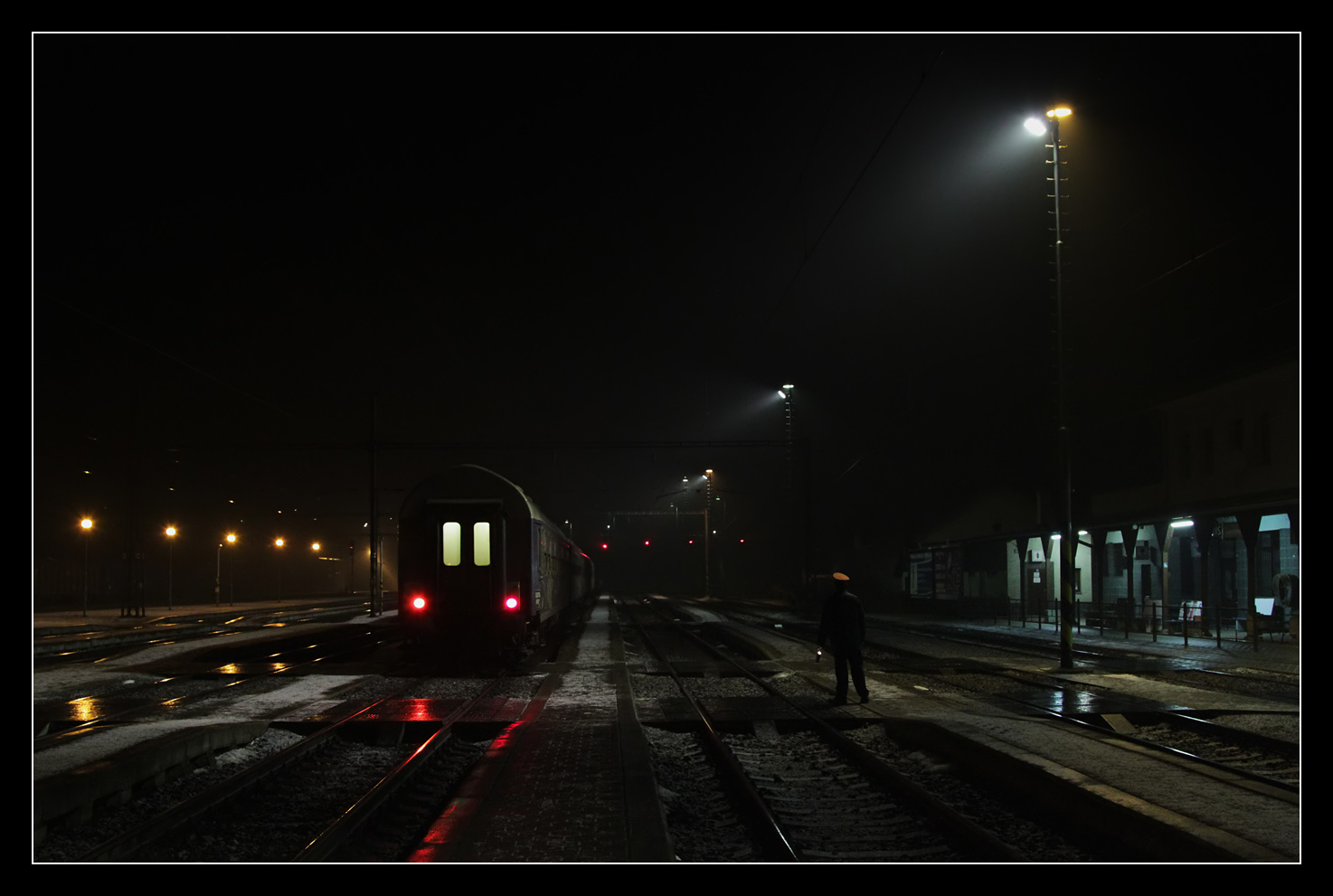 A cool Easter morning with rime on the ground.

R 379 "Vihorlat" Prague - Kosice had arrived at the opposite platform.

Behind a class 163 we rolled towards border station Cierna nad Tisou as part of R 221 "Dukla". In front of us: Slovak sleeping coach Bratislava - Kiev.

The line was just being modernized.

Departure towards the Ukraine! 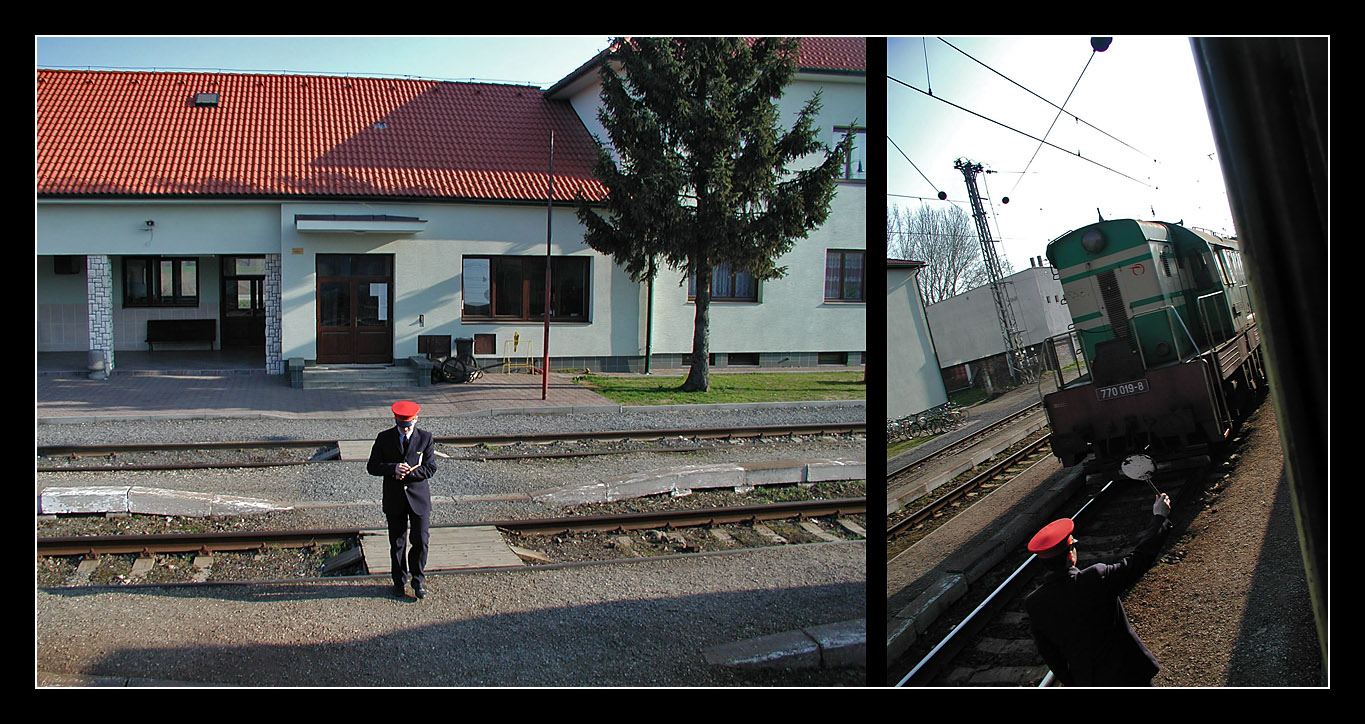 After stopping for half an hour at Cierna nad Tisou we reached the trijunction Slovakia-Hungary-Ukraine - and the domain of Russian broad gauge. We were welcomed by an UZ class VL11 ("VL" was of course standing for "Vladimir Lenin").

Standard- and broad gauge tracks are being intertwined at Chop border station. Old Slovak electric 140.042 had hauled as the last few miles, it had completed its duties.

Next time: Let's regauge! However, not until mid-August...