I assume with harvest season going on now, is the NLA railroad is running a few days a week from McGehee to Lake Village to the Epstien gin operation?

I thought the NLA had plans to run past lake Providence to the port and new chemical plant there. This development is going to throw a wrench into those plans. The port and the new plant WOULD have been a major source of business.
Jeff
T

The NLA and DSRR will interchange traffic in Lake Providence. The latest word is Feb. before thru service will be offered. NLA leases the tracks in the port of Lake Providence and DSRR has limited access. The new grain elevator and chemical plant are closed industry's on the NLA. The new DSRR guys are competent operators and we expect to do a good business with them. They are 'our' KCS outlet and 'we' are their UP outlet, plus we think we will have decent amount of online business.

DSRR is in the process of making a significant investment in their track and although this is taking longer than I hoped - I expect daily train operations will be seen in 2016.
T

OH, and, the covered hoppers were for Riceland in McGehee. They ship cars from time to time. When the line is open all the way thru, there will be many more for other industries.

Thanks for the updates, Tim. It's good to see that you survived another Louisiana summer.
M

Yes, thanks for the updates. It looks like another almost extinct rail line is slowly coming back to life. Great news.
Jeff
B

Thanks for the updates. Good to know in 2016 this line will be in operation.
Ben

Can someone post up some updated photos of the diesel roster? That paint scheme looks like it was based on the Illinois Central's classic passenger scheme.
T

I will abbreviate a long story about where paint scheme came from. When the D&R bought Locomotive #12 new from GE, they wanted to know the DR's paint scheme. The DR didn't have one, so the #12 was painted Safety Yellow and Safety Orange by GE's paint shop. We changed it a little by adding the black strip and the name spelled out on the long hood, so they would photograph better. So, the D&R, CSR, and NLA paint scheme was picked by GE.

If anyone is out and about on Saturday, the NLA 21 should be as far south as LA 2 just north of Lake Providence dumping rock. For the next 3 weeks, NLA will be dumping rock Sat-Thur with a McGehee turn on Friday. The railroad is really shaping up and through service with DSRR is set to be offered on May 1st.

Can anyone get a picture?

Well, something always happens, rock dumping did not start today due to rain and flooding. It will be early next week.

I have two (not very good) pictures of MoW trains in Eudora, AR. Repair work continues. 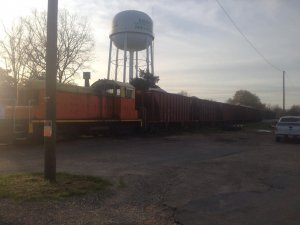 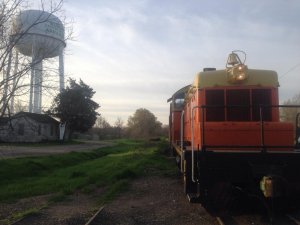 did you have any major flooding damage from the recent "monsoons"?
Jeff
T

A few small wash outs down south of Eudora. Nothing too bad.
M

Well, that is good to hear.
Jeff
B

thanks for sharing these pictures.
ben
B

Any new updates on the work on the line & any new photos to share?
ben
T

I have spent so much time in Little Rock and Pine Bluff stamping out brush fires that I haven't been down in few weeks to check on things. I don't know when the first train will be but the line is going to be declared 'open' on June 1st. I expect as needed service mainly for complex chemical traffic with some occasional cotton seed until Myriant chemical's tracks are ready. The estimate on that is Aug-Sept. We have everything ready on the end that I control - ISS, junction code, station codes, etc. I will of course post, if I know a head of time before the first revenue trip. I don't have any with me but from the pictures I've seen, the railroad looks amazing from Lake Village to Lake Providence considering what we started with.

Looks like you guys have been busy. Hopefully we can create more room in the yard when you guys start those operations. What will the Myriant traffic consist of? There's going to be a lot of Interchanging going on in McGehee with our Clearwater Interchange and your new customers.
T

I expect Myriant traffic to start in couple of months but Complex Chemical traffic should start soon. I think we're going to start with bi weekly service until Myriant starts but we should be interchanging somewhere around 200+ cars a month once Myriant starts. A lot depends on rates because our KCS and BNSF traffic will go south.
You must log in or register to reply here.
Share:
Facebook Twitter Reddit Pinterest Tumblr WhatsApp Email Share Link