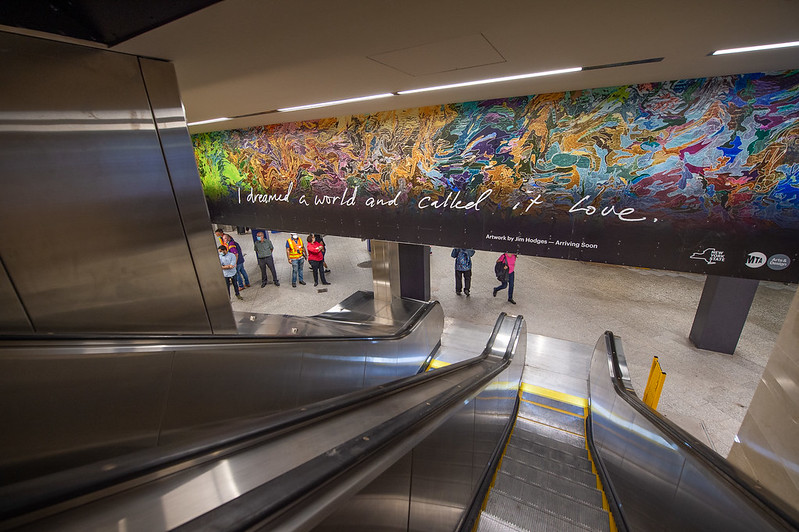 
​
The Metropolitan Transportation Authority (MTA) today announced the completion of major upgrades at 42nd St.–Grand Central – the busiest subway station entrance in New York City. The project included a total replacement of two escalators, an adjacent stairway and a newly replaced elevator leading to the subway station. These upgrades are part of the larger 42 St Connection Project, which will modernize key elements of the Times Square, Grand Central, and stations in between the 42 St corridor.

The entrance leading from the mezzanine of Grand Central Terminal into the subway is the busiest entry point in the New York City subway system, with approximately 135,800 combined daily entries and exits in pre-pandemic times. Work was completed in 19 months from its January 2019 start, ahead of the initial projection of 26 months, cutting about 25% from the project schedule.

“These accessibility improvements, at the busiest entrance to our subway system, were delivered ahead of schedule and will greatly improve our customer experience in and around Grand Central station,” said Janno Lieber, President of MTA Construction & Development. “Bundling multiple like projects under one, accountable and empowered, project lead is the new way of doing business and it is what has us bringing in projects on time and on budget.”

“When you think of the hustle and bustle of New York City, Grand Central is one of the landmarks that immediately comes to mind,” said Sarah Meyer, Chief Customer Officer of New York City Transit. “Ensuring one of our marquee stations has state-of-the-art accessibility is a crucial piece to the overall project in modernizing one of the most frequented areas in our system. This is just one piece to the bigger puzzle, but we are excited to keep this momentum going.”
Early on during the start of construction, the project was re-phased so that customers had access to either the escalators or stairway for the duration of the project to improve customer experience and circulation. In early June 2020, the entire entry point was removed from service to give the contractor total access to accelerate work while there was low customer volume at Grand Central due to the pandemic.

As a result of the re-phasing, the stairway replacement was completed in seven weeks compared to its original 8-month projection. The old stairway was fully gutted and replaced with a wider ADA-compliant stairway - including brass railings to match the elegant and historic finishes of the Kenneth Cole stairway. This re-phasing also allowed the escalator work to be completed early reducing the outage by six months. Crews replaced existing escalators with more modern technology that will deliver a smoother ride and includes new self-reporting diagnostic technology that will result in better overall performance for commuters.
With this new technology, the escalators will have the ability to send an alert in real-time detailing any potential issues to maintenance crews, allowing for quicker turnarounds on service repairs and fewer outages. The replaced elevator also includes this new diagnostic technology, allowing for quicker turnarounds on any repairs and reducing the length of potential outages overall. In addition to the new tech, the elevator has a brand-new cab and machine room that will vastly improve customer experience.

Other installations include replacing incandescent lighting with more energy-efficient LED lighting that cuts energy use by about 40-percent. Mirrored-glass artwork by artist Jim Hodges will be installed over the stairs and escalators later this year.

This is a continuation of the work completed earlier this year at Grand Central station. In February a 1,500-sq. ft. mezzanine was opened with two new stairways and a new fare control area. The Hyatt Core was completed a few weeks later, expanding the mezzanine space. In May, the elevator to the