I thought some of you might enjoy an update to the final phase of the rail-relocation project of Brownsville, Texas. Brownsville situated at the very bottom of Texas and on the border with Mexico. The Rio Grande separates the two countries as well as the "Border Wall". Why Brownsville wants trains out of its town can be found in my previous thread from 2005.

The new rail line will connect with the current Olmito yard about 12 miles north of Brownsville. It will cross into Mexico near the town of San Pedro. It is set to open in October 2012. My photos were shot the last week of June.

Here's a map that shows the new line (purple). The dash lines represent the former rail lines into the city. The ex MoPac is still in use, but the SP has been converted into a bike trail.

Two views of the new line crossing over Hwy 281; the border paralleling road.

Some views where customs will inspect inbound trains. Notice how the trestle scrapes over the border wall.

Views from one of two at-grade public crossings. These are from New Carmen Ave. The tracks after going north from the border swing to the east to connect to Olmito yard. The tracks traverses the boundaries of the Resaca State Park. I am guessing speed to be 20 to 25 mph. I was surprised to see the concrete ties were in place.

More views. Due to farming and the need for access; there were a few breaks in the laying of ties.

Detailed views of the inspection areas. When trains are running here, I won't be up here.

Some views from dangerland. Areas along the river are prone to smuggling of drugs and humans. I was accompanied by two others when I took these photos from the car. We did not tarry and hang around. People are watching~ good guys and the bad guys. `

As you can see, the final span over the Rio Grande has yet to be lifted into place. Workers in Mexico had ladders and were working on the trestle structure.

Some final views of the new bridge.

Along the border wall and shot from nearby Progresso. This depot is the only MoPac depot that survives in the Rio Grande Valley.

I will add some historical scans of the previous rail construction when time permits.

Very interetsing, thanks for sharing.
S

Thanks for posting! I was in Brownsville & McAllen 2 weeks ago.

Here is a small update to the project. It now has rails and initial ballasting, but lacks tamping, grooming and a grade x-ing to be completed. I visited the site during spring and summer, but everything looked the same so I didn't upload any more photos. These are from 11-2-13. 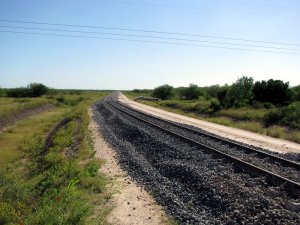 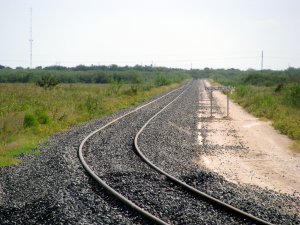 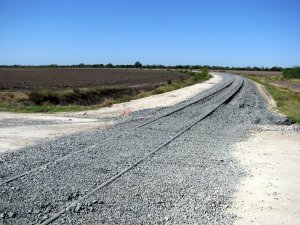 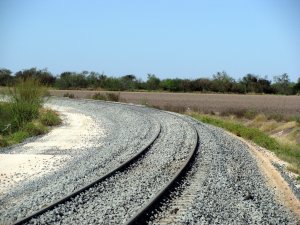 Thanks for the update. I am surprised at how long this is taking...... going on nine years now according to your first posts.
Last edited by a moderator: Nov 11, 2013
S

Bill Anderson said:
Thanks for the update. I am surprised at how long this is taking...... going on nine years now according to your first posts.
Click to expand...

Things move at a slower pace in some places. Matamoros is a dangerous place to pass through let alone work. My uncle plays golf right on the river (on the US side)
and he says he hear gun shots all the time. He was also in Brownsville government (not to give his identity) in the 90's and early 2000's and they had problems with crossings being blocked. UP long held that it was more cost effective to recieve citations rather than remove grade crossings.

On 3-31-15 a private ceremony marked the official completion of the project. However, actual operations are still a few more weeks away.

I have included an aerial that shows the changes that are occurring at the Olmito Wye.

The letters A and B are for reference to photo locations. 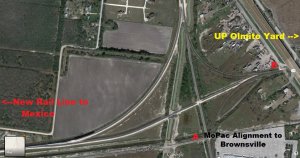 From Photo Reference B

These views show the new rail line to Mexico cutting thru the original Mo-Pac alignment. There was a gap (missing concrete track panel) that allowed southbound trains to bypass the Olmito yard and continue on their way to downtown Brownsville. The turnout has been removed at the north end of the wye so there is no longer a direct way for north/south trains to get around the yard. Track remains connected from A to B because trains to Mexico still must go thru Brownsville until the new line is ready to go. 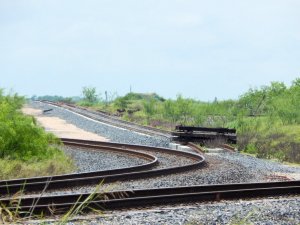 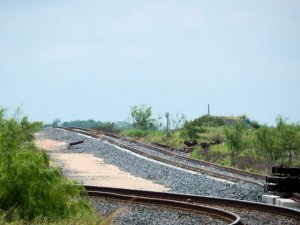 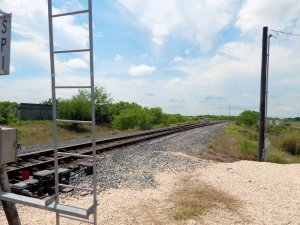 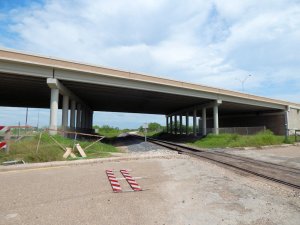 For some reason the track switch that was installed at the north end of the wye was cut into several sections and dragged to this spot. 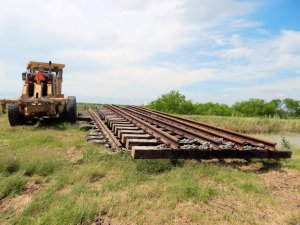 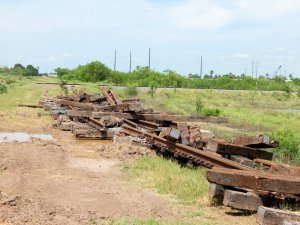 Looking south; this trackage into downtown Brownsville will be abandoned. There is no hurry to remove this turnout unlike the one that was located at the north end of the wye. 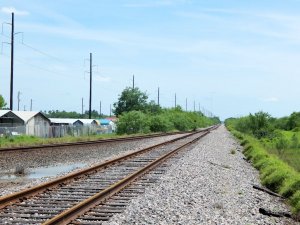 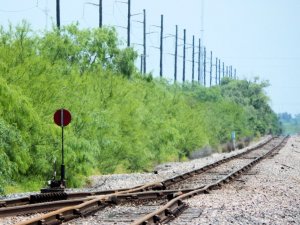 Looking north shows that the original Mo-Pac line to Brownsville has been severed for the new line. This segment of track is no longer connected at the north end of Olmito wye. 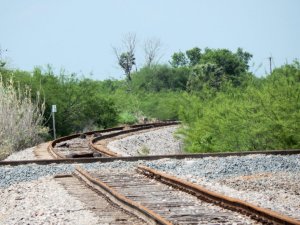 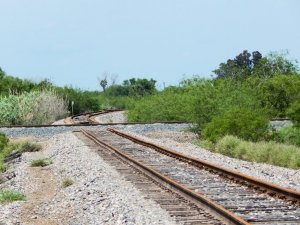