OK, it's been awhile. I had to replace my 50D quickly when it went bonkers 2 weeks before a trip to Hawaii. Any time I have to get a new camera there is a bit of learning needed, so I crammed a lot into that 2 week window. But not many trains....

So Sunday afternoon I made a trip to Rosenberg (TX) to play catch up. Not as busy as I wanted, but did catch at least one of each major (UP,BNSF,KCS) that runs thru Rosenberg on their way to/from Houston. Here's the pick of the litter, a BNSF DPU rolling outbound.

And as it always works out, a new camera (Canon 6D) needed a new updated editor (Paintshop Pro x6), which this is the 1st effort (just got that tonight!).
Lotsa re-learning curve. 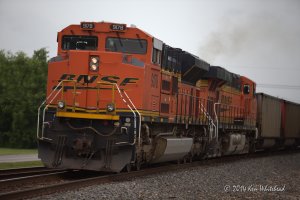 Congrads on the upgrade & good catch. The 6d sounds like a big step up. Hopefully they just added more bells & whistles to PSP x6. I'm still on PSP 9 with my XP computer. We got a Win 7 computer recently with a stripped down version of Photoshop.

I'm still using my 30d with no chance of upgrading in the near future unless I upgrade my wife's handbag with the equal amount of money spent. We were suppose to make a Hearne railfan trip this weekend but things came up. I could definitely use a Rosenberg fix.

The 6d is amazing. The low light capabilities are incredible, which is not a big deal trackside as much as indoors with my grandsons! As the 50d died my 10d hangs in there as a very capable backup.

I am still kicking myself for not buying a slightly used 1Dx for sale at my local camera shop. As my grandfather said, even bargains cost $$$$.

I have a 7D, 5DII (broken), and a 5DIII. I really don't need the extra electronic gizmos of the 6D (GPS, Wi Fi, etc). If I were to upgrade, it would be to the 1DX. Its ability to handle high ISO settings would be very useful in my twilight owl hunts at a local park.

If you have seen my owl photos on the Pacific Northwest Photography Forum.......
http://www.pnwphotos.com/forum/showthread.php?9697-It-s-Owl-Season-Again

.... you know there are times I could really use a camera with high ISO, low noise capability. I don't know if those times are frequent enough to justify/rationalize the purcha$e of a 1Dx. I certainly don't need one to photograph trains from MP 18.

But enough of me. I'm looking forward to more photos from your 6D once you get the technical issues sorted out. One of our local bird photographers recently purchased a 6D. He told me that he disabled the GPS and Wi Fi features because they were a tremendous drain on the camera's battery.

Bill Anderson said:
He told me that he disabled the GPS and Wi Fi features because they were a tremendous drain on the camera's battery.
Click to expand...

the GPS seems to be a feature I'm leaving for 'some day', haven't seen the need for it yet as I am generally fairly certain of my location. Whether or not anyone will need it in the EXIF data 100 years from now is doubtful.....for those that wander about in remote areas, I can see some utility. It would have helped in some vacations past where I struggled a bit with remembering the name of the gyser at Yellowstone for example.

The wifi is handy and i have used it some, so far just as a remote control; it did save me from having to buy a new wireless remote as the one I had for the 50d is not compatible. The upload feature is a bit of a non-feature as it only handles JPGs. typically if I want to post something immediately I simple take the pic with the phone anyway.

But with those off, as is my current method, the battery life is very impressive, much better than the 50d.