Metro-North Welcomes Visitors Back to Grand Central With Live Pianist 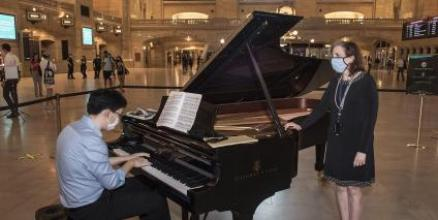 Metro-North Welcomes Visitors Back to Grand Central With Live Pianist

Trains pulling in and out, train departure announcements echoing through the concourse, and the ambient hustle and bustle of visitors all make up the typical Grand Central Terminal soundtrack. To help ease back into the daily routine, New York’s most iconic transit hub launches a dedicated Spotify channel featuring a variety of playlists for commuters and visitors to enjoy as they return to everyday life. Grand Central Terminal has teamed up with some of the city’s most iconic musical institutions to offer its visitors an enjoyable experience as they start their day, ride the train home, grab breakfast, lunch or dinner.

Titled GCTtracks, this new channel is free and accessible on Spotify by searching ‘Grand Central Terminal’. The four introductory playlists are curated by Steinway & Sons, Lincoln Center for the Performing Arts, Carnegie Hall and Joe’s Pub and showcase the diversity and richness of New York City’s music scene. Additional playlists will continue to be released ongoing.

“This is a wonderful way to welcome visitors and Metro-North customers back to Grand Central Terminal,” said Catherine Rinaldi, Metro-North Railroad President. “Grand Central Terminal’s 107-year history has connected so many New Yorkers and visitors – and today the sounds of live music echoing throughout the Terminal being played by the talented students of The Juilliard School, will connect us all again. As people return to commuting and visiting Grand Central Terminal we ask that they remember to wear masks for everybody’s protection, and respect social distancing to the extent possible.”

To further bring GCTtracks to life, Grand Central welcomed Steinway & Sons to the Terminal on Tuesday. For one day only, visitors to the Terminal get to enjoy the sounds of live piano music beneath the iconic constellation ceiling as students from The Juilliard School perform a repertoire on a Steinway from the famed Steinway NYC Concert & Artist bank of pianos. Performances taking place in the center of the Terminal by the clock throughout the day between 6 a.m. and 7 p.m.

Additionally, Grand Central Terminals retail stores and dining choices continue to re-open to visitors and commuters. For more information on the status of our stores, click here.

Each GCTtracks Spotify playlist features the best of New York’s music brands, including:

Steinway & Sons: Since 1853, Steinway & Sons has patented and crafted the finest collection of pianos, each made by hand. Each Steinway & Sons instrument is a masterpiece of artistry and a consummate work of art; every piano created has its own musical character and is as unique as the individual who plays it. Steinway & Sons’ Spotify playlist showcases diverse musical genres from across the globe and is delighted to collaborate with Grand Central Terminal to provide music for your journey — wherever it may take you.

Carnegie Hall: Carnegie Hall’s mission is to present extraordinary music and musicians on the three stages of this legendary hall, to bring the transformative power of music to the widest possible audience, to provide visionary education programs through its Weill Music Institute, and to foster the future of music through the cultivation of new works, artists, and audiences. Carnegie Hall’s playlist showcases a snapshot of the 2020-2021 season’s highlights from the world’s greatest artists. Featuring some of the most magnificent orchestras, star conductors, virtuoso recitalists, brilliant jazz, pop, and folk artists, this playlist has something for everyone.

Joe’s Pub: A program of The Public Theater, Joe’s Pub plays a vital role in The Public’s mission of supporting young artists while providing established artists with an intimate space to perform and develop new work. It showcases the diversity and richness of New York City’s music scene and selections from the Public Theater's musical legacy. True to spirit, listeners to the Joe’s Pub playlist will be treated to lush covers, feel-good nostalgia rock, virtuosic gypsy jazz, salsa/funk/Caribbean fusion, and Carnatic grooves all once performed on the Joe's Pub stage, as well as favorites from The Public’s musicals throughout the decades. It’s a feast for the ears.

About Grand Central Terminal:
MTA Metro-North Railroad is the steward of Grand Central Terminal, which stands as one of America’s greatest transportation hubs and one of New York City’s most iconic buildings. It is both a national landmark and an international example of the success that can be achieved giving new life to a historic building that otherwise may have been destroyed. The Grand Central brand reflects the remarkable caliber of services in the Terminal, including boutique restaurants and cocktail lounges, a gourmet market, and many specialty shops. It draws more than 750,000 national and international visitors each day and wows them with its varied offerings and tour programs. Storied Vanderbilt Hall, once the waiting room for long-distance travelers, is among the most-desired public event spaces in the city.