I headed south today. It's 50 degrees in February. Hooray!! A short wait for this KCS grainer just north of Firth NE USA. I had been wanting to photo a train from this locale for a while. The old line is to the right and the new grade is left. This is the BNSF St Joe line from Lincoln Ne to Kansas City. It heads generally SE towards northern Missouri and connects with the Napier Sub south of Fortescue Missouri. I also tried out my Christmas present of a Sigma 150 to 600mm Lens. I like it but you got to have a sturdy tripod.

From the Cortland Road Bridge, Note the end of the nearly 90 car train to the right. Long S curves that go to single track just in the shadows of trees upper right. 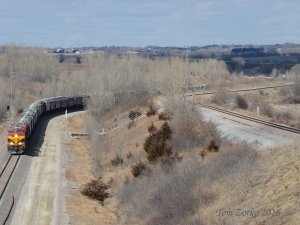 From the Cortland Road Bridge 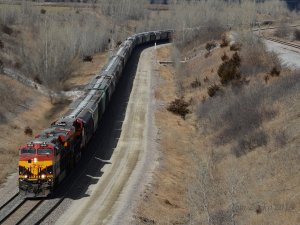 From East of Sterling NE(Sigma) 500mm 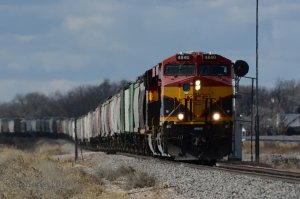 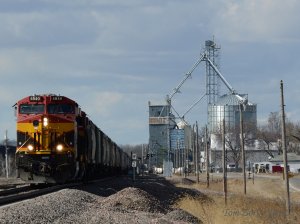 I stopped to try the new lens on some geese at Verdon and got too far behind to catch the train on the Rulo Ne. bridge, but here is what the imposing structure over the Missouri River looks like. 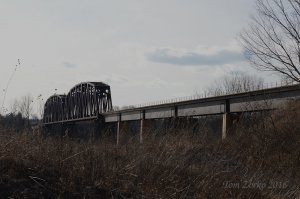 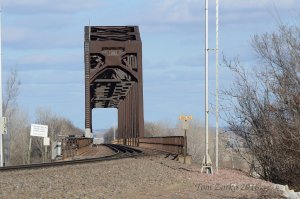 CGW101c said:
I also tried out my Christmas present of a Sigma 150 to 600mm Lens. I like it but you got to have a sturdy tripod.
Click to expand...

My bird photography buddies that shoot with the new Tamron 150-600 zoom are using monopods. They find a monopod to be lighter and have more portability than a tripod while still holding the camera steady.

Checking a Nebraska map, does that grade take the line west out of the Missouri River watershed? Will another track be added to the new Right of Way or is that a maintenance road? That looks like new ballast on the old line. Will it be saved and used as the downhill track of a multi track mainline?

The area looks very interesting. I'm looking forward to more photos of it and the Rulo bridge.
Last edited by a moderator: Feb 21, 2016

My brother-in-law has a monopod he wants to give me. I would like to try it although the wind was pretty strong today and was shaking the tripod. Maybe a 50lb weight on the bottom will keep the prairie wind at bay. The grade in the first photos is heading SE taking the line out of the Platte River watershed toward the Missouri River along the Nemaha rivers (big and little). The Platte River is about 30 miles north of Lincoln (our state capitol) and the Big Blue River that flows south into Kansas is west of Lincoln. It would be really interesting to see that end of Nebraska 1000 years ago to see what created the hills south of Lincoln. A far as the tracks, it looks like like they could build a 2nd track but the old line is concrete ties and new ballast. Most of the trains from KC go up the Napier Line to Pacific Junction and then turn west and head toward Lincoln. The St Joe line is single track most of the way. I'll do more research maybe get the topographic maps for SE Nebraska.

Thanks for the reply. Many people out west think the Midwest is as flat as a table. I know from visits and living in Chicagoland that this is not the case for some parts of the area. And we all know that grades barely discernable to the eye can create operational problems for railroads.

Most people that drive through Nebraska drive on I 80. It is indeed flat as it follows the wide Platte valley all the way to Wyoming and Colorado, that's why UP runs along the Platte river, but 20 miles either side are pleasant hills and valleys. Not as impressive as the PNW of course, but each part of the country has a certain appeal.

I going to throw 2 more pics from the bridge. The first one is looking down with conductors wave and the 2nd is the view to the south with the 300mm zoom. It shows how far they cut the track down. Now the old line is high on the left. And the road bridge is way up there. 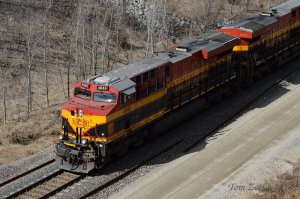 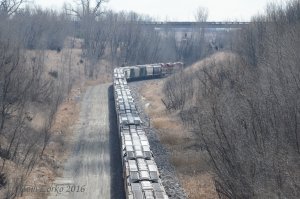 You probably won't be able to get both lines in the same photo once the trees leaf out.

Nice photos Tom. That always looks like a nice area when I see the photos, but I have yet to make it down there.

Having lived in KC for roughly 5-6 months, I have yet to see a KCS train... Nice shots! Always wanted to check Firth out while I still lived in Lincoln.

Thanks all. We have regular KCS trains in Council Bluffs/Omaha. There is at least 1 grainer every week on the BNSF or the UP. I do miss the oil trains because they usually had NS heritage units. Maybe next year I can retire and spend gobs of time at Ashland and just watch every train that comes by.
You must log in or register to reply here.
Share:
Facebook Twitter Reddit Pinterest Tumblr WhatsApp Email Share Link