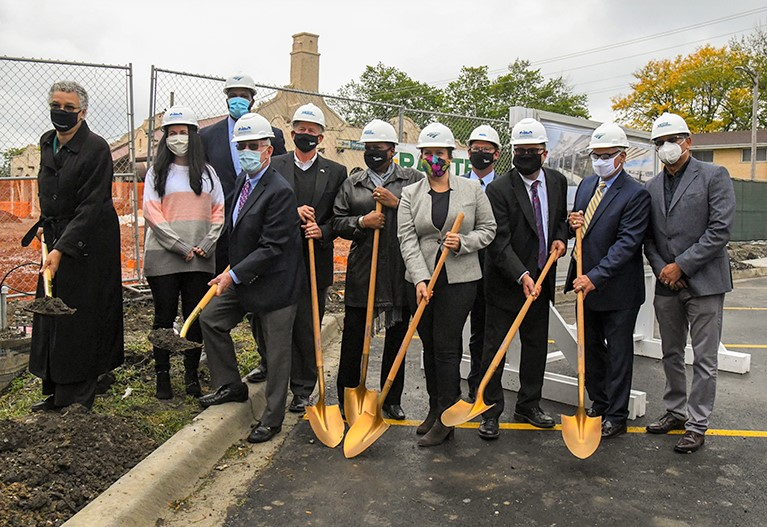 Full access from both sides of the tracks, tunnel, station and platform work under way following ceremony
HOMEWOOD, Ill. – Improvements to Amtrak and Metra customer facilities at the shared station in Chicago south-suburban Homewood were celebrated this morning by federal, state and local officials formally beginning a combined $29 million construction project that will continue through spring 2022.

Now underway on the west side of the tracks owned by Metra and CN Railway, Amtrak is using $15 million of federal funds it receives for compliance with the Americans with Disabilities Act (ADA) to replace the stairway and augment the stairs with an enclosed ramp, allowing all customers to access the tunnel under the tracks to both the Amtrak and the Metra train platforms.

Metra electric trains and Amtrak diesel-powered trains operate on separate tracks with different platform heights. Also included are ADA improvements to the unique former Illinois Central Railroad station built in 1923 and a level path between the building, parking, and the stairway/ramp entrance to the tunnel. Across the 46-state network, Homewood is the largest Amtrak ADA project this year.

As part of the project, the 109-year-old tunnel will be waterproofed, provided with upgraded lighting, drainage and ventilation systems, and graffiti resistant finishes. In addition to transit access, the tunnel also connects the community, joining the downtown retail district on the east side with the residential area and Ravisloe golf course on the west side.

“Amtrak is committed to fulfilling the promise and obligation of ADA. For us to truly be America’s Railroad, we must be the railroad accessible to all Americans,” said Amtrak Vice President David Handera, DSL, who heads up stations and accessibility capital projects across the U.S. “Projects such as this at Homewood, once completed, open up travel opportunities for all, without barriers.

“The project here in Homewood provides an example of what can be done in creative partnership where multiple parties own pieces of the facility,” Handera added.

“We’re pleased to be able to move forward with the Homewood Station project with our partners at Amtrak, CMAP, Cook County and the Village,” said Metra CEO/Executive Director Jim Derwinski. “To truly serve a community, public transportation must be accessible to everyone and this multi-modal project will improve access for all who work and live in Homewood to Metra, Pace and Amtrak services while providing a modern and welcoming gateway to the community.”

“These updates will allow residents, visitors, and commuters the ability to safely and easily access the trains. We are grateful to all partners for their financial contribution for the Amtrak station’s ADA renovations,” said Homewood Mayor Rich Hofeld. “The Village of Homewood is grateful to all partners for their contribution to the Amtrak and Metra station’s ADA renovations.”

“CMAP is proud to play a role in supporting the Homewood station renovation” said CMAP Executive Director Erin Aleman. “An accessible Homewood station will encourage transit usage and help reduce congestion and improve the quality of life of its residents.”

“The Homewood station is one of the central, premier train stations of the South Suburbs. Hundreds of thousands of people use this station each year. With this remarkable modernization and new ADA renovations, even more of our citizens across the South Suburbs will have easy access to Chicago and beyond,” said Rep. Robin Kelly (D-Ill.).

“One of the vital roles of County government is to ensure that we support a robust transportation infrastructure,” said President Cook County Board President Toni Preckwinkle. “This project will benefit our business community and also enhance the quality of life and economic opportunities for our residents.”

“The rehabilitation of the Homewood station is a great example of the number of exciting improvements being made to the rail system in Illinois under the leadership of Gov. JB Pritzker,” said Acting Illinois Transportation Secretary Omer Osman, who was represented at the event by Deputy Secretary Doug House. “Working together with our partners across the various modes of transportation, we are committed at IDOT to strengthening the state’s vast transportation network to provide safe, reliable travel options that are accessible to all residents.”

Three daily Amtrak trains typically serve Homewood and the station is ordinarily used by 54 Metra Electric District Trains on weekdays and 40 on weekend day. All Amtrak and Metra services have been temporarily reduced due to the COVID-19 pandemic.

Amtrak MidwestSM service in Homewood by the Illini and Saluki trains sponsored by the Illinois Department of Transportation between Chicago and Carbondale and the Amtrak City of New Orleansto and from its namesake city has been temporarily suspended during this phase of the project because Amtrak trains are passing through Homewood without stopping. Shuttle bus service between Homewood and the next Amtrak station to the south in Kankakee is included in the Amtrak fare.

More project details are on the attached fact sheets. The intermodal nature of the project also includes a reconfiguration of the Pace Suburban Bus station, which serves as a terminal for three current routes.