Link to the video:
https://youtu.be/4dl-qDnduFM

The timetable for this part:

We were staying on Tâmpa, the local mountain of Brasov, and decided to walk downhill. On the way the cable car path is crossed by several serpentines. Other than that you hike through forest along a steep, rocky slope, not really a leisurely stroll. Especially the sections between serpentines are strangely flat, so you have to walk quite a distance to lose altitude. 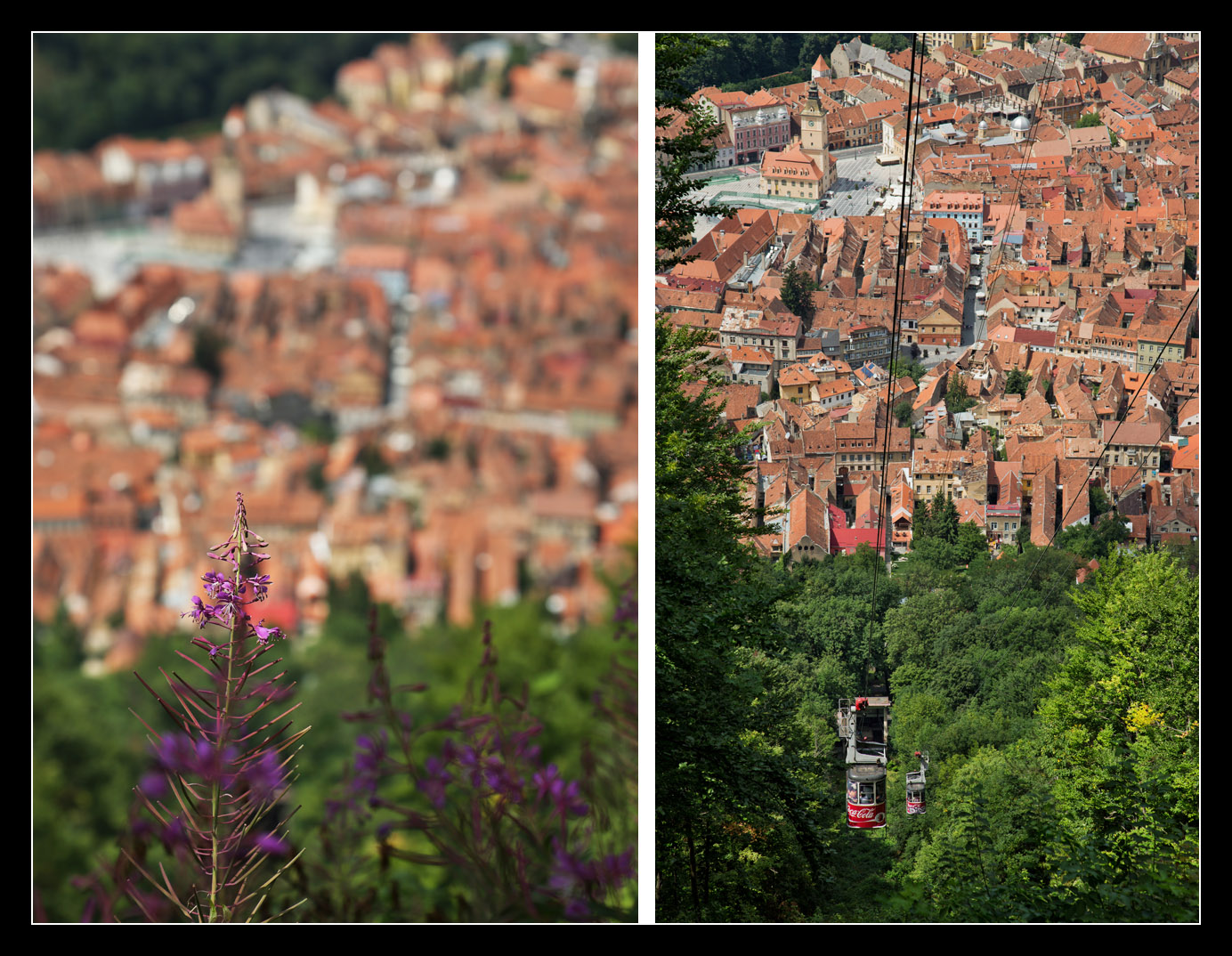 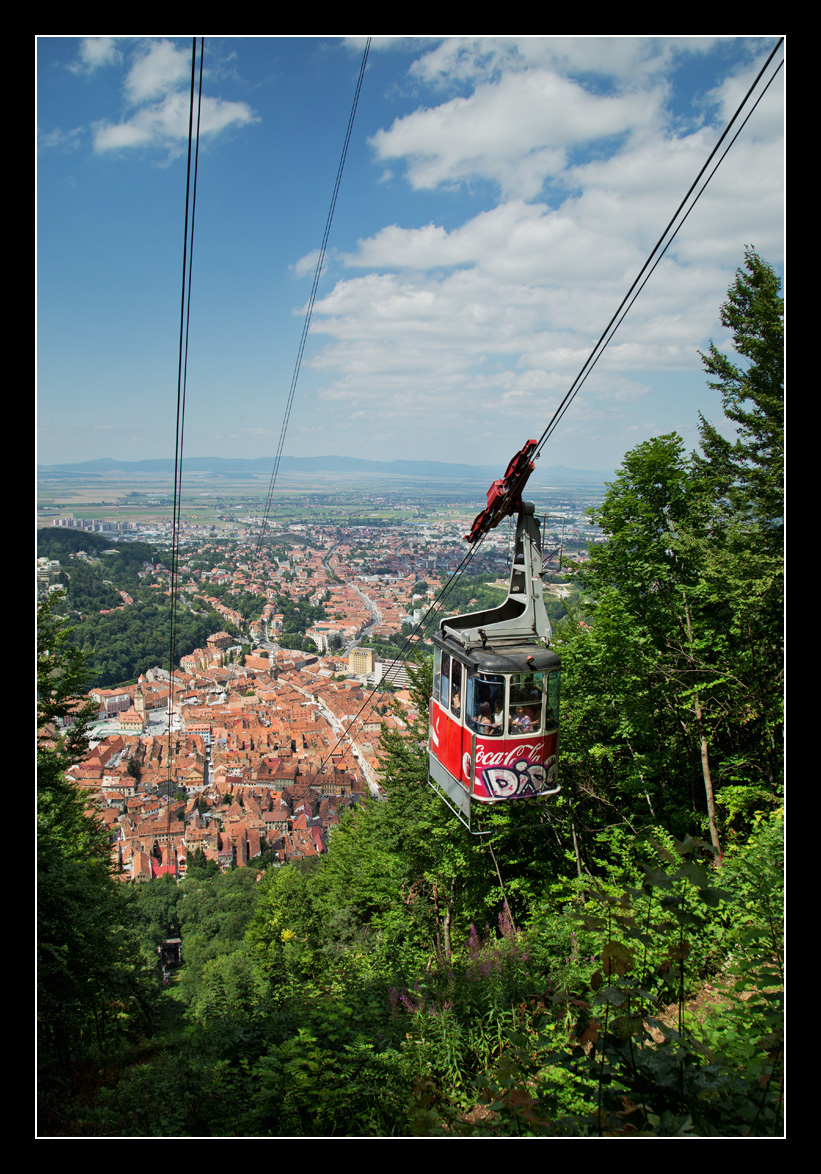 Even walkers can enjoy the ads for the few seconds they see the gondolas from below... 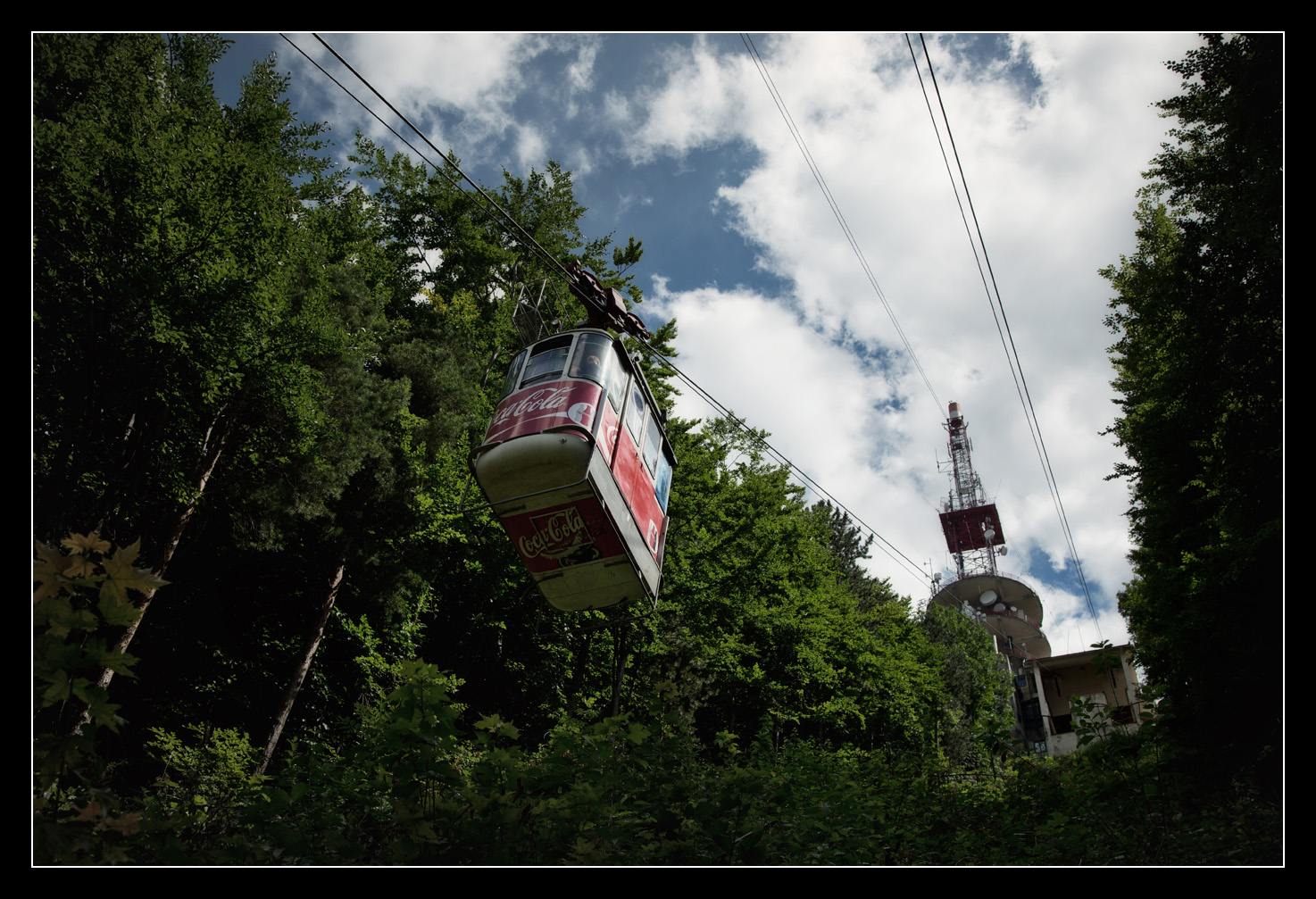 Back in town we were in need of refreshment and shortly sat down in front of the "German" pub "Die Stube". The German Schlager music running on a loop was only hard to bear even in the garden, when suddenly Styrian band STS came on as a change. ;-) 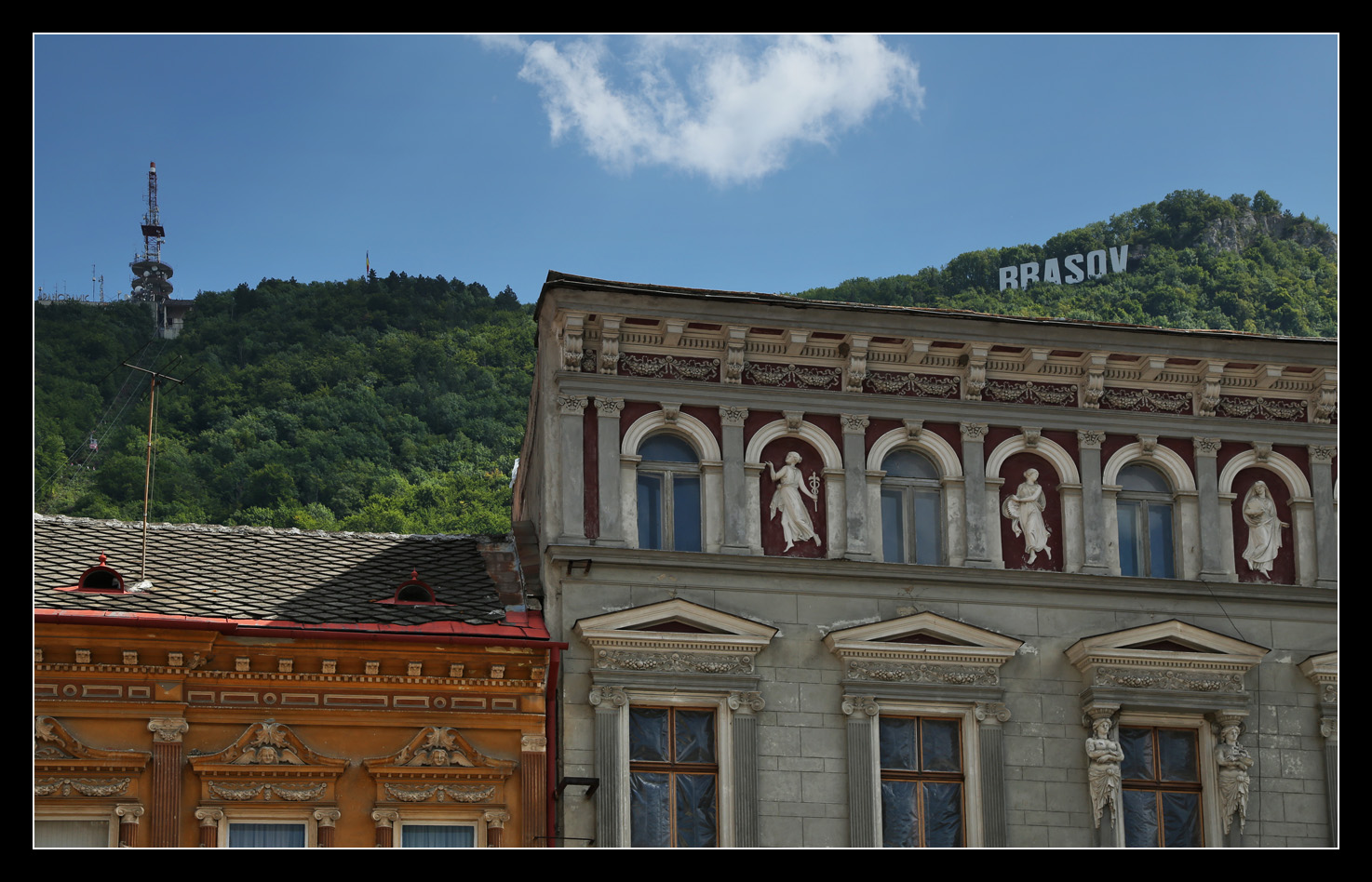 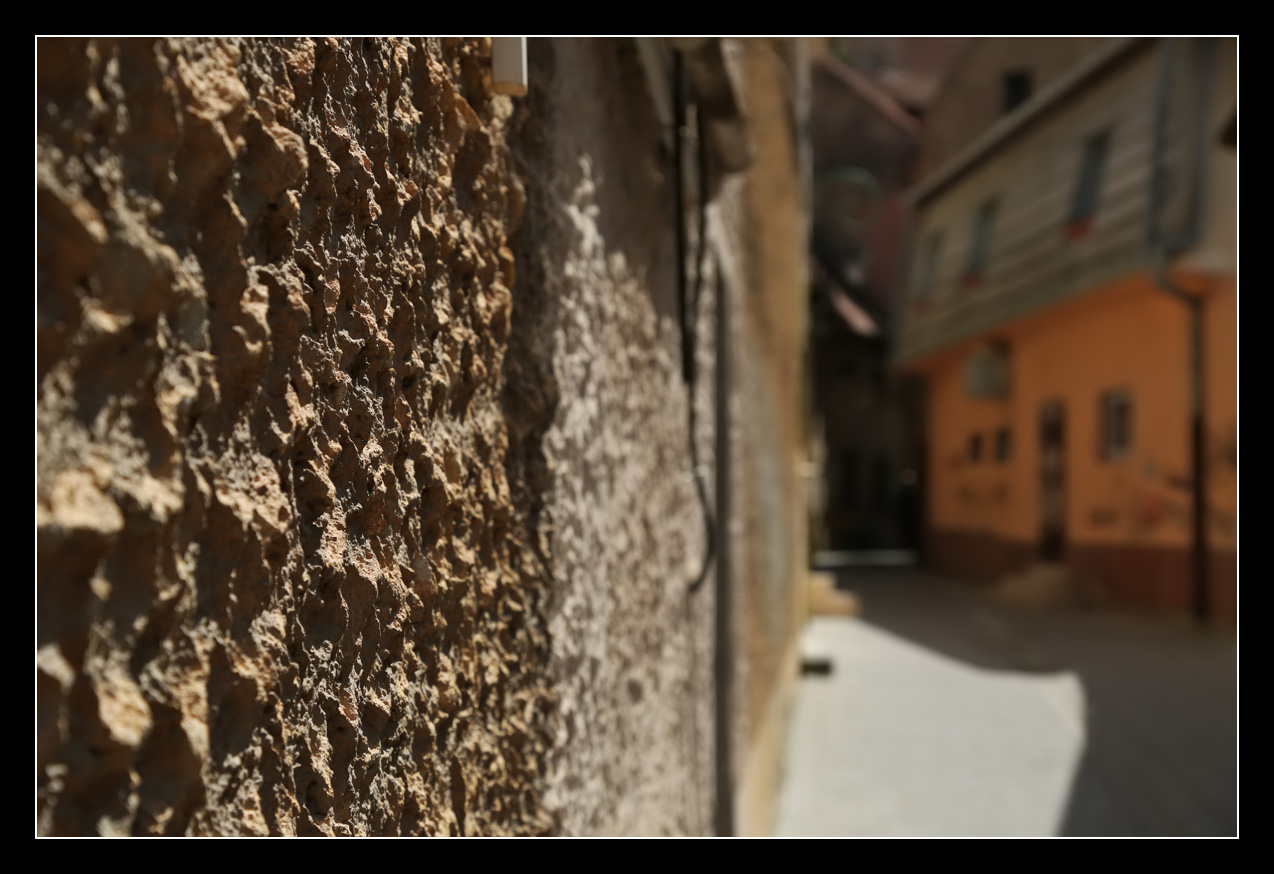 "Casa Hirscher" (or "Hyrser" as proclaimed by the inscription above the entrance) on the main square had been erected 1539-45.

Next we approached the main sightseeing attraction: the Black Church, supposedly the "biggest sacral building between St. Stephen's Cathedral in Vienna and Hagia Sophia in Istanbul" - in any case the most important Gothic church in South-Eastern Europe.
More info about it:
https://en.wikipedia.org/wiki/Biserica_Neagră

Important is the collection of "Transylvanian" rugs decorating the interior - of course actually Oriental rugs, but Brasov and Transylvania in general had been important trading posts between Europe and the Ottoman Empire.
Photography is forbidden inside the church, here a picture: https://de.wikipedia.org/wiki/Datei:Schwarze_Kirche_zu_Kronstadt.jpg
A friend born in Brasov told me later how she always had sat next to the carpets on the choir stalls as a child.

To the right you can see a statue from 1898 on occasion of the 400th birthday of the Transylvanian reformer Johannes Honterus (1498 - 1548), our Romanian guidebook specifically mentioned the theft of one of the plates on the plinth - twice!

Pious hope and an interesting connection to my home city Vienna. 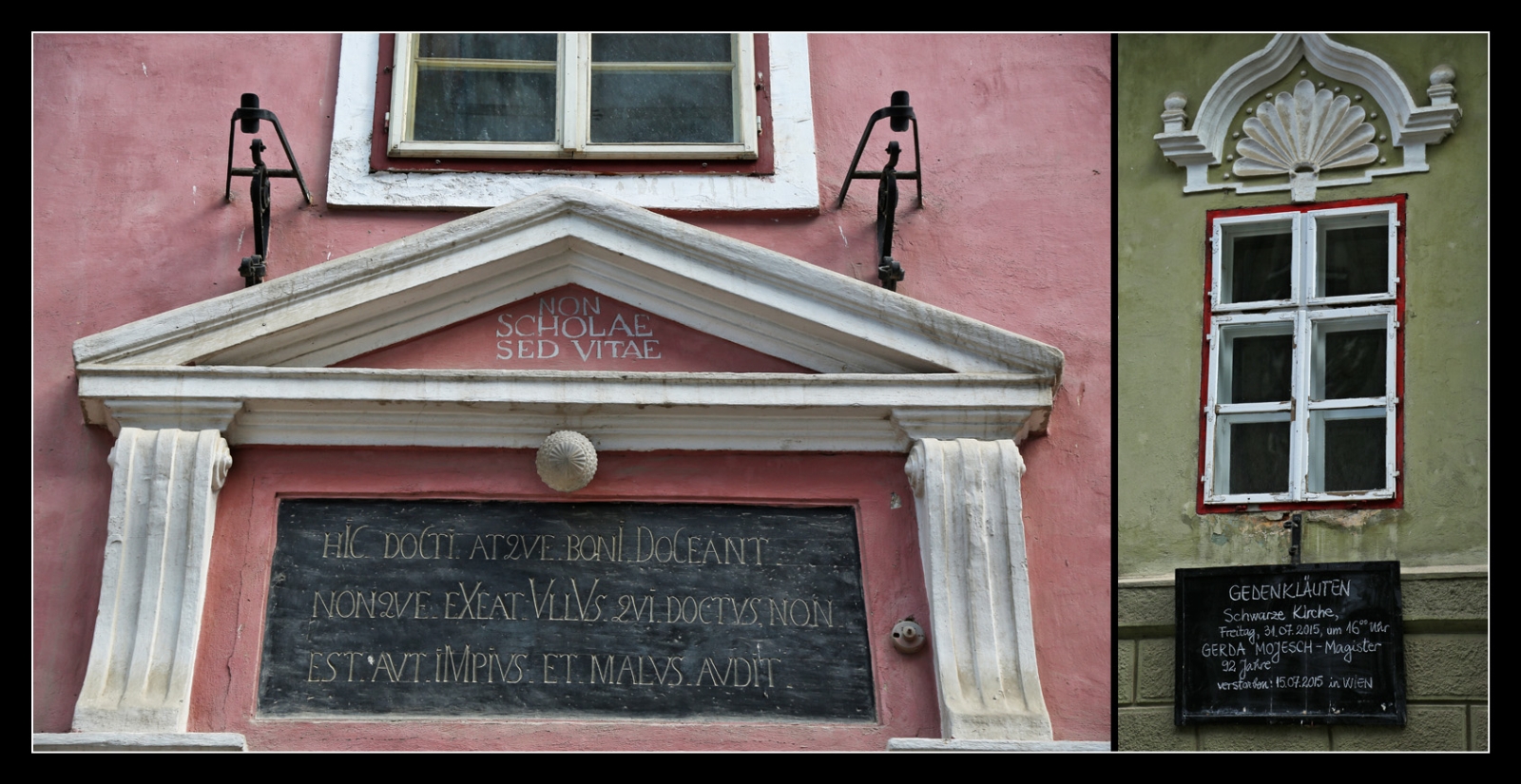 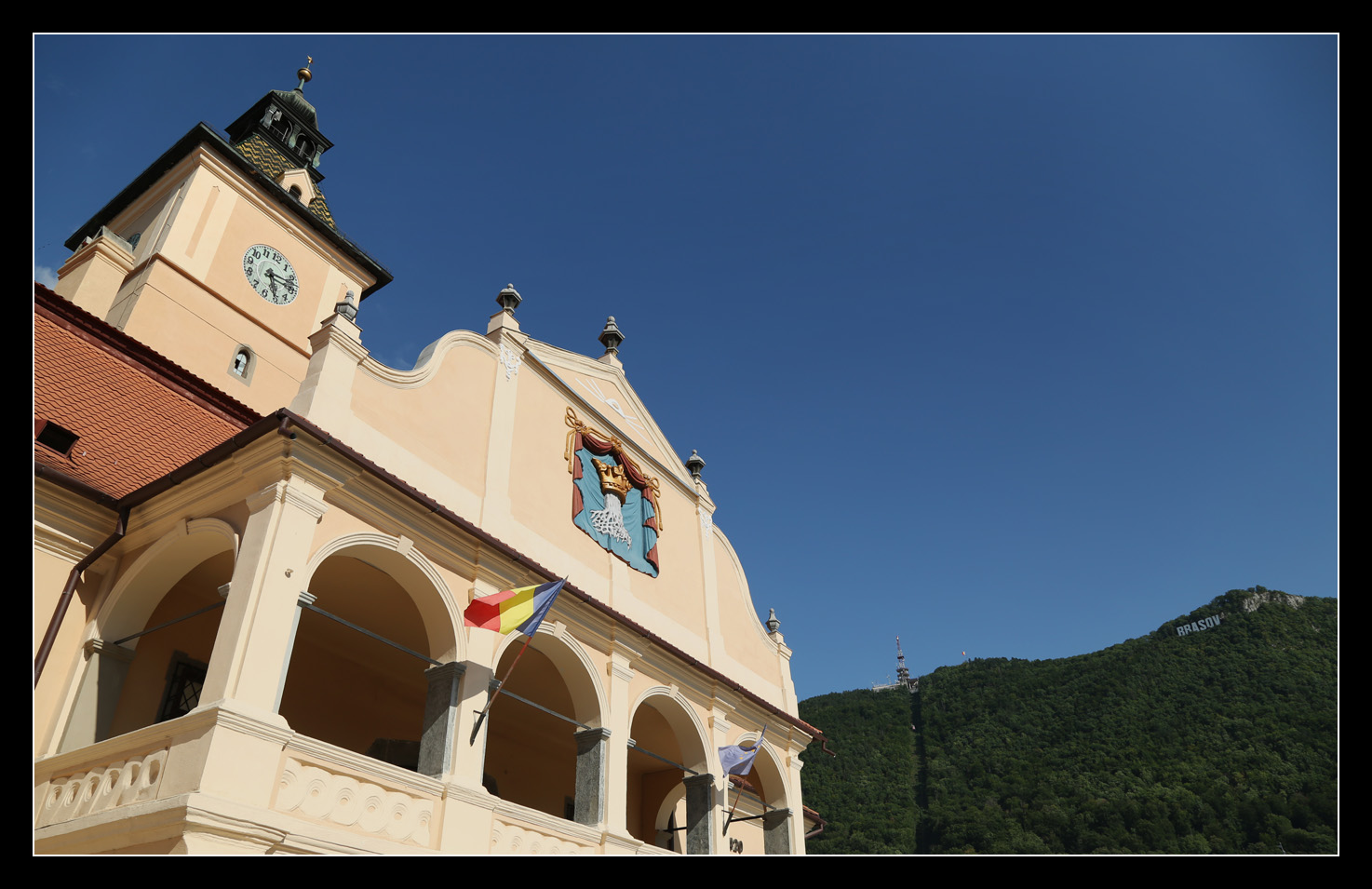 In front of our accommodation. 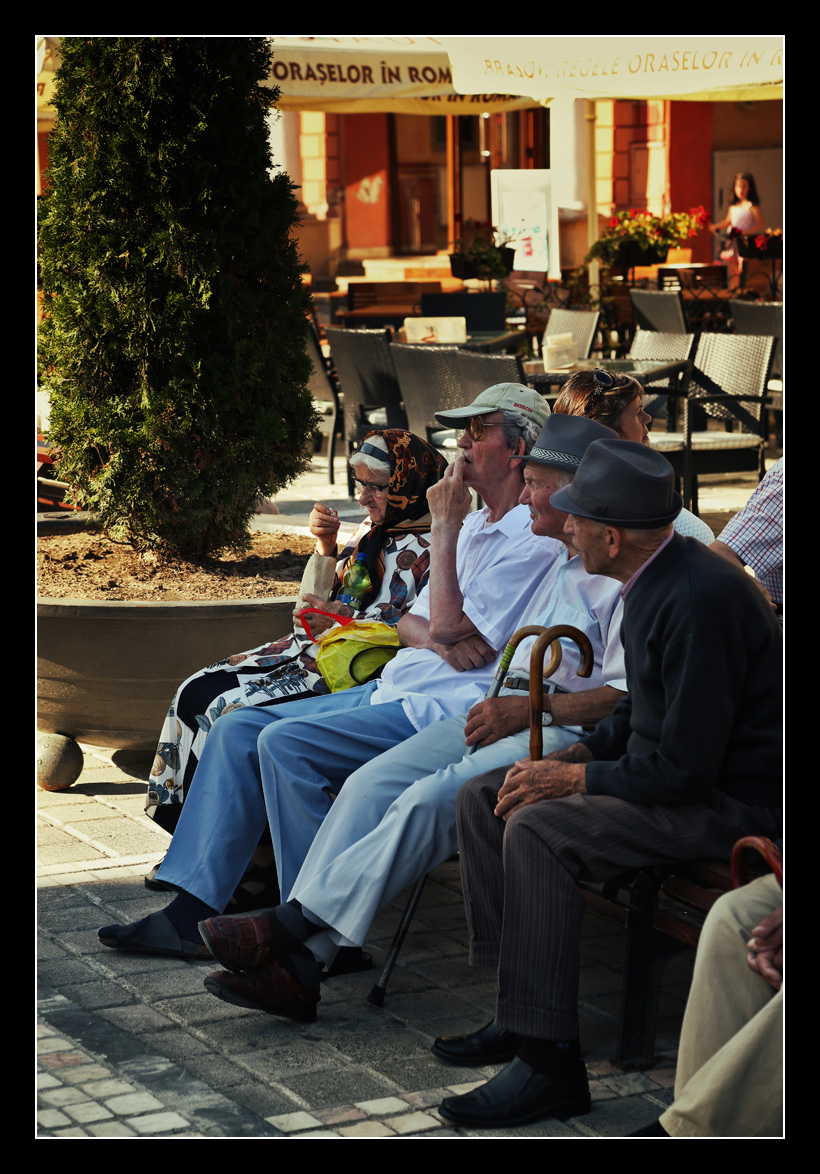 Our first proper dinner of the trip, we sat down on the square in front of Casa Hirscher restaurant. To the right one half of our room at Casa Wagner with historic wood-beamed ceiling. 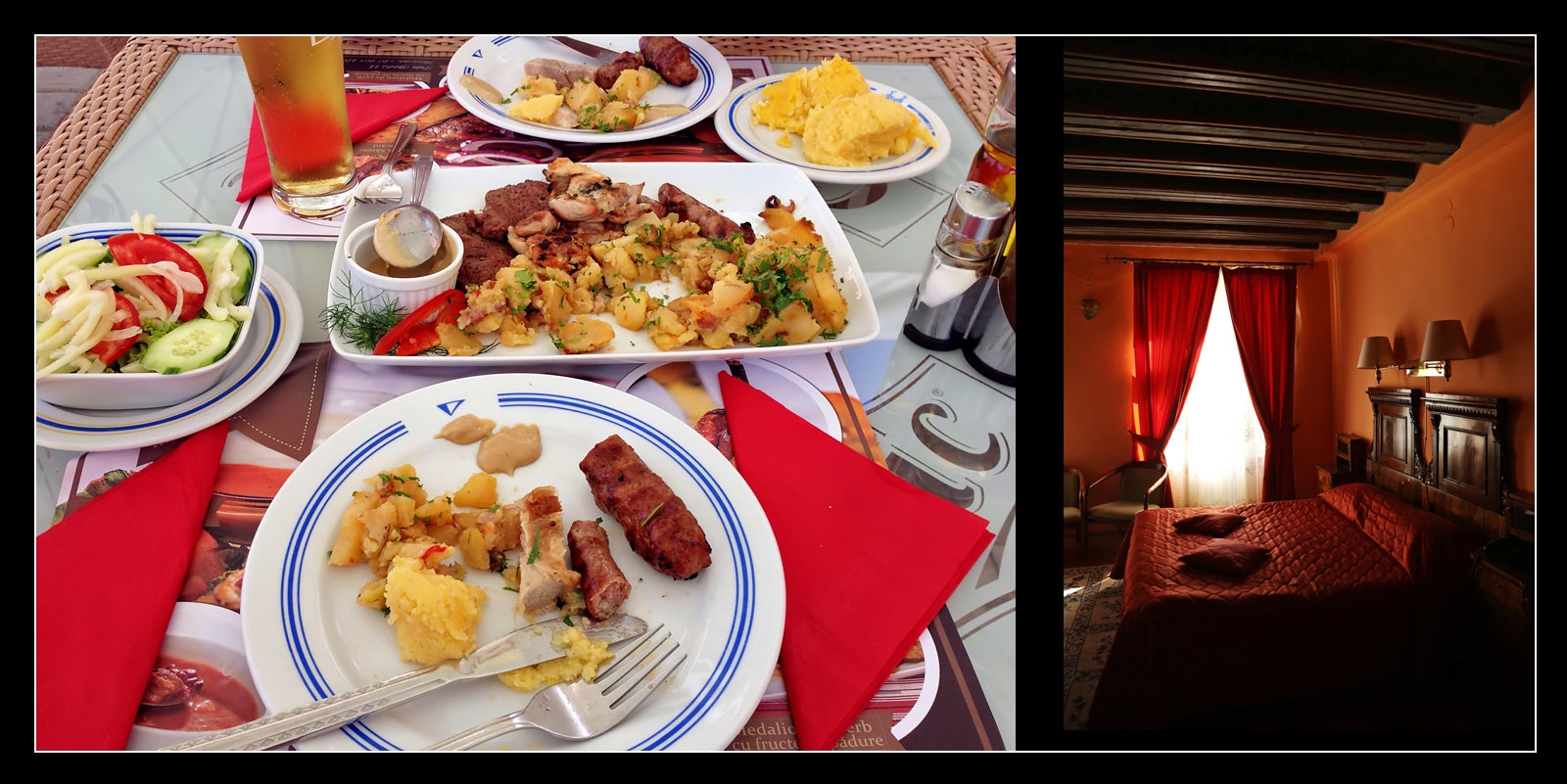 Evening view at the square from our window, later two live-concerts were rivalling each other in bustling evening life.

The first rays of the morning sun illuminated the most important buildings. 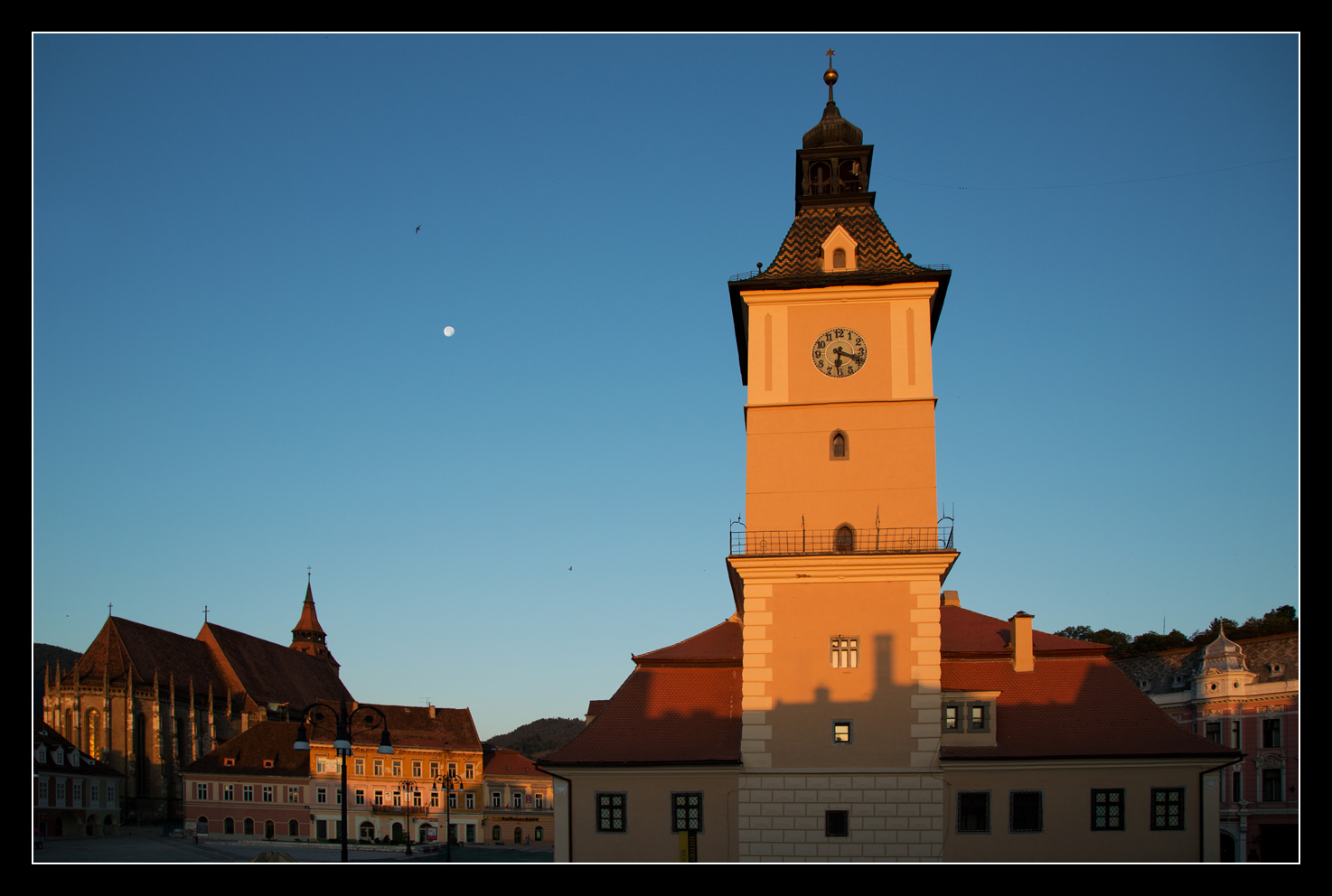 We took a taxi to the station, of course it could not pick us up in the pedestrian zone but at the nearest street corner. Trolleybus lines are running outside station square, I stayed shortly, but none passed by.
Almost twenty minutes delayed long overnight-IR 1934 Satu Mare - Bucharest still was waiting for its departure. 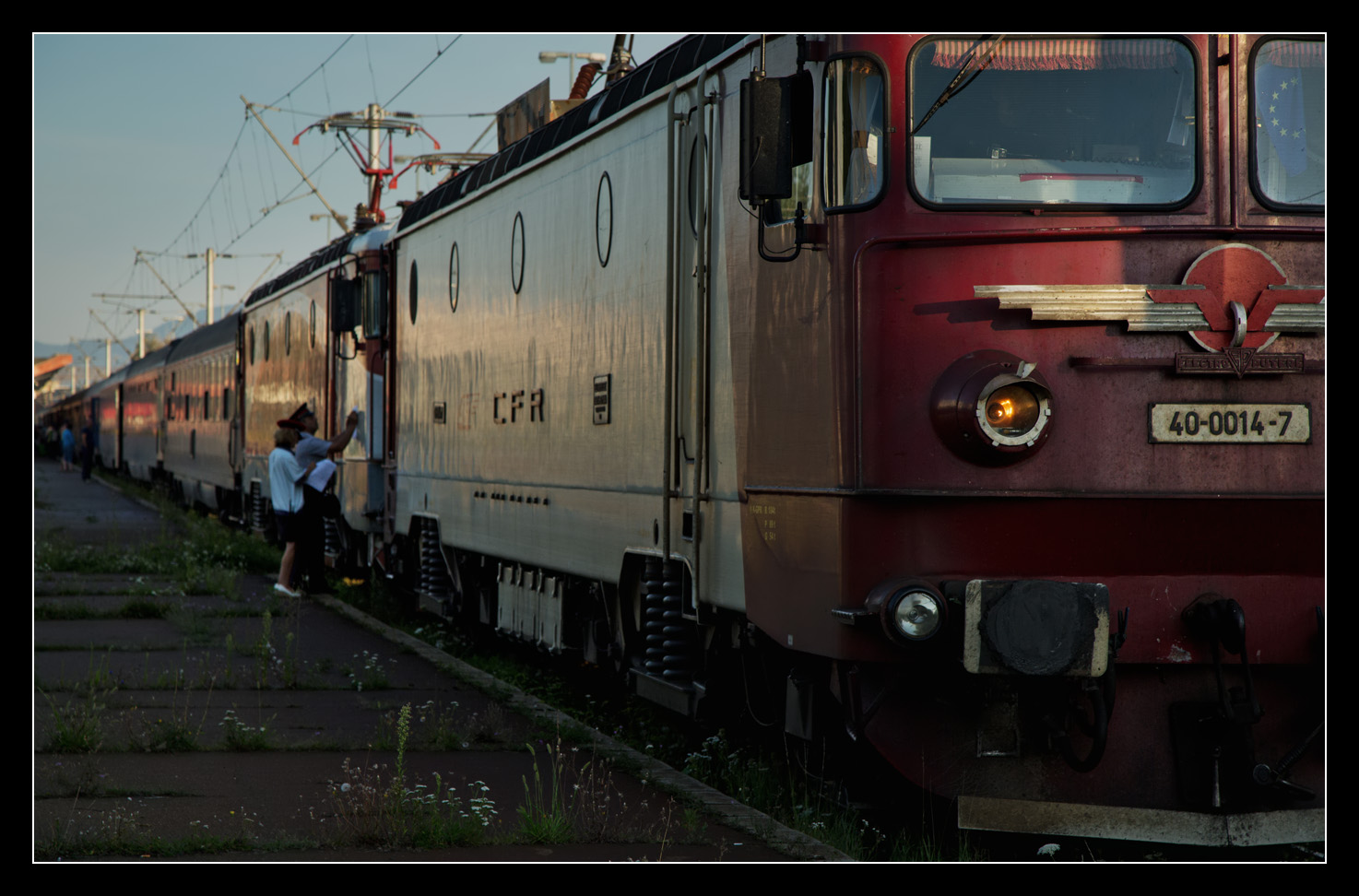 Punctually at 7:14 a.m. local R 3023 from Ploiesti rolled into Brasov station (important to remember in Romanian: the "i" at the end of words behind consonants is not pronounced - this is valid for several cities, above all of course Bucuresti - "Bucuresht", the "t" before the "i" is palatalized). 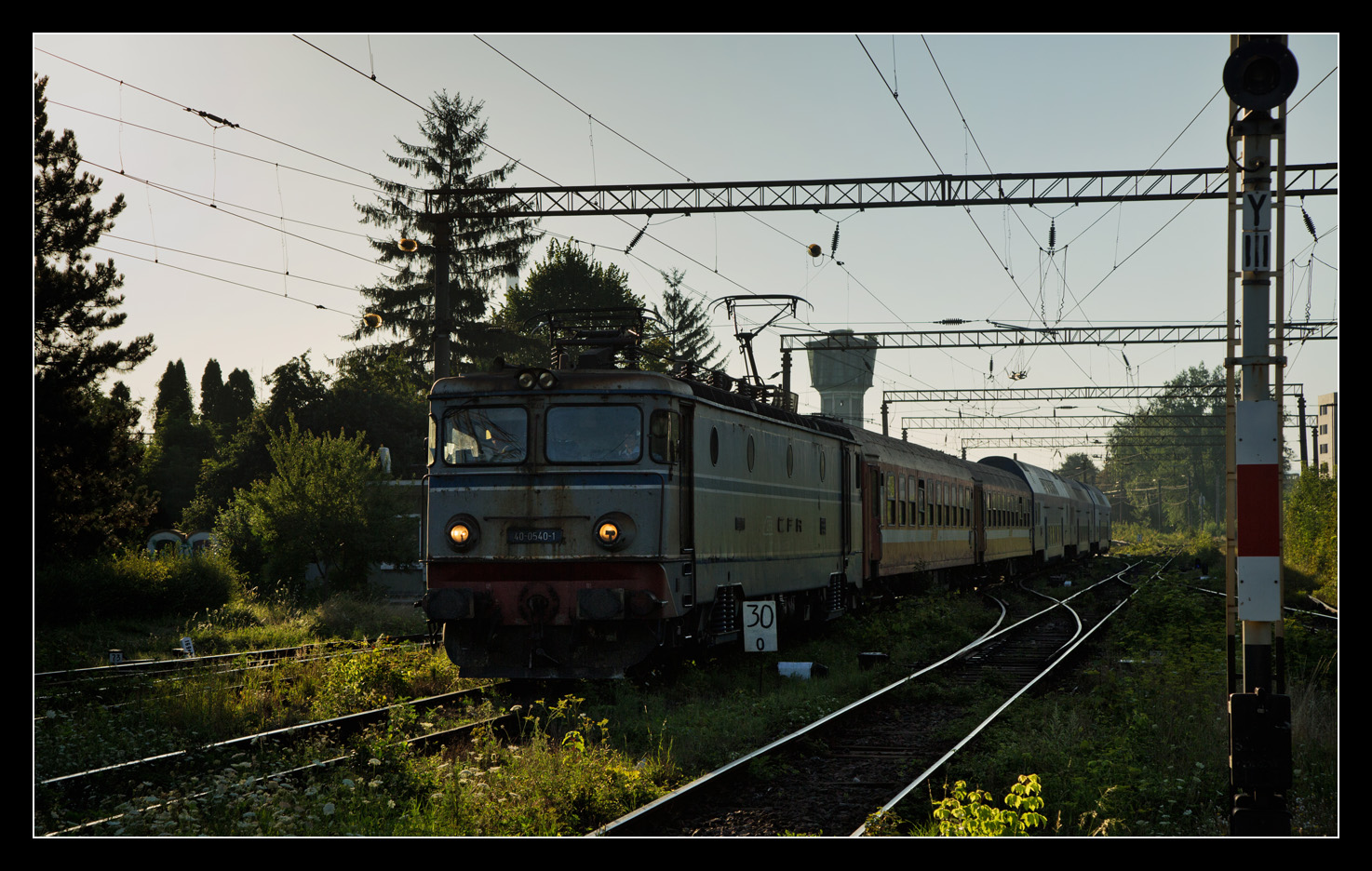 In front of the central signalbox plinthed steamer 150.1114 can be found - we already know two of this class from Cluj und Viseu, however, this is no Romanian-built reconstruction but a proper former German DR class 50 which had reached CFR via the USSR. 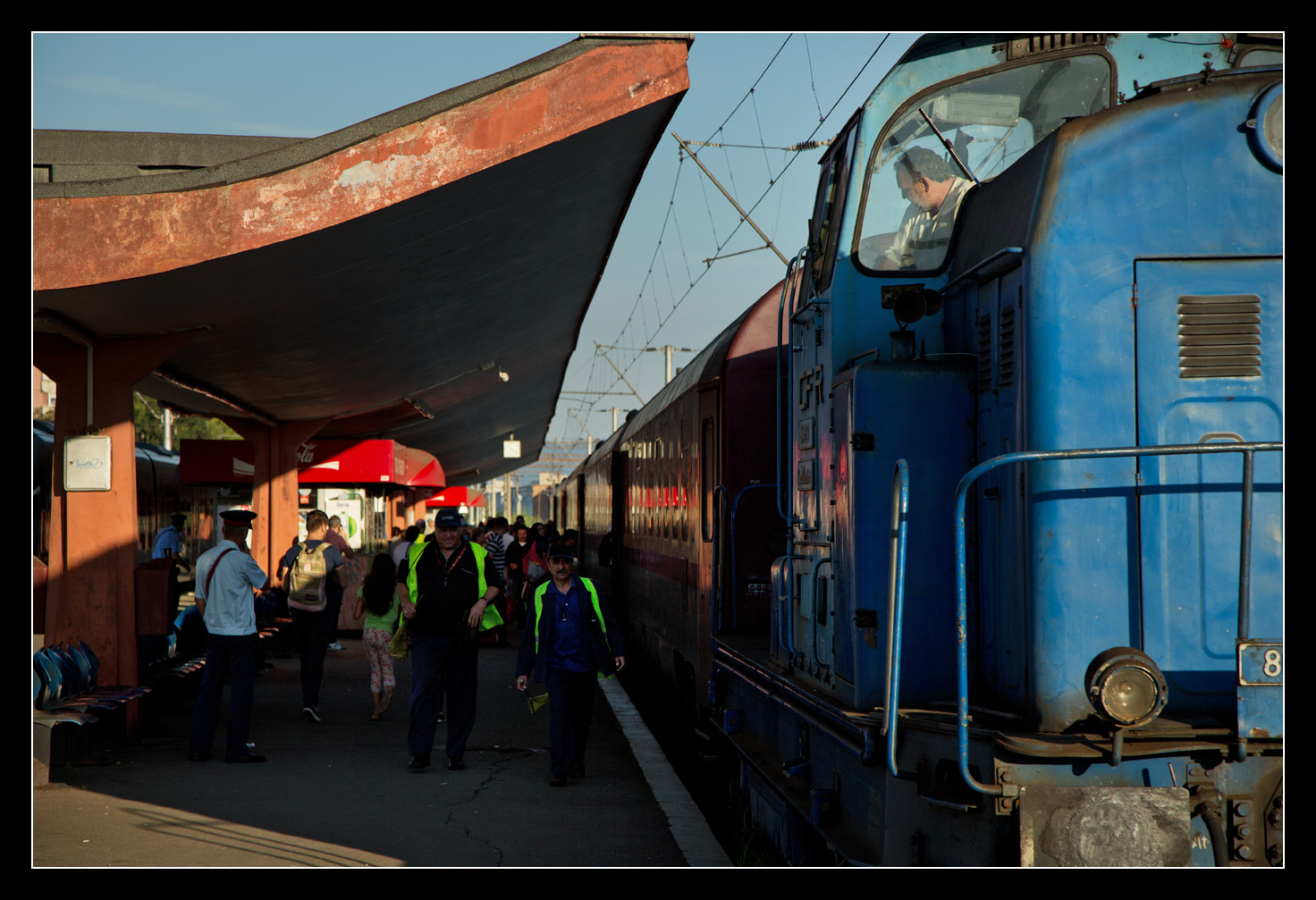 We took our seats booked online in the last coach, providing good opportunity to enjoy the coming mountainous section along the Bucegi Mountains. At first the line passes through dense vegetation.
More about the history of this railway can be found here (in German): https://de.wikipedia.org/wiki/Bahnstrecke_Ploiești–Brașov 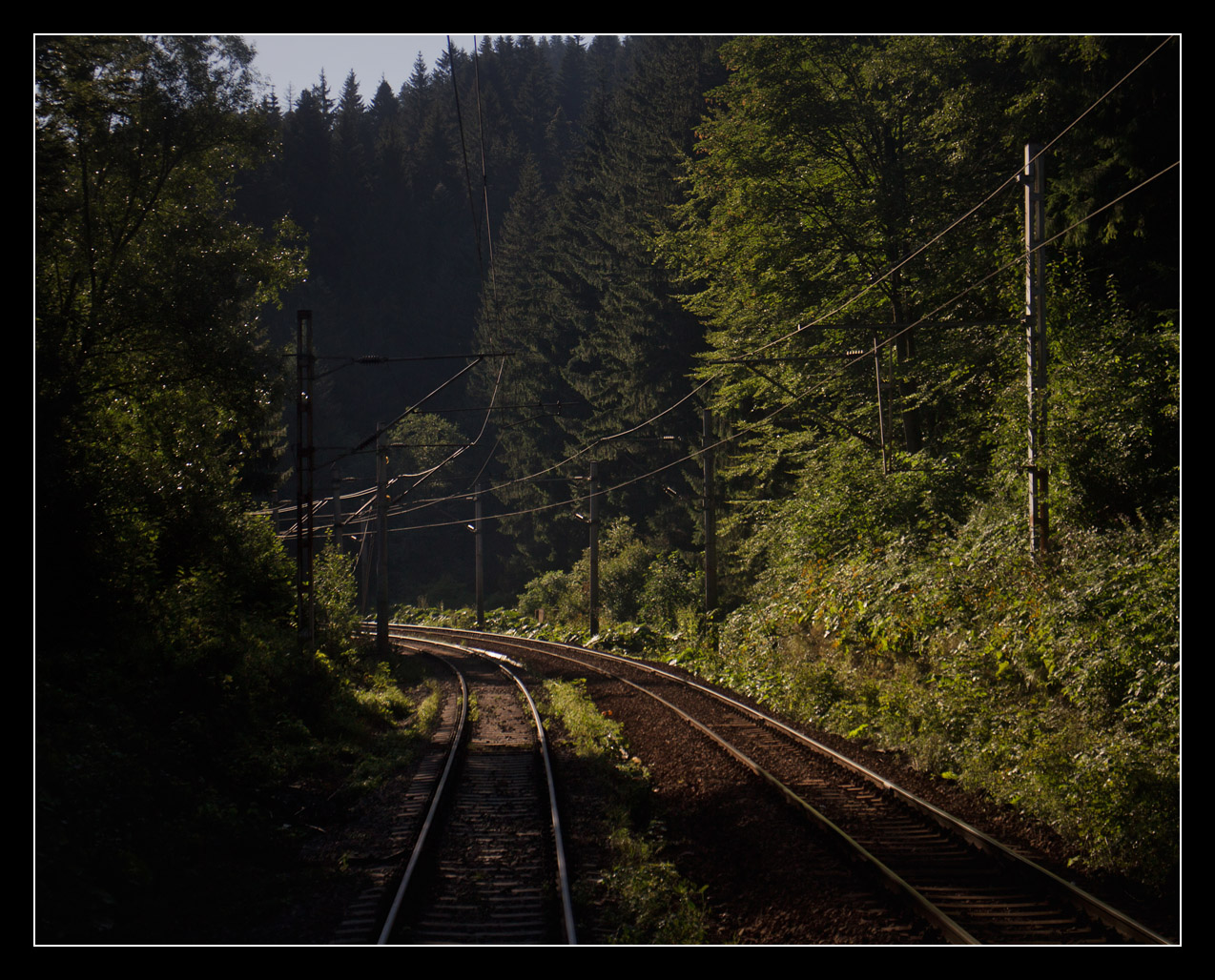 At Predeal we had left Transylvania and crossed the former border Hungary - Romania. The highest point of the line at 3458 ft altitude is marked by triangle shaped architecture reminiscent of mountain peaks as it can be found elsewhere in the former Eastern Bloc states and Yugoslavia. 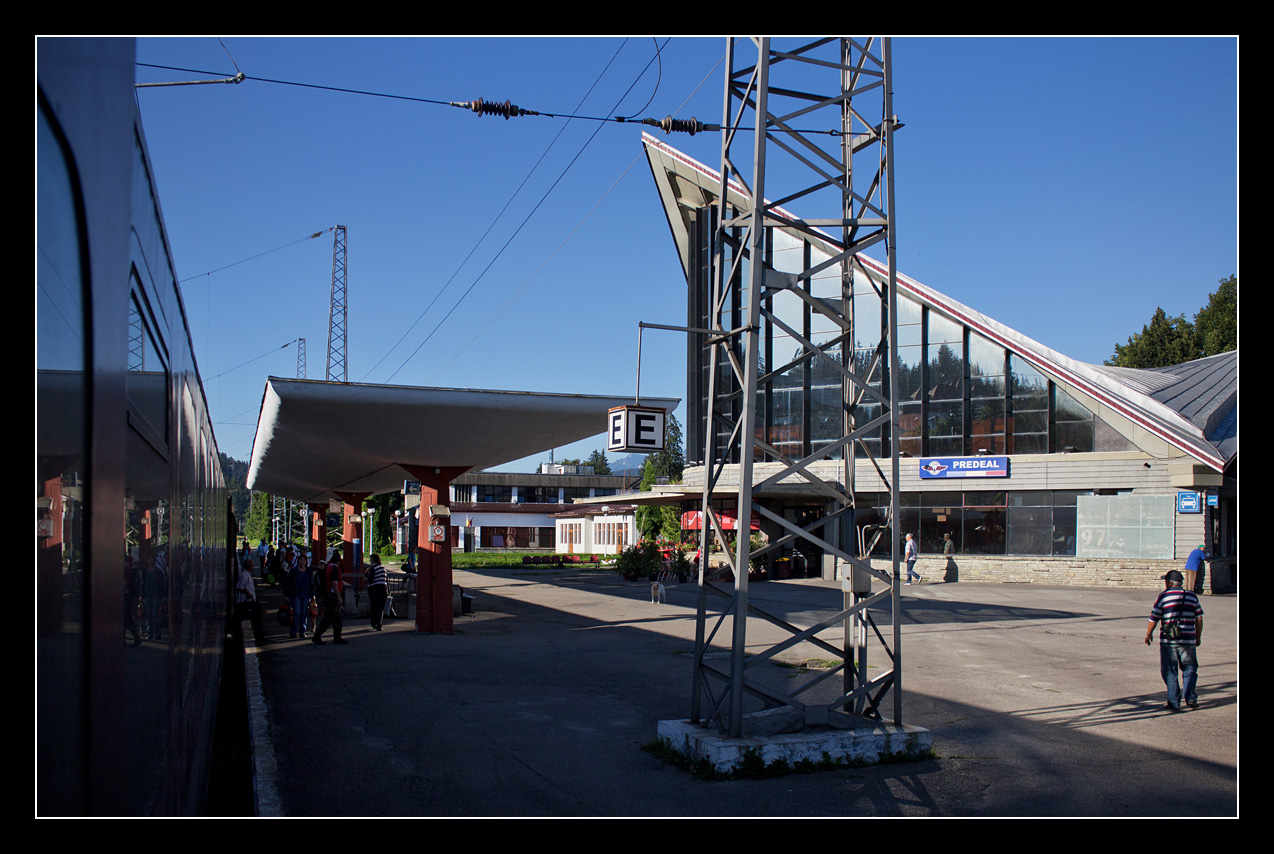 I used the compact digicam to take pictures out of the rear window, at Predeal we overtook a GFR-freight train. Also, we met a few on the line, for more impressions of the ride see video from minute 6:37. 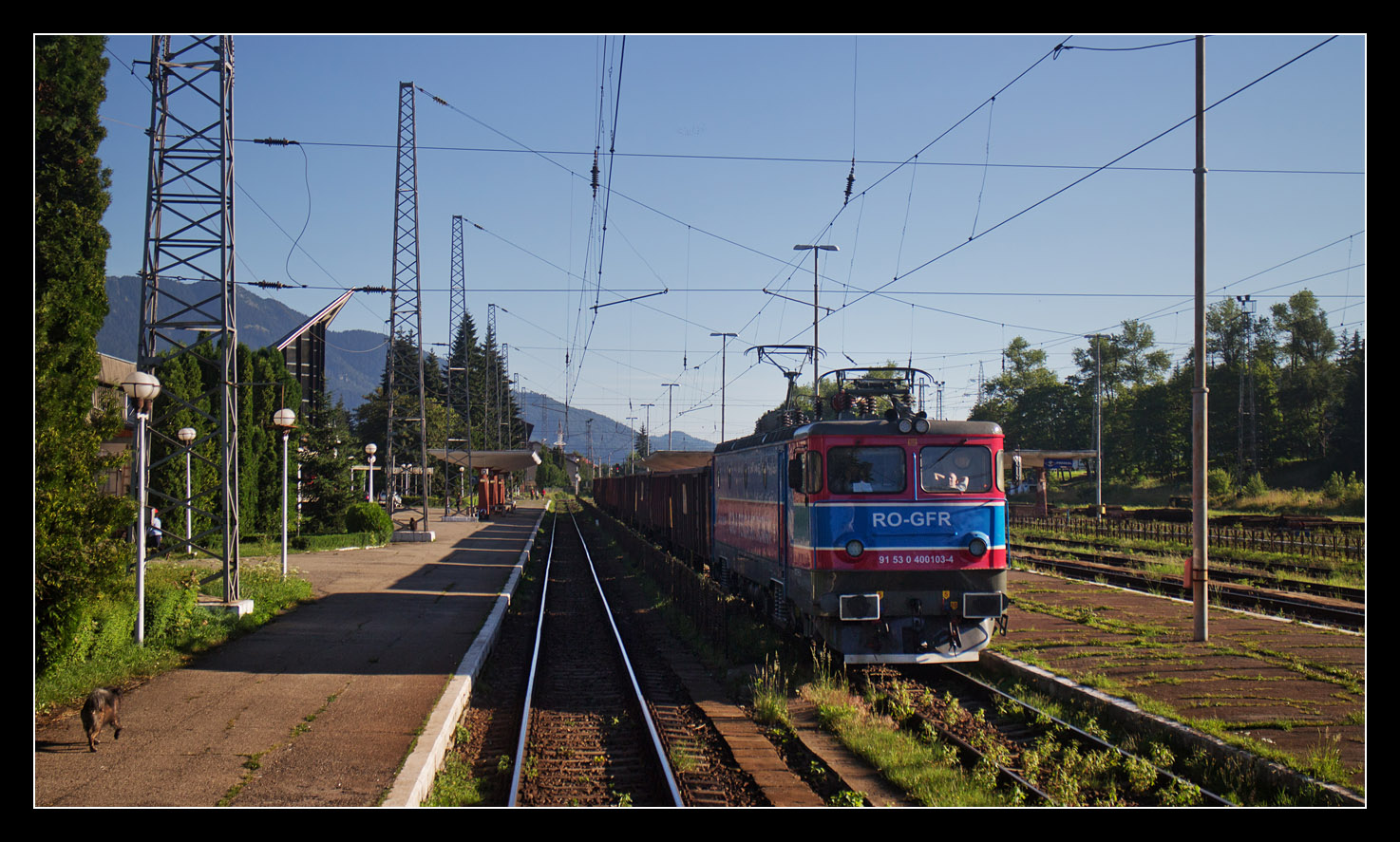 From here we followed Prahova Valley along the modernized line through a quick succession of well-known places. A seller wielding a basket full of wild berries joined the train at Azuga, but with moderate success. At Busteni we passed the tallest summits of the Bucegi Mountains, reachable by cable car. 101 ft high monumental Crucea Eroilor had been erected at 7821 ft on Caraiman Peak.

From Ploiesti to Bucharest we dashed across the Wallachian Plain and reached terminal Bucharest Nord on time. Entering the station we passed a Softronic "Phoenix" class electric in blue-yellow-red livery which was about to take over our train to Constanta - you can spot the red front in the background. Exactly at this moment a wonderful TFC composition departed, consisting of two three-part ex-DB class 624 DMUs. The social circumstances of the big city immediately became clear as several people were sleeping on benches in the vicinity.

We skipped the capital Bucharest for this trip and continued towards the Black Sea. Several vacationers got on the train, one man was delighted when I showed him that suitcases also fitted between the backs of the seats. Apart from a short operational halt along the line we sped nonstop to Fetesti (What did we say earlier? No "i"! ;-)) on the Danube River. To take pictures I walked to the door area where I met a lady and a younger guy smoking with relish - upon which I gave them an earful. They even got rid of cigarette stubs by opening the connecting door of the wagon leading to the locomotive - shortly afterwards a mother with child walked by to the toilet. With Bulgarian BDZ I noticed that they prevented this idiocy from happening by binding the door handles together.
The Danube forks into two branches on this section, here the Borcea Arm.

Soon afterwards the main arm is crossed, two tracks on a combined road-rail-bridge, one track - which just was under maintenance - on a much more decorative example. We reached Cernavoda and traversed the Danube–Black Sea Canal on another huge bridge. Across and between the rivers the train was chugging along slowly, the rest of the distance Bucharest - Constanta is covered at fast, Central European rail speeds. We dashed through Medgidia, at least I managed to capture a cutter with freight on video (from minute 9:19).

After a little more waiting entering the station we finally arrived at Constanta ("Constanza") 20 minutes delayed. On site I encountered an interesting potpourri of vehicles: To the left Softronic "Hyperion" dual-system EMU, commuting daily for the constructor-owned operator Softrans between its factory hometown Craiova and Constanta, in the middle our loco Softronic "Phoenix" 473 004 - reconstructed from 40-2004 - was shunting und to the right we can see a Regio Trans ex-SNCF RIO rake. Once again life was made easier for me by an iPhone-panorama.

A GM-diesel waiting to continue on the unelectrified coastal line to Mangalia was reflected in the windows of the "Hyperion". 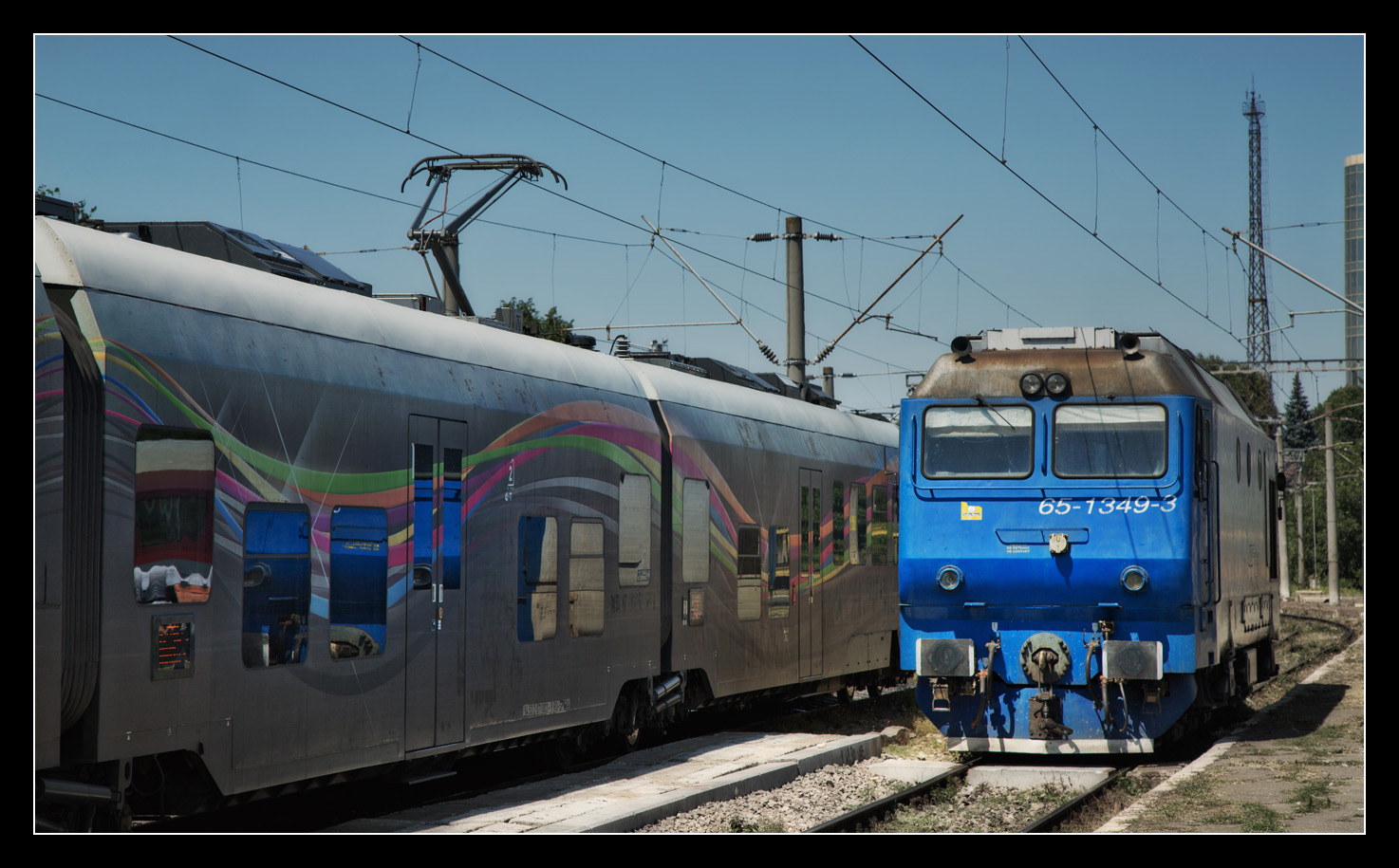 This junction for holidaymakers was bustling even during midday heat, some had planned ahead. 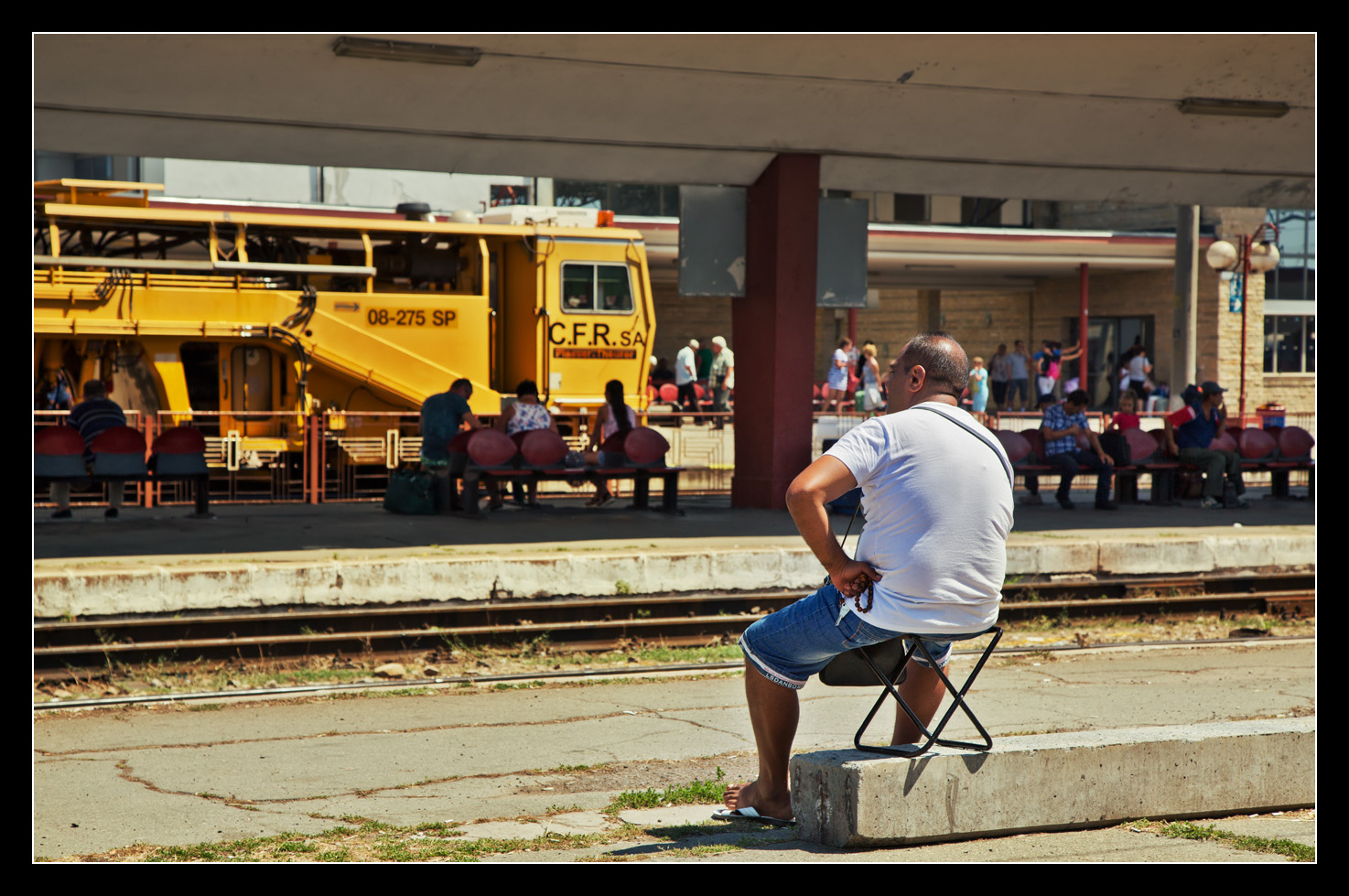 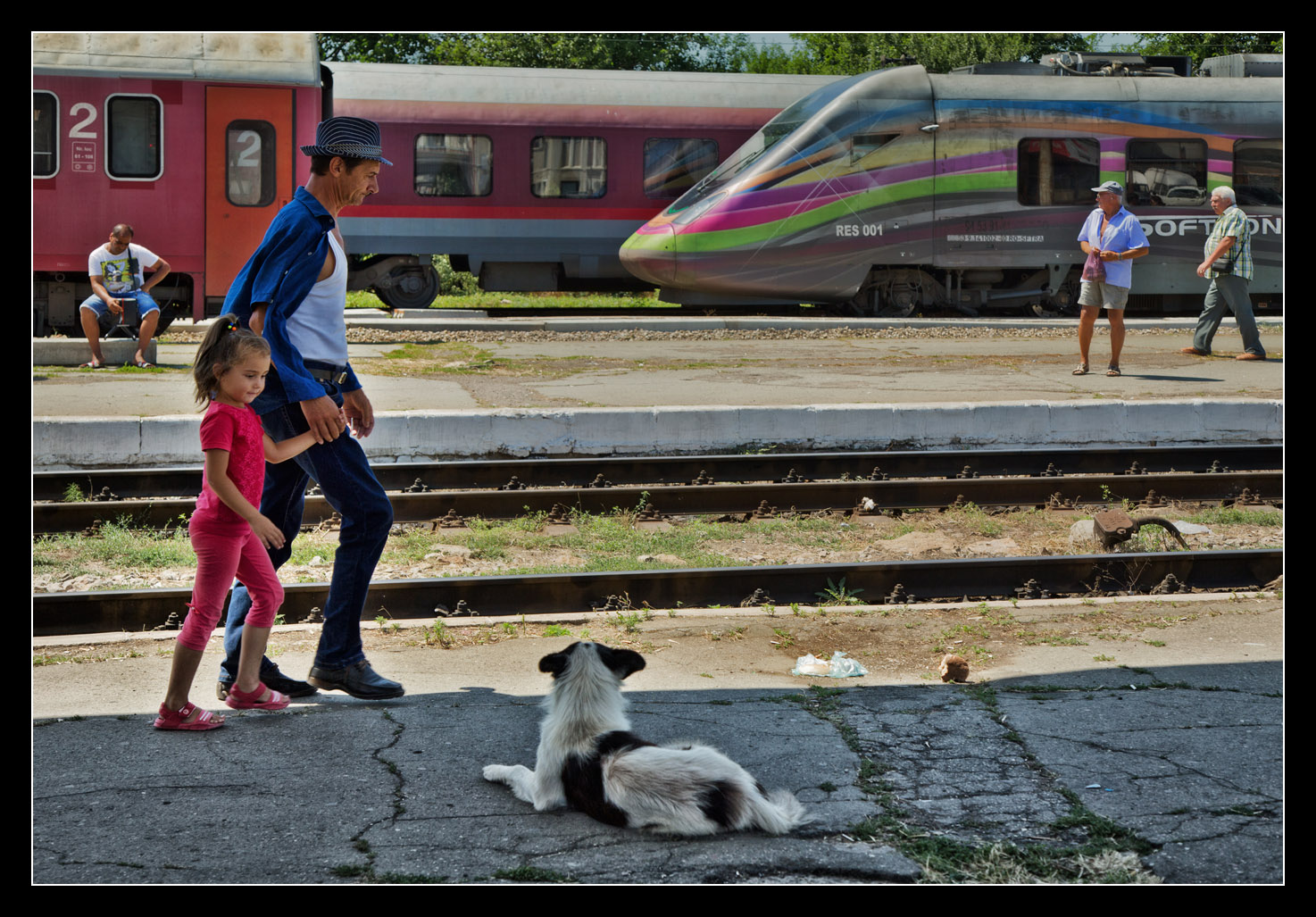 Original cutters and maintenance trains were encountered as well. 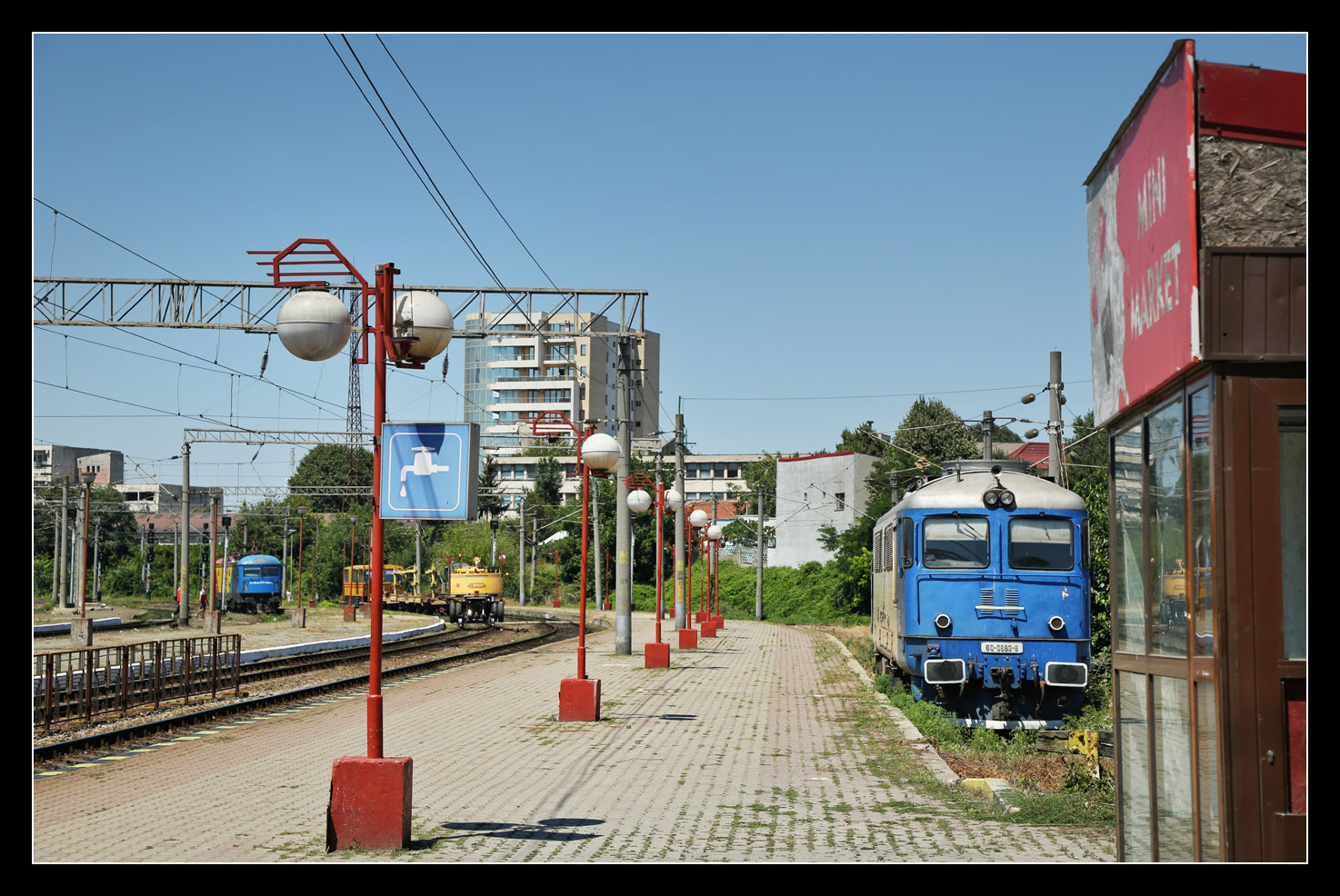 We deposited our luggage at a friendly manned counter, then threw ourselves into the already slightly Balkan-like hustle of the station square. 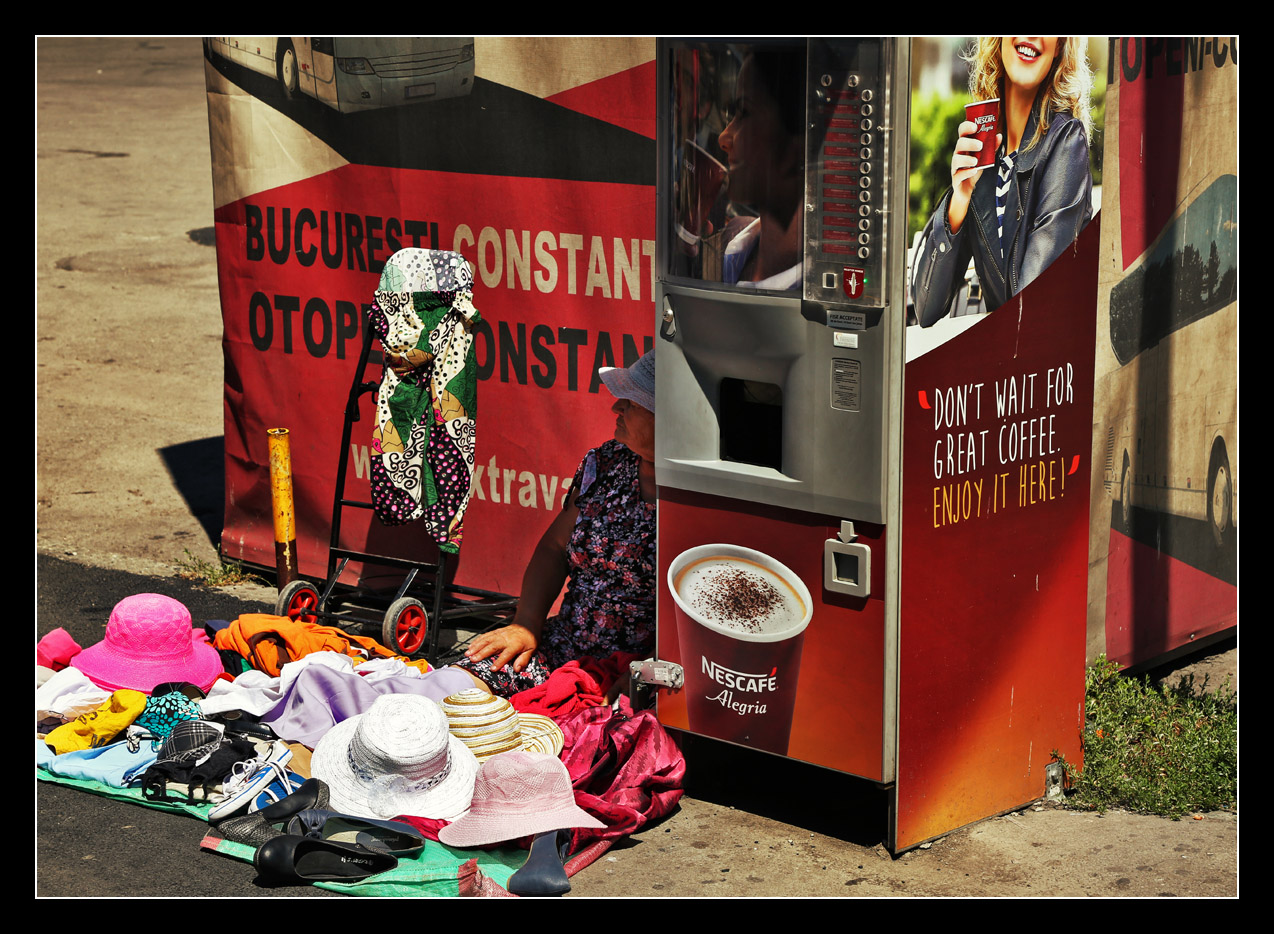 We took a bus to the old town leaving from a stop across the street at the start of Bulevardul Ferdinand. For example line 2-43 towards Tomis Nord passes the centre. Until 2008 Constanta featured a tram network only introduced in 1984, also trolleybusses, nowadays everything has been reduced to ordinary bus traffic.
The ancient Greek city of Tomis was located within modern city limits, we got off at the town hall park (stop "Fantasio") also featuring an archaeological exhibit. The name Constanta is derived from Constantiana, according to some sources a fort in the vicinity erected by emperor Constantine – whom we will meet more often on this journey - and named after his sister.
History of Constanta: https://en.wikipedia.org/wiki/Constanța Dilapidated and modern city, the largest port on the Black Sea.

Constanta is wedded to one name - so popular in Romania it is given to many children - P. Ovidius Naso, who had been banned to this remote corner of the Roman Empire by Emperor Augustus. His monument is located on Piata Ovidiu in front of the Archaeological Museum featuring many different architectural styles.
The location shows several periods of history, behind Ovid the Carol I-Mosque (Marea Mosque) can be seen. 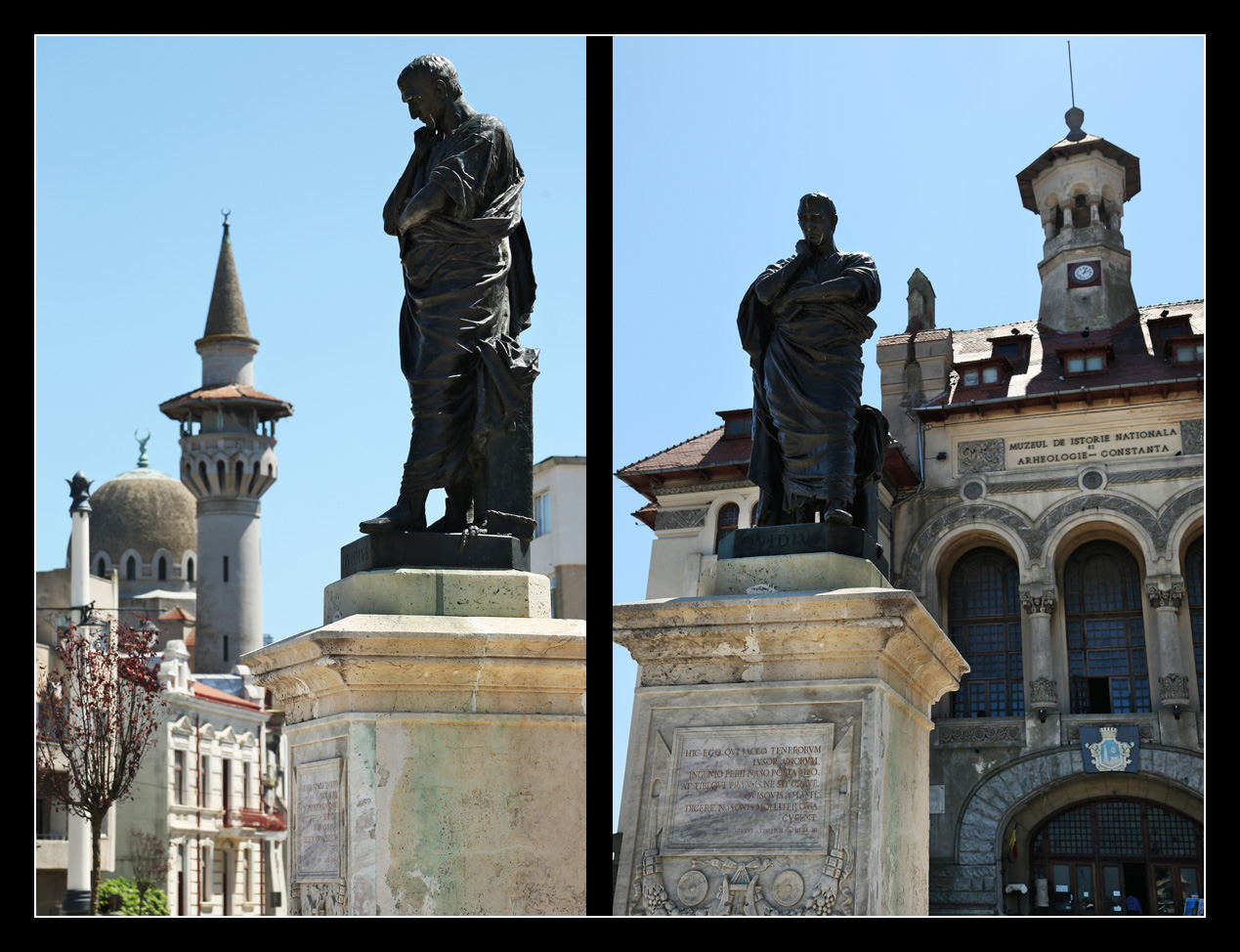 After two days of travel finally by the sea!

A visit on top of the minaret of Marea Mosque built 1910-12 under King of Romania Charles I is recommended as it features a 360°-view across the old city peninsula of Constanta. To the lower right corner you can spot Romania's most prominent beach resort - Mamaia.

DB-Schenker-wagons shone through from the harbour. A 4th century Roman villa including a 20000 square feet mosaic floor is open to the public on the hillside facing the port, the supervising ladies definitely were happy about our touristic visit.

Constanta is a centre of the Turko-Tartarian minority in Romania, 6% of the population are of Muslim faith. At the tip of the peninsula we encountered the most prominent sight of the city, the casino erected in 1910. The building is not in good condition and currently not used, although it is supposed to get renovated. The statue of Romanian Queen Elisabeth – contemporary of Austrian Empress Elisabeth - looks out onto the sea, also poet (under nom-de-plume "Carmen Sylva") and socially active she is revered by many. At the end of the promenade we passed the Romanian navy headquarters.

We turned back into the city after procuring refreshments at a supermarket. Most hotels here had seen better times, most of the mass tourism life is bustling at the resorts around Constanta. And the activity around newly introduced pedestrian zone Bulevardul Tomis even enticed cats out from under cars in the afternoon heat.

At 4 p.m. we returned to the station and bought fruits at a stall.

At 4:15 p.m. Softrans "Hyperion" departed as train 15981 to Craiova. And where was the old RIO-rake going to in this heat? Well, all the way we had covered conveniently in an AC-cooled-car in the morning: as Regio Trans train 14039 to Brasov!

Next time we will visit the beach and coastal diesel line!