HELP! Need info on switching in the US in the 40s

I'm a screenwriter working on a spec script. At one point in my story, someone finds an old train in a tunnel and gets it going. However, due to damage in the cab, the train's throttle gets stuck and it can't slow down. The spur track the train is on eventually meets up with the main line going into town.

But... there will be a SWITCH to make this transition. I'm wondering: can anyone tell me how switching occurred in the 1940s in the USA? Was it automated at all, or did a human have to crank it into position?

Now, here's a follow-up question: is it possible for a train to "run through" a switch without jumping the track? If it's going fast enough, and it's heavy enough, could it just "force" the switch-over to the other track?

Any help that anyone can provide would be most appreciated. Thanks in advance!

Yes, a locomotive could force its way through a trailing-point switch. That is where two tracks merge through a switch. It could seriously damage the switch, but it has happened in the past. Modern railroads have what are called Derails on many sidings and spurs to prevent this from happening, though they weren't as common during the time your story will be in.

Though you didn't ask, it would be more plausible for a diesel-engined locomotive to suffer this kind of failure, a steam-powered one needs to have a considerable amount of attention to remain in motion, where a diesel can be started, placed in motion, and remain in motion without a great deal of attention.
B

Getting a steam locomotive ready to run, starting cold and in a tunnel, wouldn't be much fun. But in the 40's, an old train wouldn't likely be a diesel. Maybe a mine train with a little 4-wheel industrial diesel, gas, or kerosene locomotive and a string of little coal or ore cars.

Bruce and Terry, thanks so much for your replies.

In my story, the locomotive is from the Civil War, and discovered in the 1940s. I've done some research on older steam engines, since I don't want things to happen just for the sake of the plot. But there's a chase, and it all hinges on how easy it is to get the train from an unused spur to the main line. That's where the switch comes in.

So I'm going to go ahead and make the case that the locomotive could force its way through the switch. When the press is grilling me on the impossibility of it happening, I'll refer them to you guys!

Here's another question: how long would it take to get a cold steam engine fired up and ready to roll? Assuming the coal car is full and ready to be loaded in, and the boiler is filled with water.

2 to 3 hours maybe more. Assuming no leaks on a small to medium size locomotive. You would have to have enough flammable material, I.E. wood or Kerosene to start the coal burning. If the throttle was stuck open and if there wasn't a fountain valve or some way to isolate the boiler then all the steam would just go out as it was made and you wouldn't build any steam pressure. If there was a fountain valve and if the throttle was stuck, you could just shut if off and you wouldn't have a run away. Not to mention lubrication of bearings that have not been moved for 80 years, the wheels could be rusted to the track. I think you should just write the story, make the movie, a couple million dollars and ignore the railfans who are just going to sit around with a cup of coffee at the local club meeting and say "obviously the screen writer has never run a steam locomotive". And you would probably be asphyxiated by the fumes in the smoke filled tunnel for 3 hours. But yes it could through a switch.
D

Tom, your reply put a smile on my face. I've been frustrated with trying to reach my story goal, but you and the others have made me realize that I have to make it *just* realistic enough.

Okay... time to roll up my sleeves and get back to work. Thanks!
B

DonChalant said:
Tom, your reply put a smile on my face. I've been frustrated with trying to reach my story goal, but you and the others have made me realize that I have to make it *just* realistic enough.

Okay... time to roll up my sleeves and get back to work. Thanks!
Click to expand...

Sometimes you have to suspend your belief in reality and go with it.
Old steam locomotives were occasionally used as stationary boilers. You could possibly use that as a way to have it already full of steam and fuel. Of course, then it wouldn’t be lost or abandoned....
Also, many civil war era engines used wood as fuel, rather than coal.

Restoration to running condition of old steam locomotives that have sat in parks for decades can take months, if not years.
I agree with Tom. Write the story, make your $$$$$$, and cry all the way to the bank when railfans critique it.

In the 1960's in the Harmon shops of the NY Central, which is located along the Hudson River in NY about 25 miles North of the city they were using what the engineers called "rubber switches". They were designed to allow an engine and cars to pass through without damage. Springs in the switch mechanism would allow the switch to be forced by the passing cars or engine, but it would spring back into it's set position after the engine and cars passed through it. This significantly reduced the time needed to manually operate each switch as an engine and cars needed to move from track to track within the yard. It also reduced the switch maintenance in the yard. I never got to see exactly how these switches were set up for this, but it sure did save a lot of time. Not certain how long these were in place as I was not there very long.

what is the movie called you made or are making?
W 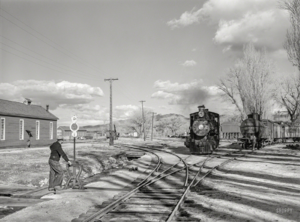