On Friday Feb 14 BNSF Lake Yard (Portland, Or) to Thornton Yard (Surrey, BC) had Norfolk Southern Heritage painted GE ES44AC #8105 as second in consist. This is the first such sighting of one of Norfolk Southern's heritage locomotives coming to the Vancouver BC area. The 8105 is painted in an orange, black and cream white scheme of the Interstate Railroad which still is an operating subsidiary of NS in the southwest part of Virginia. I managed to get one usable time exposure of the 8105 on its way into Thornton yard at 22:00 Feb 14. Chances are this consist with BNSF 5375 leading will be southbound during the day on Sat Feb 15. 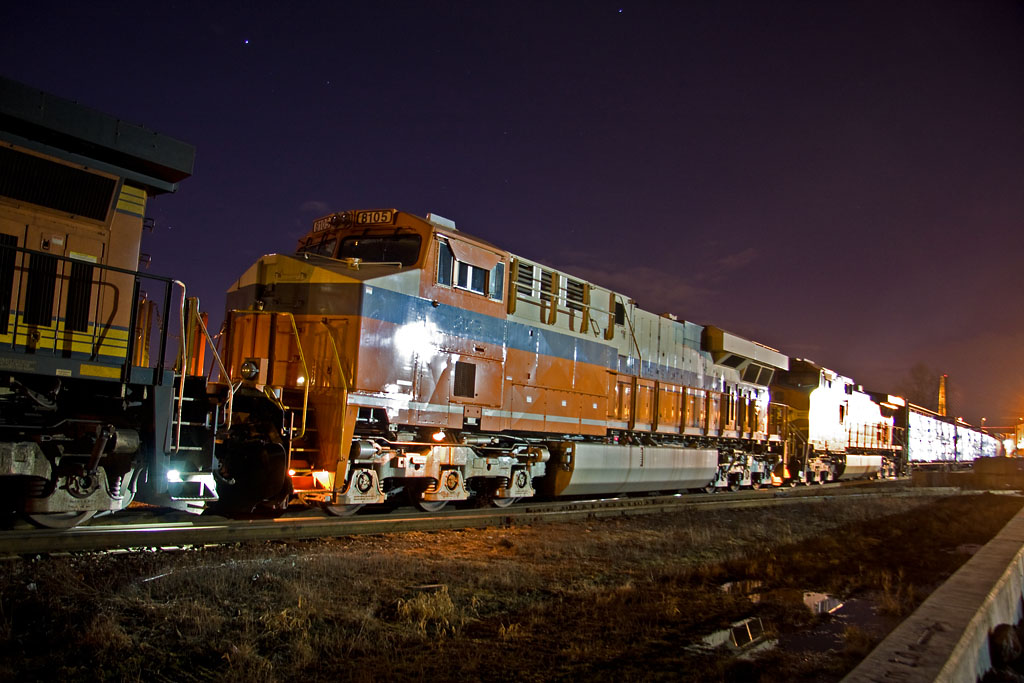 Earlier in the day CSX ES44AC #3093 was trailing in a two unit consist that arrived in Thornton Yard around 11:30am. 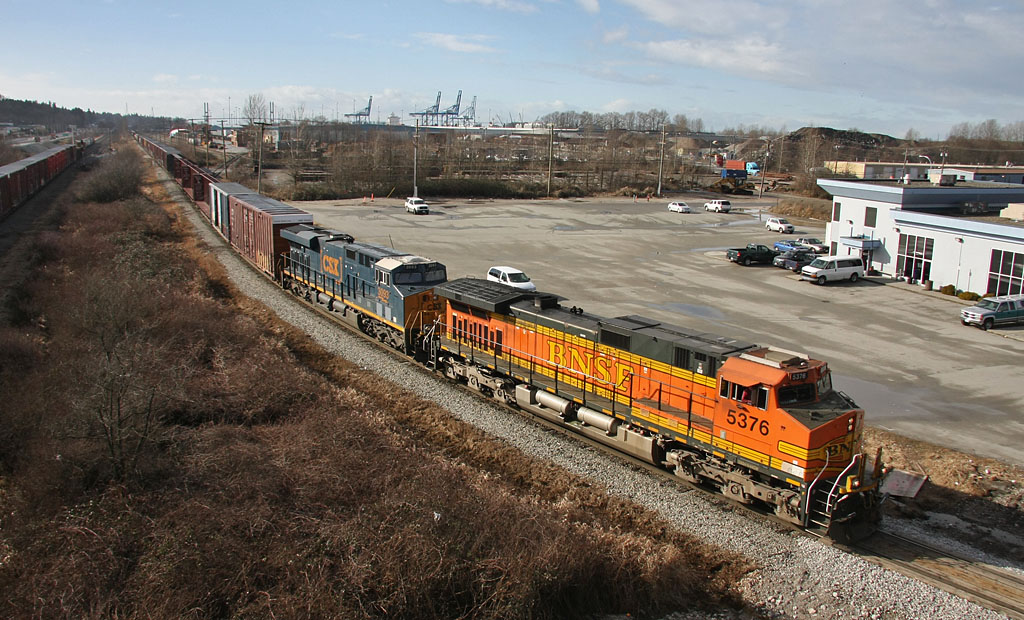 Then up on the former BC Rail word came that one of CN's recently acquired ex-EMD Demonstrator SD70Ace's was leading a very late southbound train 570 to Squamish. Delays in getting out of Lillooet resulted in train 570 arriving in Squamish at 16:56 which is eight to ten hours later than normal. Upon arrival in Squamish a crew for northbound train 571 was on duty and without turning the power proceeded northbound at 17:45.

CN 8013 is one of four ex-EMD Demo units acquired by CN and they were pressed in to service with only an application of the CN logo on the hood. Otherwise they retain their Blue, Silver and Black EMD paint.

I managed to catch train 570 in a few spots including Daisy Lake north of Garibaldi and arriving in Squamish. 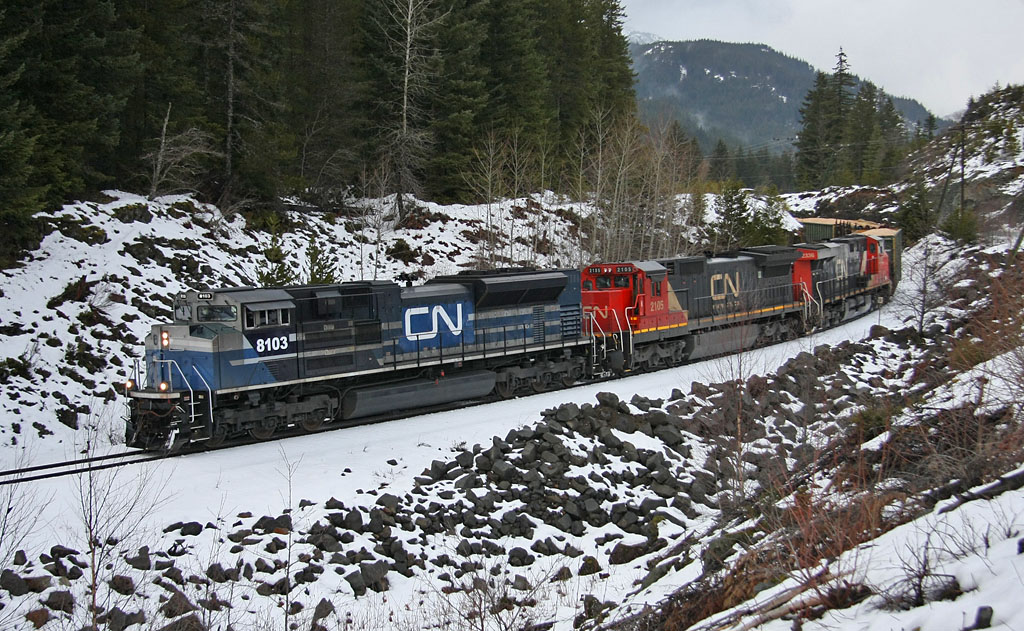 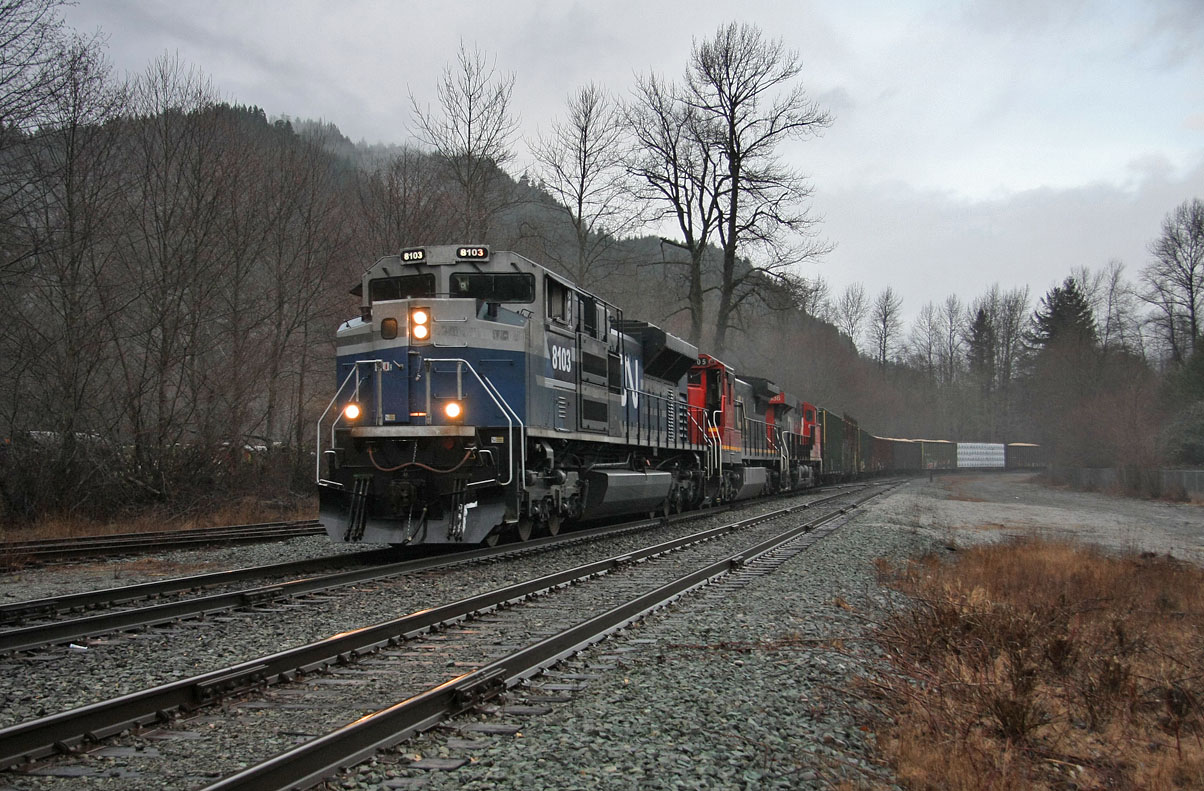 On my way home in the evening, after seeing the NS Heritage unit in Surrey, I spotted Union Pacific 4393 as part of a four unit set of road power in New Westminster!

Lots of interesting power around these days. 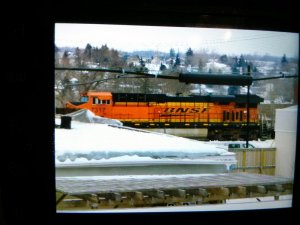 Nice photos. I have yet to see the Interstate unit although it has now gone through Edmonds (WA) three or four times.

The Interstate unit passed through Edmonds around 4:30pm Sunday (2/16) as the second of three units on a southbound (tt/west) freight. I posted two grab shots in my MP 18 thread.
http://www.railroadforums.com/forum/showthread.php?29675-Mile-Post-18-news/page127
A