The CStPM&O out of Florence heads west for awhile then heads north to Nashville via a series of deep cuts. I found an old Douglas County map from 1876 that gives a different route to Nashville. The line in red is the one we are familiar with and the line in yellow is the one in question. I tried to trace the map onto Google Earth with some success. See below: 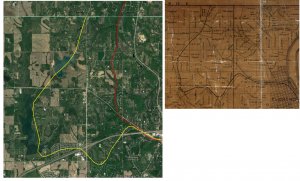 After some research, I found this article from a 1885 edition of the Annual Report of the Chicago, St. Paul, Minneapolis and Omaha (Do a search on Florence Cutoff NE Chicago Omaha and you should find it). I find it interesting that the cut-off saves almost 5 miles of track. Which is the difference in length between the old and new routes. See below for excerpt from this manual: 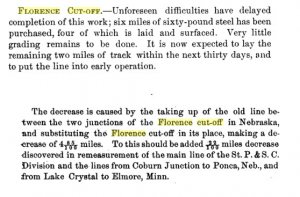 Then I found a 1885 Washington County, Fort Calhoun Township map that clearly shows the 'Old Line' and the 'New Cut Off'. See below: 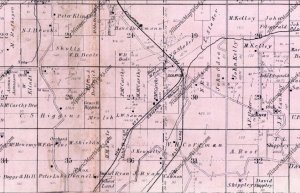 Does anybody have any more information about this 'Florence Cut-Off'? Was that 1876 map accurate?

I just found this thread in a google search unfortunately though I cannot give you more information. I believe there was a definitely another route as I have another book that references the Florence cut off being built around 1883 to 1884 I believe. The two maps you posted above are the only two maps I have been able to find of it. However I think the old and new lines should be switched around in the second map. I have aerial maps of when the line to Blair was up and by taking a close look at the creek I think the old line should be on the left. Considering that the old line would have been taken out 130 years ago I doubt there is anything left but who knows? Btw if you google historic aerial maps you can see the "new line" which was taken out in the 80's. Studying it could help give clues to where the old line was.
V

The attached map is from 1952 and is from just south of Fort Calhoun, Nebraska on highway 75. This would be the cut off line mentioned in the maps. See where the creek splits off? If you compare it to the last map you showed the new line is running to the right of the creek so the old line must have been on the left. Which is why I think they were mislabeled. If you find something more on this route or if somebody else does please post!

PS! On second thought after looking the maps the creek could have changed course as often happens.

I think there is a thread here somewhere talking about Briggs, which was aplace where the Omaha road built a new track around Florence to get into the stockyards in South Omaha. I also have some maps but I'm in the process of sorting stuff and have temporarily misplaced the history file. I'll find it but it may take a bit.