Going through my photo archive, I'll share a quick tour of San Diego from the past few years. My work would occasionally take me to this beautiful city with the wonderful weather on the coast. I was mostly limited to what was within walking distance of my hotel, so unfortunately no freight action or anything further out. 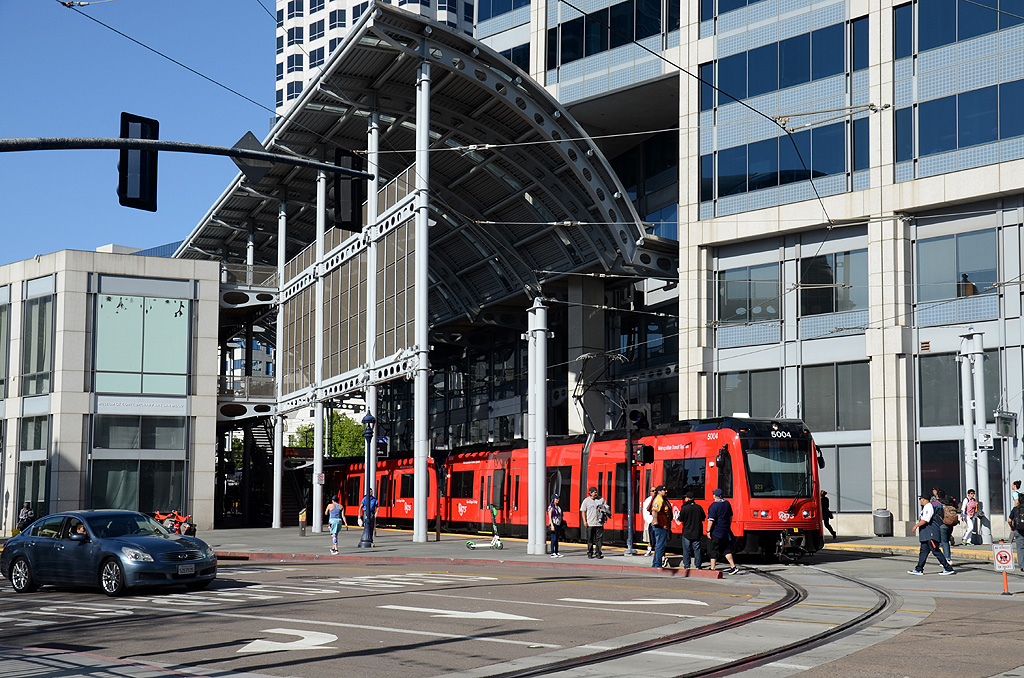 The light rail is known as the "San Diego Trolley," and runs from San Ysidero in the south, up to Santee about 20 miles northeast of downtown. In this image from 2019, a train is pulling out of America Plaza, in the heart of downtown. 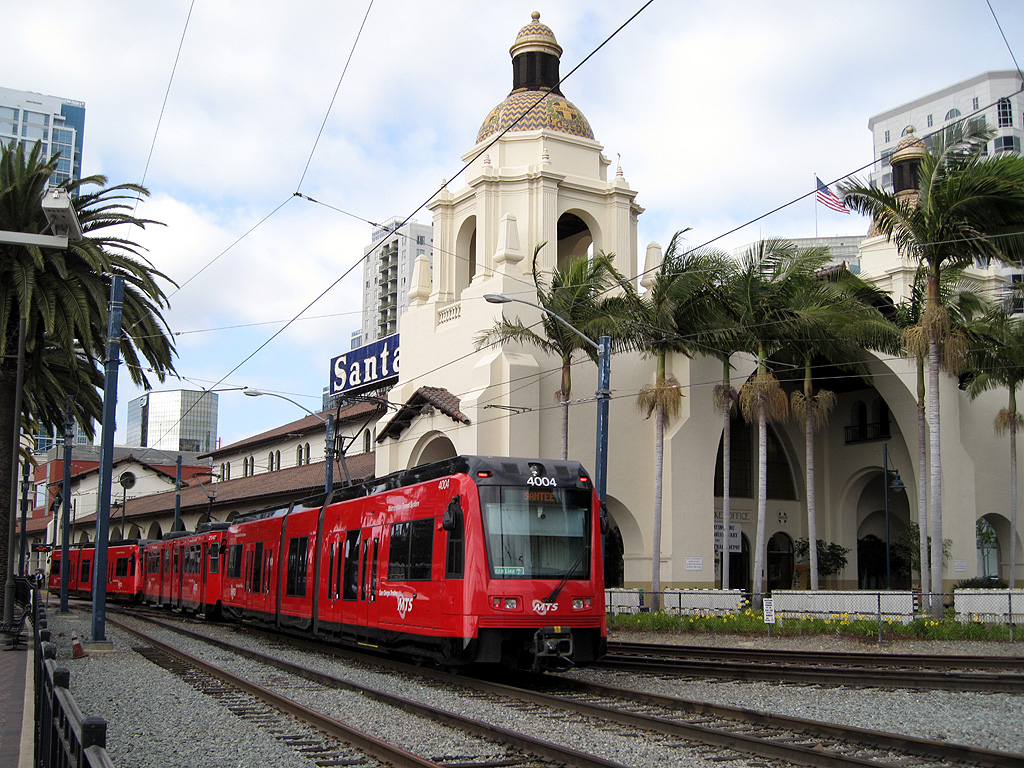 Just a block away is the famous Santa Fe depot. The station opened in 1915, replacing an earlier terminal on D Street. 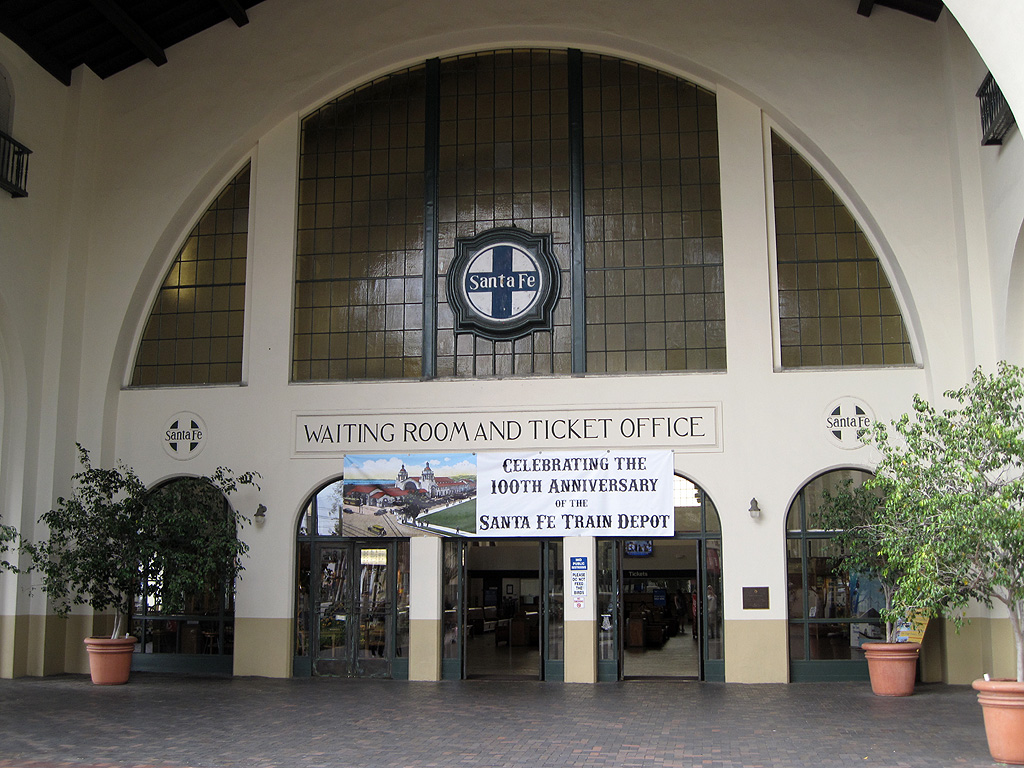 Over the years, the station has served the Santa Fe, San Diego Electric Railway, San Diego & Arizona Railway, and Amtrak, as well as local transit. It was almost demolished in 1972, but was saved by local residents and historic foundations. Amtrak agreed to keep the station if the city would redevelop the surrounding neighborhood. 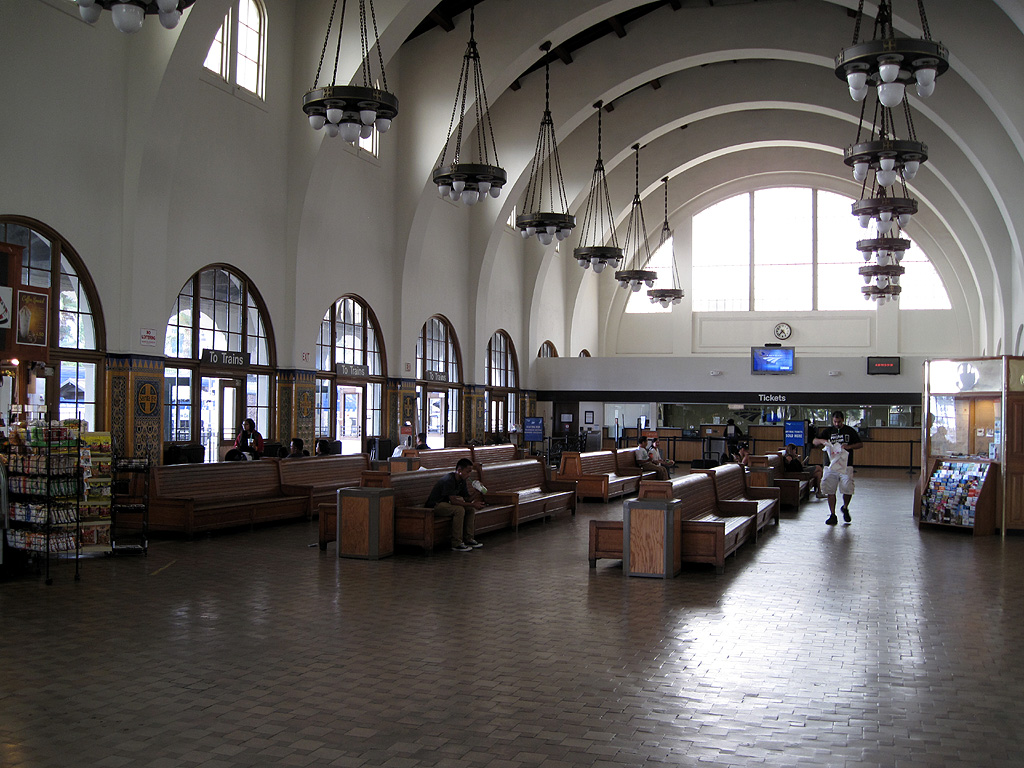 Inside the waiting hall. There are still plenty of ATSF reminders throughout the station. 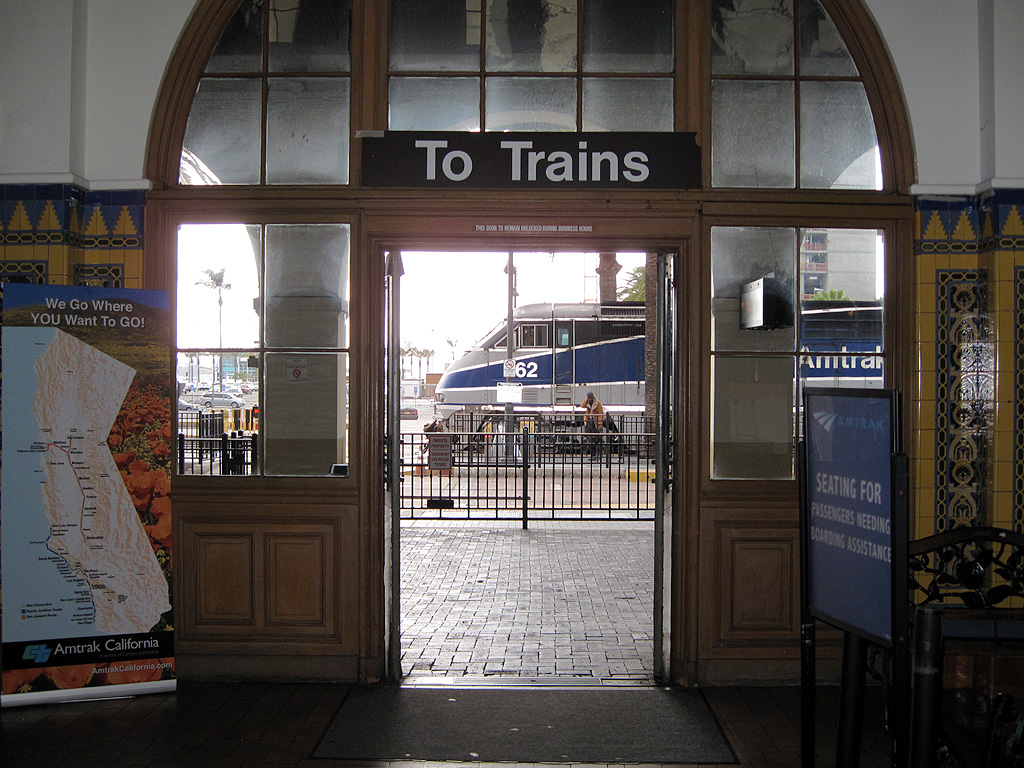 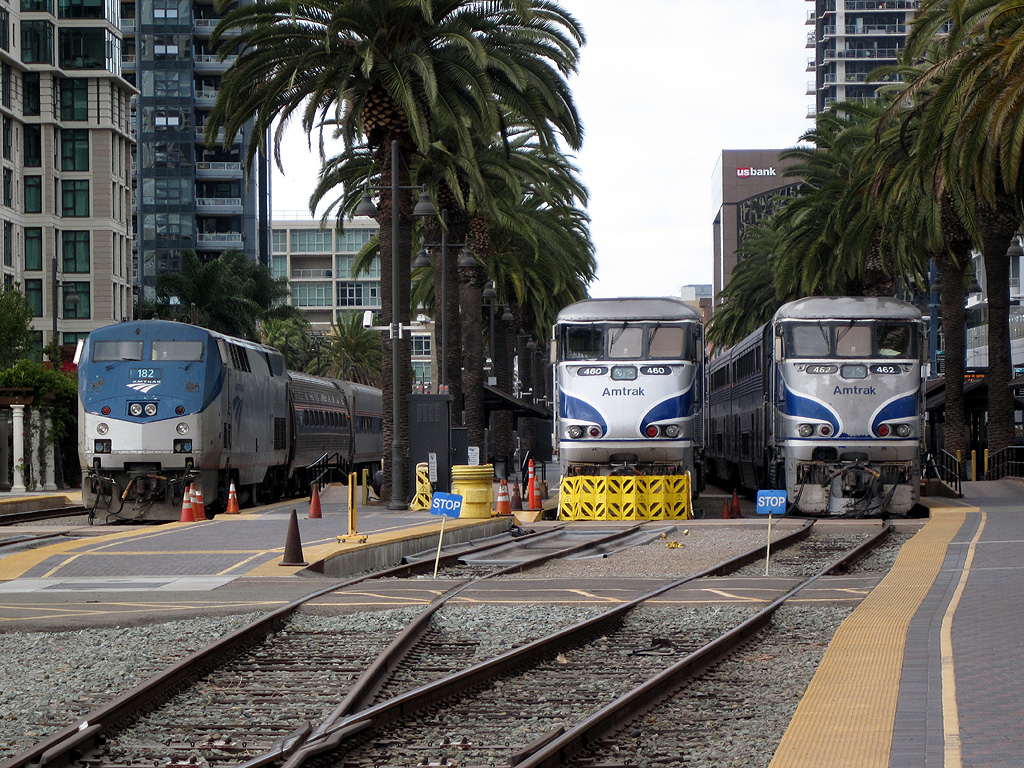 Two F59PHI's are joined by a P42DC on the platforms outside. Taken May 2015, if I remember correctly, the Surf Line was shut down for maintenance that weekend, so there were three trains parked cold at the depot that day. 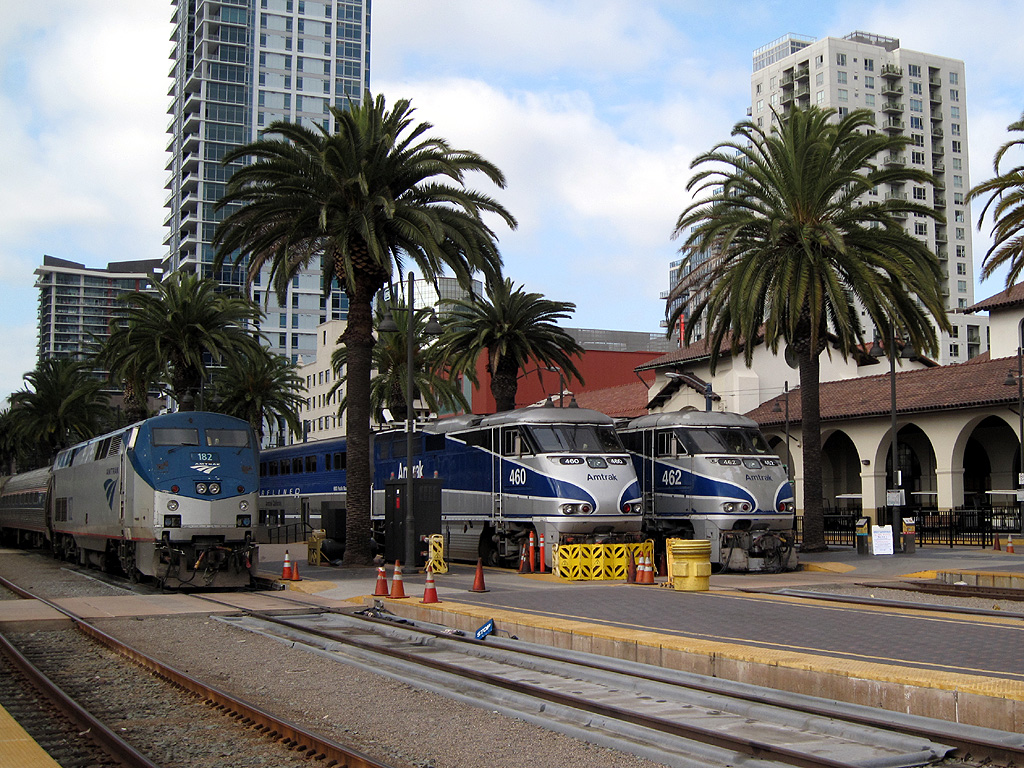 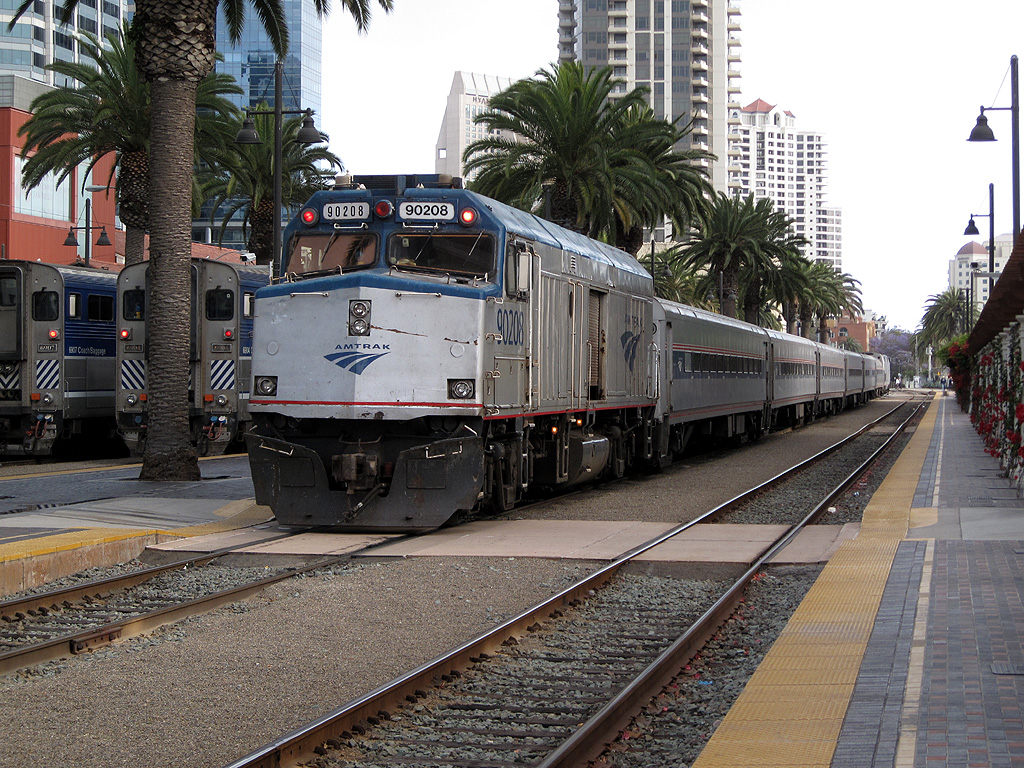 At the other end is cabbage 90208. The Surfliners operate in push-pull mode. 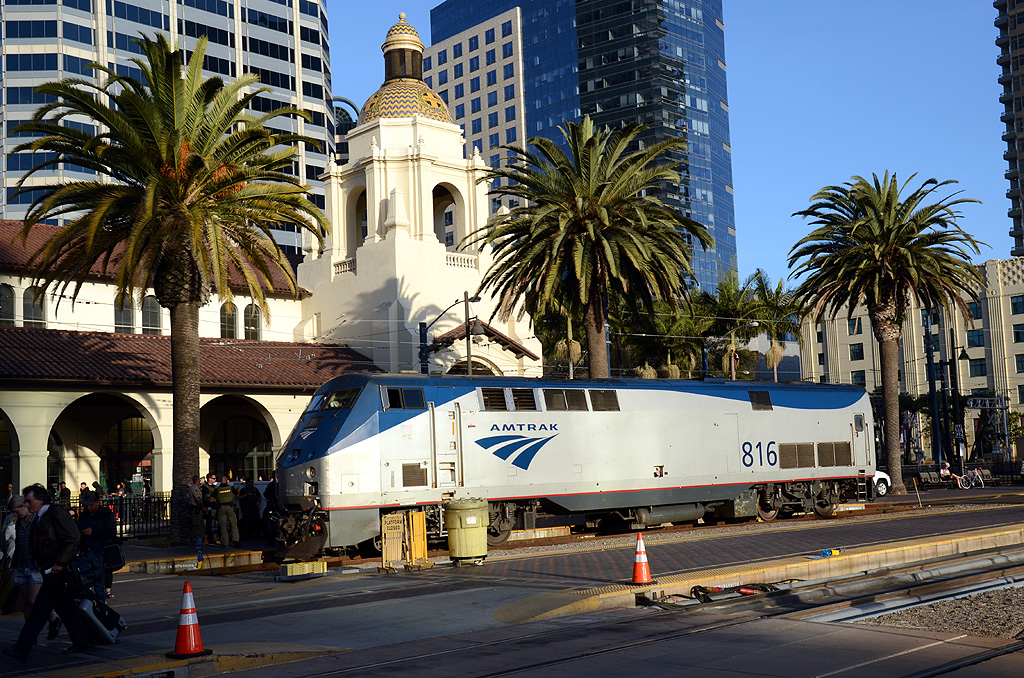 AMTK 816 sits solo in this shot from May 2019, as passengers board a northbound Surfliner to the left. Not sure what was going on with the law enforcement presence, or if that's normal during busy times. 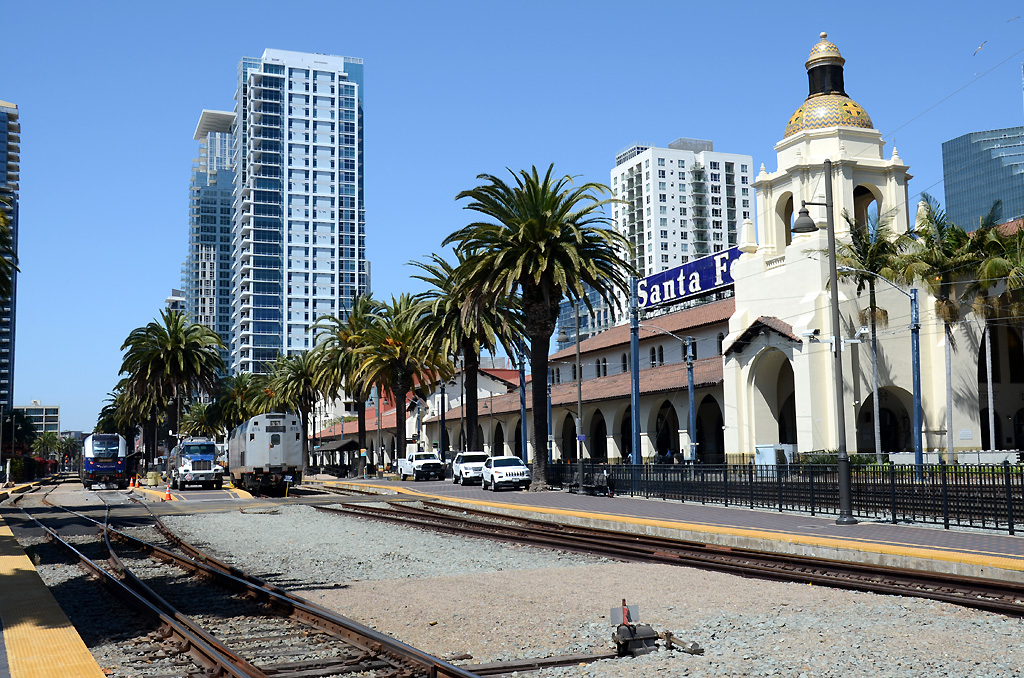 You've probably seen historic pictures of the station and its famous Santa Fe sign, which was added in the 1950s. Unfortunately, it's difficult to get train pictures with the sign in it, because the palm trees have grown so much over the years! 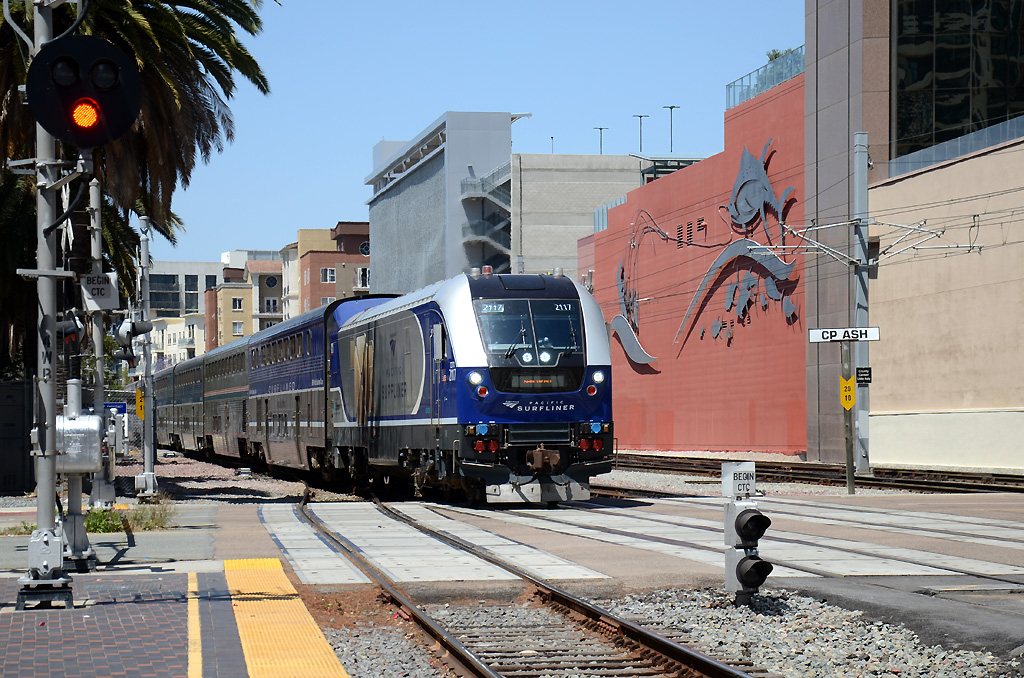 The new Siemens SC-44 Chargers can now be found on the Surf Line, here's CDTX 2117 approaching the station in May 2019. CDTX is the reporting mark for Amtrak California. 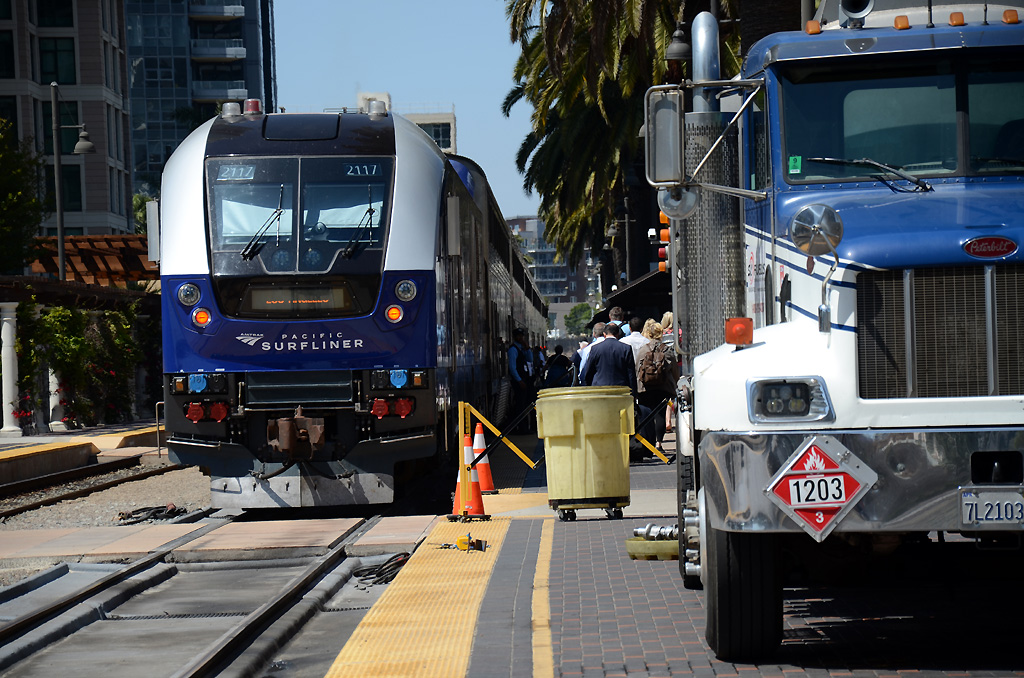 About an hour later, passengers board for the northbound return run to Los Angeles and points north. A mobile fuel rack sits on the platform. 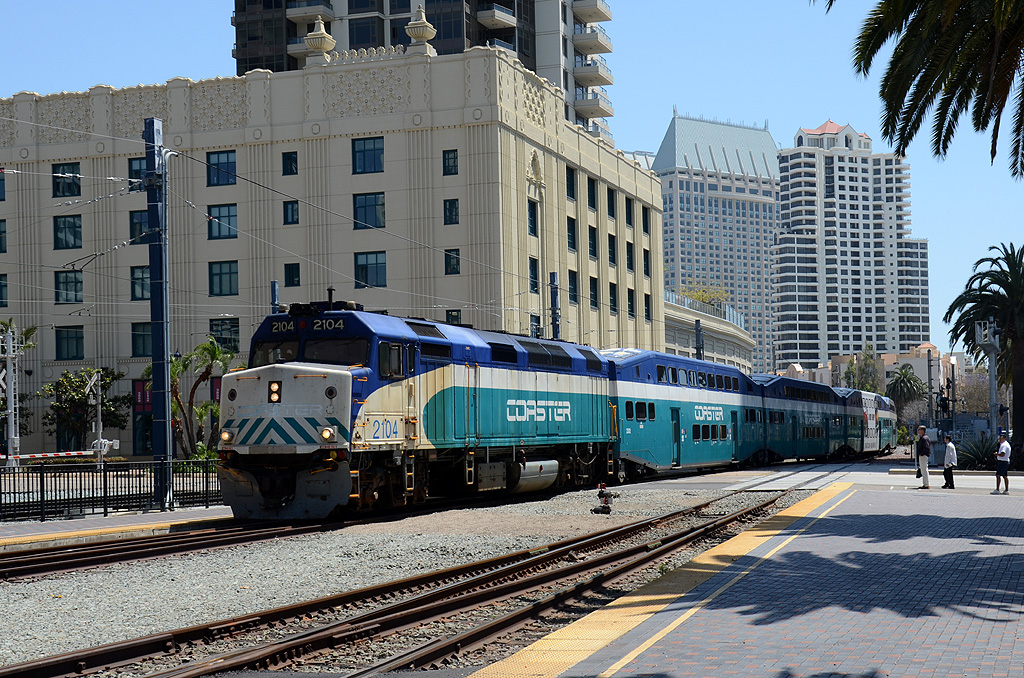 Oh, the Coaster commuter train also serves the station, running from San Diego north to Oceanside. Here #2104, an F40PH, is entering the station from the south. I'm guessing the service area or coach yard is to the south, since there are no passenger stops south of the depot. 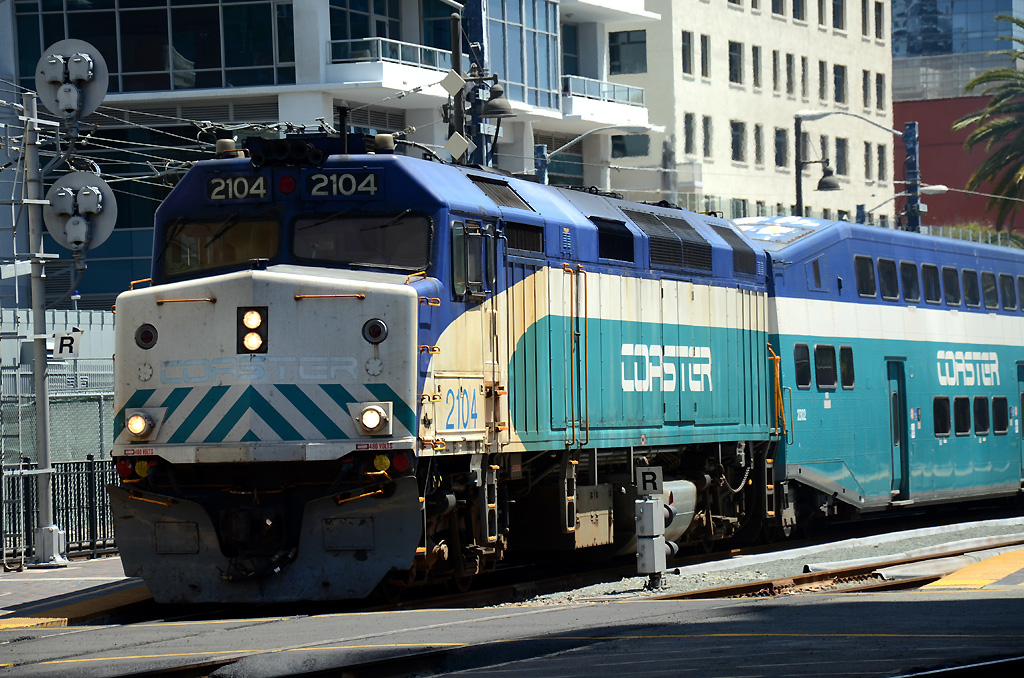 Closeup pulling out of the station after loading passengers. 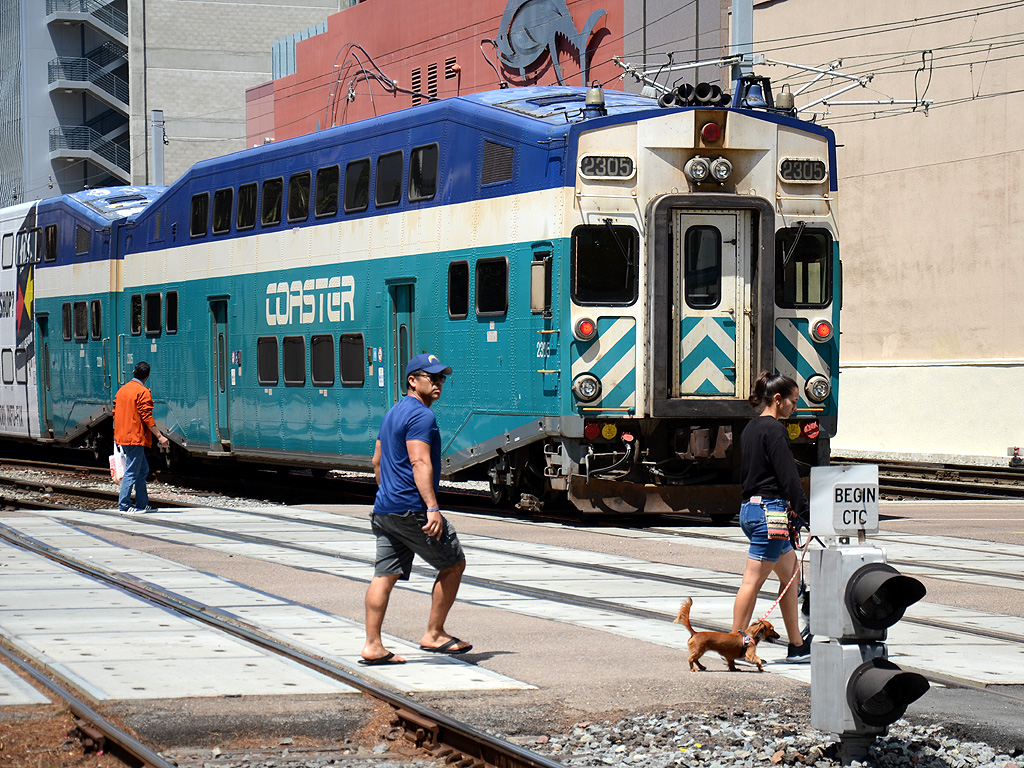 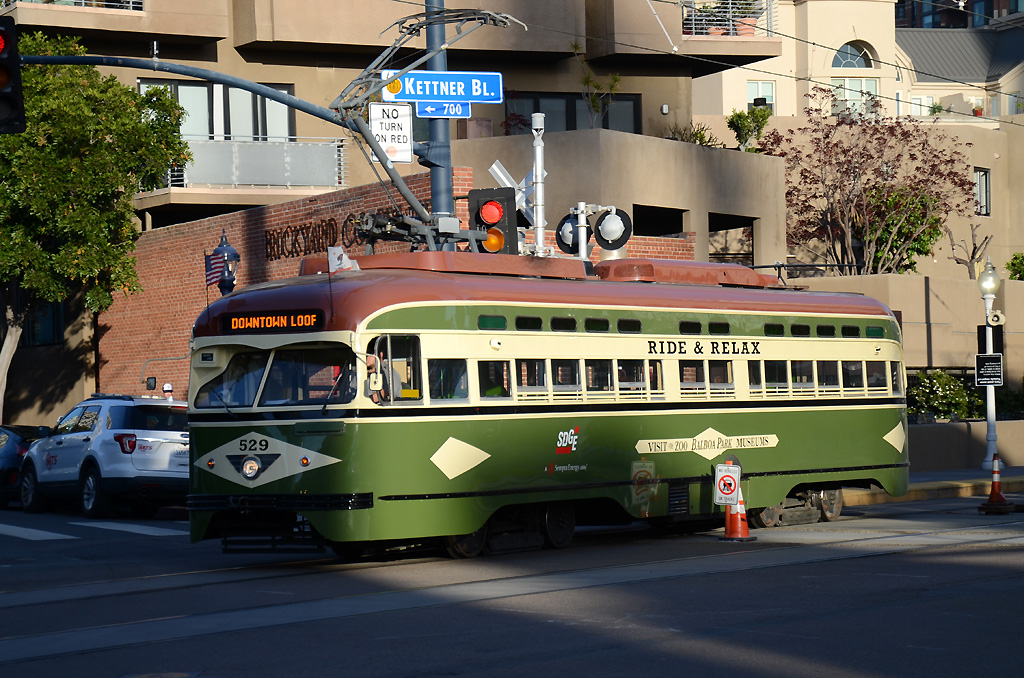 And finally, walking back to my hotel, heard a ding-ding-ding behind me. Spun around in time to catch a view of one of the vintage trolleys running on the Silver Line downtown loop.

If you ever get a chance, check out San Diego. Easy to get around, lots of history, including naval sites like the USS Midway and Maritime Museum, great food in places like the Gaslamp Quarter, Little Italy, or Harborview neighborhood, and (usually) nice weather. There's also a great hat store in Seaport Village.

Great shots. Thanks for posting.