The Chicago Transit Board today awarded a contract for the newest generation of CTA rail cars—the 7000-series—continuing the unprecedented modernization of the CTA under Mayor Rahm Emanuel while fostering economic development and job creation in Chicago.

The new 7000-series rail cars—the largest rail car order in CTA history—will be built by CSR Sifang America JV, which as part of its winning bid has pledged to build a brand-new rail car assembly facility in Chicago – the first of its kind in 35 years. The facility is expected to generate 170 jobs, and represents an investment of $40 million.

“With this agreement, CTA riders will get state-of-the-art rail cars and Chicago returns to our roots as the place where the next generation of rail cars are built, providing good jobs for our residents. That is a classic win-win for Chicago,” said Mayor Rahm Emanuel. “This historic agreement was the result of strong collaboration between the City, our federal partners, the Chicago Federation of Labor, and Jobs to Move America, and I cannot thank them enough for their partnership in making it possible. Working together we will continue to bring more 21st century manufacturing jobs to Chicago while also building a modern CTA to help power our 21st century economy.” 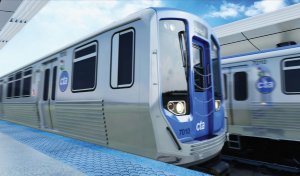 “Providing modern trains and buses is a critical part of having a world-class transit system,” said CTA President Dorval R. Carter, Jr. “This rail car purchase—the largest in CTA history—will give CTA one of the newest fleets in the United States and provide our customers with state-of-the-art trains providing comfortable, reliable rides.”

In July 2014, Mayor Emanuel and the Chicago Federation of Labor announced a partnership to encourage the creation of U.S. manufacturing jobs, by working with CTA to include a “U.S. Employment” provision in the bids for the new 7000-series cars. The bid solicitation asked bidders to provide the number and type of new jobs they planned to create related to the production of the new rail cars, as well as an outline of their job recruitment and workforce training plans.
CSR submitted the lowest bid of $1.309 billion for 846 railcars. CTA will purchase a base order of 400 cars first, with options to purchase the remainder in coming years.
Prototype models are expected to be complete in 2019; following testing, the cars will go into service in 2020. The cars will be assembled in a new facility CSR plans to build in Chicago.
CSR is one of the world’s largest rail-car manufacturers, and since 1962 has built more than 30,000 rail cars for more than 20 countries in Asia, South America and the Middle East. In the United States, CSR is building rail cars for Boston’s transit system.

“It has been over 30 years since the last rail car rolled off the Pullman assembly line on Chicago’s Southside,” said Chicago Federation of Labor President Jorge Ramirez. “Today’s announcement is the culmination of nearly two years of collaboration with Mayor Emanuel to bring rail car manufacturing back to Chicago where it belongs. We commend the CTA for including the U.S. Employment Plan in this bid process, leading the way to high road manufacturing jobs, and thank Mayor Emanuel for his ongoing commitment to build a world class transit system."

“Chicago is a shining model for the rest of the nation, providing a blueprint for leveraging the billions of public transit dollars spent each year to bring back manufacturing, encourage investments in workforce training, and jobs for U.S. workers. We look forward to partnering with CSR to deliver a high road program that prioritizes the creation of career paths for Chicago’s low income and communities of color,” said Jobs to Move America National Policy Director Linda Nguyen Perez.

The new rails cars will feature of mix of forward-facing and aisle-facing seats, a seating configuration designed to ensure customer comfort while maximizing passenger flow and capacity. The design was based on studies CTA conducted to solicit feedback from CTA riders on preferences related to seating and design— the first time the CTA has sought rider input on seating layout.
The cars’ design will resemble the 5000-series, the CTA’s newest rail cars, with stainless steel bodies, LED lighting and signage, and AC power propulsion for a smoother, quieter ride. The cars will replace the oldest cars on the CTA system, some of which are more than 30 years old.

Once delivery of the new rail cars is complete, the CTA will have its youngest rail fleet in decades—reducing the average age of CTA rail cars from 26 years in 2011 to 13 years when the 7000-series are delivered. The new rail cars are projected to save the CTA about $7M annually in reduced maintenance costs and reduced use of power. 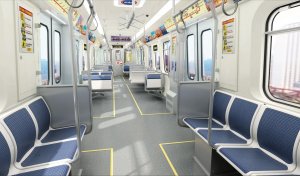