Last weekend was my 45 year high school class reunion in Lewiston, ID. Unlike the last three reunions (30, 35 and 40 year), I decided to drive my pickup to Lewiston instead of riding my motorcycle. One reason for the change of transportation was so I could drag along my photo equipment to take shots of things I had only ridden by in the past.

First stop on the way to Lewiston was Royal City, WA., where this six axle Baldwin road unit has been sitting for over twenty years. Royal City is at the end of a former Milwaukee Road branch line. 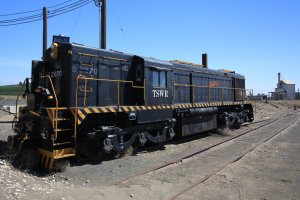 Looking east toward the end of the branch line. 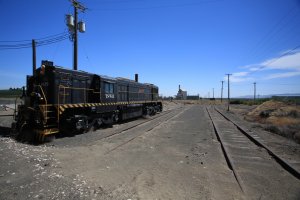 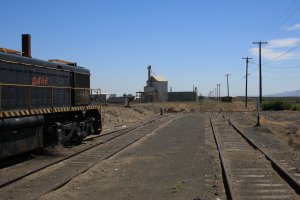 Looking back west. The rails behind the diesel have either been cut up or covered over, so it is not going anywhere soon. 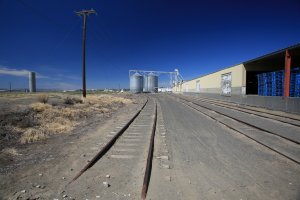 The engine is lettered TSWR and numbered B-2070. I have no idea of the model or its former owner. Given the general paranoia these days, I did not want to stick around for an extended period of time looking for a builder's plate. If anyone has info on the engine, please share it with the rest of us.

The following day (Thursday, 8-8) I drove north from Lewiston to have brunch with fellow railfan Matt Farnsworth and his family at Moscow, ID. Matt has taken a lot of videos of the Washington & Idaho Railroad (WIR), which runs on the former Washington, Idaho, & Montana Railroad and the Northern Pacific's P & L branch. The WIR has been hosting a former Canadian F-unit, MRLX 6304, which was repainted into the Southern Pacific's "Black Widow" scheme.

Matt had reported that the owner of #6304 is going to move it to Saskatchewan to be placed on static display. The engine was scheduled to leave the WIR on Wednesday (8-7), so I had missed it by one day. After brunch with Matt and his family, I drove north of Pullman to Kamiak Butte County Park, where I hiked up to the summit of Kamiak Butte and back down, about 5 miles total in +90*F heat. It was my first time hiking Kamiak Butte. I could not help but think that it would have been so much easier 40+ years ago when I was a student at WSU.

In many Asian cultures, the number "8" is the lucky number. August 8th (8-8) is the luckiest day of the year as well as Fathers Day in China and Taiwan. As the husband of a Japanese-American woman, a Mandarin speaker, and the father of two adopted Koreans, I must have acquired some of that Asian luck.

After conquering Kamiak Butte, I drove north to Palouse to get something to drink and explore the old trackage in town. As I headed west on Hwy. 272 toward Colfax, I drove past #6304 coupled to WIR GP-30 (my favorite second generation EMD unit) #20. My drive to find a place to turn around took me up out of the valley to a spot where I could photograph the sunlit sides of both engines. 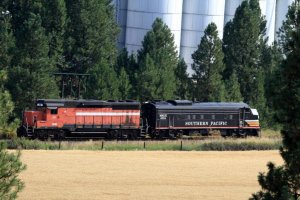 I turned around and drove back down to get some close-up shots. While I was taking photos, a railroad employee fired up both engines. He told me that #6304 would not be leaving until the following day. Gotta love that number "8" good luck. 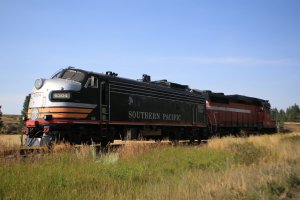 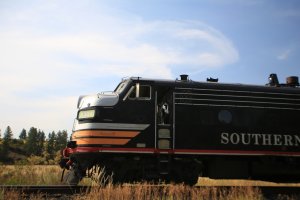 The railroad employee also told me about a Budd car sitting in the yard in Palouse, which he said it was a track inspection car. According to him, the car had a hydraulic drive shaft which powered cooling equipment to keep the computers and other instruments from over heating. If anyone has any info on this car (PPCX 15112), please speak up. 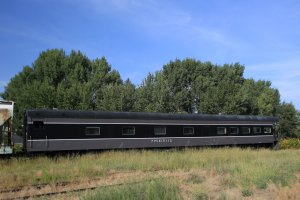 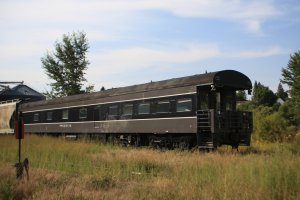 At one time three railroads went into Palouse: the Washington, Idaho & Montana, the Northern Pacific's P&L branch, and the Great Northern's Spokane-Moscow ID branch line which was originally an overhead electric interurban line. There is still a lot of old trackage in Palouse that is well worth stopping to explore if you are in the area.
Last edited by a moderator: Aug 15, 2013
M

Bill Anderson said:
First stop on the way to Lewiston was Royal City, WA., where this six axle Baldwin road unit has been sitting for over twenty years.
Click to expand...

It's actually an ALCO-built MRS-1.

Thanks. Is it just going to sit there for another 20 years?

Bill Anderson said:
Thanks. Is it just going to sit there for another 20 years?
Click to expand...

Someone should buy it and restore it before then.

PPCX 15112 according to this link, has been converted back into a business car:

Got anymore photos, Bill? I would like to see what you found in Lewiston.

Either they moved the Royal City ALCO since I photographed it in 2000, or they tore down some sheds that were around it. The engine is seemingly on static display for the past couple of decades, though I imagine there are long stretches of time when no eyes look upon it. Kind of sad.

Facing West said:
Got anymore photos, Bill? I would like to see what you found in Lewiston.
Click to expand...

No more railroad photos, as it was too *&^%#@ hot to do any photography in Lewiston . I told the reunion planning committee that we should all be retired in five years, so please schedule the 50 year reunion in the fall.

I want to return to Lewiston in November so I can take more photos of the area without running the risk of a heat stroke.
B


Bill Anderson said:
Thanks. Is it just going to sit there for another 20 years?
Click to expand...

The railroad (Othello - Royal City) and that Alco MRS1 belong to the Port of Royal Slope. They have been doing some preliminary work toward the goal of re-opening this line. Here is their web site:

If you look at the left-bottom of the "Welcome" paragraph you will see a clickable link labeled "Railroad Info". Click on this and you can download a 7 MB "raildocs.zip" file. This file took about 7 seconds to download on my Comcast cable connection. The zip file contains 4 files:

Figure 5 on page 3 of this report contains a nice picture of Little Joe E-20 with the following caption: "Figure 5 – Electric locomotive or motor typically used on the line before 1972". This is NOT TRUE. Little Joes were briefly tested when new in 1949 but were never used on the Coast Division because the substations lacked capacity to run them. The Joes spent their entire lives on the Rocky Mountain (Avery ID - Harlowton MT) division.

This would have been a more accurate picture for them to have used. Boxcab electric E22 at Othello, 1962: 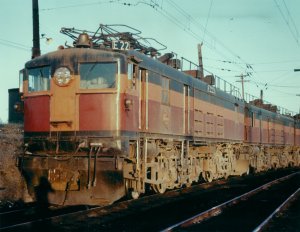 Finally, here is a link to a Progressive Railroading article: http://www.progressiverailroading.com/mow/article/Washington-port-seeks-bids-for-Royal-Slope-Railroad-trackwork--35264#

Thanks for all the info, Bruce. I'll check it out later tonight. BTW, I always think of your great color photos of the P&L from the early-mid 60's whenever I am up on the Palouse.

Sorry to dig up an old thread, but have you ever checked out the Camas Prairie Railroad—now owned and operated as the Bountiful Grain and Craig Mountain Railroad—which operates out of and around the Lewiston area? The Second Subdivision, which originally went from Spalding (east of town) to Grangeville through Lapwai Canyon, is famous for its six tunnels and numerous wooden trestles, a few of which can be seen from US-95. The line is now only used to Culdesac for the storage of empty cars after Bridge 21.3 burned Sept. 2011 in a forest fire.

Last July I took a two-day bicycle trip from Moscow down to Lapwai Canyon to photograph these trestles while walking along the line, a partial attempt to recreate in color the famous Historic American Engineering Record survey from 1967, the photos of which are now on the LoC website. I took several hundred photos, of which several turned out pretty well—well enough to produce a "Trestles of the Camas Prairie Railroad" 2014 calendar, available from print-on-demand site Zazzle. My store, which has several posters and other products from this trip, can be found at http://www.zazzle.com/JuDGe3690_art?rf=238526406419088856. Also, a recap of the trip and links to each day's photos (about 400 in total) can be found on my blog, http://judge3690.wordpress.com/2013/10/20/camasprairiephotos/. The photos are public albums on Facebook, so you do not need to be a member or friend to view them.

Update: Here is a link to a 2015 inspection report report from the Port of Royal Slope website.
http://www.portofroyal.com/project/uploads/2016/06/April2015Inspection.pdf

According to the website, a locomotive ran up to Royal City. The date is not given, the caption just says it was the first engine to run up there in 25 years.
http://www.portofroyal.com/all-about-rail/