Saw this unit last week at the BNSF's diesel facility in Newton, Kansas 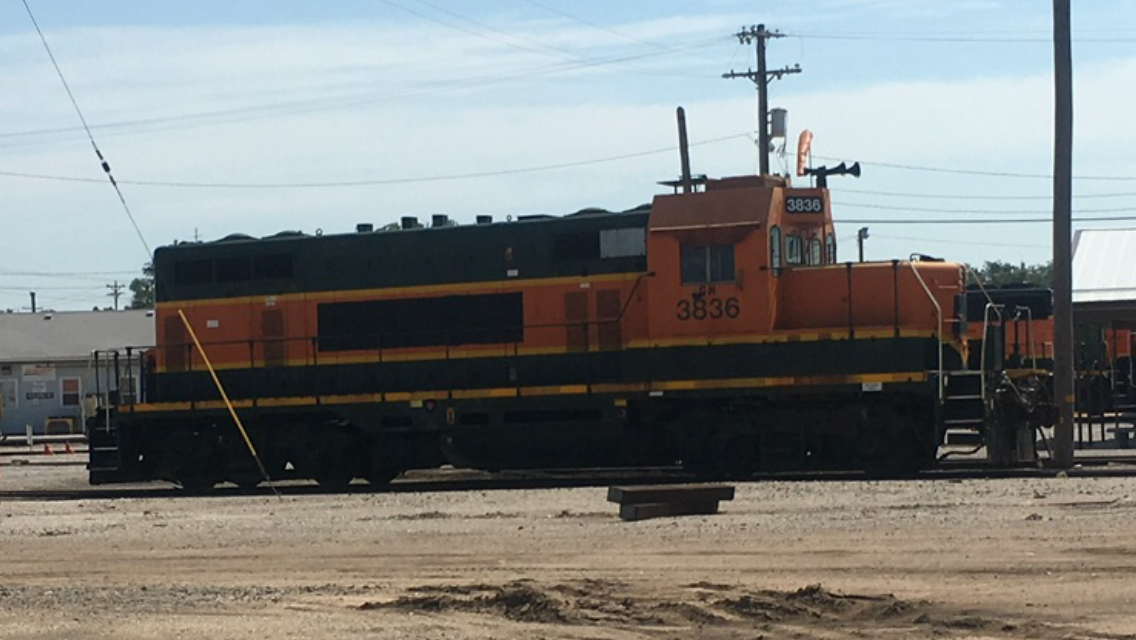 BNSF 3836 is a GP7u owned by BNSF Railway. It was built 12-1952 for the Atchison, Topeka and Santa Fe Railway as a GP7 numbered 2843 and part of Electro-Motive Division of General Motors order 6486. It carries builder number of 17704, frame number 6486-6. The GP7 is widely regarded as the diesel that ended steam on many U.S. Railroads in the 1950's, replacing thousands of steam locomotives on dozens of carriers during its production.

It was delivered with a high short hood wearing the silver and black “tiger stripe” paint scheme, later repainted into the dark blue and yellow “bookend” paint scheme in the 1960's.

The 2843 was rebuilt by the ATSF Cleburne, TX Shops, completed in December 1981 as a GP7u and mated with a road slug, commonly operating out of Dodge City, KS. During this rebuilt it was “chop nosed”, a shortening of the high short hood. Also came the application of a new cab, with a distinctively higher roof and steeper beveled edges. The origin and construction of this design was at the Santa Fe Shops in Topeka, KS, giving this type the common nickname “Topeka Cab”. It was also repainted and became ATSF 1327.

During the mid-1980's it was painted into the yellow and red SPSF “Kodachrome” scheme of the proposed Santa Fe Southern Pacific Corporation merger, which was denied by the ICC in 1986, and painted back into the Santa Fe “yellowbonnet” paint scheme in the early 1990's, maintaining the same number throughout.

The engine and slug pair continued to operate until late 2008 mostly out of Dodge City until stored by BNSF in LUGO (Laid Up Good Order) status at Newton, KS. Its FRA qualification was valid through 1-25-09, and it was listed LUFS (Laid Up For Sale) as of 12-13-13. The engine was relettered to GN 3836 on 3-20-14. The former Great Northern Railway reporting mark is commonly used as a placeholder set of initials by BNSF for engines awaiting disposition, or those displaced by the current locomotive numbering plan.

The unit was replaced in its final service by newer locomotives relegated to local and road switcher duties, and was known as the final GP7 operated by BNSF Railway.

The former Great Northern Railway reporting mark is commonly used as a placeholder set of initials by BNSF for engines awaiting disposition, or those displaced by the current locomotive numbering plan.

Thanks. That explains the GN numbering I have seen on some older BNSF units.
A