The new main 3 from Kelso to Longview Junction South appears to be complete now. The last step was to build the track across the crossing at the north end of the yard and run it across the newly completed bridge over the Coweeman River. It looks like it's well ballasted and tamped. I wouldn't be surprised if it gets put into service soon. Meanwhile in Kalama, they are still doing fill and retaining wall work for that main 3 segment.

The new main 3 in Kalama from Peavey to Toteff is now complete. The tampers and ballast regulators have been doing their thing and the track looks like it's ready to be put into service.
B It appears as though a new siding is being constructed on the Fallbridge Subdivision about 38 miles east of Vancouver between Skamania and Stevenson, in the North Bonneville area west of tunnel 1.5. Two new switches are being assembled next to the main line about 10,000' apart from each other. There are no road crossings in the area, unlike the sidings at Skamania and Stevenson which both have crossings in them that train crews are not supposed to block during certain hours of the day. The main line where this new siding will be has two small bridges that cross over roads, so two new bridges to accommodate the second track will need to be built over those roads. Other than that, only some minor fill work will be needed for the second right of way. The current intermediate signal at MP 48.5 is about halfway between where the two switches are sitting. The west switch is just east of the bridge over Hamilton creek, so no new bridge will need to be built over that creek.
Last edited by a moderator: Jun 3, 2017
R

All this work begs the question: Is anything likely on Stampede/Yakima Valley subs and the tunnel this year? Are there more projects to lessen the clogging on Lakeside?
Lat sweek I took the train fromVancouver BC to Seattle. Looks like the track from Brownsville into Pacific Central Terminal could stand a bit of work, too.

They are currently building the switches for the new second mainline from Ferndale to Custer. They did a lot of sub grade work last year for that project. Two of the switches may already be installed, from what I heard. Traffic is increasing up there and the tunnels north of Bellingham are going to have their clearances increased to allow for complete intermodal container traffic. Currently, certain garbage containers and some select freight containers are the only double stacks allowed. You may see some container traffic on the Sumas sub soon while the work is going on in the tunnels on the Bellingham sub.
Last edited by a moderator: Aug 12, 2017
M

Pete Sakes said:
It appears as though a new siding is being constructed on the Fallbridge Subdivision about 38 miles east of Vancouver between Skamania and Stevenson, in the North Bonneville area west of tunnel 1.5.
Click to expand...

The siding will be called Melonas.
M

redlynx said:
All this work begs the question: Is anything likely on Stampede/Yakima Valley subs and the tunnel this year?
Click to expand...

Just the regular Capital gang work, this year. The Yakima Valley Sub already got some new rail. Mid-July, a rail gang will work the Stampede Sub for two weeks between Bristol and Palmer Jct. In August, there will be a quick visit by the Shoulder Ballast Cleaner and High Speed Surfacing crew between Easton and Lester.

markgillings said:
The siding will be called Melonas.
Click to expand...

They are really going to town on the Ferndale to Custer, WA double tracking north of Bellingham. I knew this work has been going on for over a year when I rode Amtrak through the area last year and saw all of the subgrade work. They hope to have it done in the next couple of months. The pictures I took today are not the whole story but some of it is boring. Such as culvert work going on in two places. I skipped taking pictures of that.

1. South Ferndale has a new cantilever for south bound movement. Clear signal is for a northbound manifest I will show later.

2. North Ferndale new south bound cantilever not in operation is in place. New #24 switches for the north part of the new cross over waiting for installation.

3. Looking south at an empty coal train in Ferndale siding and the already installed are the two new switches for the south part of the new crossover with another new cantilever installed but not operational for north bound movement.

4. The writing on one of the left hand #24 power switches. 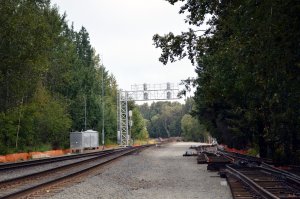 9. The northbound which I didn't bother to look up as to which train it was. Probably a Lakeyard VBT.

11. The big crane is at a new culvert site and the pieces are pretty big. This is looking north on a very long tangent up to South Custer.

12. South Custer with the original main line alignment is on the left. Two new cantilevers are installed but not operational and four new #24 (I believe) switches are installed for the northern part of the double track. The old mainline is used as a big lead for the locals and sometimes cars are stored there. 13. This looking south from the actual Custer sign. The farthest right track is the main going to Cherry Point and all of the industries out there followed by two yard/storage tracks toward the left. There is a manual hand throw crossover visible nearby to allow for the old mainline to be used for storage but still be able to access the south leg of the wye and the yard.

14. Looking north from the Custer sign. The main curves back to the original alignment in the distance. There is a manual hand throw switch to access the north lead leading to the north leg of the wye track out to Cherry Point. I didn't really think that I needed to drive up there to take a picture of that since it's been there for years and not part of the current construction. I just wanted to share what Custer looks like. I finally drove up to Swift to document the changes at Swift that allows three trains to meet there this Saturday, only about two years late, sorry. I tried taking pictures from a fast moving Cascades passenger train without much clarity last year.

2. Looking north from the road crossing there. Inspection track left, Siding center and new Mainline right. Speed for Amtrak through there is 79 mph even though there is the little S curve there.

3. Looking northwest at the cantilever at Horth Swift.

4. Loaded Coal train getting some paperwork at Swift. I saw the conductor come from the office there with paperwork in his hands. 5. Looking south from North Swift and again a two headed signal mast for entry into the three tracks. Yesterday, 8/22, this section of main track was shifted over to the new track through that crossing.
M

On Tuesday, 11/7, Ferndale and Custer will see significant changes. This is the cutover to the new second main. Ferndale Siding and Switch Custer will no longer exist. It will all officially become Main 1 and Main 2. There will be a 16-hour window to do all the track work and signal work/testing.

Thanks, Mark, I’ll have to get up there again and take some final pictures. Anything else planned in the near future?
P

BNSFEng said:
Anything else planned in the near future?
Click to expand...

On the Fallbridge subdivision, it looks like the new siding between Skamania and Stevenson is about ready for the track laying machine to do its thing. All the fill work is done and smoothed out, the two road underpass bridges are done, and there are little orange spray paint marks on the gravel designating the centerline of the new track.

Pete Sakes said:
On the Fallbridge subdivision, it looks like the new siding between Skamania and Stevenson is about ready for the track laying machine to do its thing. All the fill work is done and smoothed out, the two road underpass bridges are done, and there are little orange spray paint marks on the gravel designating the centerline of the new track.
Click to expand...