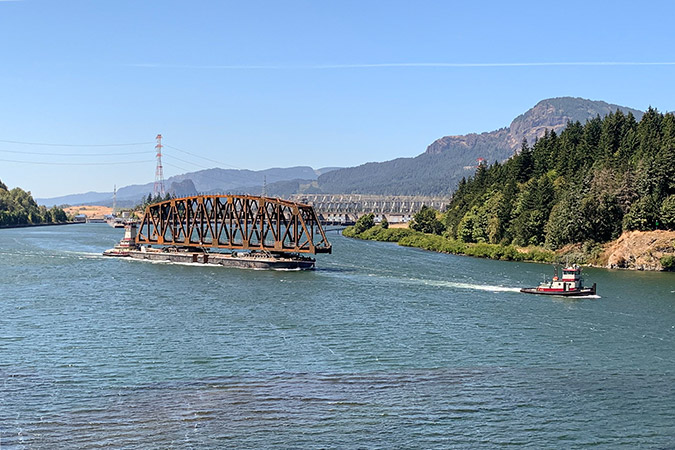 That’s what happened when BNSF floated in a new bridge to replace a century-old steel truss bridge over Drano Lake in Washington. The lake is fed by the Columbia River and in a remote area, with the bridge on BNSF’s line running east from Vancouver – an important route for grain export.

Using the river to float the new span 60 miles posed challenges for the Engineering team, which is used to building bridges on site. One significant challenge of this waterway is high winds. In fact, one section is known as the “windsurfing capital” of the world.

“With crane and barge operations involved, we had to make sure Mother Nature cooperated. Some days she did, some she didn’t,” said Mike Herzog, director, Bridge Construction. Smoke from nearby wildfires also added to the project’s challenges.

Having learned how to float bridges in during earlier replacements helped, and come late August, after lots of discussion about winds speeds and weather, the “all clear” was given to proceed. In 18 days the project was completed, with the first train crossing the new bridge Sept. 14.

Here’s a look at how we did it, safely and on schedule: 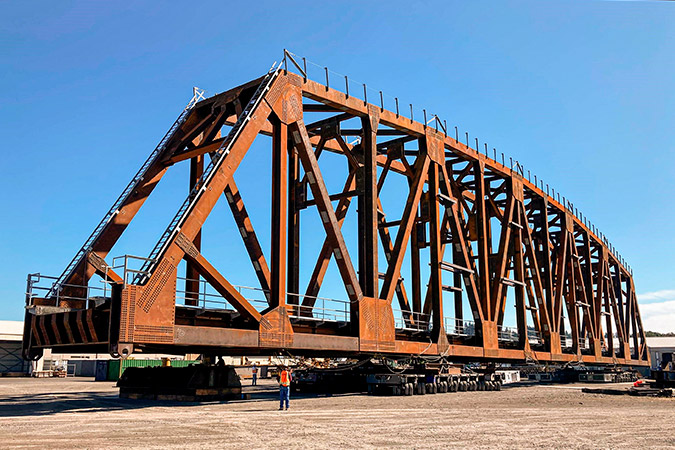 Starting more than a year ago, while construction crews were constructing foundations for two piers to support the bridge, a new 2.7 million-pound, 360-foot “through truss” span was assembled 60 miles from the site. 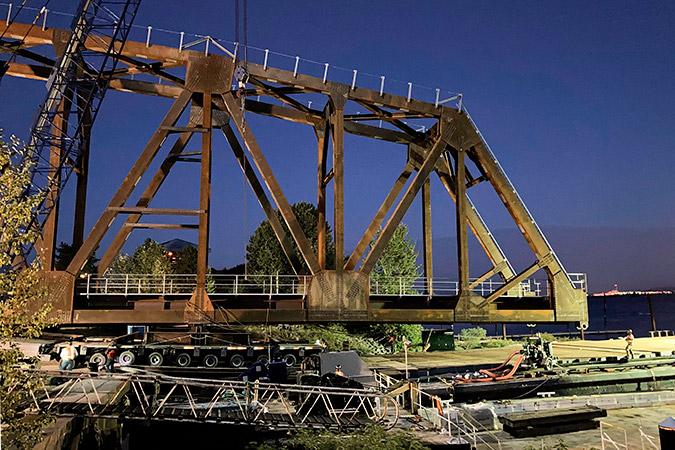 With the “all clear” signal, the assembled span was slowly moved on Aug. 24 using two pairs of 40-wheel self-propelled flatbed trailers that positioned it from an industrial yard, down a ramp onto the barge deck. 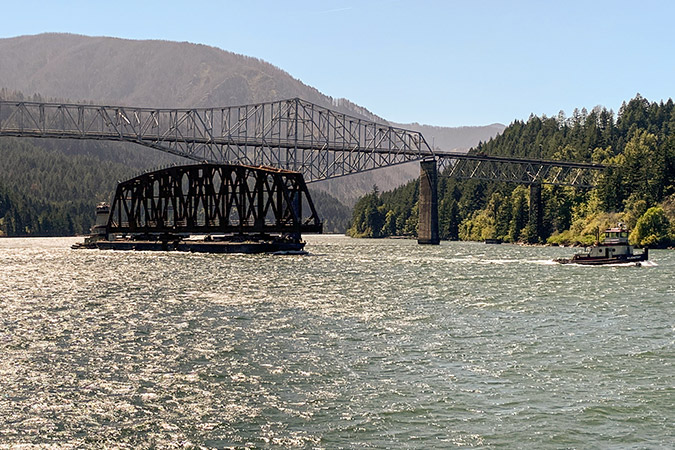 A few days later, secured to the barge pulled by a tugboat, the bridge began its travel upriver. To cover the distance to the site took about 24 hours. 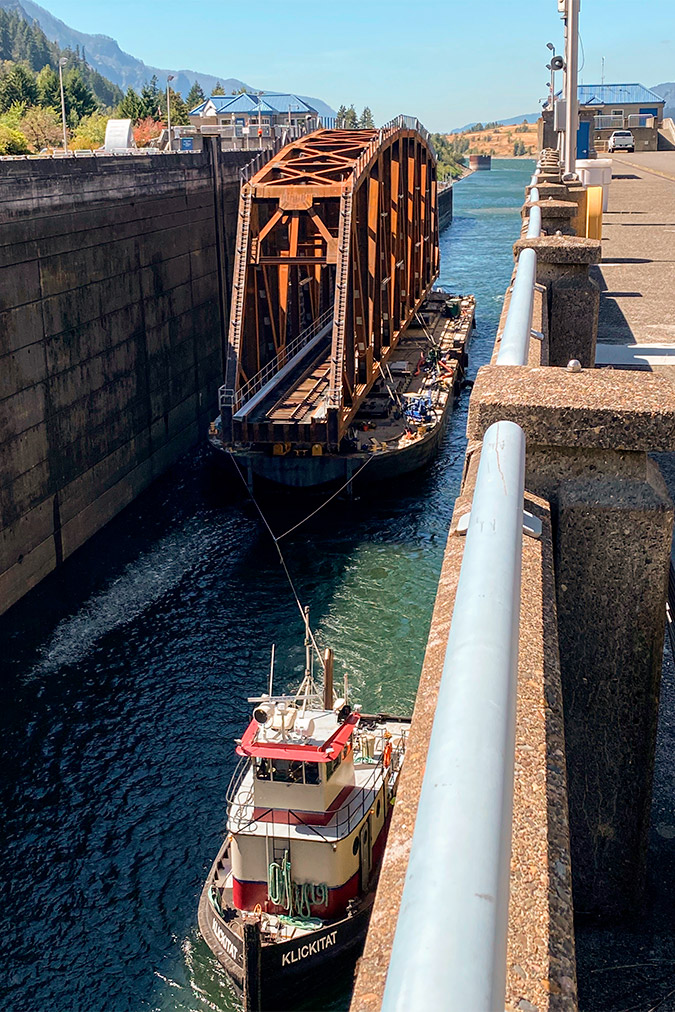 Halfway through its trip, the bridge traveled through the Bonneville Lock. 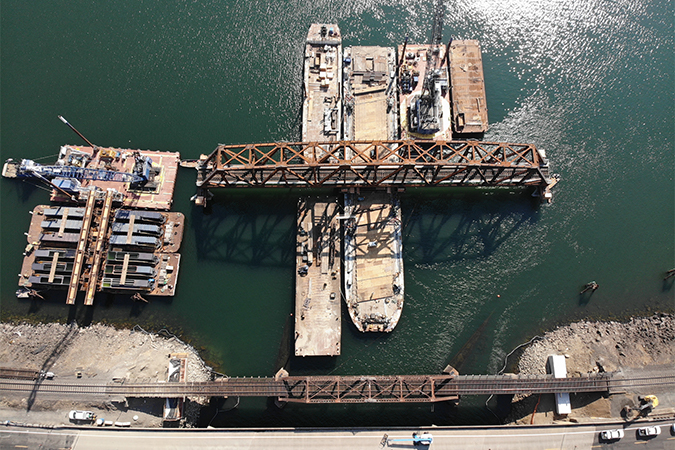 After its arrival at Drano Lake, the new truss – longer than the old one – was set on temporary supports parallel and south of the existing bridge. The barge was then backed out and reconfigured perpendicular to the old truss. 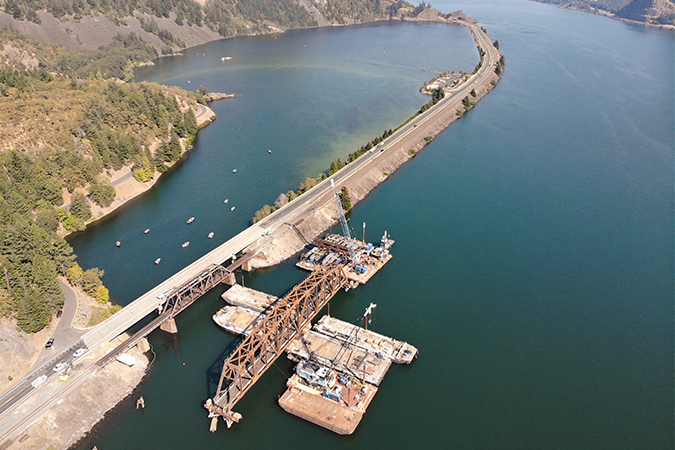 Once the barge was repositioned, crews built four supports in the center, then pumped water from the barge to lift the truss to the appropriate height. The rail line was shut down for the next 36 hours to detach the old truss and move it onto another barge in the river. Once it was out of the way, the other barge pulled into the channel, moving the new truss into place, then lowering it onto pre-built foundations. 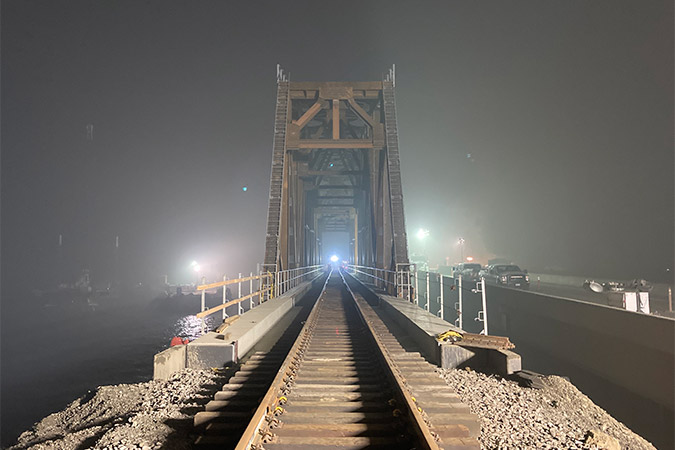 With the new span in position, crews installed two prefabricated 50-foot approach spans, one on each side. New track panels were laid across the deck, and the new bridge was open for operation. 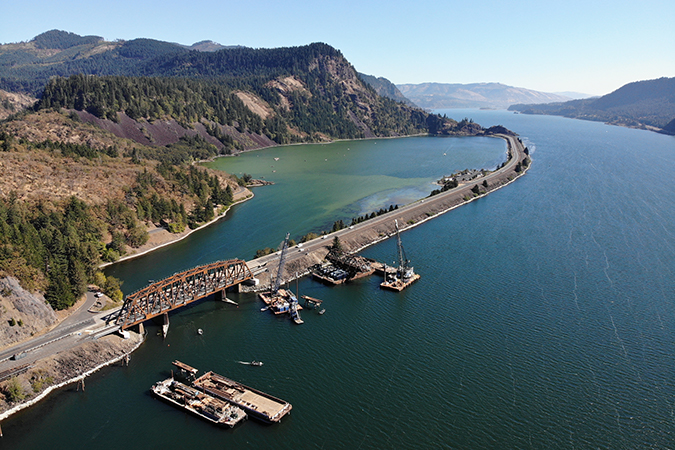 An aerial view of the new span, which will provide a wider waterway opening once the foundation of the old structure is removed. The new bridge also features increased clearances, higher weight limits and the new piers on the land allow for easier access for inspection and maintenance.

The truss replacement was also a source of entertainment, even in this remote location. “There were fishing boats everywhere checking out our progress,” said Herzog. He credits many for the success of the project, specifically Project Engineer Luke Sykora and Assistant Director Structural Engineering Alan Bloomquist, adding: “They brought the project from drawing board to reality.”