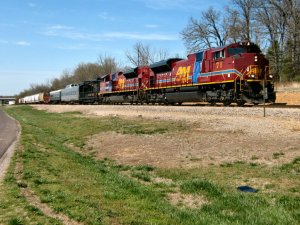 Caught the Arkansas & Missouri in town on 4/16/14 and noticed passenger cars in the train. I spoke with a crewman and he advised that company officials were on board along with customers, etc. They were doing an inspection and picking up freight from BNSF. The photo was taken on the A&M at Monett, MO. I thought it would make an interesting photo with SD70ACE's and passenger cars. Sorry the photo wasn't better, but I had to use my work camera and it's not the best.
Last edited by a moderator: Apr 21, 2014

Good shots. I always enjoyed photos of the A&M's ALCOs back in the 80's. I don't suppose any of them are around any more.
K

It's my understanding that most, or all of the Alcos are still in service. I did on one occasion see an Alco operating on the Monett Turn with two of the SD70ACE's. Unfortunately I didn't have a camera to grab a photo. I've been told that the Alcos are doing switching chores and handling local jobs while the SD70ACE's are handling the heavy mainline hauling chores.
B

It looks like A&M is still supporting the "minority builder", though it seems strange to think of EMD in that fashion. Where GE has sold thousands, EMD has sold hundreds. The ACes look good in that paint, though I think it looks a little "busy", and will probably get simplified whenever they require repainting.

What is the car between the locomotives and passenger car? Looks like a flatcar with short 'roof' sections.

The car appears to be a flat car with seating installed and some the short roof sections you mentioned. It looks like open air car that would be used on tourist oriented lines. I'm not too familiar with A&M's tourist train operations, but suspect that the car is used in that operation most of the time. I thought perhaps it was included on this train in case the railroad officials or their guests wanted to enjoy the weather or get a better view of the A&M's operations.