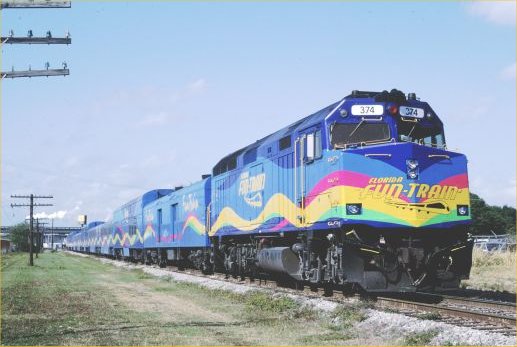 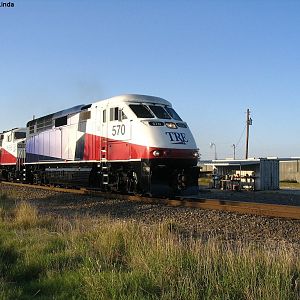 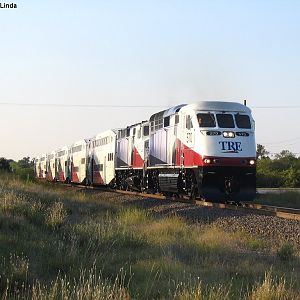 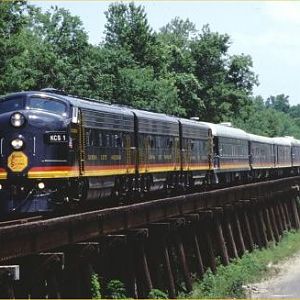 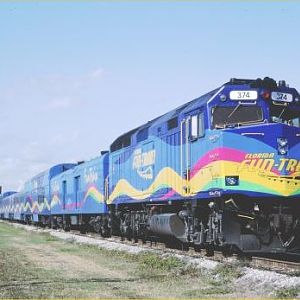 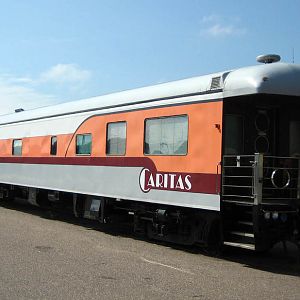 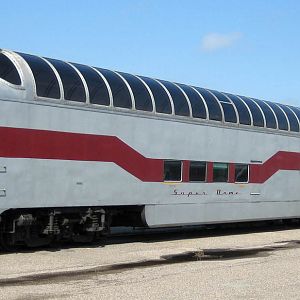 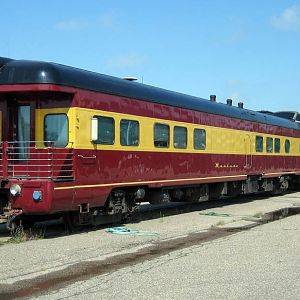 That odball rolling stock alone should make it fun. What is this, a commuter? It's an 8 for bluriness, but the subject makes it a 9.
Tell us a little bit about the Florida Fun Train.
Florida Fun Train
The short lived Florida Fun-Train began operations in October 1997, owned by First American Railways, Inc. of Hollywood FL. Their roll-out was held Oct. 15, 1997. It took the press and invited guests on a four-hour, 200-mile journey via CSX tracks between Fort Lauderdale and Orlando, FL.

FFT billed itself as an entertainment, tourism and transportation entity that included play areas for children and adults. Each single level glass topped &quot;dome&quot; car could seat 76 passengers. The bi-level cars featured a two-level Space Shuttle play area (Kidz Zone), virtual reality games, a video arcade, and strolling entertainers. Guests could enjoy full meal service or visit the 50's Diner, the Tropical Bar &amp; Grill, or the Wine Bar and Pub. Other activities offered were a disc jockey and live music, a dance floor and an expresso bar.

Rader Railcar built the glass-domed &quot;guests cars&quot; and double-deck entertainment cars at its Denver plant (closed &amp; auctioned off in Nov. 1997). Rader's relocation to Fort Lupton, CO, and renaming as Colorado Railcar Manufacturing was due in part to First American Railways (FFT) defaulting on its car payments, though FFT likewise claimed their bankruptcy was caused by delayed delivery of the cars by Rader. Rader's &quot;demise&quot; may have also been partially caused by the aborted &quot;Philip Morris&quot; train, which was cancelled before the cars were completed by Rader. Other successful ventures by Rader were the &quot;joint venture&quot; with Dan Steele &amp; Associates in Tillamook OR that rebuilt the original ex Milwaukee Road full length domes for Tour Alaska &quot;Midnight Sun Express&quot; service, the &quot;Ultra Domes&quot; for Princess Tours built from ex SP &quot;Gallery Cars&quot;, and the &quot;Goldleaf Service&quot; domes on Rocky Mountain Railtours.

The Florida Fun-Train cars were sold to the Alaska Railroad, and were returned to the builder in September 1999 to be painted and modifed. The cars were shipped to Alaska Railroad for passenger service on the Anchorage to Fairbanks run in June 2000.

Additional low-level glasstop cars were later built for BCR. They were subsequently sold to VIA Rail for use on the &quot;Skeena&quot;

Generally speaking, rail transportation is frowned upon in Florida. Not only by the residents, but by the state government as well. Witness the recent high-speed rail debacle...
That is one very colorful locomotive. Awesome shot.
Very colorful train. I would've liked getting shots of this train before its demise