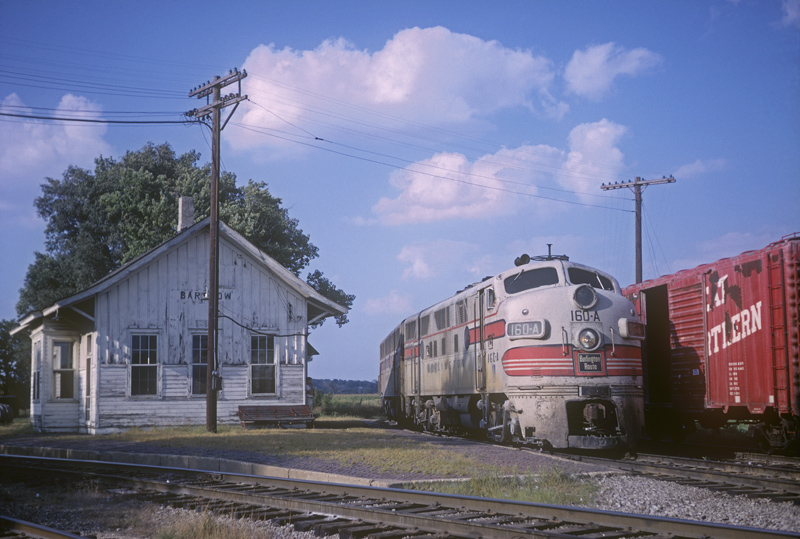 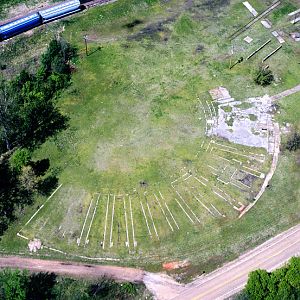 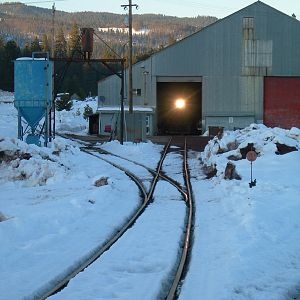 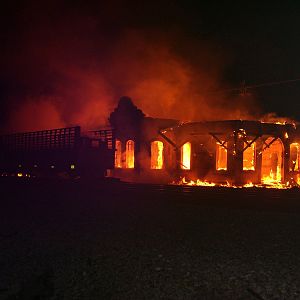 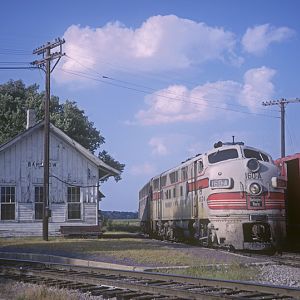 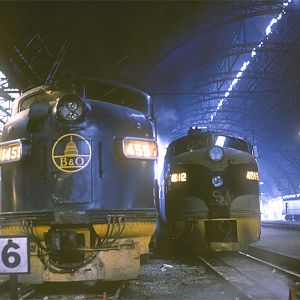 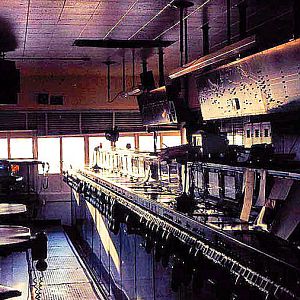 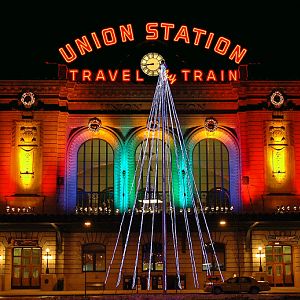 My friend, Chris Burritt, passed away this week (January 7, 2008), and I started looking at photos I have that may have him in them. And they bring back memories. He is pictured here in the shadows of the depot, performing the roll-by inspection of the train, as required by his job. This train movement was called a saw-by. Train #88 fit into the siding, but the other train ( with the Great Northern car) did not. So #88 pulled into the siding short of the switch at the other end. The other train then pulled forward behind #88 and continued, dragging its rear end clear of #88. Here is another story to go with this photo.

Folks who know Chris probably know him for his film work, but he also held a job on the CB&amp;Q railroad in the summer of 1966. I tagged along as Chris worked at Galva, Barstow, and Moline, Illinois as a relief telegraph operator, substituting for the regular operators as they took their vacation time off. We would sit in the station at Galva, Chris would be in communication with the train dispatcher, and would write train orders and hand them up to passing trains using a hoop. The trains didnt stop, and it was Chriss duty to stand close to the tracks and hold the hoop in such a fashion that a crew member could reach out of the passing train and grab the orders. This would happen twice per train, the locomotive crew and the conductor behind would both need to grab orders, so Chris had to throw the first hoop aside after the first set of orders were picked up and get the second hoop into position. This produced a lot of excitement in a short period of time, usually followed by a few hours of utter boredom as nothing happened until the next train passed.

One of the interesting things we did to pass the time was to make wagers as to when the next milk can would explode. Local farmers would bring their milk to the station in Galva in those large cans that are now collectible antiques. If the farmer was late and missed the train, the cans would sit out in the sun most of the day. On a really hot day, the top would blow off the can from the pressure of heated milk, and the station and platform would be covered in some of the foulest smelling substance we ever experienced. It certainly wasnt milk when it erupted from the can. Just to survive, we hosed the mess down with water.

When Chris was assigned to Galva, we would dine at the local diner. There we met two young women, and struck up an acquaintance. Although we were both 18 at the time, neither of us knew what to do next. Chris was more worldly, since he went to a co-ed high school. But I was (at the time) in prep school, studying to be a Benedictine Monk. That didn't pan out, but I didn't know it at the time. In fact, the few weeks spent with Chris on the railroad that summer probably changed the course of my life.

Here's a link to a closeup of Chris in this image:

Click to expand...
Thanks for sharing a great story with a great photograph
Thanks for sharing a great memory Chuck. I grew up next to the now abandoned
CB&amp;Q Brookfield to St. Joesph, MO line and have many memories of red and white F-units, black geeps, and Chinese red geeps and U-boats. If only I'd had a camera back then! Long live the Q!
Great photo of simpler times, Chuck. Nice story about your friend. Sorry to hear of his passing.
Excellent.......
Interesting story with your picture.
Great story....Great photo!!!!
I can only agree, heartily, with the previous posts.
A wonderful shared memory and a excellent shot. I grew up in California near the SP Bayshore Rail Yard. My grandpa loved to &quot;train watch&quot; and would take me down there with him. I am actually old enough... and saw steam still hauling freight as a boy. I enjoy local anecdotal rail history. Thanks!