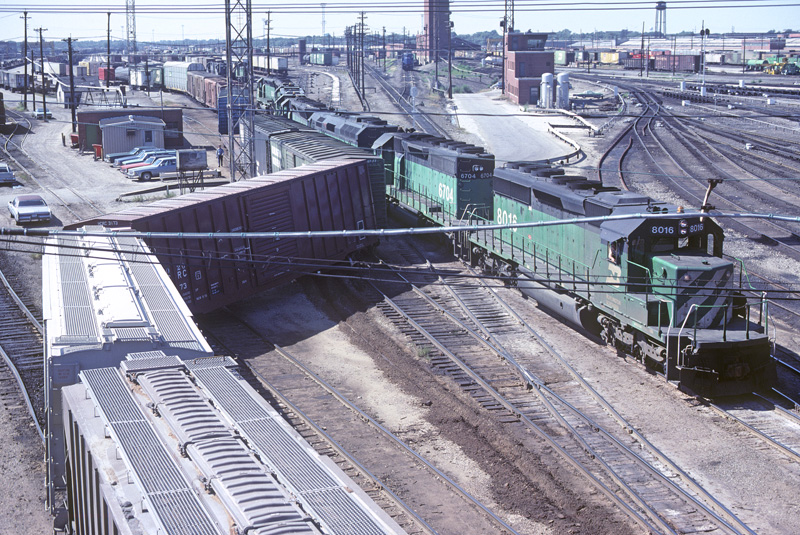 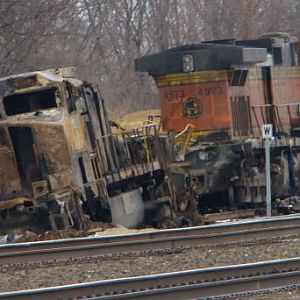 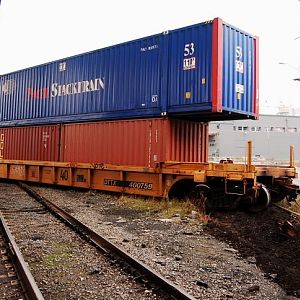 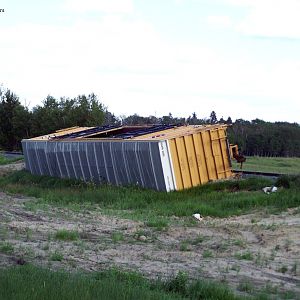 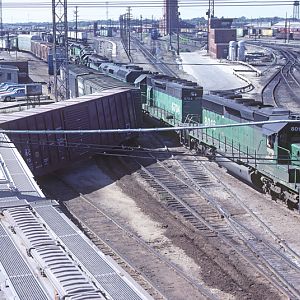 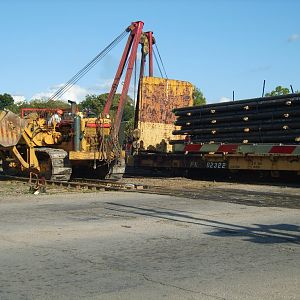 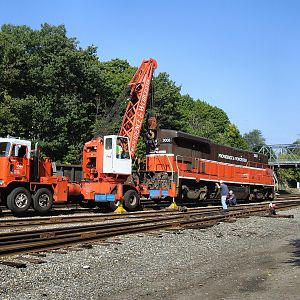 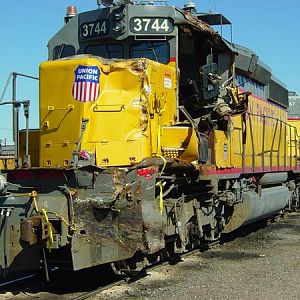 Number 8016 is seen here at Cicero backing west toward the engine house at Clyde, about a mile in the distance. Roughly a half hour before this photo was taken, this locomotive set was coupled to the now derailed freight train that pulled through the arrival tracks, and the following is my best guess as to the events that transpired next.

The train was too long for the track he arrived on, or he overran his stopping point. Either way, the train was parted, and he pulled ahead, a switch was thrown behind, and he proceeded to back the front half of his train into an empty arrival train adjacent to the one he arrived on. Now I'm no professional railroader, but I've seen many a backup move in my time, and in my opinion, the hogger showed a bit of &quot;enthusiasm&quot; in his reverse move. That, coupled with the bad condition of the yard tracks, probably contributed to the scene you see here.

I had just walked over from the north side to the south side of the Laramie Avenue bridge as the reverse move began, complaining to myself that I should have started shooting on this side instead of the other side, where the passenger triple track main was located. As I arrived on this side (the south side), the bridge began to shake, not too alarming as heavy trucks crossing the bridge would also cause the bridge to shake. But there was considerable noise very unlike a heavy truck, and I soon found myself witnessing a derailment happening literally under my feet. My impulse was to run off the bridge, there was the possibility of errant freight cars hitting the bridge support, and I would have joined in the derailment. Just as I got my feet into Run 8, there was the PSSSHHH sound of the emergency brakes setting up, and everything came to a halt in a cloud of dust. Behind me, I heard the turbos settling down to idle. I'm not sure if the hogger set the brakes or if an air hose parted, but I do recall the turbo sound still whining in a power setting after everything came to a stop, then winding down.

The hogger is inspecting his handiwork as he backs his power to the engine house, and he's likely putting his story together. Note that his class lights are lit, that's a nice touch. Almost part of this derailment was the lighting tower behind the boxcar that picked the switch, and a yard office, so it could have been worse.

Note the Conrail units parked in the pocket track next to the tower in the upper center of the photo. Also, in the upper right side is a yard track that has been taken out of service, apparently for some time, as the frog has been removed. This was a yard track off the hump at Cicero, and usually, the cabooses were routed to this track when an arriving train was humped and sorted. I got a couple of interesting photos of cabooses on this track.

Here's a link to approximately the same view but on the ground, showing the condition of the track a year earlier and the bridge support I was concerned about. I believe the switch that got picked is the third one back on the left, the one that passes under the train in the link below.

Click to expand...
Nice capture of a moment in time and the story to go with it!