Who Did Allison Manufacturing Company Make Rail Cars For? 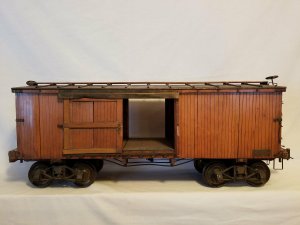 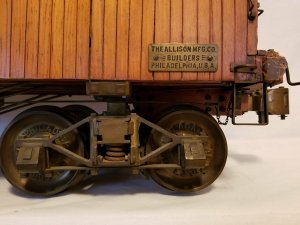 Thanks, Bruce. I have read that, several times. I have done the google thing. With the limited information that is available about this company, I am hoping there are photos that someone has seen, showing the builder's plate on a railcar somewhere, or maybe even a publication that is not on the www. Thank you!
B

I get a bunch of hits searching Google Books for the time period they functioned, using the various name combinations. But I didn't spend time reading.

According to an article in the Alexandria (VA) Gazette, dated October 30, 1900, the Robert Portner Brewing Company had contracted with Allison to built ten new refrigerator cars for the brewery, as well as repair the older ones currently in use. The MidContinent website said the company got out of railroad car manufacturing before the turn of the century, but clearly this is not the case. John, can I ask where you found those images of the model car??

Alexandria Gazette, Tuesday, October 30, 1900, page 3, column 2
THE ROBERT PORTNER BREWING Co. have contracted with the Allison Manufacturing Co., of Philadelphia, to build ten new refrigerator cars and repair the old ones now in use. The Portner people state that it was originally their intention to erect a car shop and build and repair their own cars, but were compelled to abandon the project as they could not secure the consent of the adjoining property owners to the laying of the necessary side tracks.
You must log in or register to reply here.
Share:
Facebook Twitter Reddit Pinterest Tumblr WhatsApp Email Share Link