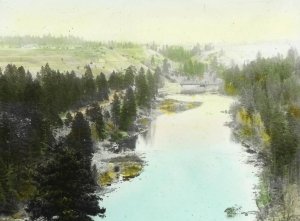 And trolley tracks opposite Fort Wright: 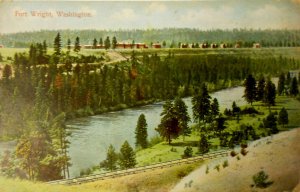 There is a nice aerial view of Spokane here. http://www.spokanegis.org/citymap2/default.htm?layers=30 The link will load with a regular map but if you look up in the top right hand corner you can click on "1958 Aerial". Then you can zoom in with pretty good detail to see all the railroad tracks from that year.
B 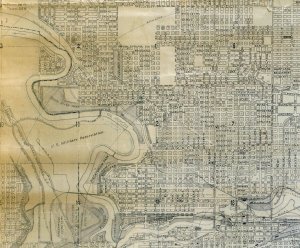 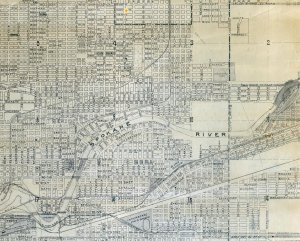 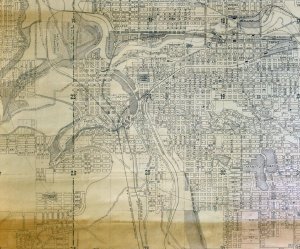 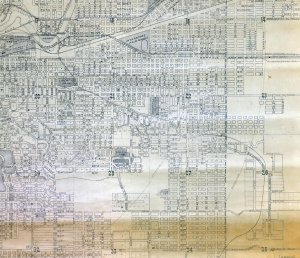 I have been able to gather some more information on the lines in NW Spokane.

The original railroad company that built from the north side of the river out to Fort Wright bridge and beyond
was the Seattle, Lake Shore & Eastern. The track continued from the end of track at Chestnut and Spofford in the
map in the previous post. As you head down Pettet Drive toward the Fort Wright bridge, note the "shelf" in the
hillside above. I believe this is the grade for the SLS&E. The grade continues after the gully of Meenach Drive for
maybe another hundred yards. At this point SLS&E built a bridge crossing the river. According to Lewty, Across the
Columbia Plain, "the bridge was 2000 feet long and as much as 150 feet high, consisting of two 156-foot,
Howe-truss spans and multiple tier-approach trestles." In the middle of the river at this point,
there is a small island, which I think is what remains of one of the bridge footings. (So I do not think that the bridge
in the postcard is the railroad bridge.)

The Great Northern used this line from 1892 to exit Spokane to the west. GN shared a depot with UP near Washington
Street. This depot burned down in 1902. It was about this time that GN finished its own station on Havermale Island
along with the massive steel bridge crossing of the river near Summit Boulevard.

According to my grandfather, the SLS&E trestle burned down quite spectacularly some time later, but I do not know the date.

Thanks Bruce and swcup! Great maps and information! I think swcup nailed it; that grade does look like it ends past TJ Meenach drive and would have spit the track out onto a trestle. Trying to determine now where that trestle might have ended on the other side...
S

Here is a link to a 1890's map that shows the route of the SLS&E after crossing the Spokane River.
I've actually located some of this grade on the southwest edge of the Finch Arboretum.
Later on, parts of this route were used for the Interurban to Medical Lake.

The photo in the post card is a walking bridge which led from "Nat" park to the Fort Wright College campus, and is still there. The Fort Wright r.r. bridge was southwest of there just below Summit Blvd., and a bike trail runs right up to the eastern abutment, which is also still there. Fort Wright Junction is right in the middle of Life Center Church on Government way. I grew up around all of these railroads, so if you need info from me I'd be glad to answer questions. Classicar.
S

I happened to run across a link that shows a picture of the SLS&E bridge across the Spokane River, as well as a map giving the location.


swcup said:
I happened to run across a link that shows a picture of the SLS&E bridge across the Spokane River, as well as a map giving the location.

I have looked for YEARS for photos of that line, which had to have been an extension of the old Boyd-Conlee industrial trackage that curved around Cannon park and ended at Newton Lumber Co., where the West Central Community center is now. Looking up on the embankment on Pettet Drive, you can still see the old grade, and also below the Fort Wright Campus, following the river on the opposite side, now a small part of the Centennial Trail. Thanx for this post! Classicar.
You must log in or register to reply here.
Share:
Facebook Twitter Reddit Pinterest Tumblr WhatsApp Email Share Link