This past weekend, I managed to actually get some time to take a road trip up to Reno. While it was not a rail fanning getaway, I did take some time away from the casinos to go take some pictures.

At Verdi Nevada, I found a nice spot along the Truckee river and the tracks to park for a while. I wasn't even there 20 minutes when an eastbound stack train came coasting down from Truckee and Donner Pass. 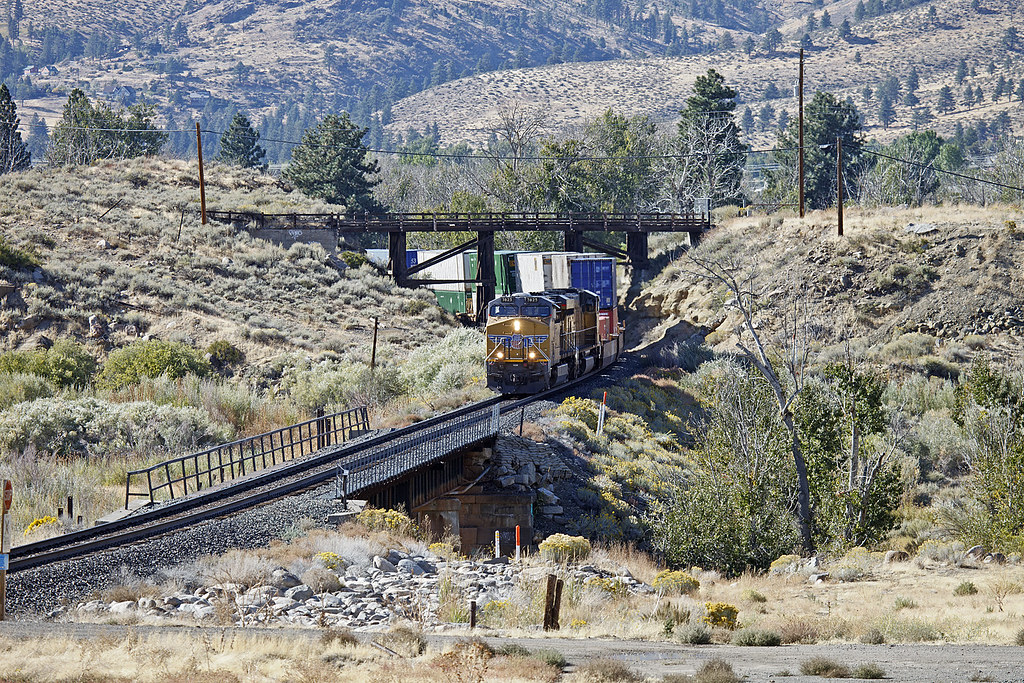 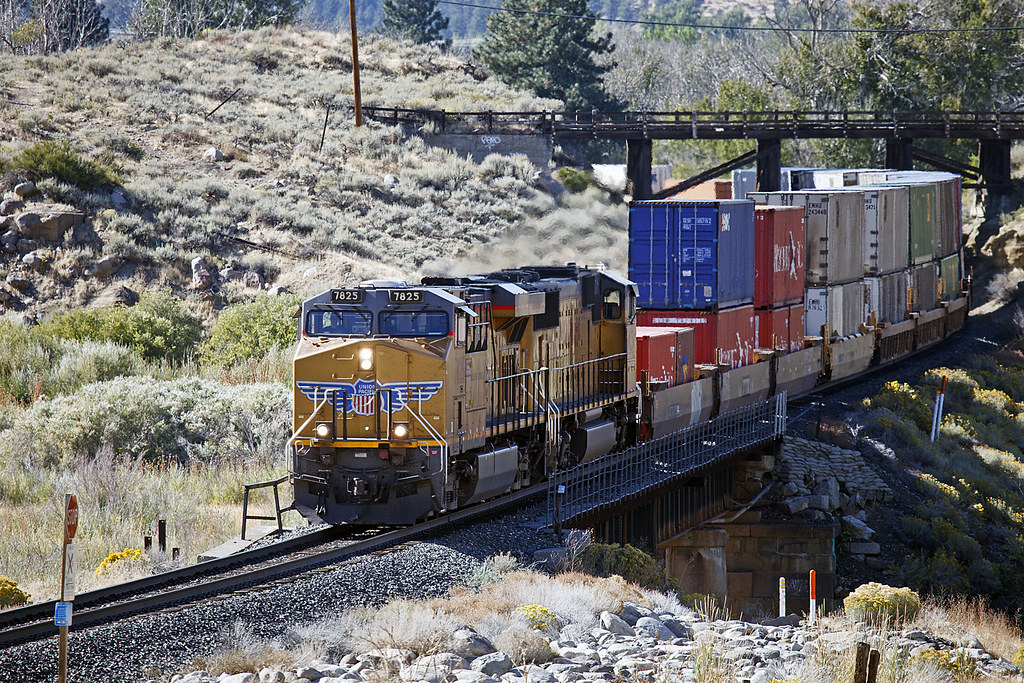 Had some DP in the middle... 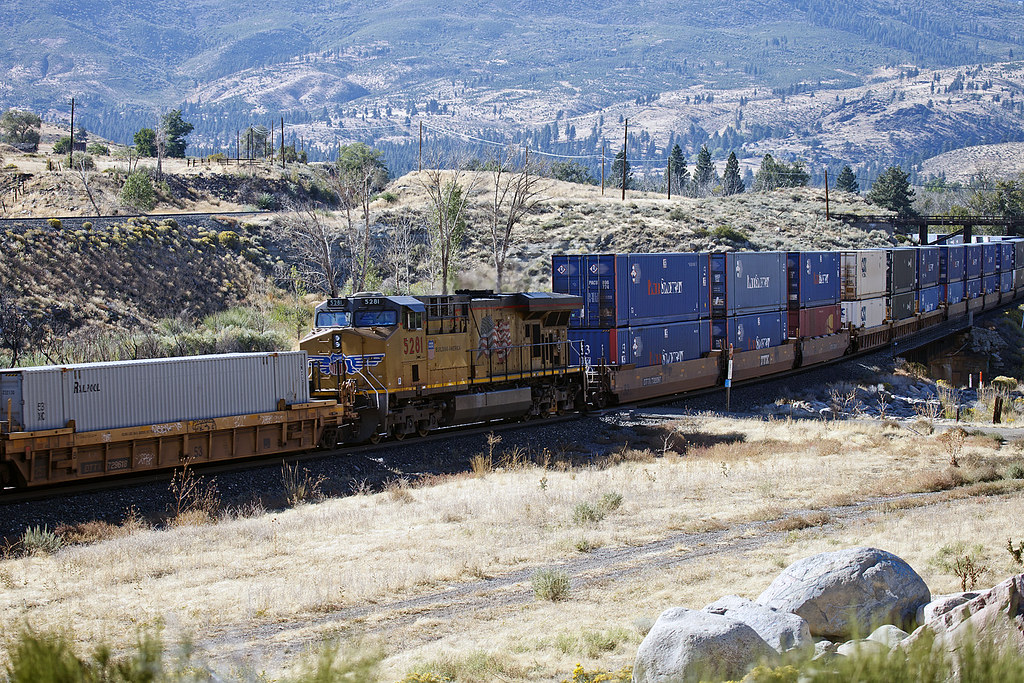 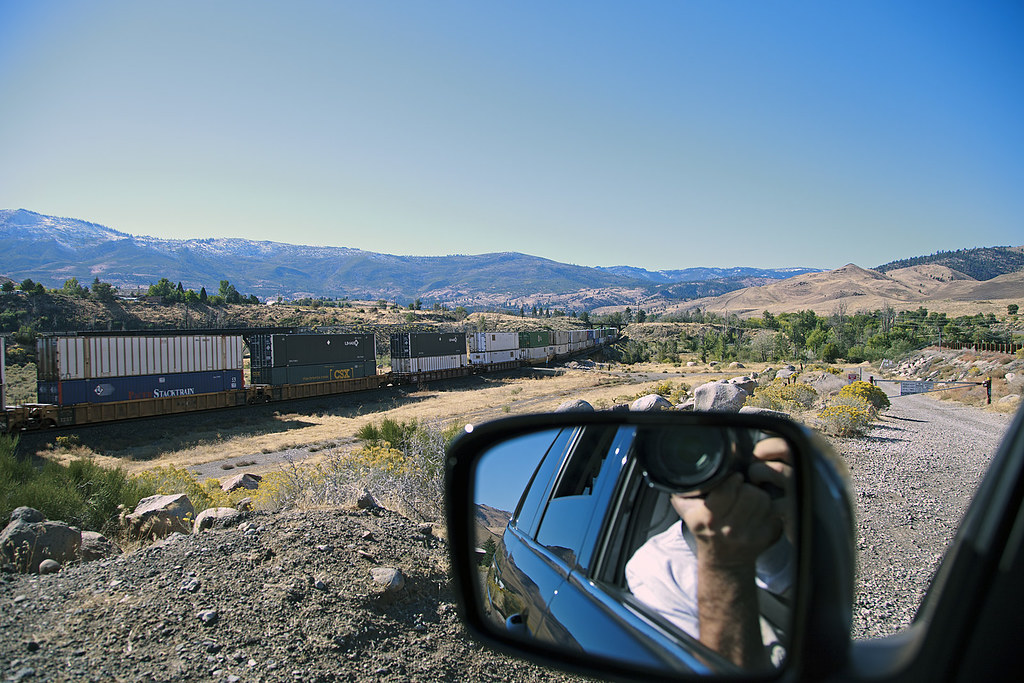 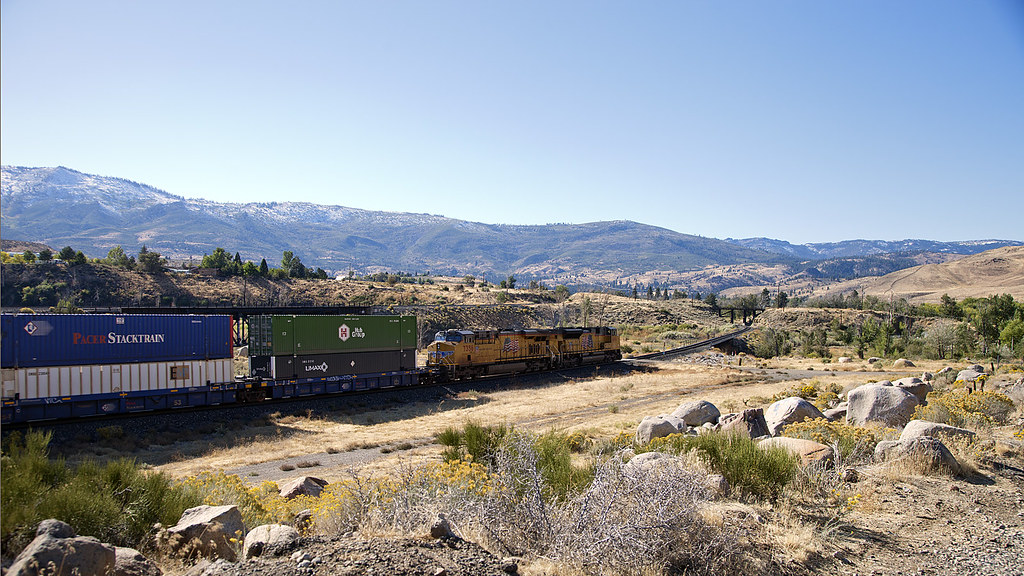 The following morning I ate breakfast at the same spot before I headed home and caught this big mixed freight headed west.

It takes a LOT of power to tackle Donner 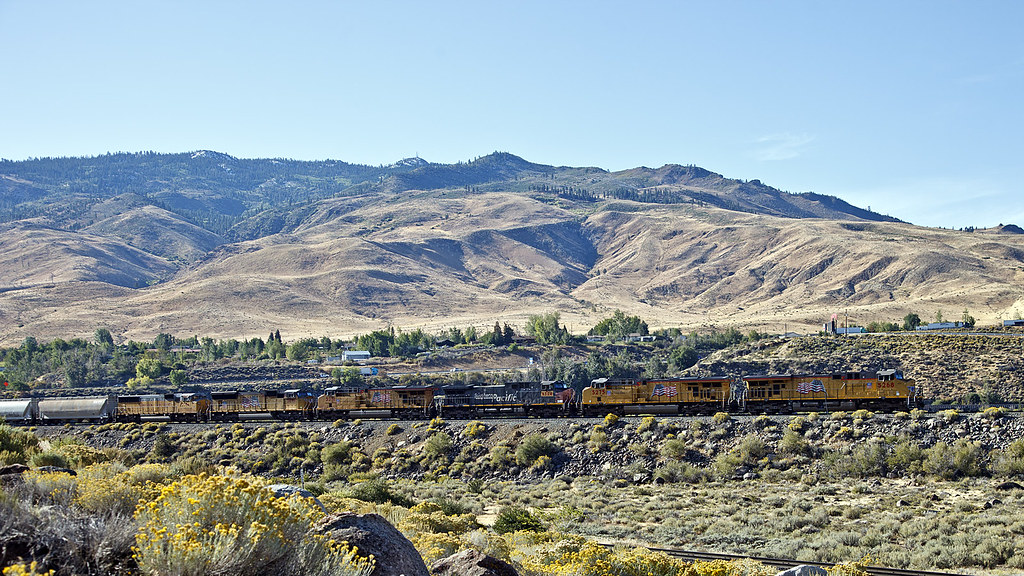 Just had the first dusting of snow a few days before my trip. That is the Boomtown casino in the background for those familiar with the area. 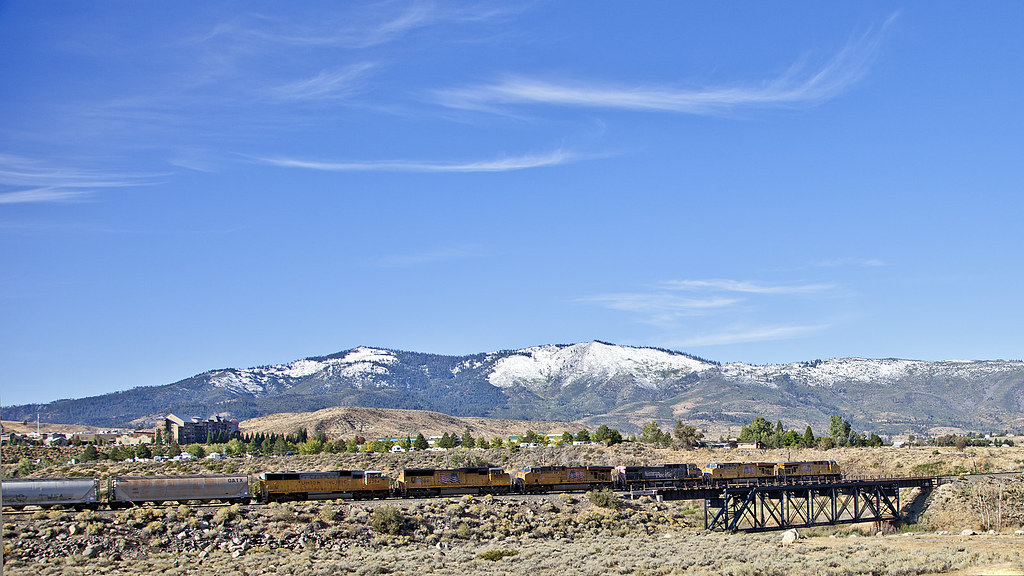 Nice to see an old Espee unit on Donner 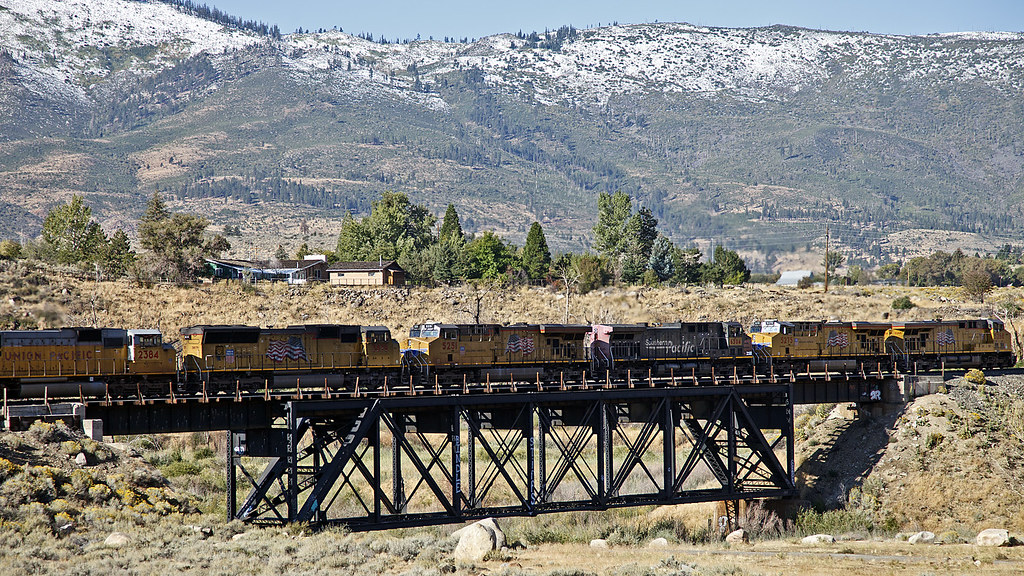 Lots of military cargo on the train 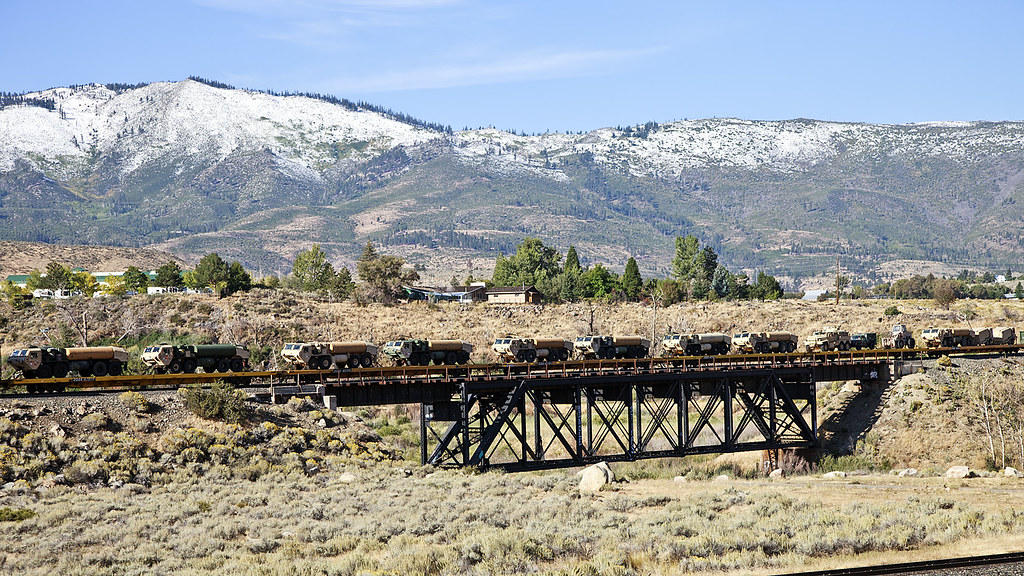 One on the back end 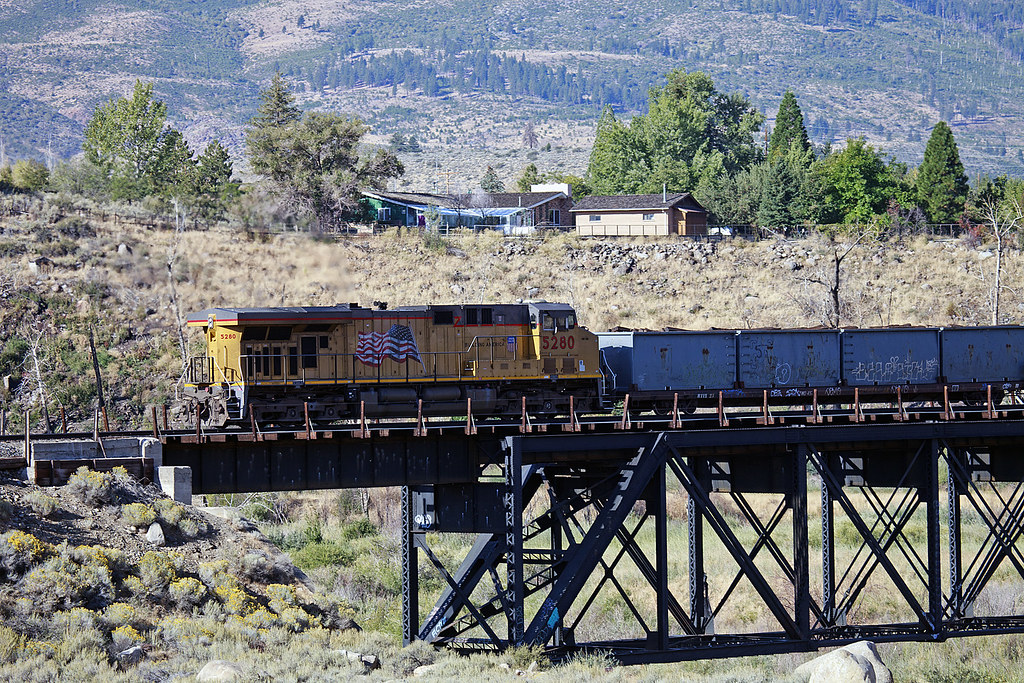 I decided since I was leaving to see if I could catch the train along the way. Traffic got me in Truckee, but on the other side of the pass I had more luck. I caught it at a grade crossing in Alta California.

You can see the dynamic breaks are getting a workout as the lead units struggle to keep the speed under control as the train heads down the steep grade. 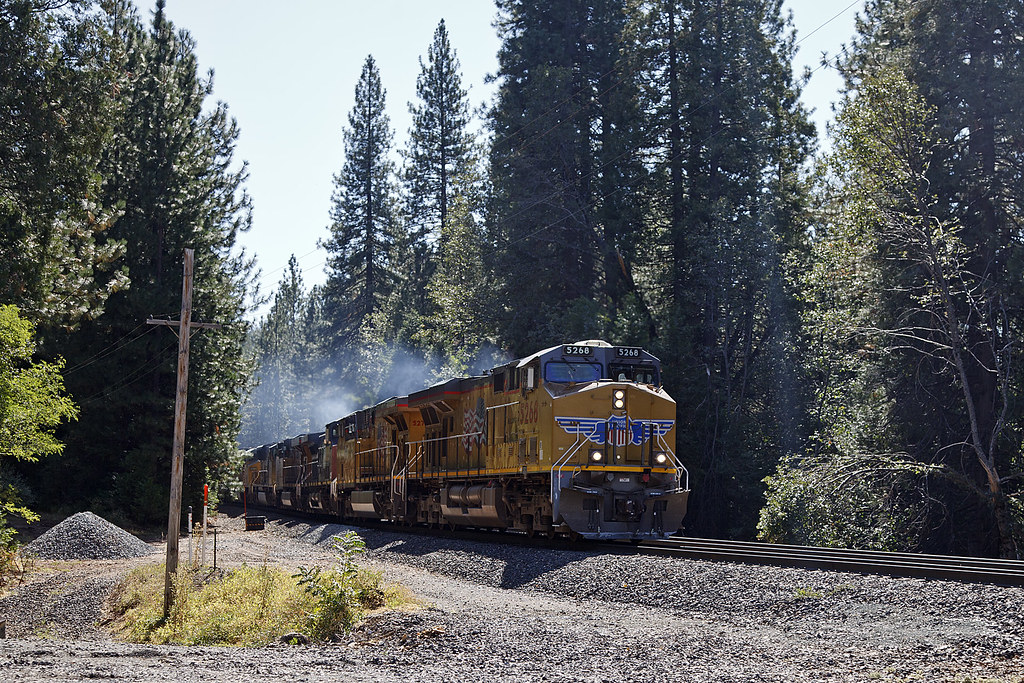 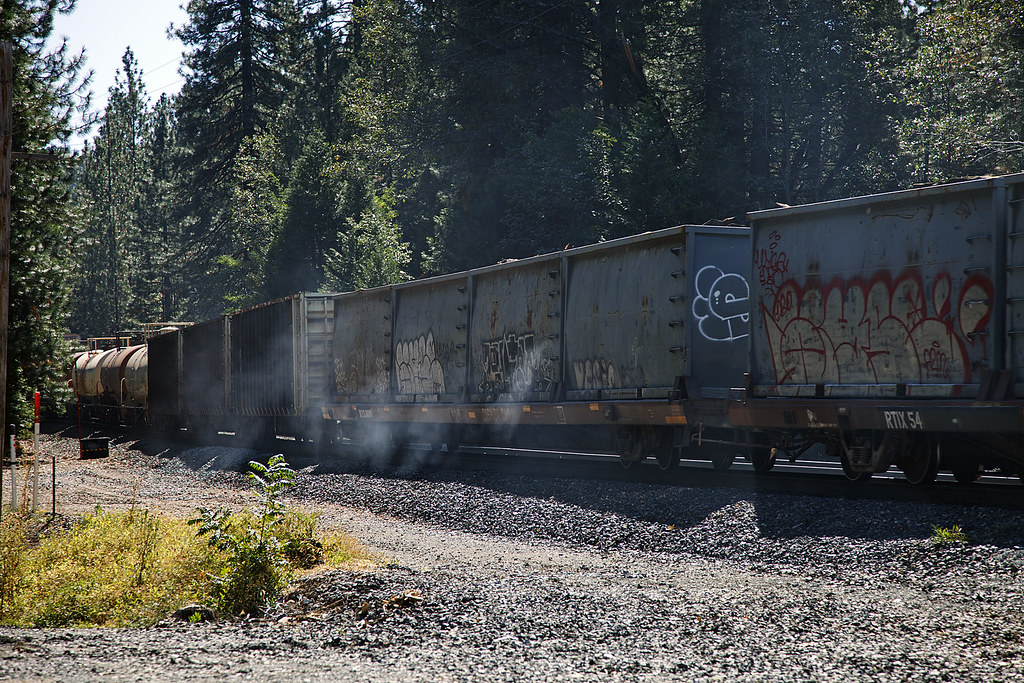 Another look at the military load. Each HEMMT truck weighs around 19 tons. We used to get 2 onto a C-17. 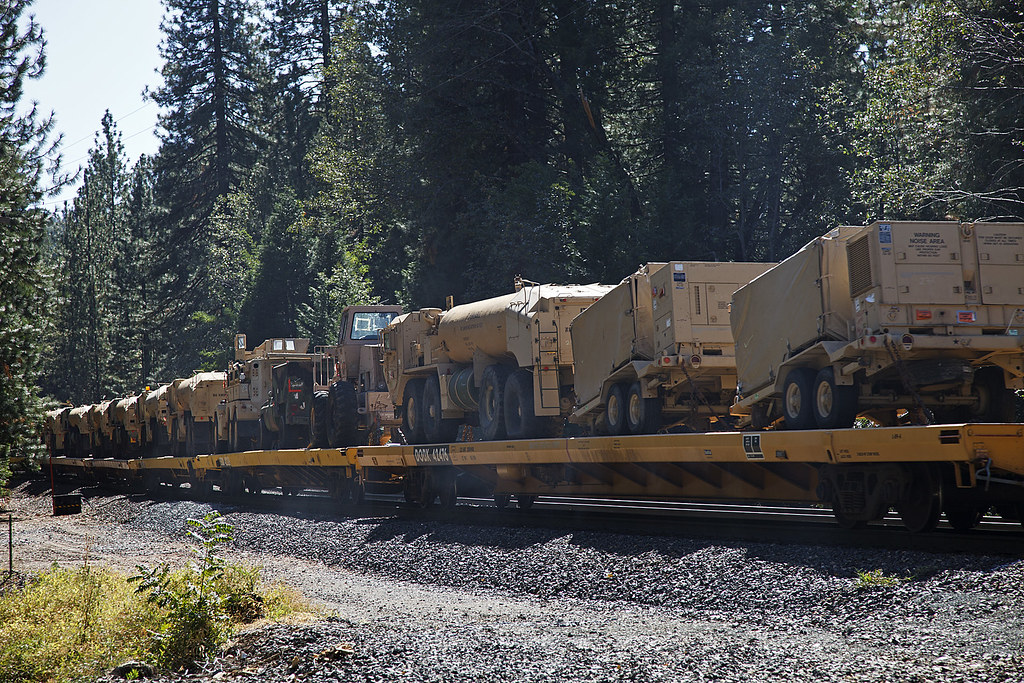 I raced ahead and caught it for the last time at the Amtrak depot at Colfax. 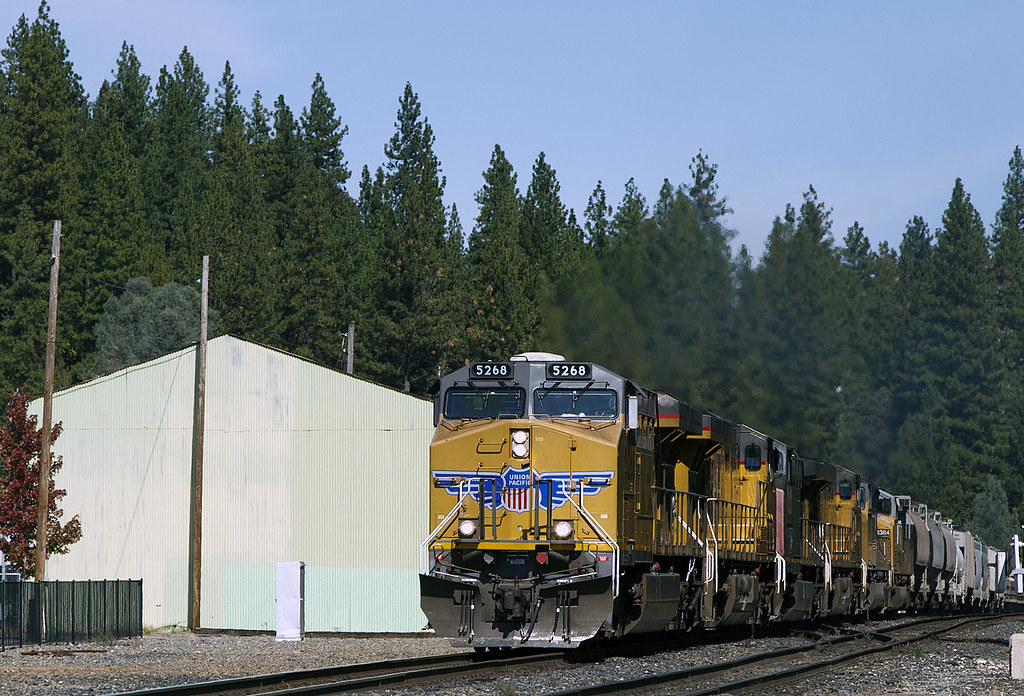 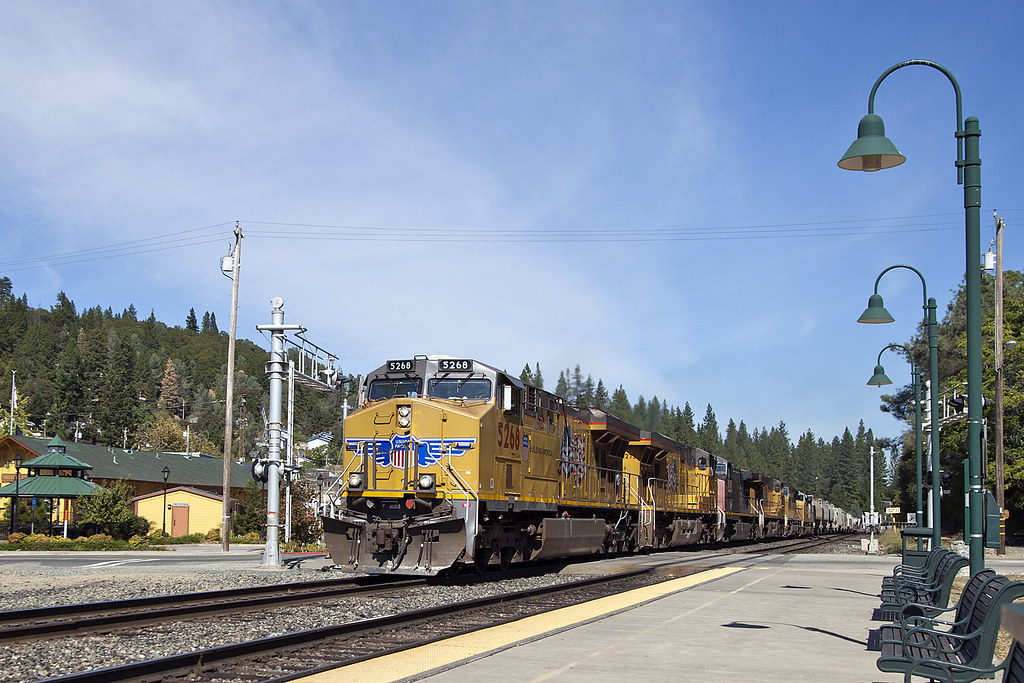 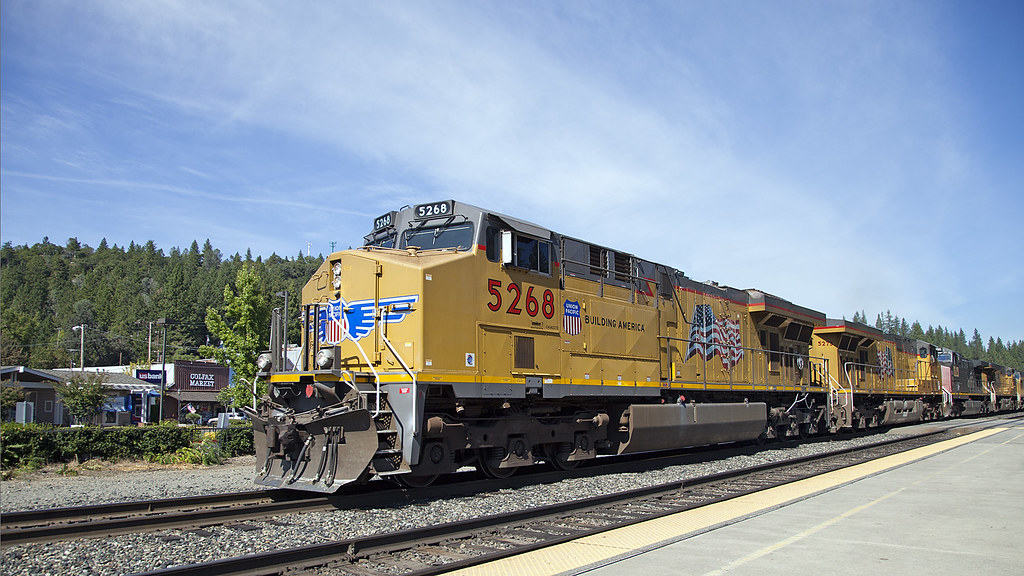 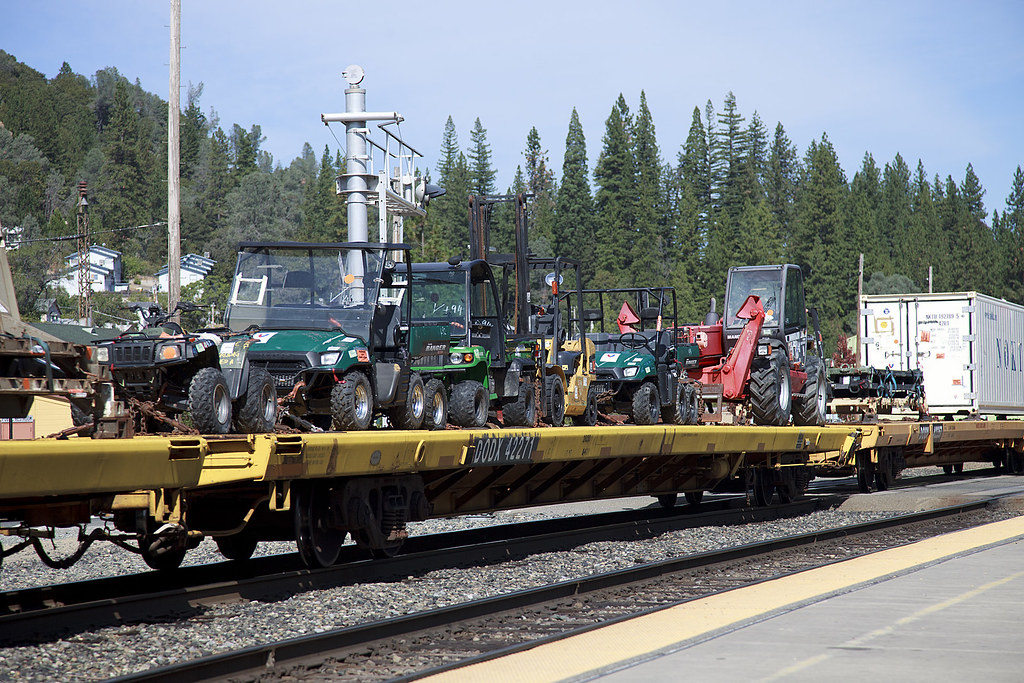 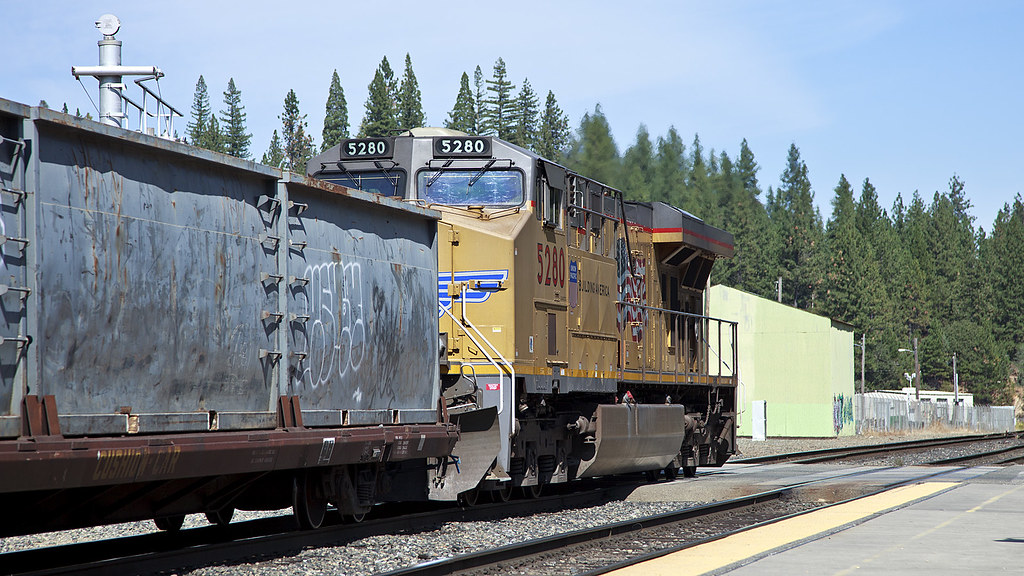 Next stop (for the train) Roseville. 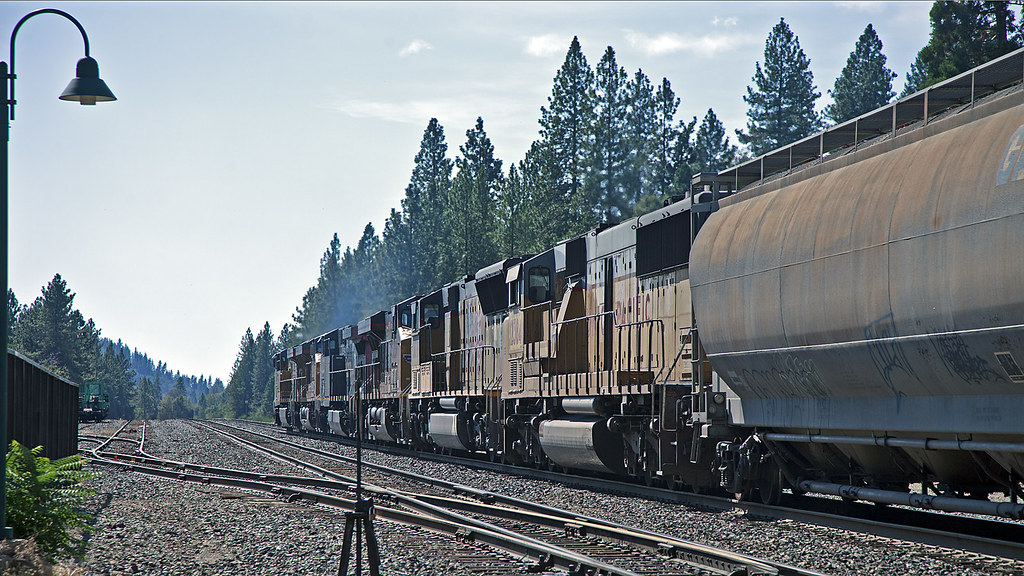 I thought that was it for the trains, but as I drove between Sacramento and Davis, I caught a container train on the causeway. I was doing over 70 and could not get ahead of this one. I shot this across my van's passenger seat out the open window without looking through the viewfinder. Not bad! 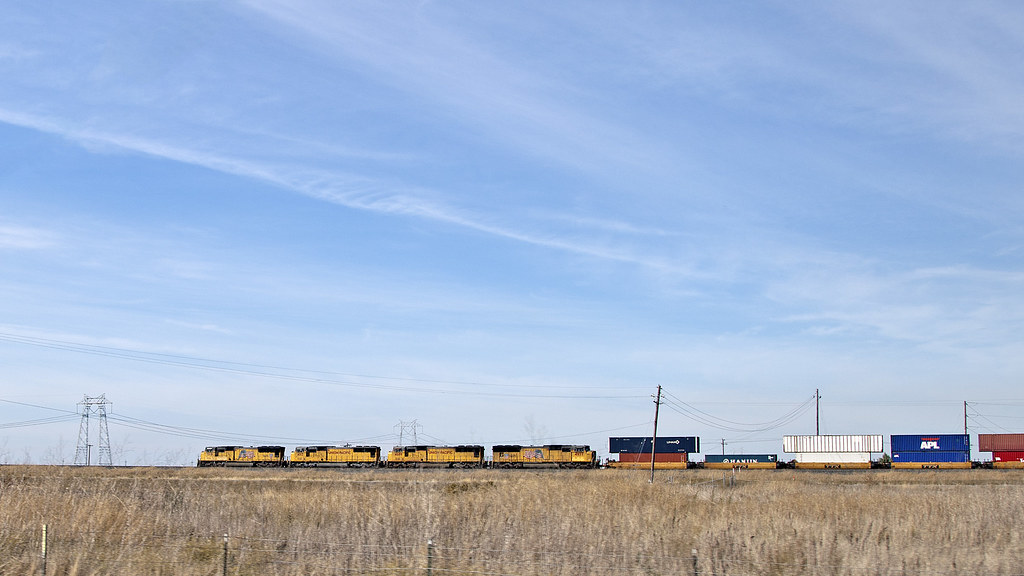 Sadly, it was time to head home and back to work

Have the 55xx series AC4400CTE's been bumped from the Sierra DPU pool? The shots on Donner didn't have the usual cinder blocks as helpers. I've also noticed 5556 and 5560 on coal trains here in NE and IA.

RailfanRails said:
Have the 55xx series AC4400CTE's been bumped from the Sierra DPU pool? The shots on Donner didn't have the usual cinder blocks as helpers. I've also noticed 5556 and 5560 on coal trains here in NE and IA.
Click to expand...

I couldn't tell you. I only get up that way a couple of times a year and this is the first time I actually went looking for trains. Someone who hangs out at the Roseville or Truckee end would know more than I would.
R

Itsed65 said:
I couldn't tell you. I only get up that way a couple of times a year and this is the first time I actually went looking for trains. Someone who hangs out at the Roseville or Truckee end would know more than I would.
Click to expand...


Thanks, I spoke to my son and he confirmed that they are using the 52xx series GEVOs as DPU's/Helpers now.

It’s nice to get a change of scenery to photograph trains and your post makes me want to hit the road, but….. this darn “food, shelter, clothing” thing keeps me working.

Good shots. I lived in Saceramento from 1973-84 and would railfan Donner Pass and the Yolo bypass causeway.

These views make me want to have a road trip!
B

I was there as well last weekend (in Truckee) and was amazed at the traffic levels over Donner, and consistently as well!

Your post wants me to take my trip to Reno in early November to be scheduled now!!!