The FRA rules "Finding of No Significant Impact" regarding the Point Defiance Bypass Project.

Shouldn't be too much of an upgrade for the remainding half or so of the Prairie line with the upgrade of CP Nisqually.
M

What about the southbound Coast Starlight? The steepness of the grade at the northern end of the bypass might be too much without helpers. Is that part of tthe plan or is it too early too think about it or will this train use the water level Pooint Definance route?
R

Mike G said:
What about the southbound Coast Starlight?
Click to expand...

The project website seems clear that all passenger trains will use the new bypass route.

When completed, the Point Defiance Rail Bypass project will bring a total of seven daily round trip passenger trains through Tacoma, Lakewood, and DuPont intersections, with an average crossing time of 45 seconds per intersection and a maximum speed of 79 mph.

If you follow from the project page to the Cascades schedule here:
http://www.amtrakcascades.com/Schedules.htm
you can see there are 7 daily round trips only when you include the Coast Starlight also shown on that schedule.

If Amtrak had one train remaining on the current route, it would also mean that they would have to maintain two Tacoma Amtrak stations, or else deal with an ugly backup move since the Freighthouse Square station will serve the Cascades. The current Amshack Tacoma station is further south from the point where southbound trains would divert to the new bypass.
E

Amshack Tacoma? While it certainly won't win any design awards, I wouldn't call it an Amshack. I know Amshacks, Amshacks have been on lines, and Tacoma, that's no Amshack.

All right, calling it an Amshack is a little harsh.

But it sure as heck isn't going to win any design awards. And in comparison to the nearby [former] Union Station, it does have a strong resemblance to an Amshack! 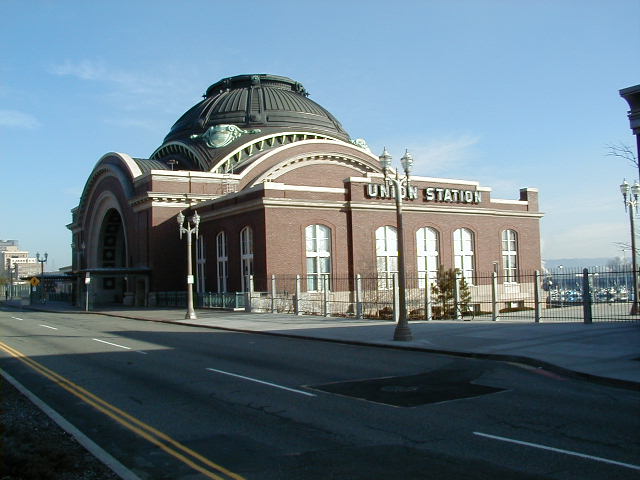 If you haven't been inside the refurbished Union Station, now a Federal Court House, this is an interesting site:
http://www.unionstationrotunda.org/default.html
S

This is a shack.

Rader Sidetrack said:
All right, calling it an Amshack is a little harsh.

But it sure as heck isn't going to win any design awards. And in comparison to the nearby [former] Union Station, it does have a strong resemblance to an Amshack!
Click to expand...

Marty, it runs on steam!

The 'city' of Lakewood will be filing suit against Amtrak trains going at speed through that area. There are a lot of large grade crossings over very busy streets through there, I can't imagine the Starlight roaring through there in run 7...
R

p51 said:
The 'city' of Lakewood will be filing suit against Amtrak trains going at speed through that area.
Click to expand...

Good luck with that plan! The Cities of Auburn and Kent, WA tried that some years ago to prevent increased BN activity over the rebuilt Stampede Pass line. And the effort by both Cities were completely shut down ...

Marty, it runs on steam!

Rader Sidetrack said:
Good luck with that plan! The Cities of Auburn and Kent, WA tried that some years ago to prevent increased BN activity over the rebuilt Stampede Pass line. And the effort by both Cities were completely shut down ...
http://www.stb.dot.gov/boundvolumes...3f8f5f6da80a9a05852569b30051c2d6/$FILE/33.pdf
Click to expand...

Yeah, you know how the NIMBYs are around here (and everywhere, for that matter). I must admit that an Amtrak train tearing across the entrance to North Fort Lewis as well as the Bridgeport Way grade crossing scares the heck out of me...
D

Presumably they'll have full-quadrant gates installed and other safeguards against drive-arounds to keep hasty people in too much of a hurry from committing suicide.

Pedestrian deaths, however, are going to spike. Oh, Darwin... How many miles of extra-security fencing is this going to take?

Probably not that much, and while pedestrian deaths will spike briefly, they'll also drop after a bit. We had much the same thing happen when the Rail Runner trains started running here a few years back, and some additional spikes when the operating schedules changed and as service was extended north and south. Eventually, people along the route will get used to the trains and the deaths will drop off. Besides, fencing won't keep the idiots and "suicide by train" types away; the problems Caltrain has had with the like is proof enough of that!
You must log in or register to reply here.
Share:
Facebook Twitter Reddit Pinterest Tumblr WhatsApp Email Share Link