Hope everyone is doing well, I went out yesterday and took advantage of the nice weather we had this weekend. Started the day by heading east on US90
to get a panorama shot of parked UP Maintenance Way Equipment between Knippa and Sabinal. Its pretty
neat how the MOW can make there own temporary siding to clear up faster. The gang is making making good
time on the Del Rio Sub heading west. New rail has already been placed between Hondo to Sabinal.

Next catch of the day was a eastbound manifest called out of Del Rio with the UP 7408 in the lead.
For the looks of this train it could be the Q-WCEW. High priority goods from West Colton, Ca to
Englewood, Tx. I was able to catch him in Knippa crossing the dry Frio River bridge but was able
to get a better shot of the rear DPU power. It had a UP SD90/43MAC sill numbered 8178 west pointer in
the DPU power. 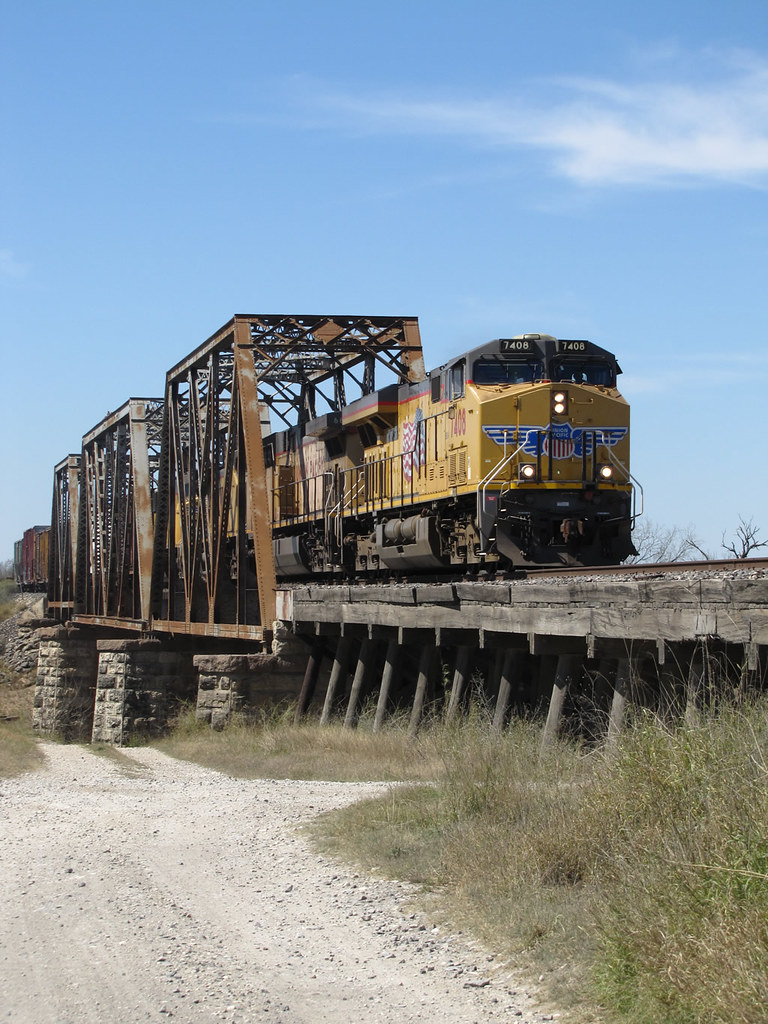 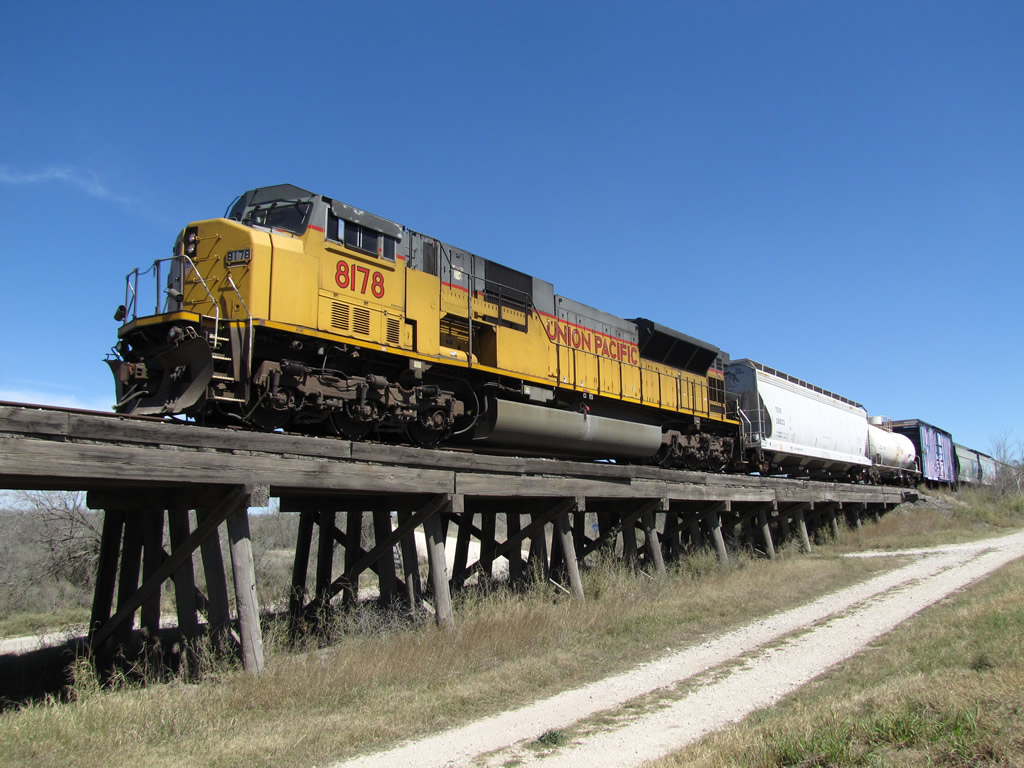 The third train of the day was the BNSF 1011 out of Eagle Pass. Short manifest with mainly all empties and
some brand new chemical tank cars towards the rear of the consist. Hats off to the engineer for giving me
two toots on the horn after passing my location. 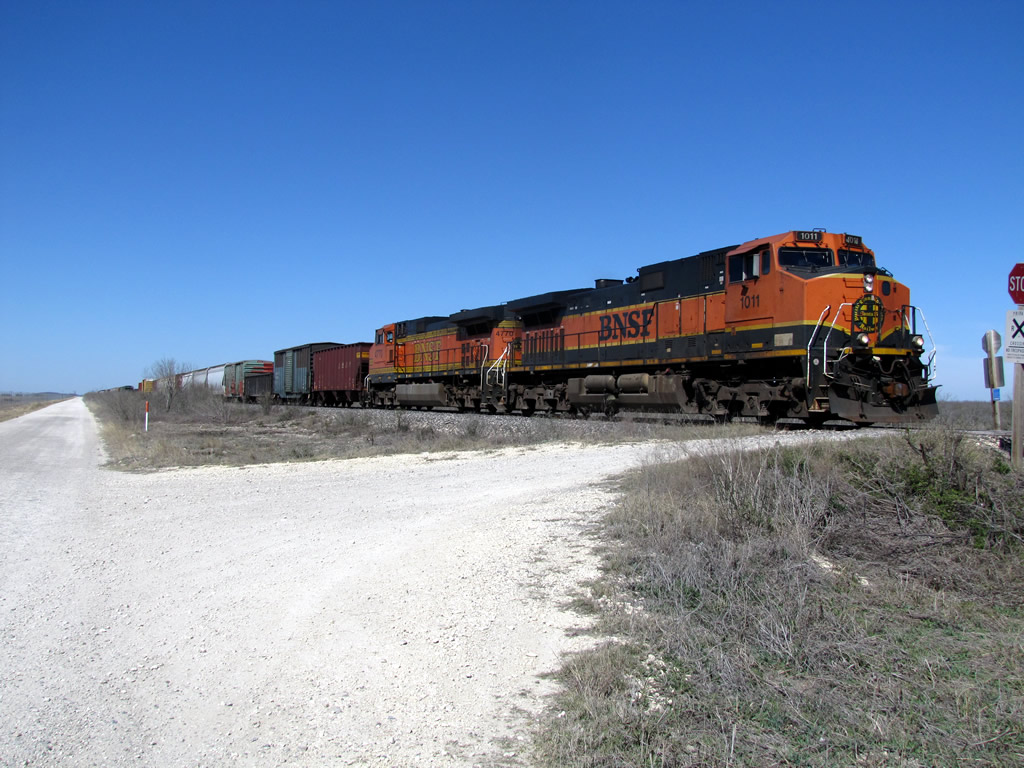 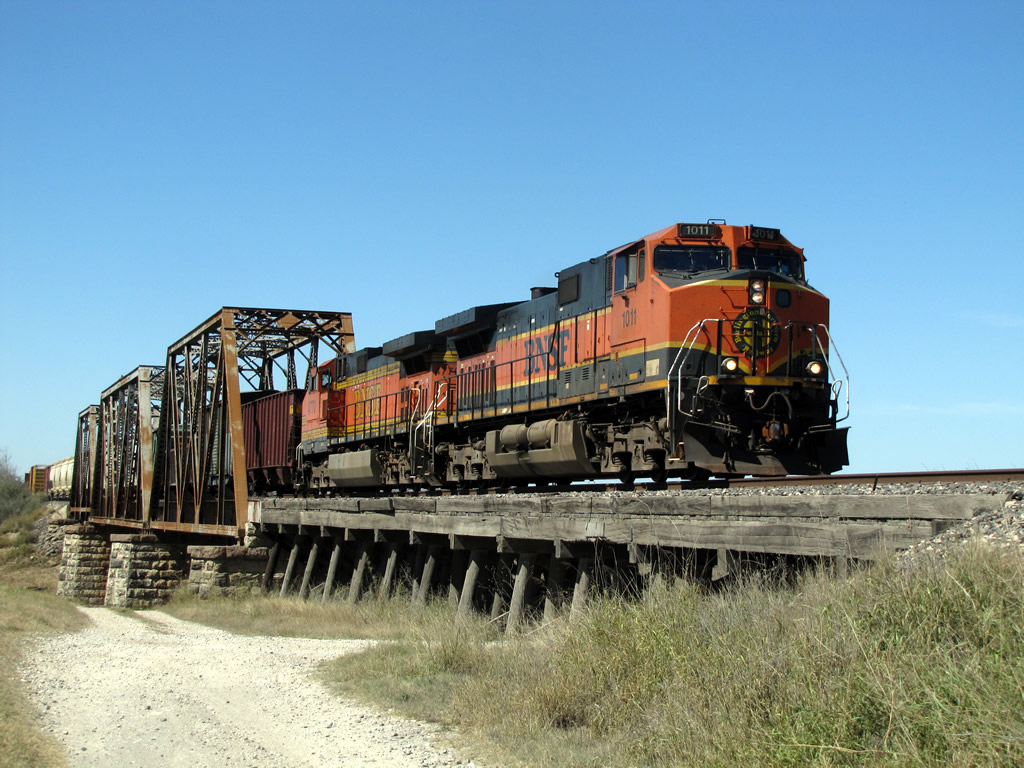 Before heading home for lunch I heard another eastbound passing the hotbox detector at mile 311.0 and
then I figured I had time to make out my new favorite spot before the train got there. I must have timed this
one just right as I got to the location I saw the head lights just passed the signal at m.p. 305. As the train was
approaching I noticed it was FXE power in the lead. 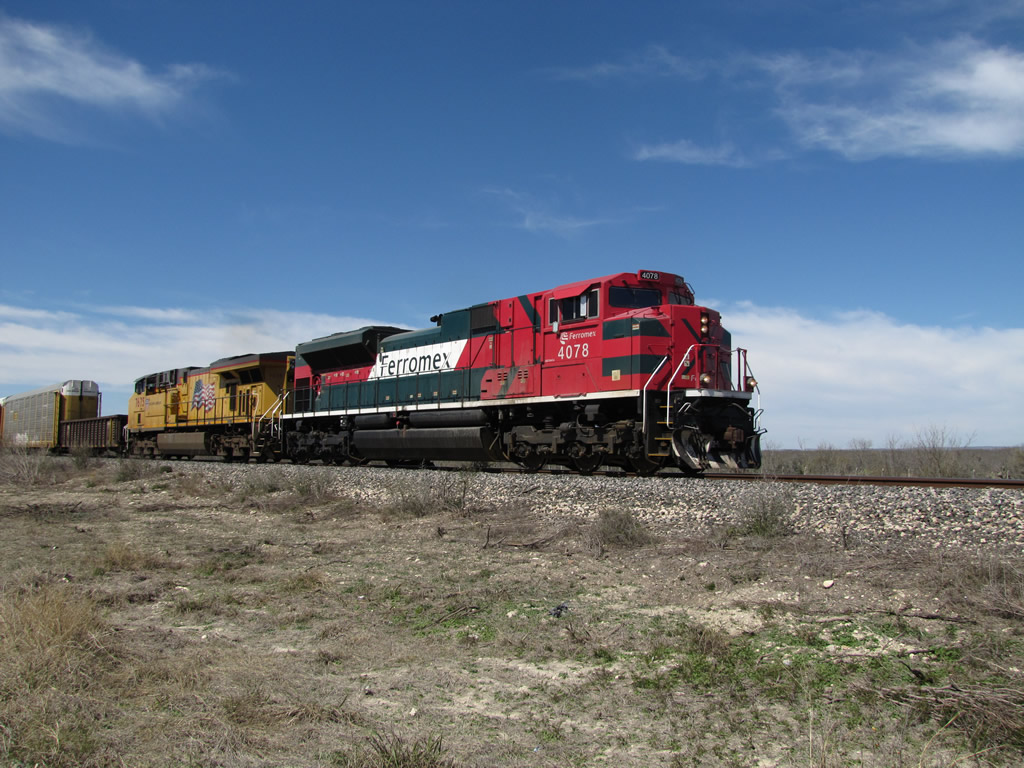 In the afternoon thanks to fellow rail fan friend from S.A. I got a heads up of a light power move he saw move
from East Yard to Sosan. From the sounds of things the power move was going back to Eagle Pass and Mexico.
The engine move had the the FXE 4045, FXE 4683, and two UP engines. 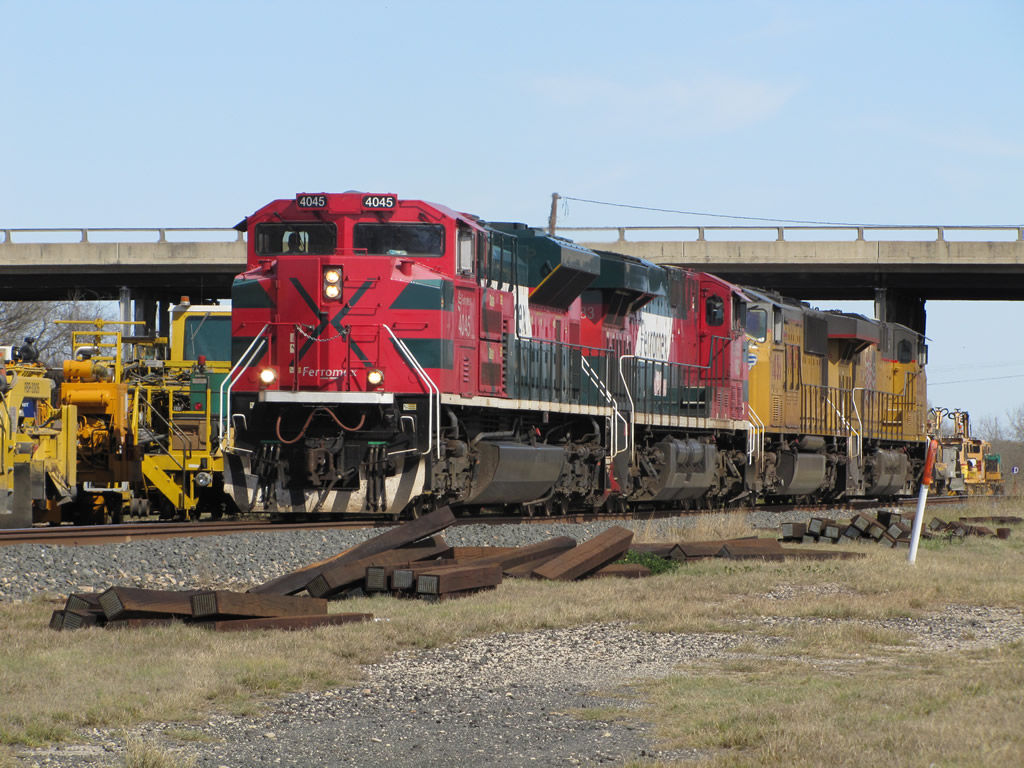 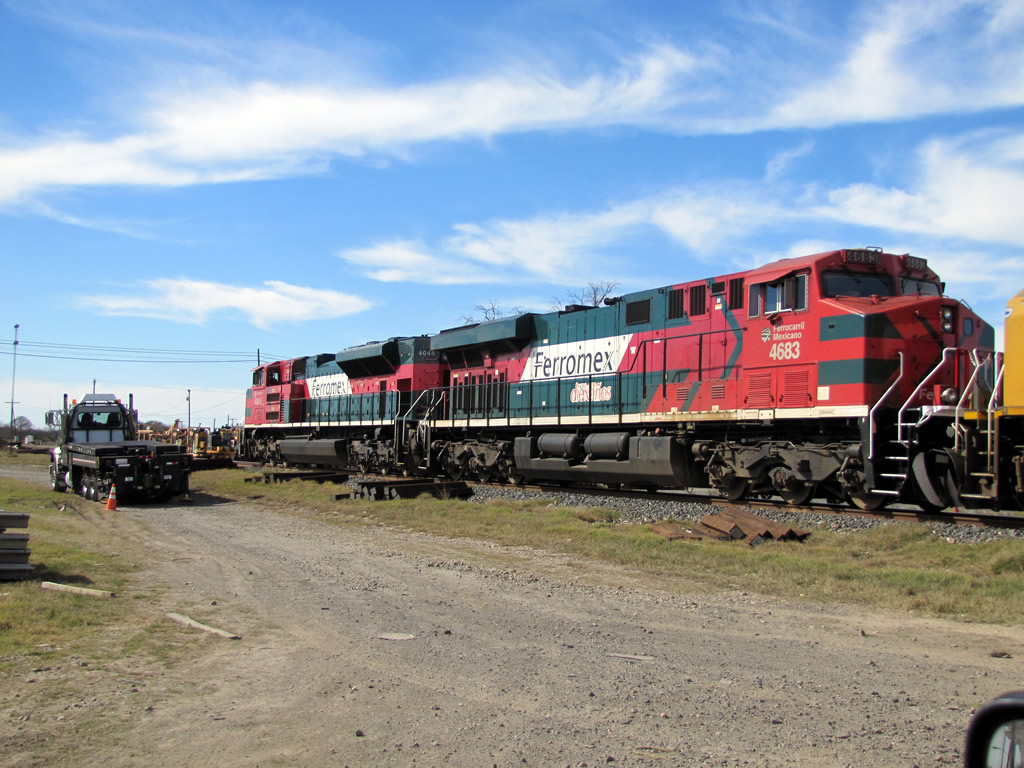 Shortly after the FXE power run came thur Uvalde I heard the DS436 call another light power run to assist a work train in the siding
at Knippa. I was able to catch him at a private cross off Hacienda Rd. roughly around milepost 298. The power move had a pair of
SD70Ms with the UP 5193 in the lead. I almost missed this one due to the speed it was traveling at, the detector at 292.8 clocked
him at 76 mph. 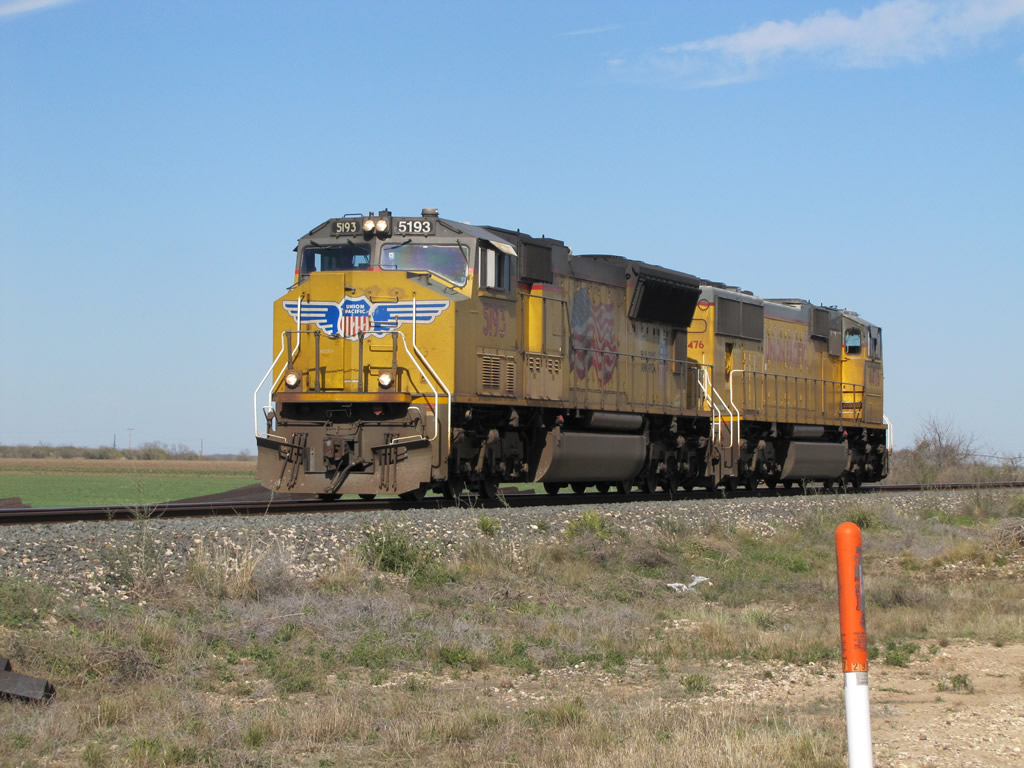 Last train of the day was the work train head west through Uvalde with two John Deer excavators on the consist. This train has been
dropping ties for the last week or two between Sabinal and Uvalde. The train crew called the dispatcher before leaving Knippa to let them know that
they would be clearing the main at Cline for work in the morning. 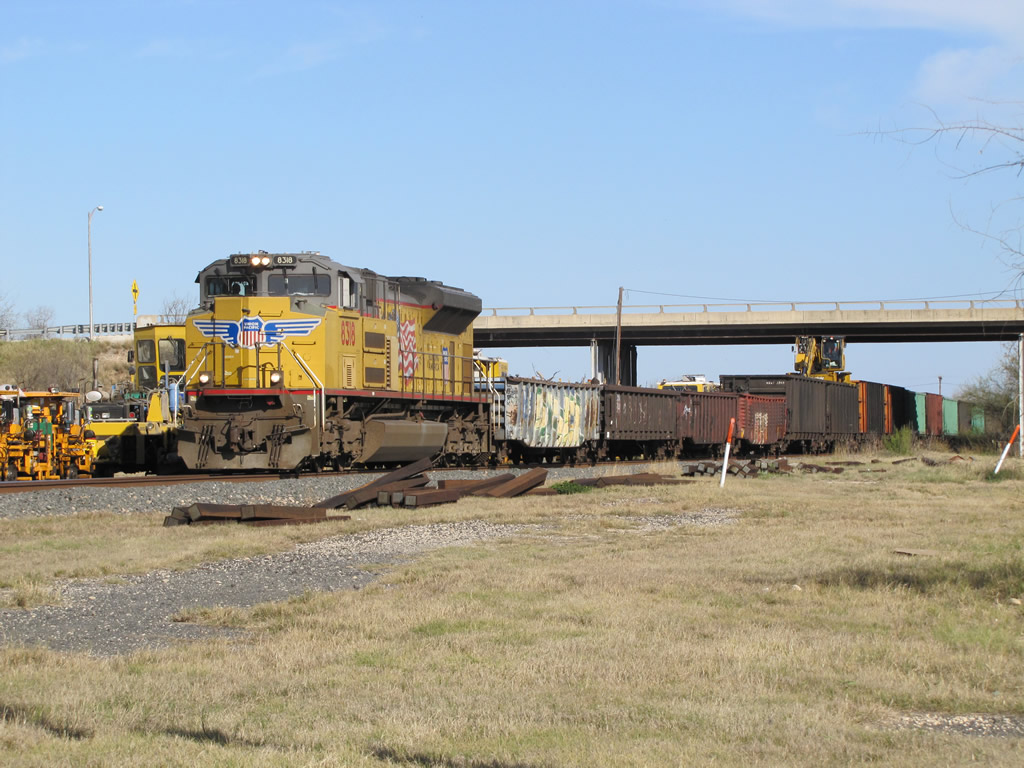 I must say it was a pretty good day of all kinds of different trains on the Del Rio Sub yesterday for it being a Sunday. The MOW crews took some time to work on there equipment at old Uvalde house track for the major windows to come this week. Hope everyone got out this weekend and to advantage of the nice weather we are having.

Nice work Joe! I like that panoramic. While I shoot Panoramic photos at sporting events almost weekly, I haven't shot a railroad panoramic in a long time!
S

Excellent set of pictures Joey. I like your catches on the FXE power.

Good stuff there Joe.
A

Nice photos. Being a traditionalist, it is still difficult for me to think of places like Texas as being UP Country.
T

Thanks Brad, I actually shot that panoramic with my iPhone 5 I didn't think it would come out that great but I had the sun directly behind me so that kinda help.

Thanks Bill, Yeah I see were your coming from if you are compared to Texas to North Platte Nebraska? but we do have may Union Pacific Subdivisions in Texas especially out of Dallas, and Houston.

Thanks UP Salina Sub, With the Del Rio Sub branching off to Mexico we see them down here all the time. If you see the head end lights from far away you kinda get a image of the Miss Katy.

Thanks for all the great comments guys sure enjoy sharing my photo advantages with you'll.
S

Good stuff there Joe. I hope there's something running in Flatonia in a few weeks!