Two Days on the Maumee & Western

This week I was fortunate enough to stumble across the MAW running west in the afternoon. Despite living so close to their "mainline," I've never been able to shoot them westbound in good light.

Monday afternoon started off in Napoleon, where the train is seen creeping past the VFW Hall and an abandoned grainery downtown. 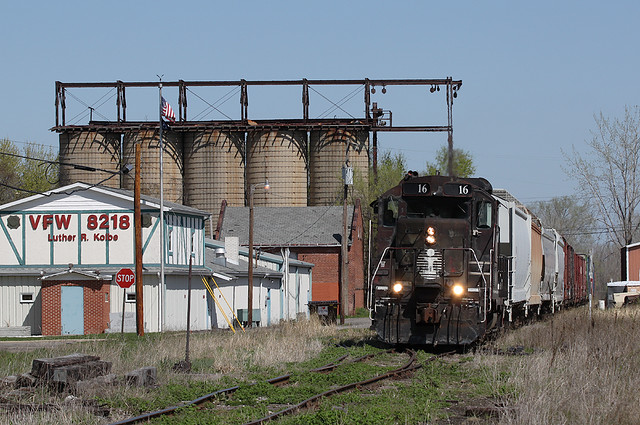 A few blocks to the west, the train holds up traffic on Woodlawn Avenue for a short while. 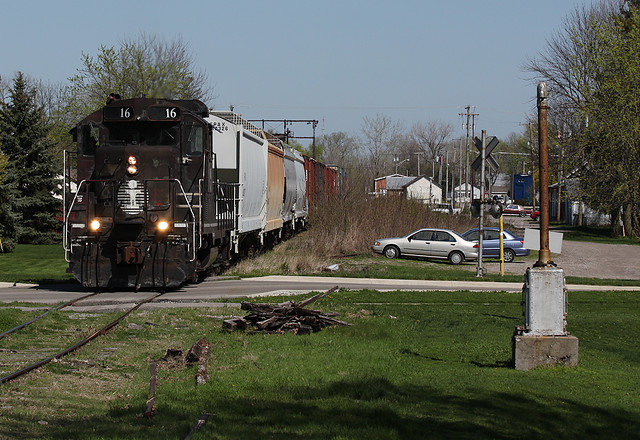 Cutting through the backyards of Napoleon, the train approaches the busy intersection of Glenwood Avenue and West Washington Street. The intersection lies right in the middle of the MAW's crossing. 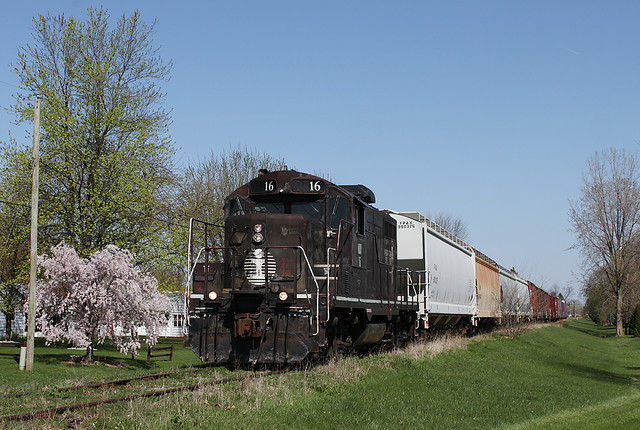 After a few shots between Napoleon and Okolona, the train finally crawls into town and brings everything else to a grinding halt. 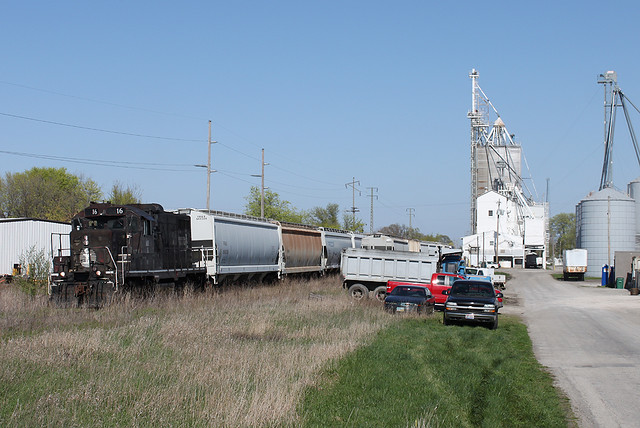 The crew tied the train down a couple miles west of Okolona, so I went home for the day feeling a little distraught that I wasn't able to get a couple of the shots I wanted between Okolona and Defiance. Wednesday, however, brought redemption as I stumbled upon them on my way home from work.

I first shot them as they rolled through downtown Jewell, passing the elevator that once loaded several cars a week here. Now, the rails of the crossover have been cut and cars are no longer loaded here. 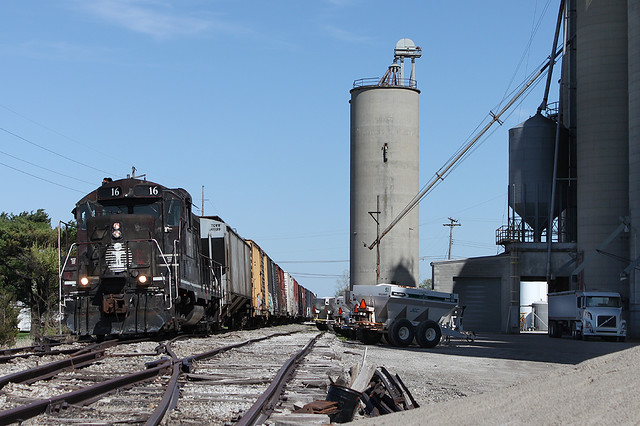 I drove out to the next crossing west of town to shoot them again. It's not hard to keep up with these guys at all. 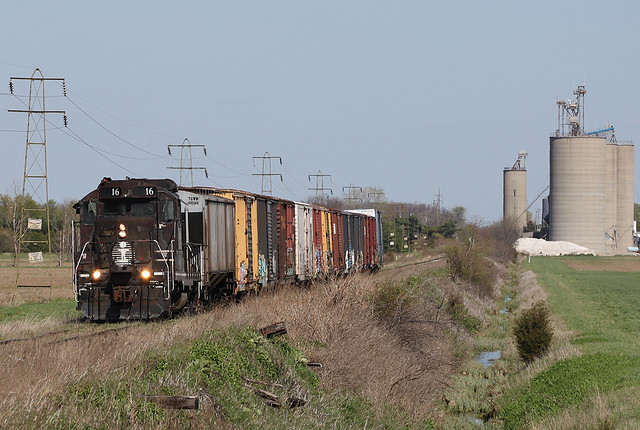 Another crossing to the west, I went for a shot to show just how bad the track is. This isn't one of the worst spots on the line, but it's hard to find any "good" track at all. Keep in mind that the scene is level, the train is not. 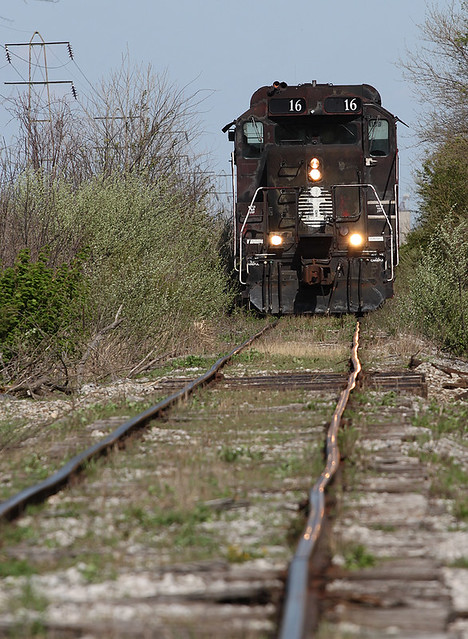 Next, I drove into Defiance to get gas and a quick snack before they came into town. After a little exploring, I discovered a hidden path leading down to the river on the west side of the bridge. The result is a shot that, to my knowledge, nobody else has. Here, the train eases across the muddy Maumee River. The buildings in the background are those of Arps Dairy, perched overlooking the Maumee. 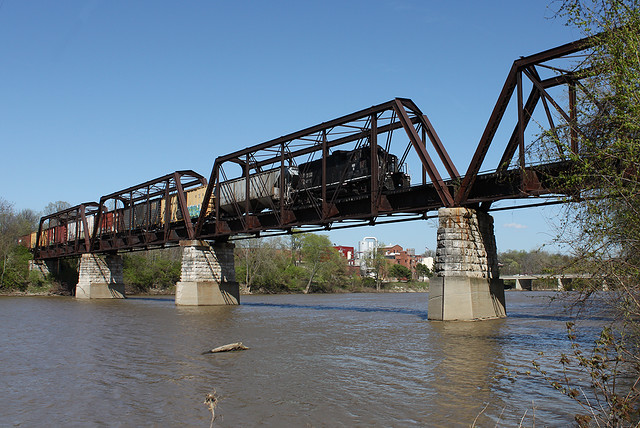 My final shot of the day was after the crew cut away from the train and brought the 16 into the yard. I chatted with the conductor briefly before calling it a day and heading home. 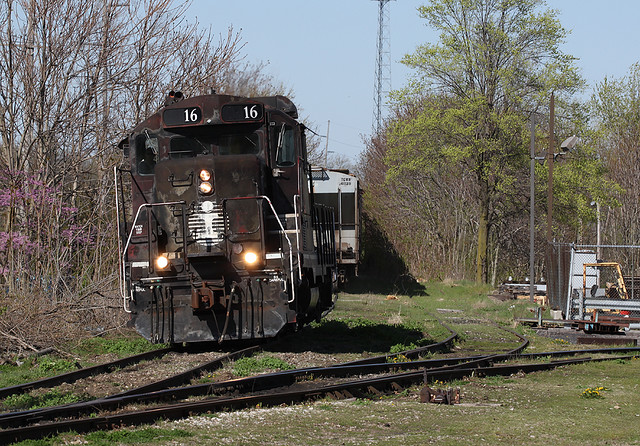 One of the things I discussed with the conductor was the recent rumors of abandonment and FRA sanctions against the MAW. He told me that the FRA was mainly focusing on the west end of the MAW. That portion of the line doesn't see as much traffic as the east end, but the cars they do get are mostly Haz-Mat, hence the FRA's interest in keeping operations safe. He also told me that traffic was "as good as it's been in a few years" and that as far as he knew, there was no talks of any abandonment in the near future.

Great set Wyatt! Glad you are capturing the MAW now - one day those will be great historical shots.
S

Mr. Pick said:
Great set Wyatt! Glad you are capturing the MAW now - one day those will be great historical shots.
Click to expand...

Agreed! Thank you.
A

Great shots! They sure need to do some track work

It's one of those lines you got to shoot when you can. I like the "Another crossing to the west.." and the shot over the bridge. I was headed into GM a couple years ago and saw the MAW was coming. "Cool" I thought and stopped to wait...and creep by they did with me on the wrong side of the crossing.