Just wanted to get started the sharing of photos with the rest of the world from the Annual confab in Stevens Pass Washington on the BNSF Scenic Sub..
Big thanks to Roscoe for organizing and hosting the get together. Also a call out to Henry and his staff at the Cascadia Inn for their hospitality and service in Skykomish.

This year ended up being one of the best events, pretty lucky for my first time at it. 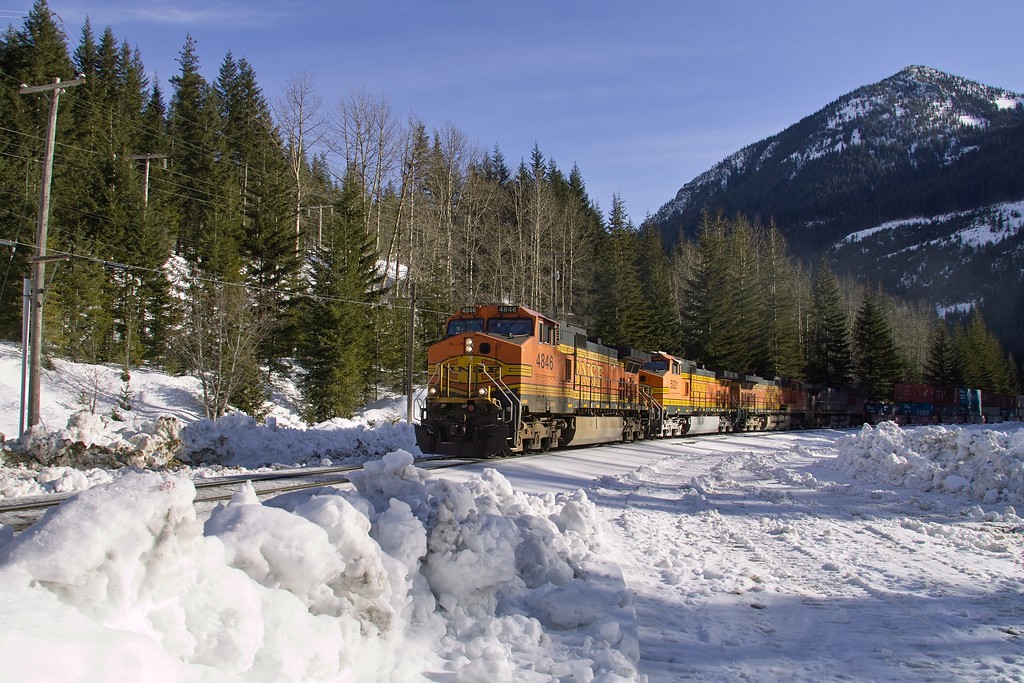 Stack train cresting westbound grade prior to plunging into the east portal of Cascade Tunnel. 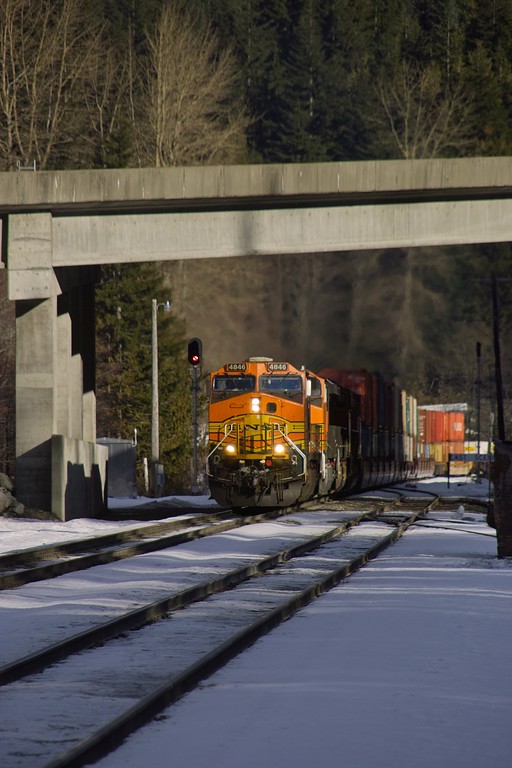 Same train passing under US2 after exiting west portal of tunnel. 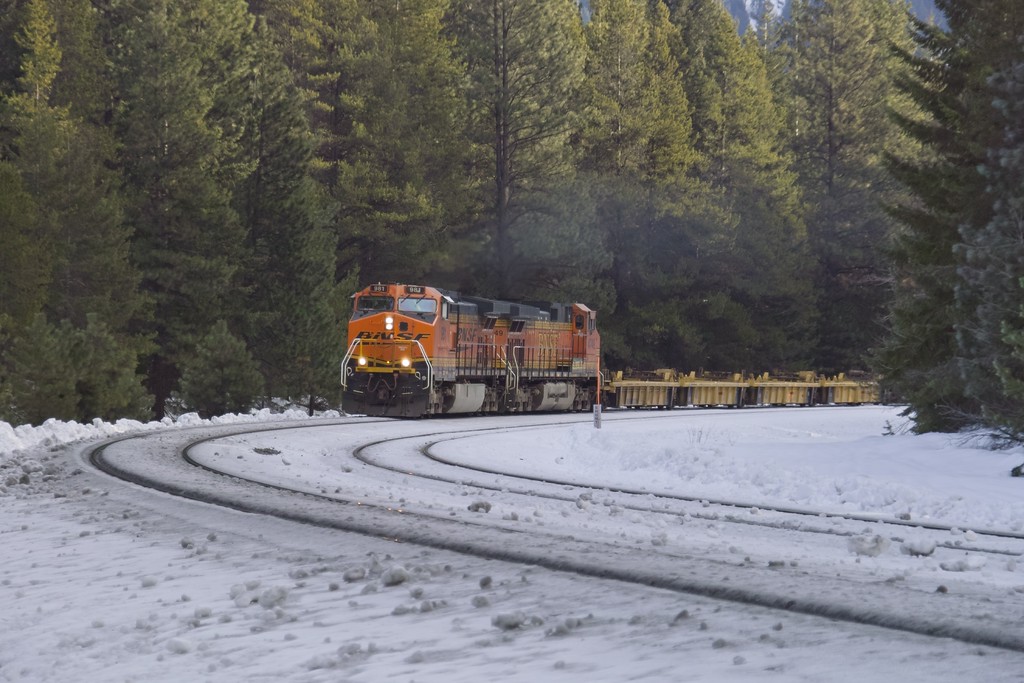 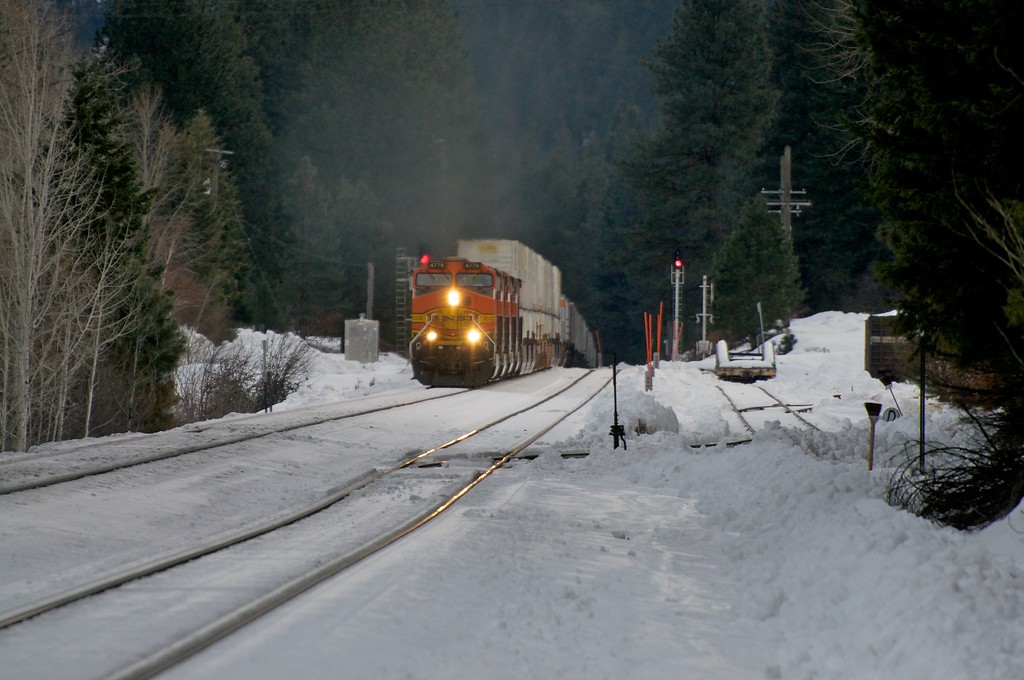 Z train on the grade at East Winton

My non streaking version of the Empire builders friday night passage through Skykomish. 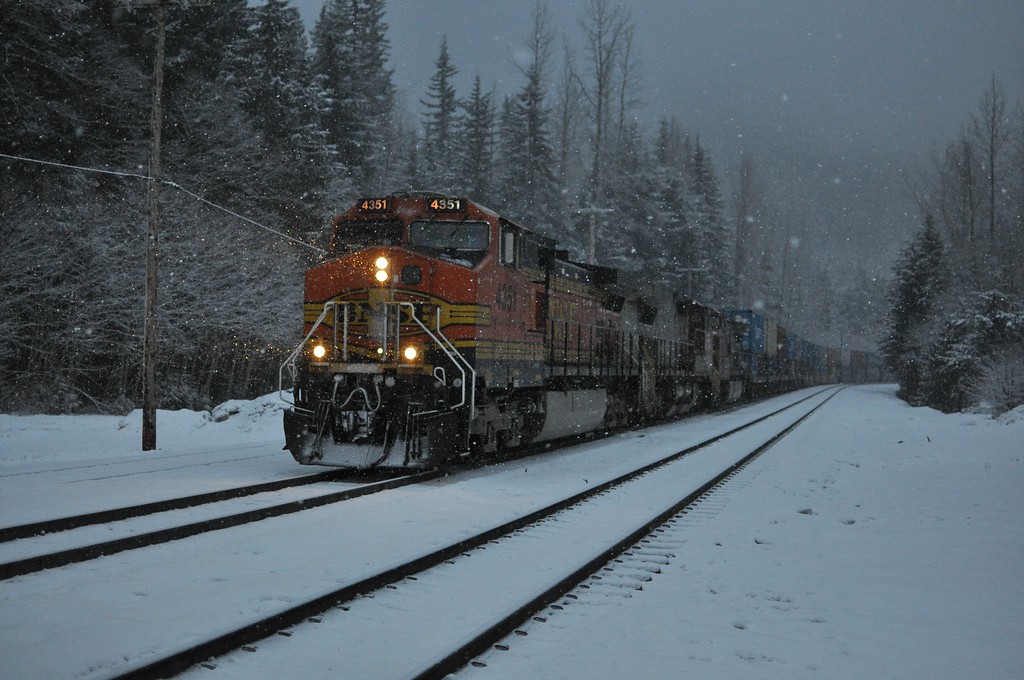 After an early breakfast at the Cascadia we catch this stack train taking the siding at Scenic at the snow is starting to fall. 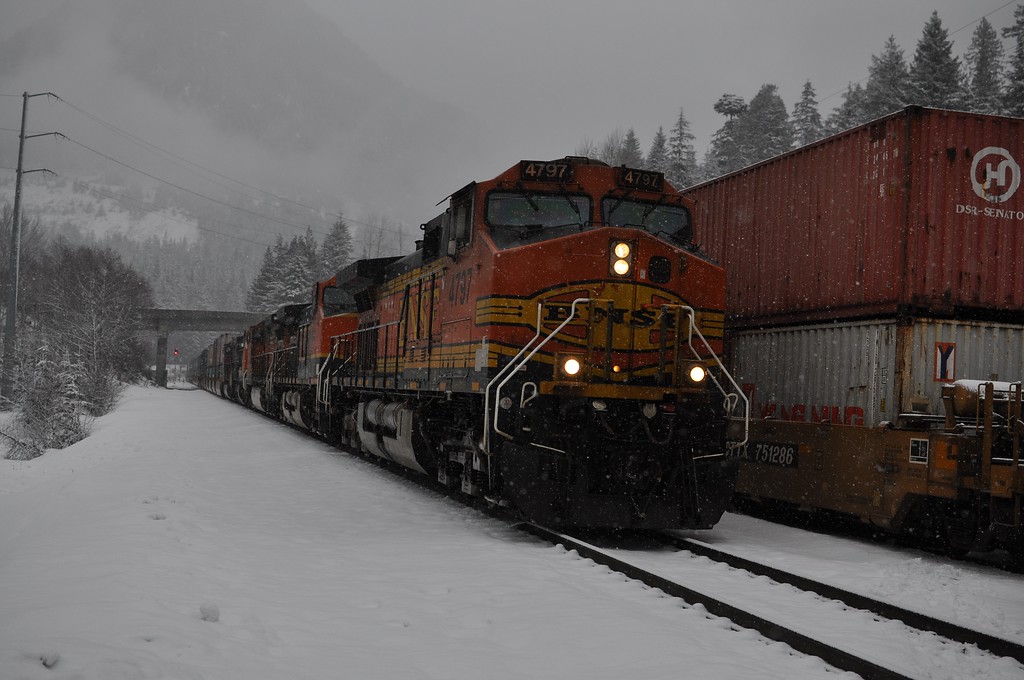 Finally this westbound stack train popped out of the tunnel. 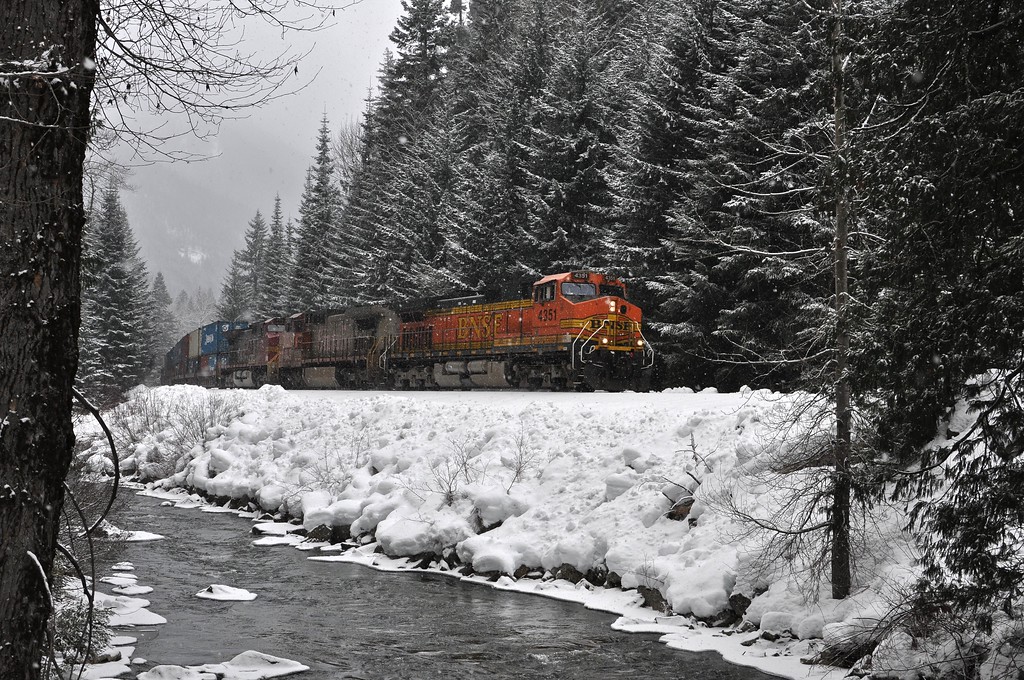 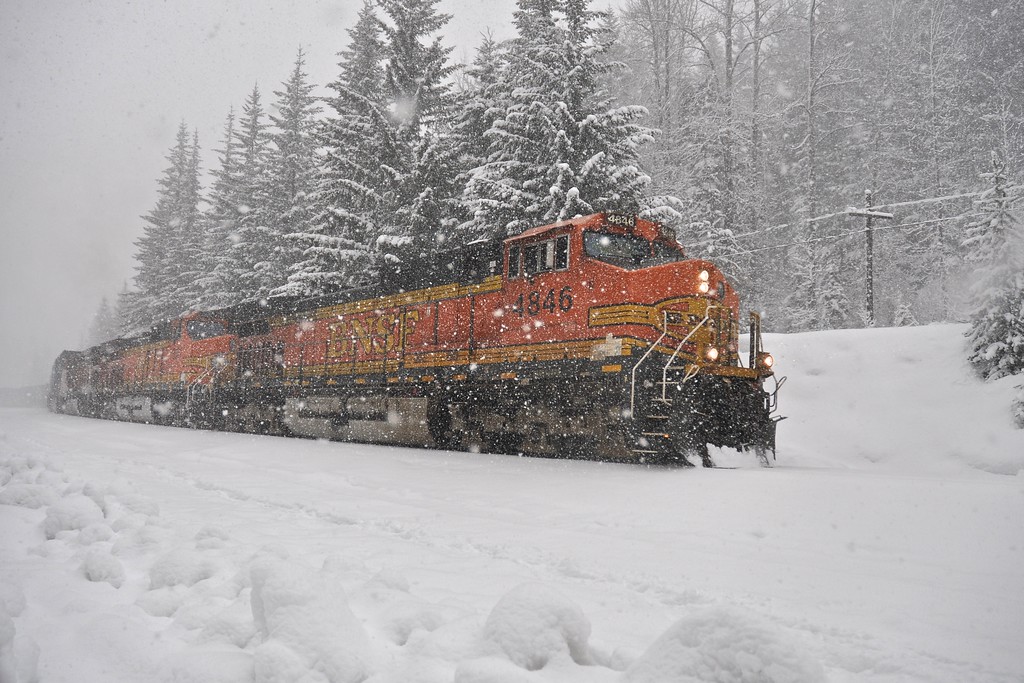 Up to East Portal where it is really piling up. 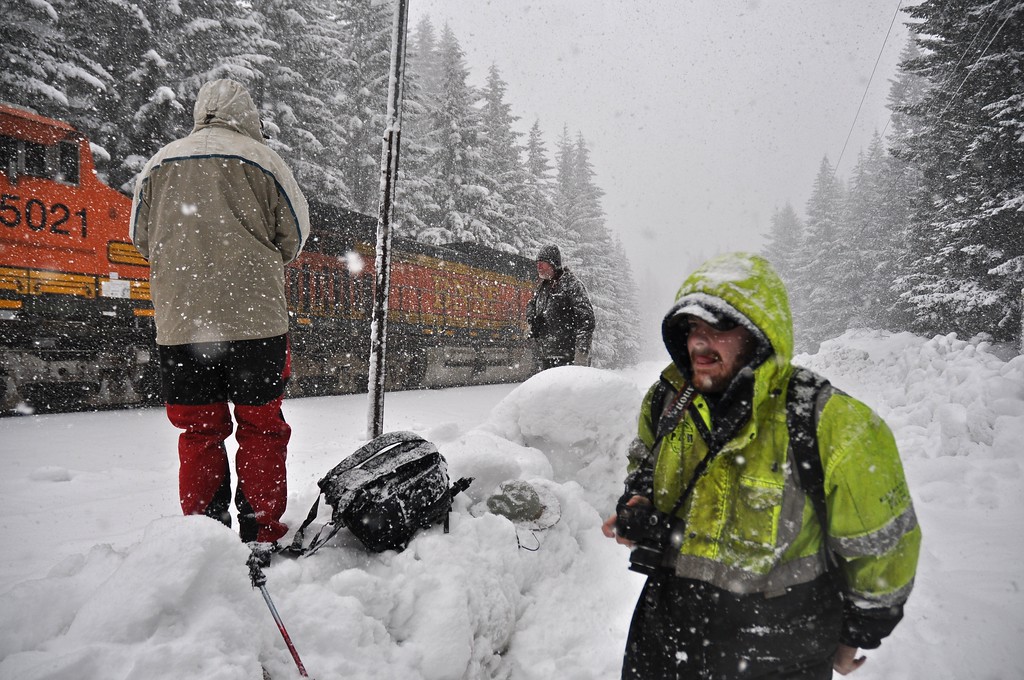 Really we are having FUN! 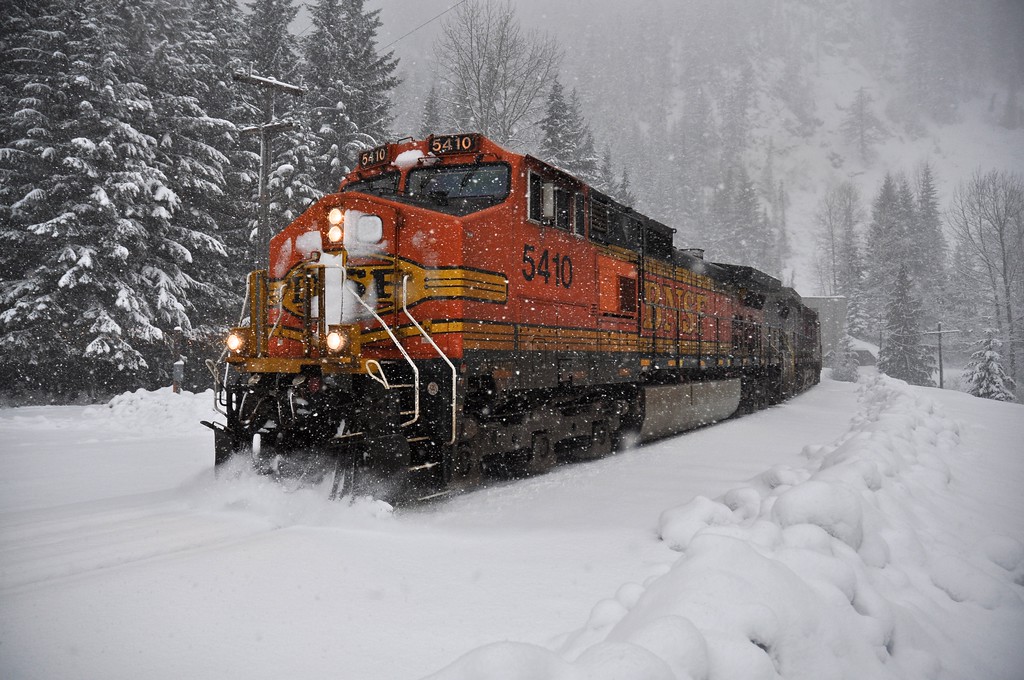 It is coming down so fast not that the snow is piling up high enough between trains that the engines plows are pushing snow. 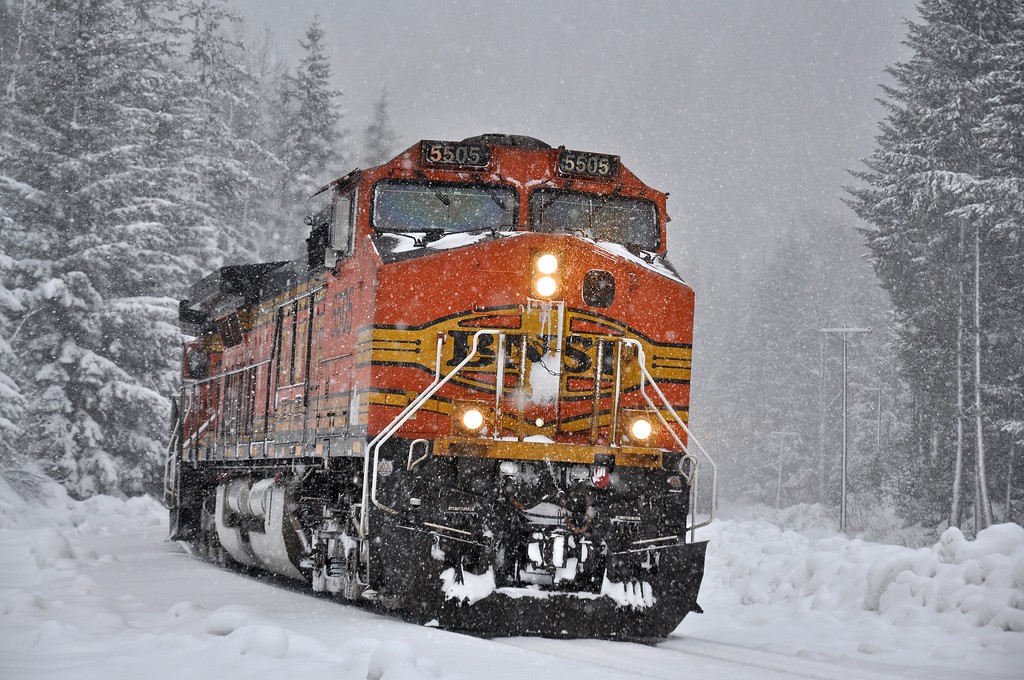 Another westbound crests the grade before plunging into the darkness of Cascade Tunnel. 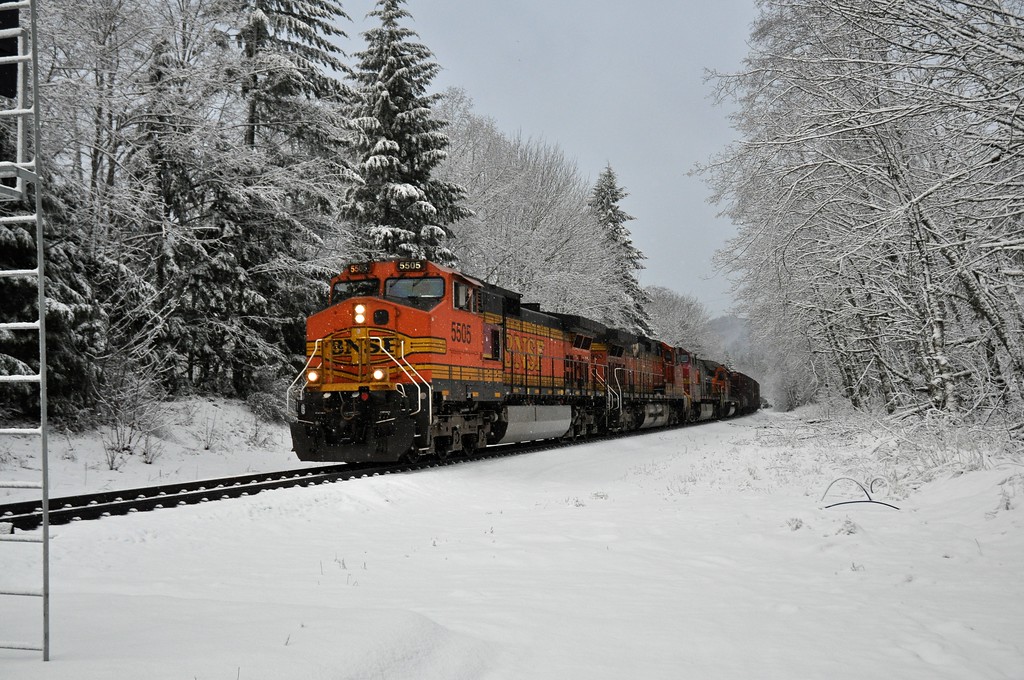 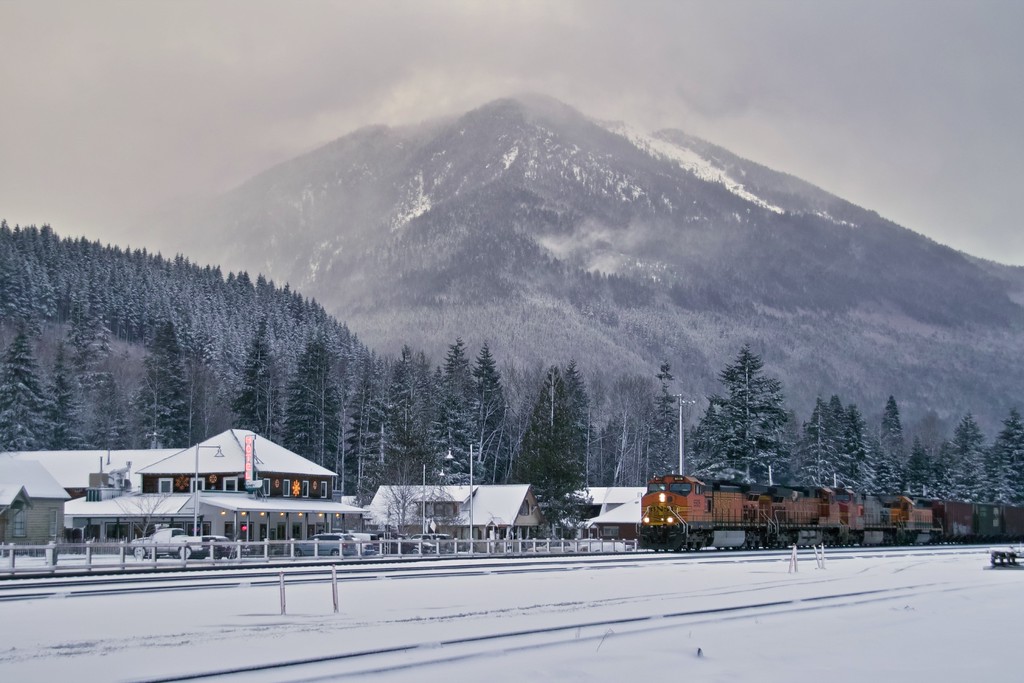 Skykomish transformed into a winter wonder land.
Other will have more amazing shots to contribute I am sure.
Paul

Cool event. Looks like fun. Is there always snow up in the Cascades? Does it ever melt?
A

Superb, Sweet, Amazing, Fantanstic Photos. Looks like fun and the mountains.....OH the mountains. What a place to be. Thanks for spending the time out there and sharing the photos. TZ

Thanks Guys, there was a lot of superb photography done this weekend by others. They should be checking in as time allows.
Weather wise this was an exceptional weekend. Winter conditions can vary wildly on PNW mountain passes. A warm "Pineapple Express" system can dump rain in the dead of winter turning it into track in the mud with floods too(last year). This was a cold gulf of Alaska system that was a prelude to the current mess in the national new gripping Seattle in a to 10 level snow event. Other times a ridge of high pressure can force a bone chilling east wind that can do really wild things when it mixes with a wet pacific storm system.
Planning a trip would be a risky bet, however locals can head up when conditions come together. Although generally there is snow most of the winter particularly on the east side where the pacific has less influence.
Pete

Excellent photos! I agree with Tom, I really like the creek shot. I also like the last one! Thanks for sharing and enduring the elements!

I was standing right next to pmpete when he took his shot of Amtrak, and here is what I got.

Caught a baretable at Merritt before the mass snow hit.

On my way to the event, I caught the CSCD in Wenatchee, a first for me.
B

It's nice to see Sky coming back together as a town again!

I Love the shot of the Motel. Have been there many times and have seen it snow so hard and such big flakes you could hear them shushing down. Snowed about 2 inches a minute . Ran a truck over It and Stevens for almost 4 years hauling Aluminum from Spokane to Chicago and Extrusions 65 ft long for the 767 back from Lafayette IN. Boy do I hate winter. Why don't Conductors have to chain up?!!

We really lucked out on the weather and were all happy to see lots of falling snow, and lots of trains.

1. At some locations it actually snowed too hard like in this shot Saturday morning at The Slot. 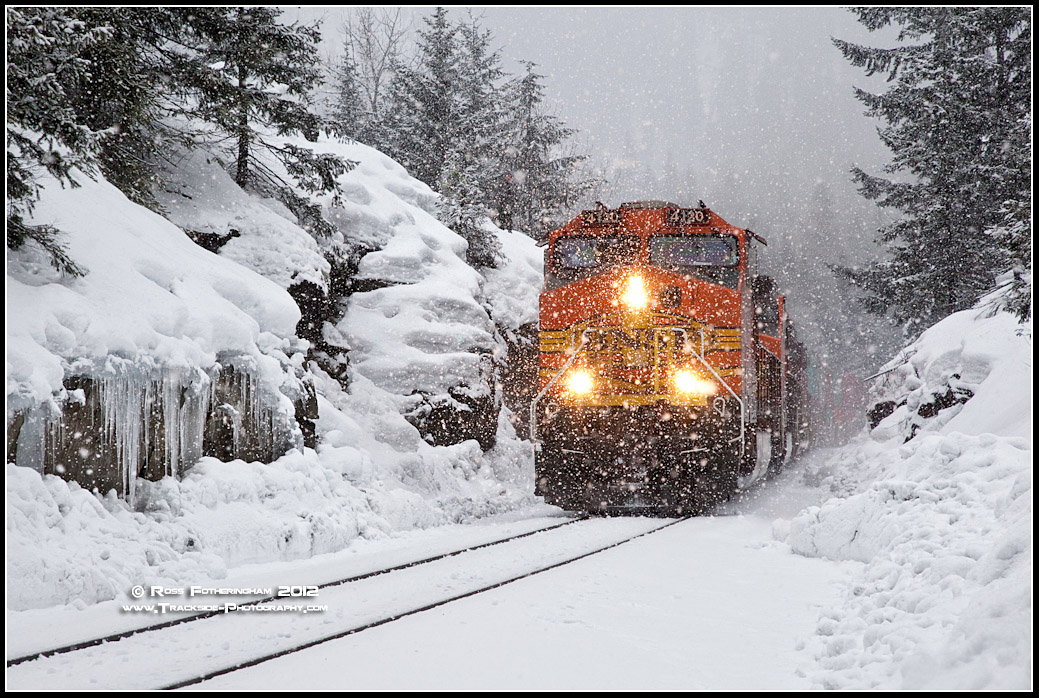 2. Sometimes during the day it snowed more than an inch an hour and we looked more like snowmen than rail fans, but no one dared complain. 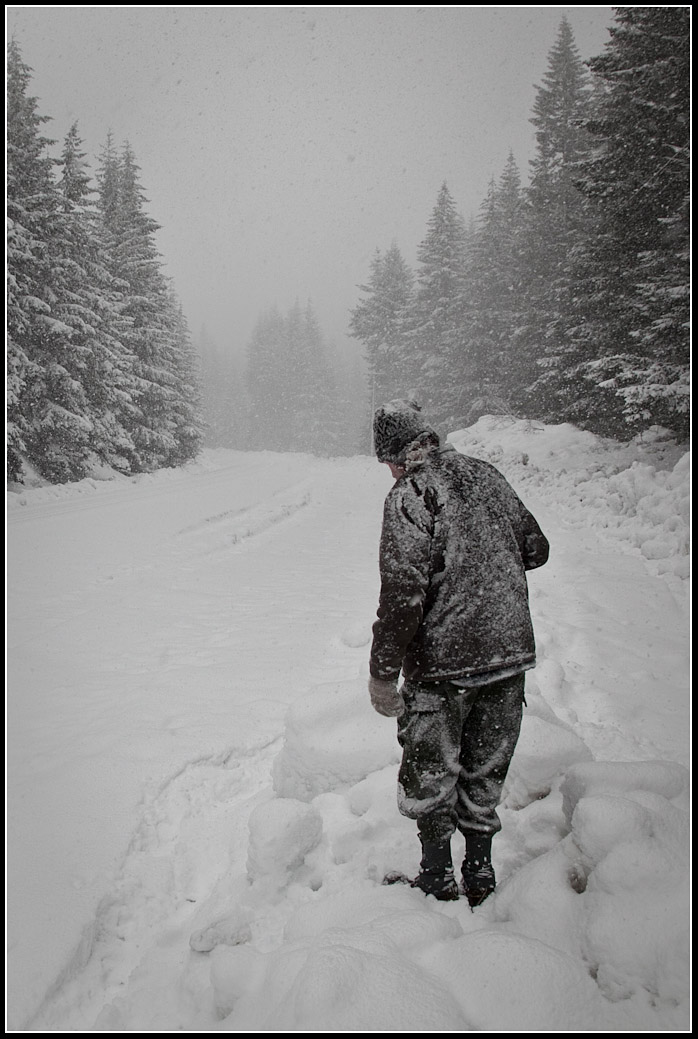 3. It all payed off though as train after train showed up snow-kissed in a winter wonder land. 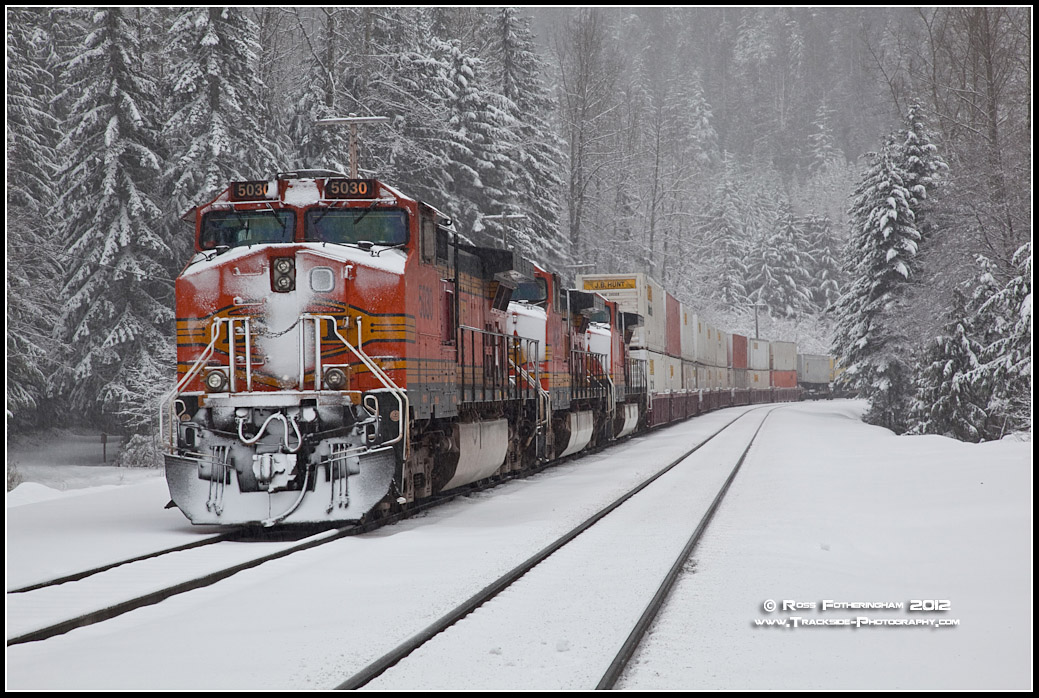 4. We didn't just shoot during the day either. After our prime rib dinner Saturday night we all headed out for more. He's Amtrak number 8 crossing Foss River Bridge. 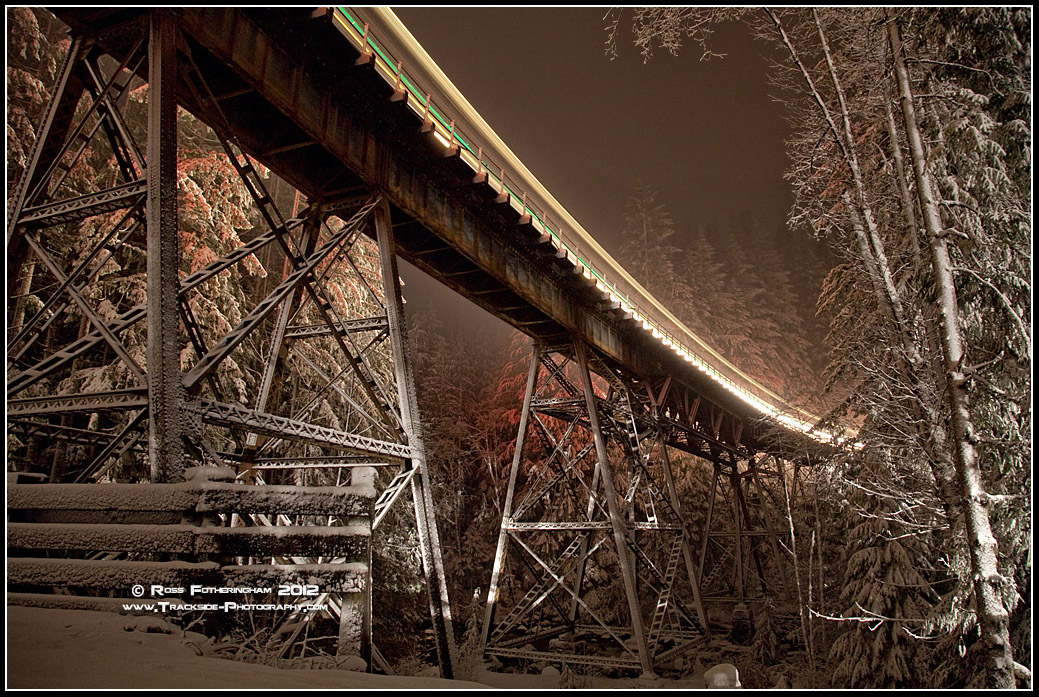 5. At Scenic we find another meet between this eastbound Z and a westbound J-Train carrying 737 fuselages. 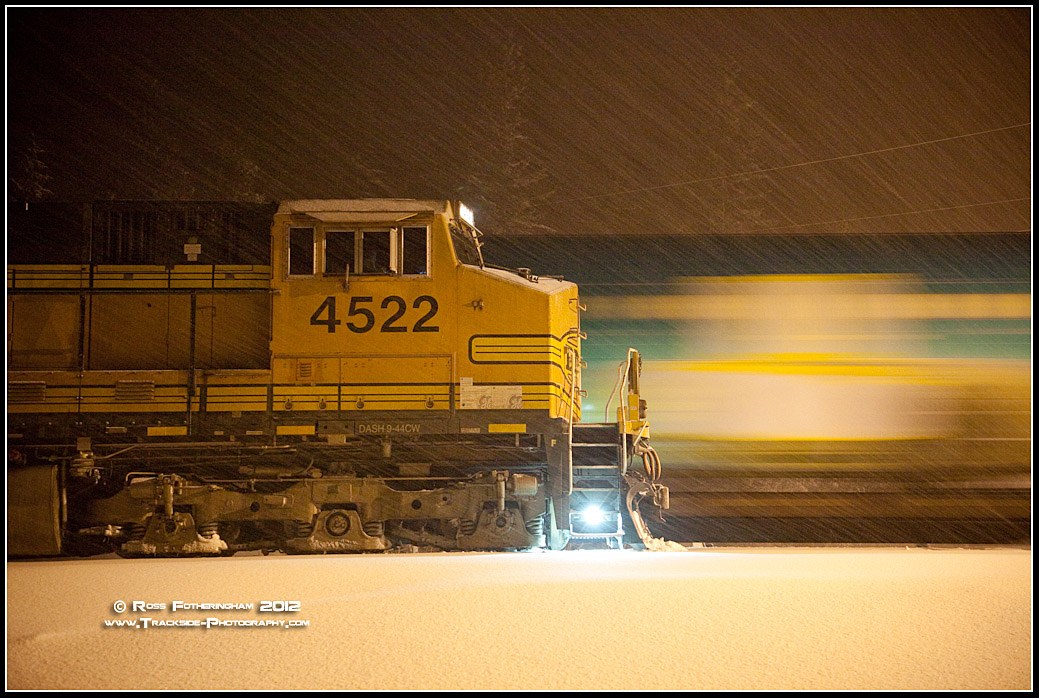 6. Here's a little over half the crew eating our early breakfast the crew at the Cascadia whipped for us. This is the 4th year I've based the event out of Skykomish and the 3rd year in a row that we've booked exclusively with the Cascadia and I cannot go on enough about how well we were taken care of here; whether it was the early hours they did breakfast JUST for us, the late hours they kept the bar open so we could all have a beer and some laughs before bed, the Great food, friendly staff, etc, etc, etc... 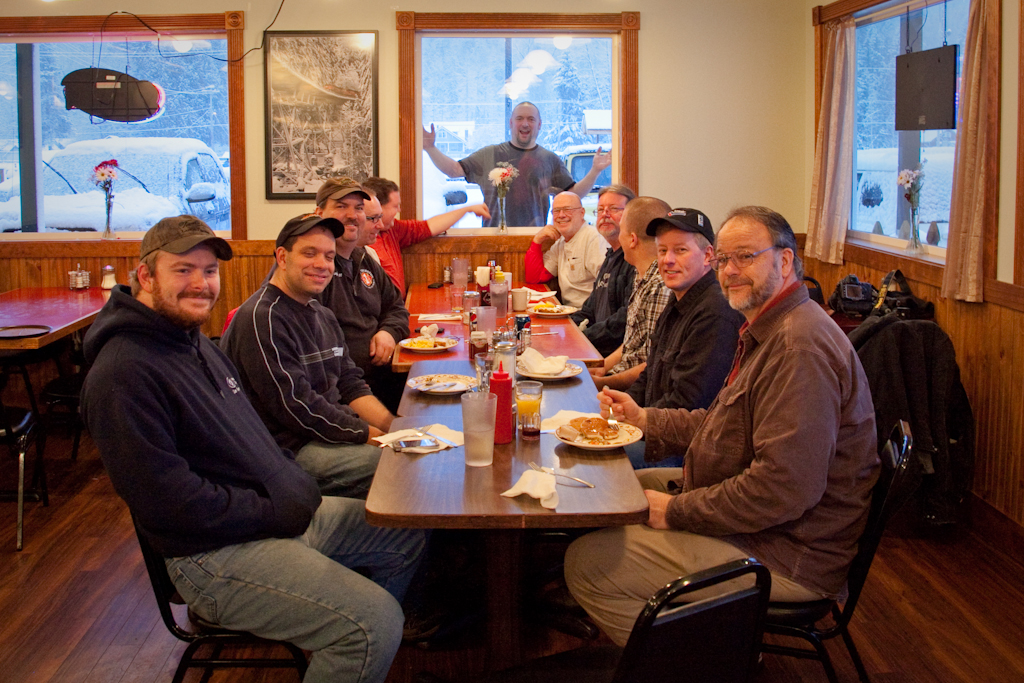 7. Sunday was full of more snow and between Seattle and Everett the trains kept the morning busy. Here's an empty worm train at track speed in Index. 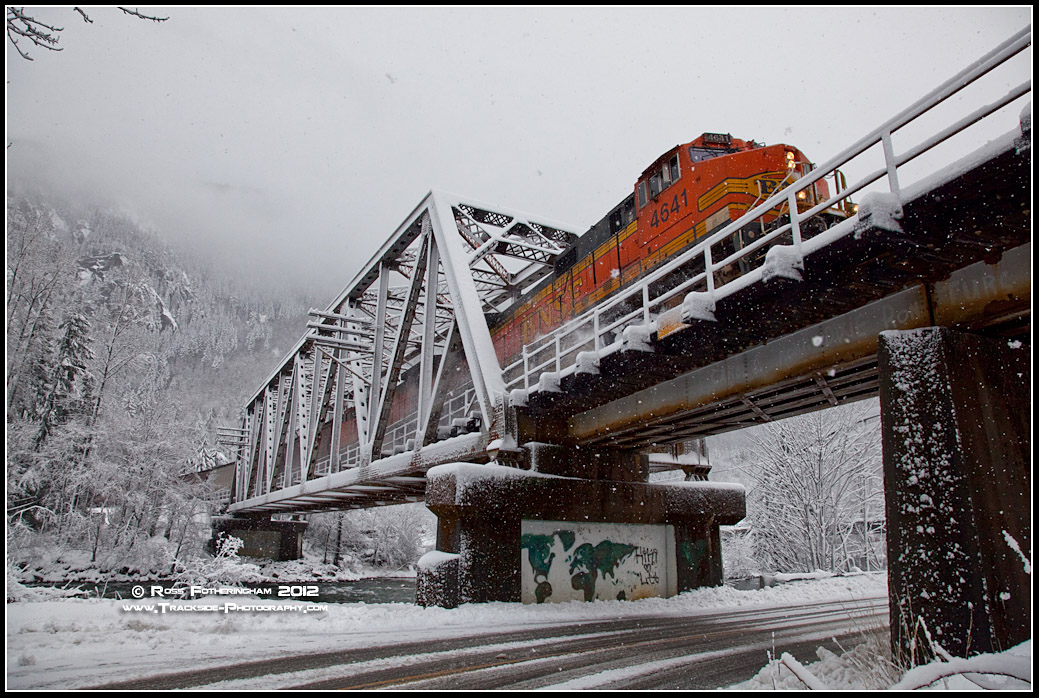 8. Last one from me, a Wenatchee bound dirt train crossing the Skykomish River at Big Eddy near Gold Bar. 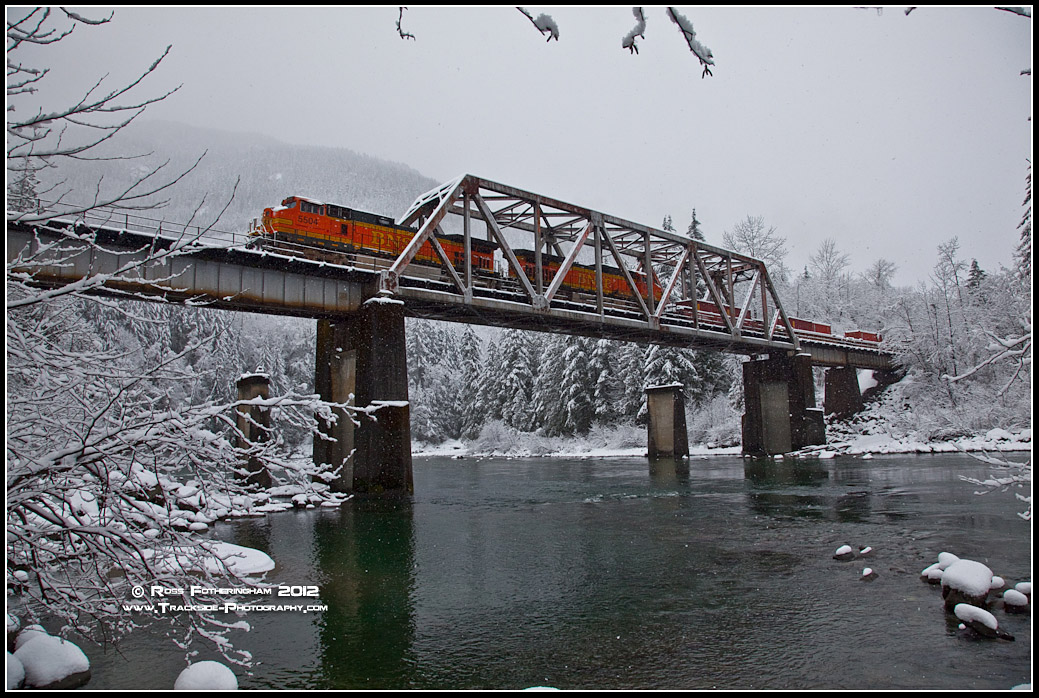 Hopefully some of the other will post their shots too. Thanks to everyone who came along.

More incredible stuff guys! Now THAT'S a snow storm! If we get more than 3 inches people in town start calling it a "blizzard".

Trackside said:
We really lucked out on the weather and were all happy to see lots of falling snow, and lots of trains.
Click to expand...

Outstanding job Ross! All of those photos are great, but for my money it doesn't get any better than photo #4. Well done.
B

#4 is stunning Ross, forget the railroad genre, it's just plain stunning. That has got to be suitable for some kind of an award.

Ross, love that night shot on the bridge!
C

bristol4life said:
That has got to be suitable for some kind of an award.
Click to expand...

Yea, Dave got one from Trains for that shot a year or two ago. Whose is that on the wall at Cascadia?