This years even was the wettest by far, but it was once again a record crowd of railfan attending the event held on BNSF's Scenic Sub in Washington State.

The event was the weekend of January 15 and I'm hoping some of the others who attended will post their pics as well!

Big thanks to the crew at the historic Cascadia Inn for taking such great care of us!

Here's some of the video I took from the trip. The opening time laps scene was taken from one of the rooms in the Cascadia Inn in Skykomish.

The freezing level was really high (8,000 ft plus) all weekend and a series of lows came in off the coast bringing huge rail totals. So it rained pretty much all weekend, but there was still some great shots to be had.

1. Here's a meet at East Skykomish between a stack train carrying 737's and an empty coal train. This location wasn't easy to get to with about 12 inches of wet snow on the logging road and as one in the group found the 4WD requirement is from the first steps Friday. 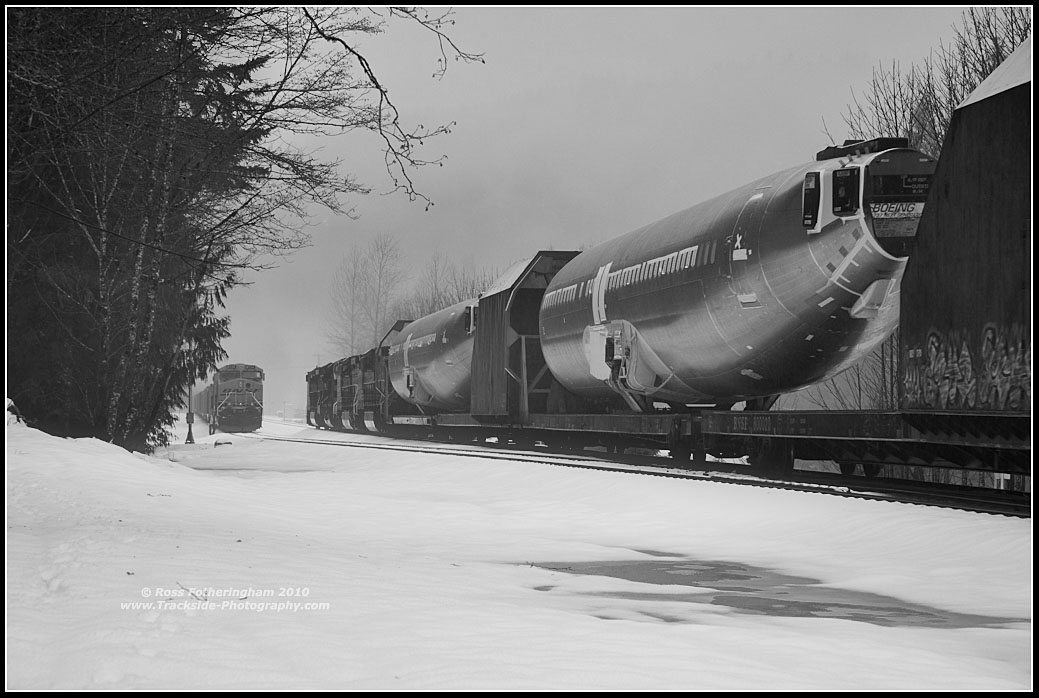 2. A westbound stack along the Foss River just before dark. The light was so low with the clouds and time of day, I wasn't thrilled. So I cheated and after some test shots seeing exactly what type of exposure and image I'd get I used those settings with the camera in full-manual mode. No Ansel here, but I still love those warbonnets! As you can see I was barely treading water - 1/60, F/4.0, 35mm, ISO 6400 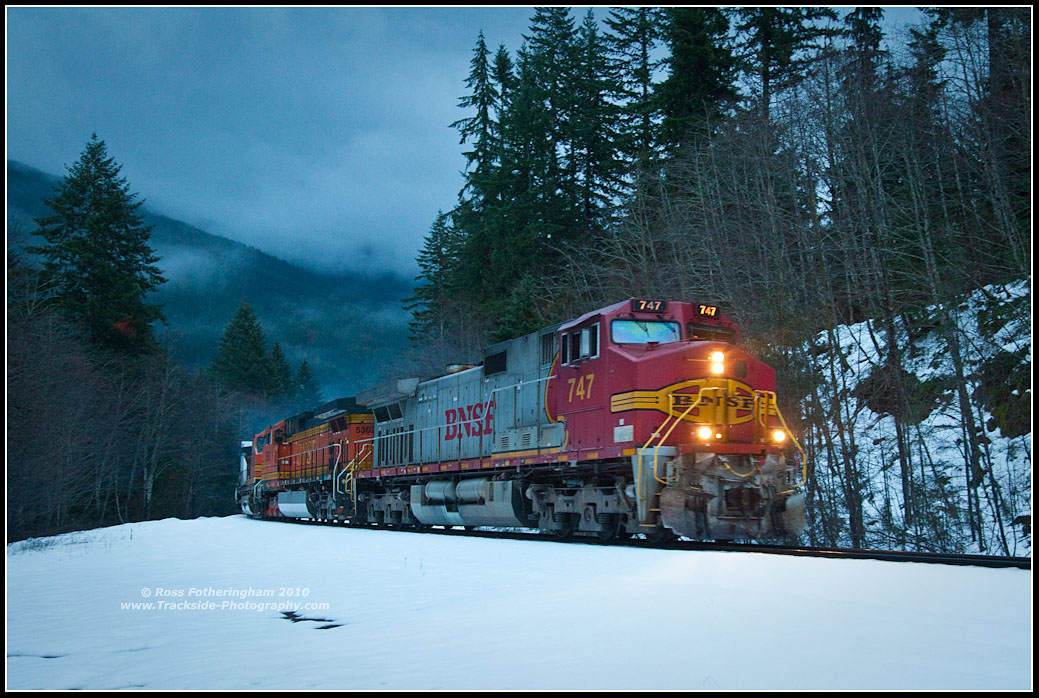 3. West Portal of the Cascade Tunnel waiting for the M-EVESPO to show up so Amtrak can run-around. Lots of low fog gave the Star Wars effect. A 172 second exposure, f/8.0, 50mm, ISO 400. The ski resort provides the background light. 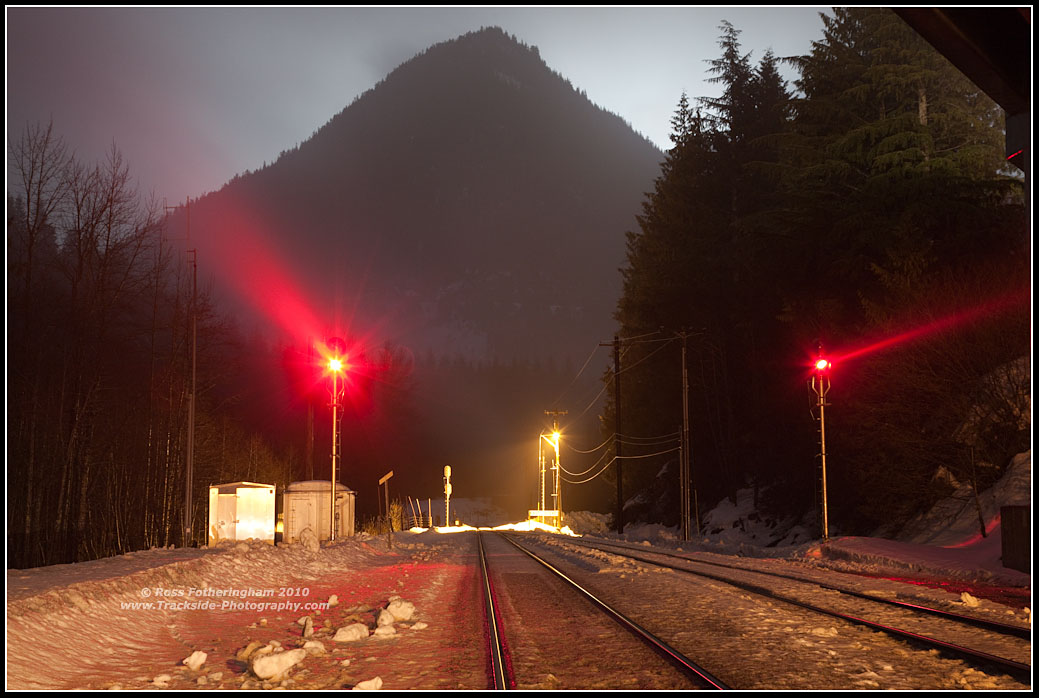 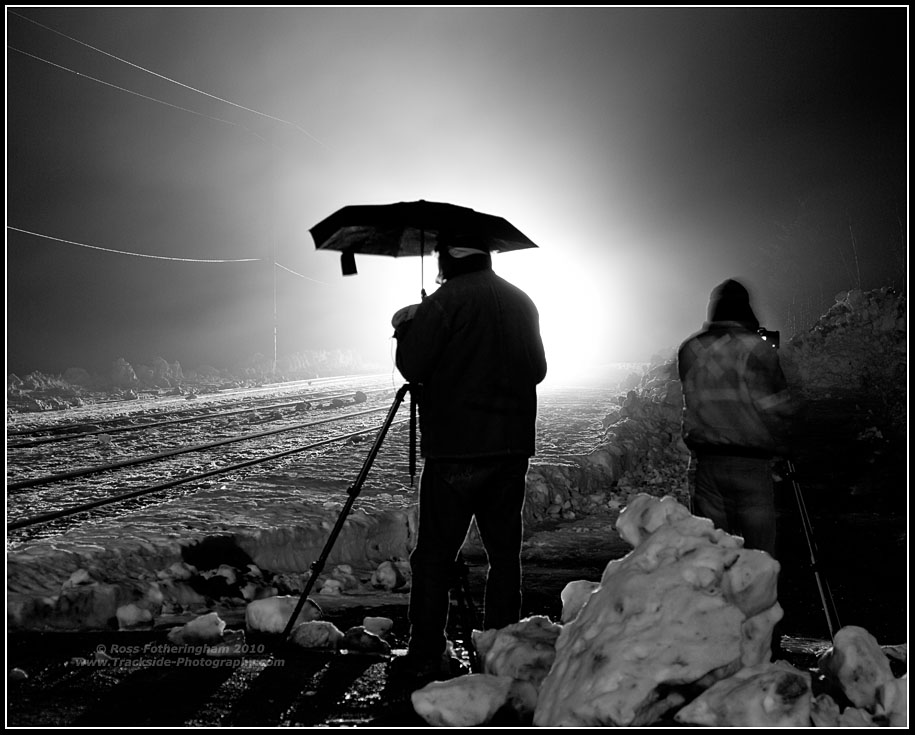 5. On Saturday most of the group woke in the middle of the night and headed to Trinidad so we were there by first light. Railfan and Trains Magazine corespondent Scott Lothes takes a shot of a Z-train coming through the cut at the Trinidad Loop. 1/80, f/8.0, 105mm, ISO 400. 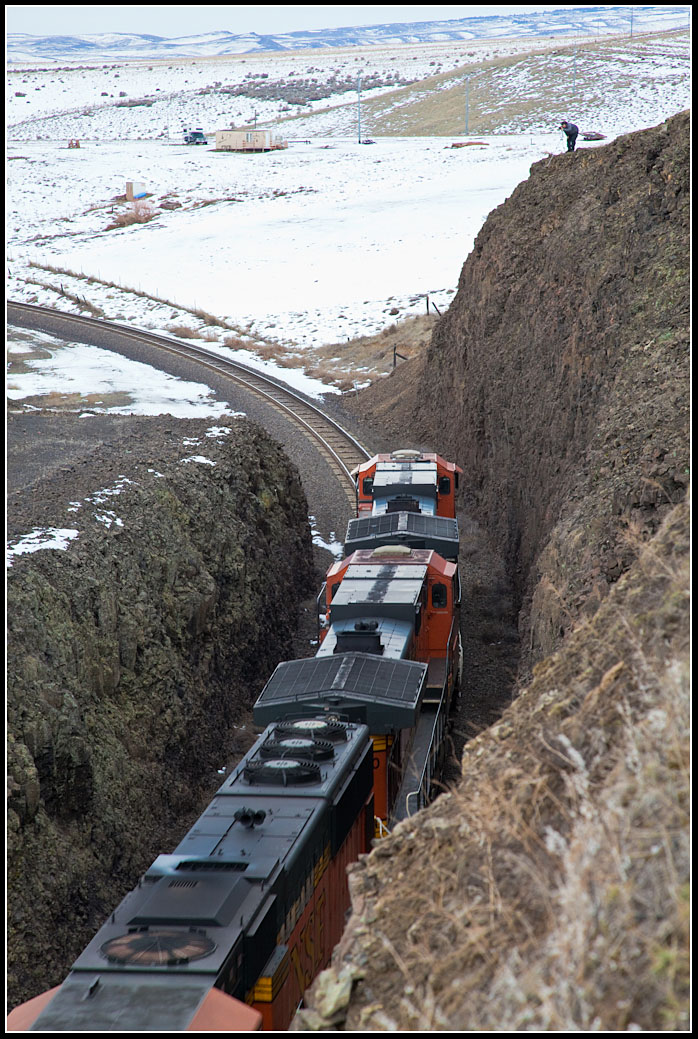 6. Even with the bad weather some still managed to get the snowshoes out. Dan Bolyard and I shoe'd into East Berne with a empty grainer. Thanks to Martin for suggesting this spot and to Dan for making the trek with me! 1/100, f/8.0, 105mm, ISO 800 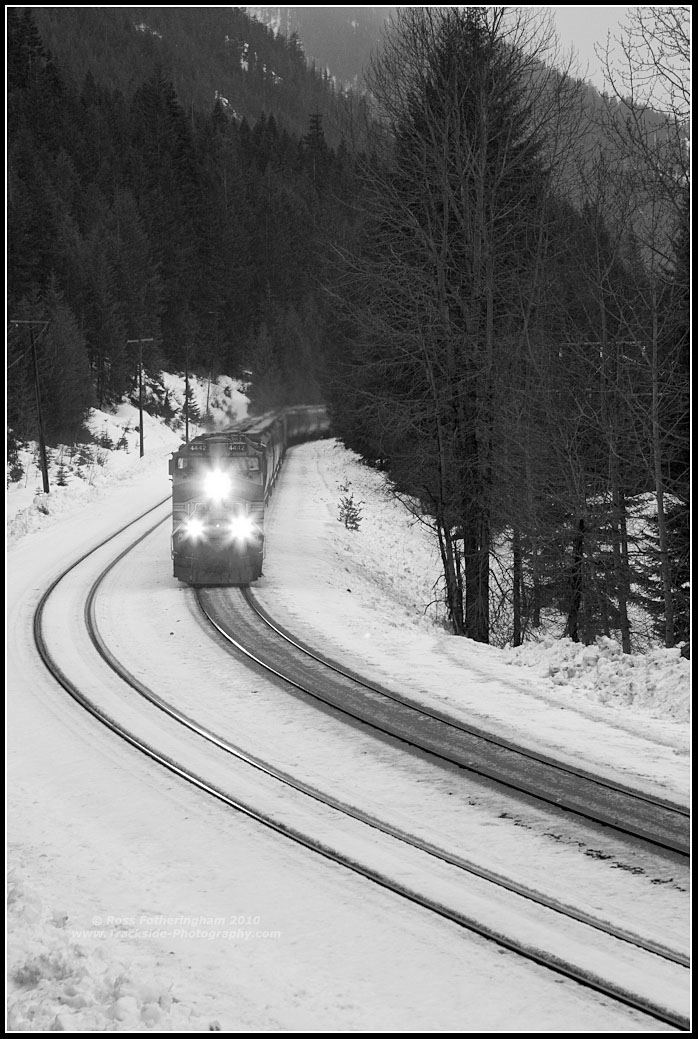 A big thanks to you Ross for putting this outing together. Good fun with good people...it's a winning combo no matter the weather.

This is an awesome series Ross. 3, 4 and 6 are my favorites, especially 4 with the backlit silhouette.

Nice shots Ross. I really like the Boeing shot.

Glad you went "old school" and started a post here.

Once again, thanks for setting this all up. Snow or rain, it's better than a days work!

Here's my "cream of the crop".

I didn't get out until Friday evening.

Here's my third train leaving EB out of Gold Bar after waiting for a WB. 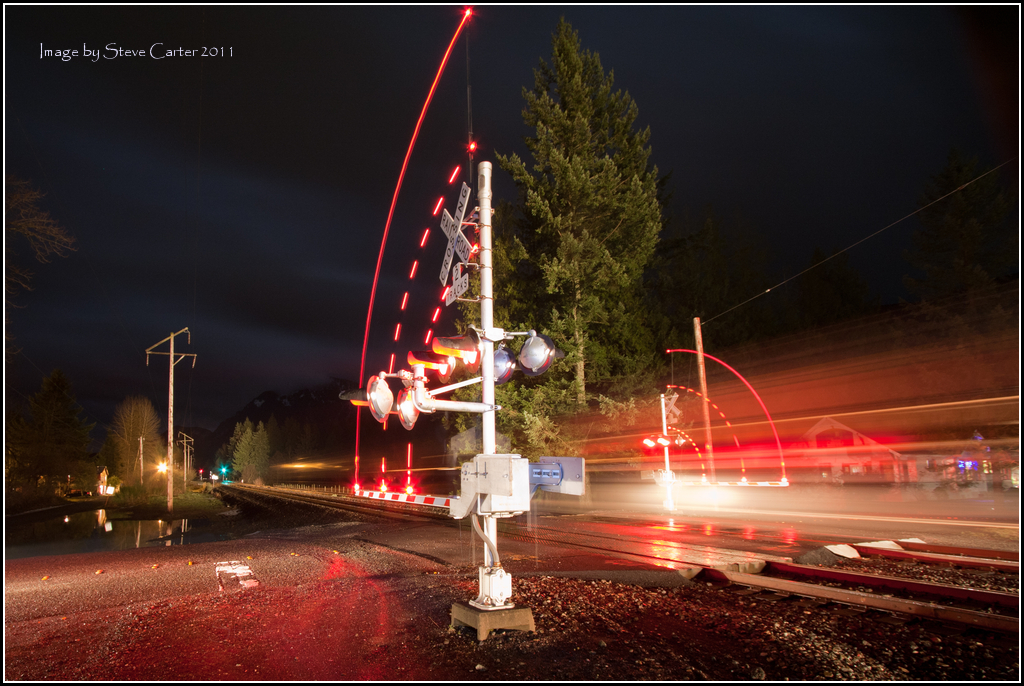 Up at Scenic an EB provided some interesting lighting for the spreader. 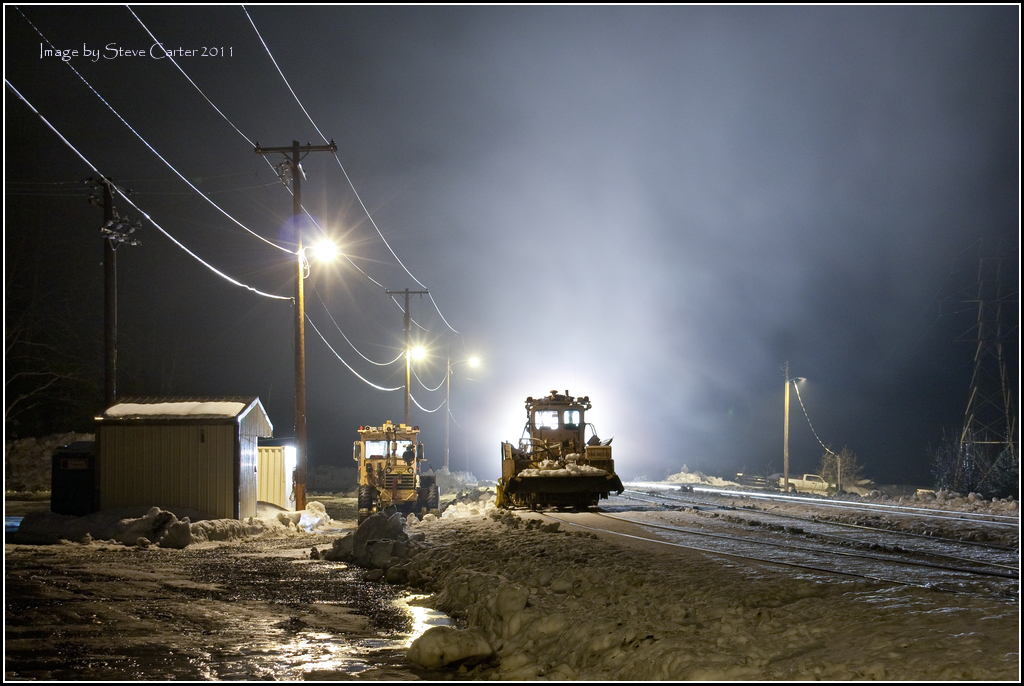 My "first light" shot at Big Moody (or is it Big Muddy), just east of Gold Bar. Saturday morning. 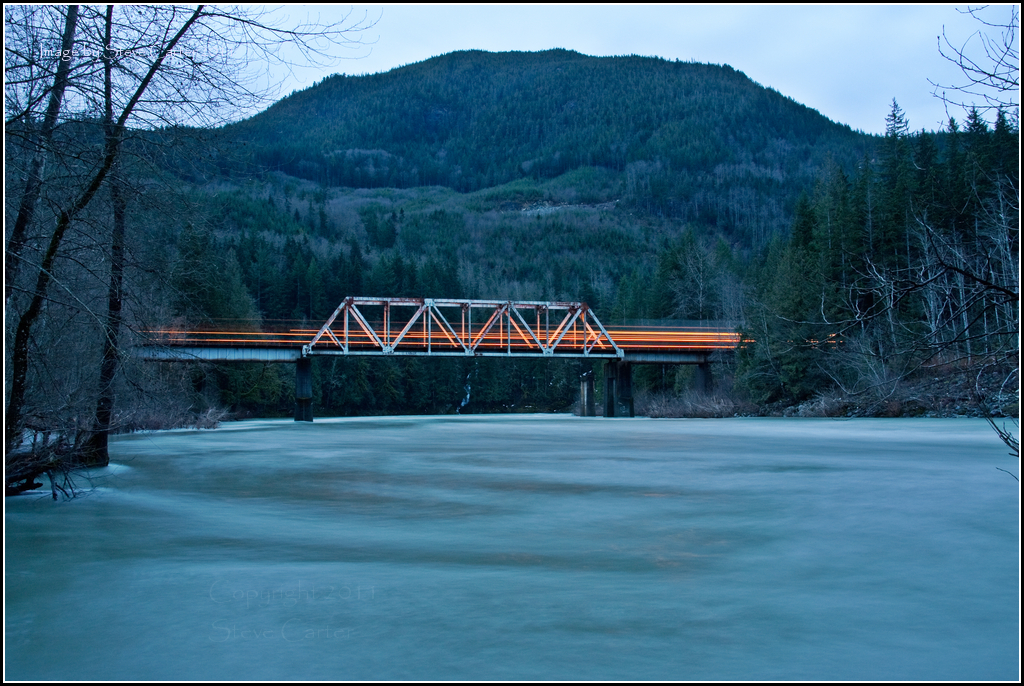 A little later I paced the Builder near Grotto. Saturday afternoon before the rain started I got this Z train near Miller River on the Skykomish. 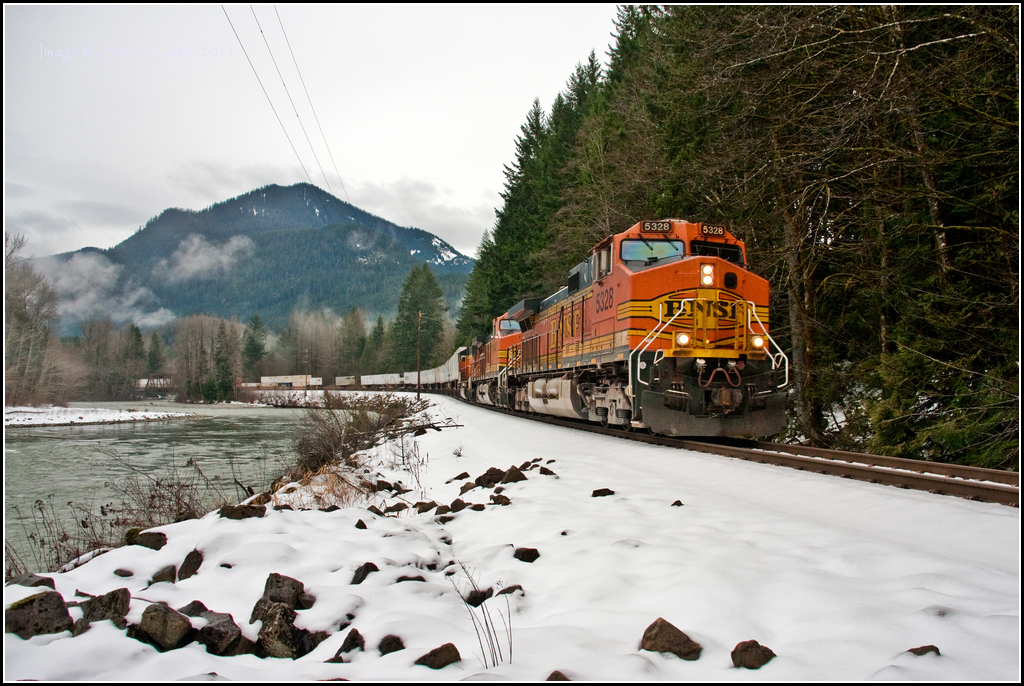 A "three points of light" fog/bridge shot. Over the Skykomish river west of Sky. 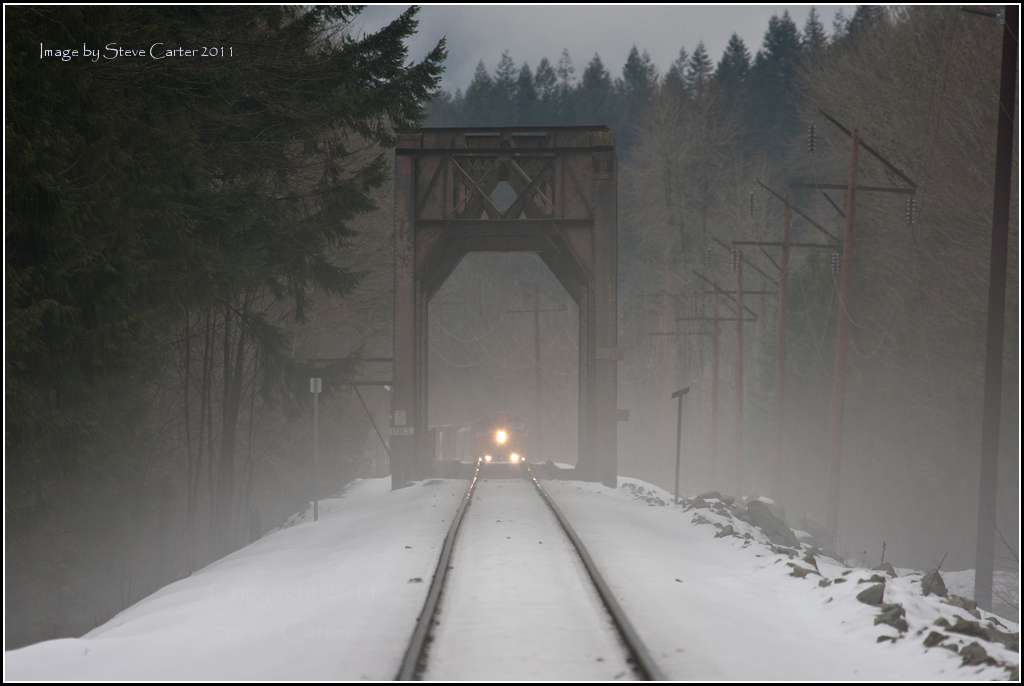 The creek falls at Foss River. 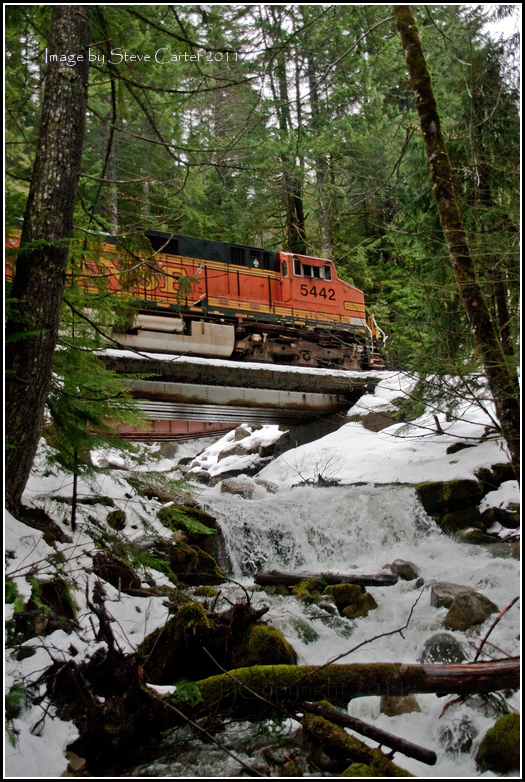 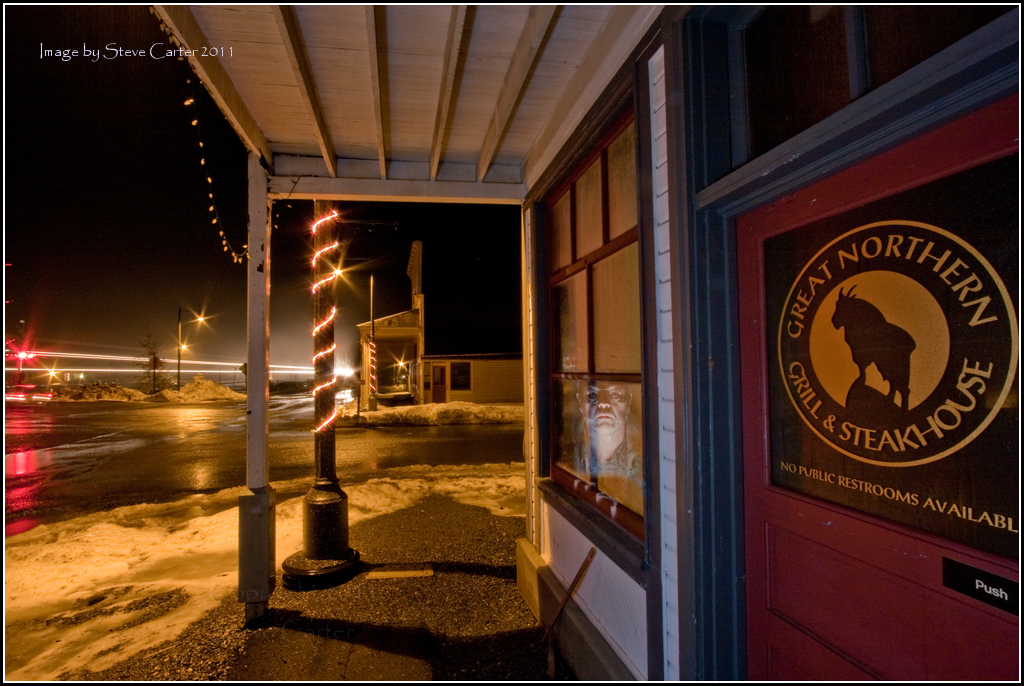 Sunday morning I got the Builder back at Gold Bar, with the river approaching flood stage. I stood between the two trees Saturday morning for the shot above. Saved my favorite for last. Friday night after "the stuck in the snow" incident at Foss River Bridge, and after everybody gave up. Instead of the freight I was expecting, I got the Builder instead with a much nicer light show. 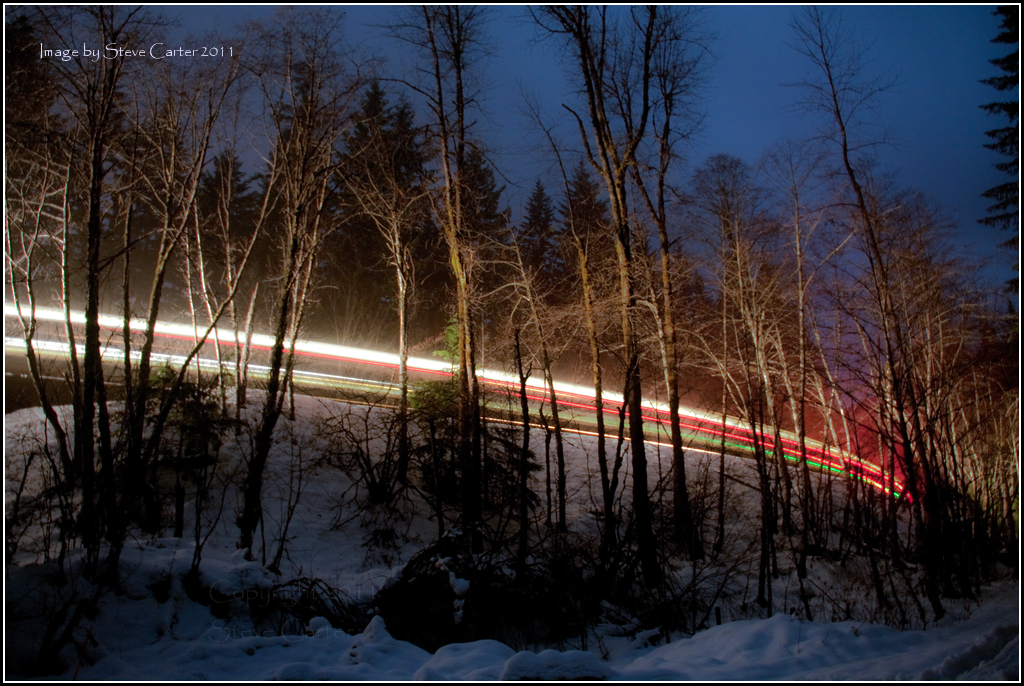 The video was fantastic - one of the best i've seen - well done!!
It was wonderful to see some of the locations again that I explored in 2002 when I last went to the USA.

Steve - Very Nice!! I like the new spot near Miller River. Also glad to see I'm not the only one still living in 2010

Steve - Very Nice!! I like the new spot near Miller River. Also glad to see I'm not the only one still living in 2010
Click to expand...

Damn automated software that can't tell what year it is!!!
E

What's the story on that ghost image?

DelmonteX said:
Damn automated software that can't tell what year it is!!!
Click to expand...

Steve while you're fixing the primary copyright tag, take a look at the secondary, it's reading 2009.

Steve - Very Nice!! I like the new spot near Miller River. Also glad to see I'm not the only one still living in 2010
Click to expand...

I forgot that was even there.

ES44AC said:
What's the story on that ghost image?
Click to expand...

Created for the Chief's benefit. You know that building supposed to be haunted right?

DelmonteX - Great shots all around, but that fist shot is really cool. I like the dashed lights of the crossing arms going up and down. Typically on these shots all three lights on the arm are blurs of red. Really cool.

Despite the less than ideal snow conditions this was still a fun weekend. There were plenty of trains on Friday and Saturday we kept busy despite the slower traffic.

There was still plenty of snow on the ground which made for some interesting images. The high moisture content in the air certainly added some interest as Ross and Steve's photos show. I'm looking forward to next year!

1. On Thursday night, my travelling partners Robert Scott and Scott Lothes drove down to the Miller River bridge west of Skykomish to attempt a photo of an eastbound freight climbing up from Baring. That evening the Miller river was already over its banks with overflow crossing the Old Cascade highway in a dip. Just like the desert southwest washes this dip allows the excess flow of the river to cross the road without destroying the it. I’m sure this is a much more cost effective means to handle the occasional flood on such a lightly used road. By Friday evening the road was officially closed though many locals and law enforcement forded the deluge in the dip anyway. Of course the early 20th century era railroad bridge was not affected by the high water

2. In the past few weeks BNSF has moved a number of westbound baretable trains to the Port of Seattle. It seems one moves every third day. These equipment repositioning moves help the railroad reposition cars when the movement of containers is not equivalent eastbound and westbound. While these moves don’t generate any revenue they are certainly necessary so that the next revenue generating train can run.

3. On Stevens Pass Amtrak’s Empire Builder (trian #7) usually arrives westbound around 7am. In the summer a good sunrise photo can be made of this train but in the winter it is still over an hour before good daylight. On 1/14/2011 Amtrak met an eastbound freight at Merritt and then began its ascent of the hill. At 7:10am it passed through the area known as “The Slot” illuminating its surroundings with the artificial light from the headlight briefly bringing a brightness to a deep canyon in the Cascades.

4. Dark shadows are the only thing on the fruit trees west of Monitor, Wa. In about 4 1/2 months the trees will be in a splendid bloom and by early September the harvest will take place. The cold, snow, ice, and low winter sun will long be forgotten by then. Soon after though the cycle of the seasons will kick in again and winter will be back. 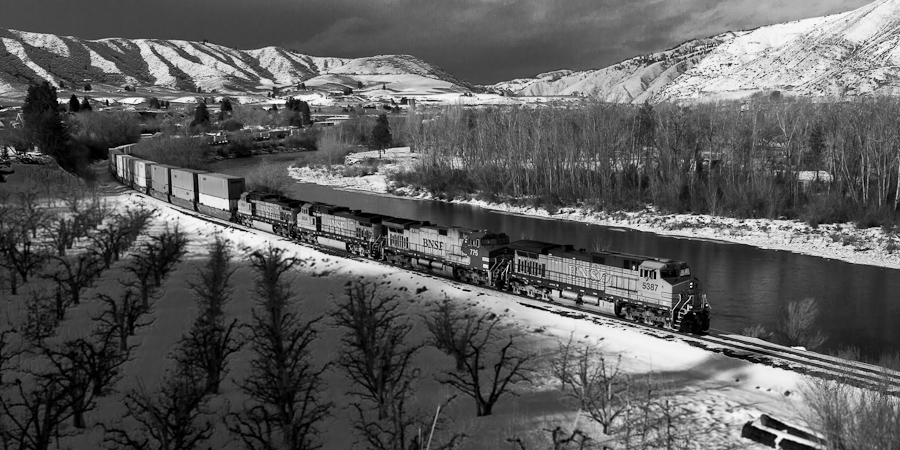 5. For the past few years the Tracks in the Snow crew stayed at the Cascadia Inn in Skykomish. Henry and his crew do an exceptional job of taking care of us and catering to our needs. The hotel is always very clean, the food very good (especially the prime rib special!), and the drinks plentiful. On top of that the staff is very friendly and welcoming to our group. On Friday night after a wonderful Salmon dinner with couscous, green beans, and garlic bread I stepped outside to capture the hotel while a rolling meet took place in the Skykomish siding.

Very nice Steve!! I love that shot at Miller River and still can't believe you guys found so much sun on Friday. The shot at Monitor is great!

Consistently great photos from everyone.