Was migrating from one computer to another and found these old shots from a trip I took a couple of years ago. The Port of Tilamook Bay up in Oregon had these old SD-9s parked out by an airplane hangar. I don't know if they are still up there, but it was a fun trip (and if you are ever there, be sure to take the free tour at the Tillamook Cheese factory!). It's not hard to figure out who the former owner of these units was. 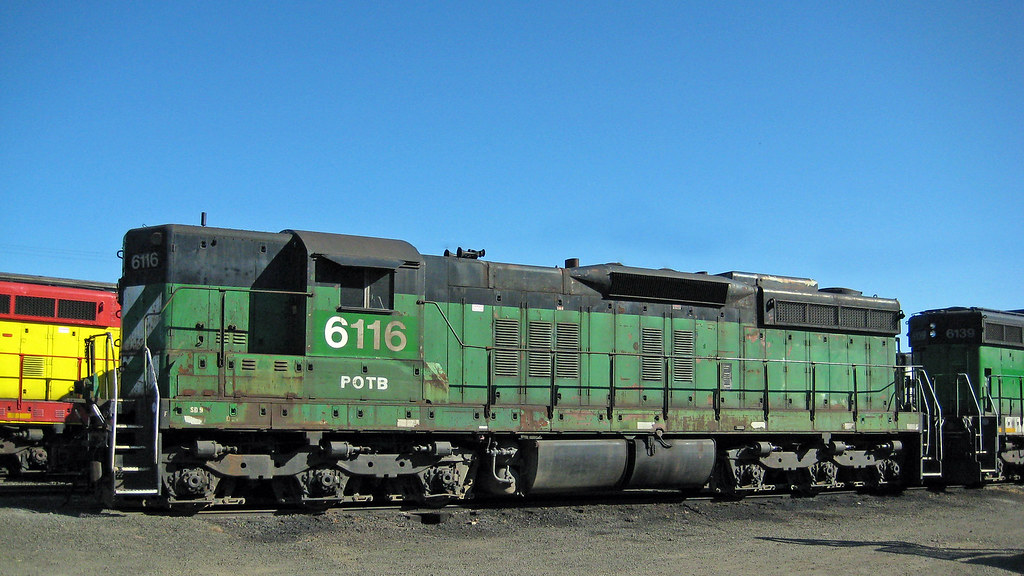 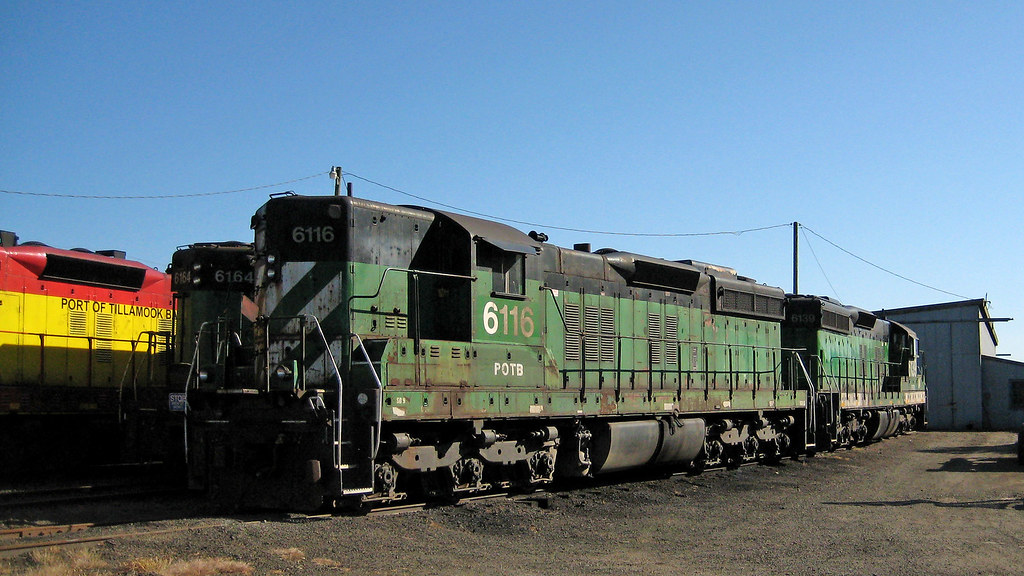 Great shots...I think that most of these SD-9's have been cut up now...at least a couple have for sure been scrapped...
I sure miss that railroad..They were a hoot to chase...Lotsa great angles and some great trains...
They were going pretty strong before the big storm destroyed them...on the average, they were running thirty car trains...sounded great behind 3 SD-9's up on the hill...
G.D.

Most if not all have been cut up for scrap. SD 9's and 7's were some of my favorite locomotives. I was Tillamook for my nephews wedding. It is a neat place to see and you are right the cheese is good. We have Tillamook cheese in our local grocery store here in Omaha. TZ

Too bad to hear they are gone. They were one of my faves to watch too. At least I still have a couple in HO. Well I am glad I went exploring around that day then and got the shots.

Too bad to learn that the Railroad is no more as well. The short line here where I live is going ganbusters (the Richmond Pacific RR). I should have some pics up soon of them in action on my East Bay Railraoding thread.

The POTB sold to scrap all but four locomotives. Amazingly three of them are in your pictures, 6116-6139-3164. 101, the cow painted locomotive, was purchased by on of OCSR's members and in now in Garibaldi and used on the dinner trains with ex-GN F7 #274.
T

4 locomotives is pretty good. I used to call those old SD9's "rattle wagons". They were pretty popular here in Denver and were used to switch many industries around town. I am not sure what happened with the POTB. I remember reading they were eligible for something like 30 million in disaster relief money from the Federal government to help rebuild their railroad but they had no interest in it at all. Very strange indeed.

Tacoma Tom said:
I am not sure what happened with the POTB. I remember reading they were eligible for something like 30 million in disaster relief money from the Federal government to help rebuild their railroad but they had no interest in it at all. Very strange indeed.
Click to expand...

It was NOT a metter of no interest...rather it came down to a matter of ability. POTB did get a large amount of FEMA money for the storm damage, but the catch is that the Federal money only pays for something like 75% of the repair costs, and POTB has to secure the rest on their own. Problem was that no one had that kind of money, not POTB, not the state, nor anyone else, and a lot of people questioned the feasibility of rebuilding the railroad yet again. Remember that this would have been something like the second or third time the POTB required major repairs to fix storm damage over the span of a decade, and there were no guarantees that rebuilding the railroad this time would not result in another rebuild being needed after the next storm.

When it came down to it, governments at all levels in Oregon are hurting just as bad as governments everywhere else. When politicians are forced to make unpalitable and highly unpopular cuts in government services, spending money they don't have on something like the POTB is a non-starter. No matching local monies equals no railroad repairs, simple as that. I seem to remember that POTB applied the FEMA money to various improvements in their non-rail assetts.

To top it all off, the railroad was economically a very marginal operation. Some healthy trains, yes, but nowhere near enough to sustain or justify continued operations- especially on a property as expensive to maintain as the one they had.

In the meantime, go ride the Oregon Coast Scenic. They have an outstanding operation going on the coast and deserve all the business they can get.

http://www.trainweb.org/potb/news.html
Also, according to a recent article in the Oregonian, repair estimates to get the POTB back up and running have topped $57 million, or about three times the original estimate, and aproximately 38 years worth of gross income.

​
Sorry but to spend that amount of money with a 38 year payback, with the likely prospect of additional storm damage and other capital costs needed within the same timeframe (think major bridge and tunnel maintenance, replacing a well worn locomotive fleet...)... It's just not feasible to ask taxpayers once again to pay for yet another bailout of a railroad that has such huge costs and such low returns.

The fact that not one single company closed up shop due to the lack of rail access (and in particular, Hampton Lumber's Tillamook mill continued to operate while Hampton had shut down their Willamina mill for several months due to poor economic conditions; the P&W's Willamina District had been recently upgraded with CWR and new ties.) The TCCA complained that higher transport costs for feed for cows would result in increased cheese costs; but then Fred Meyer kept the price of a baby loaf of Tillamook Cheese at $5.99 for nearly two years - maybe Kroger's increased volume made up the difference.

Is there any tourist train potential for what's left of the line? I would love to take an excursion over some of those trestles, and through some of those tunnels.

If there is no rail access to either end of the line, then one could truck in a small loco and excursion coach.

A realistic idea or not?

By the way, I noticed a small, kind of unusual passenger coach on Craigslist. This kind of car would be easy to truck in to a location, seems to me.
http://seattle.craigslist.org/sno/bks/2589140569.html

Unfortunatly the Salmonberry Canyon is completelty inaccessable except by foot. There are no road into the canyon and the track are cut off on both ends.

Oregon Coast Scenic Railroad is operating on the coastal side of the washouts, with offering between Garibaldi and Rockaway Beach and occasionally Wheeler. There are plans to expand the operation to include Tillamook and some of the trackage along the Nehalem River. These plans are several years out since the tracks have been dormant for almost four years.

I suppose it is possible that trains could operate betwen Banks and Cochran. This would take a good investment to reopen the line. Also considering the round trip is 5 hours or better are there enough people to ride all day at 10MPH to support such an operation.?

Ragnar said:
Is there any tourist train potential for what's left of the line? I would love to take an excursion over some of those trestles, and through some of those tunnels.

If there is no rail access to either end of the line, then one could truck in a small loco and excursion coach.

A realistic idea or not?

By the way, I noticed a small, kind of unusual passenger coach on Craigslist. This kind of car would be easy to truck in to a location, seems to me.
http://seattle.craigslist.org/sno/bks/2589140569.html
Click to expand...

Aaron can give better details as to where the major storm damage is...but the part of the line you speak of is the most heavily damaged part, and I find it hard to see (given how remote that area is) how you could realistically draw enough people into that country to make a viable tourist operation.

Thanks a lot for the replies.

I didn't realize that Salmonberry Canyon is totally inaccessible. I guess that means the old tracks in there may not get removed for a while -- if ever.

The Foamer In Hillsboro

During our visit to the OCSR yesterday, we visted the POTB yard and captured some stuff on video - http://www.youtube.com/watch?v=Ecjnlmewuqo

It was a sad sight to see what was over there...