The Derailment of the IG3OA

What a day and what a mess it turned out to be this past Sunday on Donner. My girlfriend and I decided to head up the mountain for her first railfanning adventure. On I-80 east at Long Ravine we passed under a stacker that turned out to be the fateful IG3OA. It was too late for me to jump off the freeway, so I decided that I was going to continue to Gold Run to shoot the ZG2LT that was hot on the rails behind the IG3. All of that changed when I heard the defect detector squawk that there was a defect and followed almost immediately after by the DS calling the head of the IG3 and advising them that he now had a track indication on MT2 and he feared that they were on the ground somewhere.

He was right indeed… They were on the ground and right at the main crossing in downtown Colfax, Ca. I arrived less than five minutes after the derailment and just as first responders were arriving on scene. CalFire was quite concerned that there was a HazMat incident as one of the containers was leaking an unidentified clear solution and began their HazMat procedures just in case (the crew had already verified that there was no HazMat in those containers on their paperwork and with Omaha). The container was filled with animal hides being shipped in brine which was the leaking fluid. Once the HazMat warning was issued, everyone got a quick boot from the area and road closures went into place. 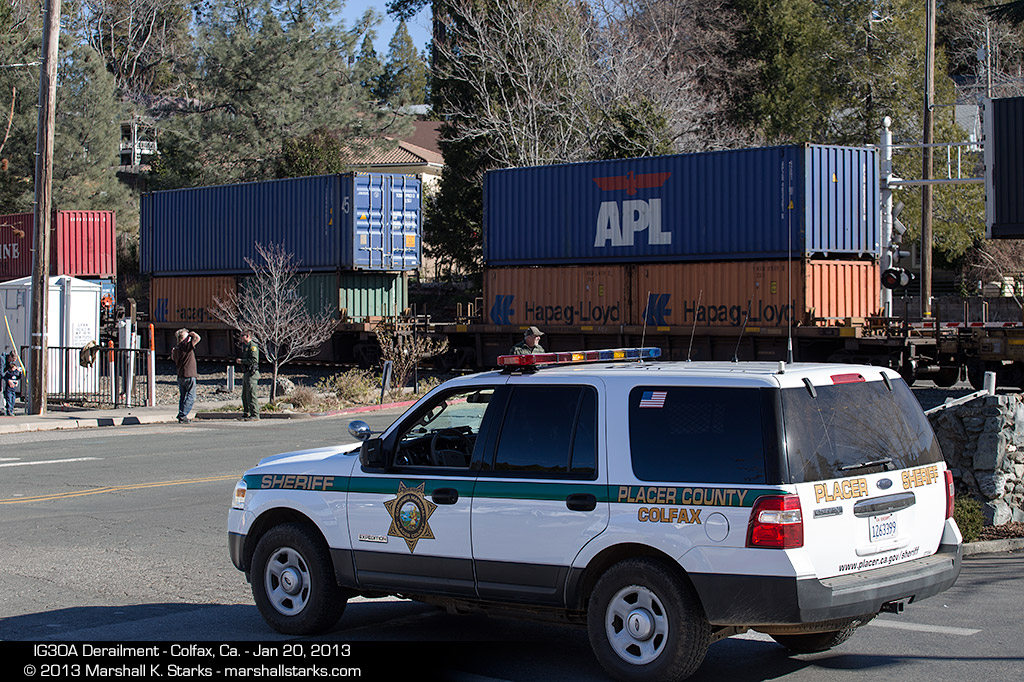 2. The unlucky conductor walking back to see exactly how much of a mess there was. 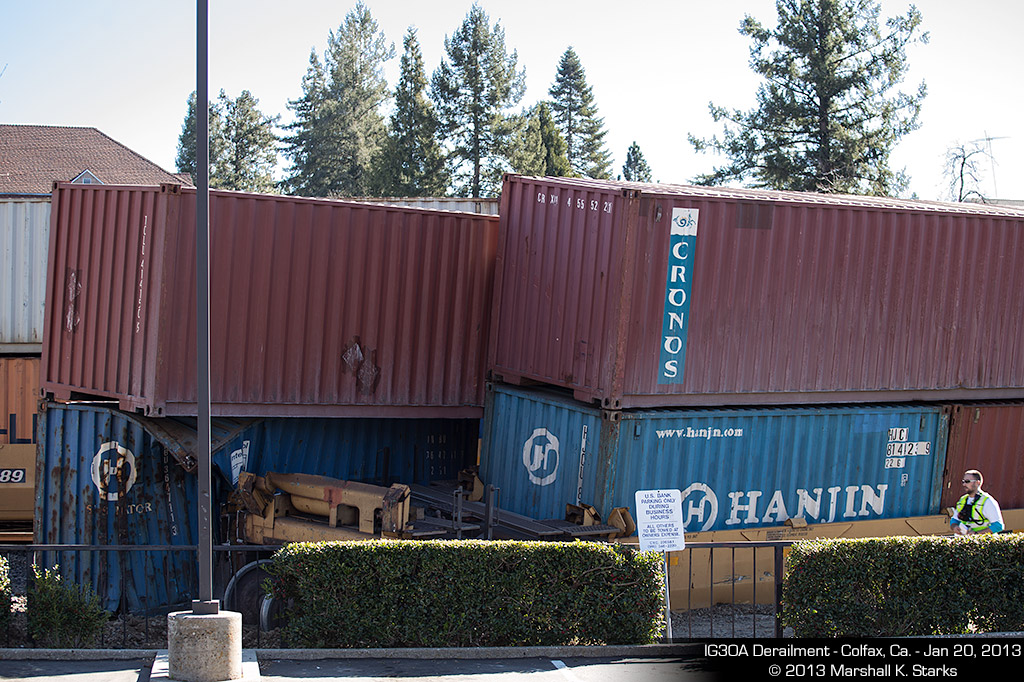 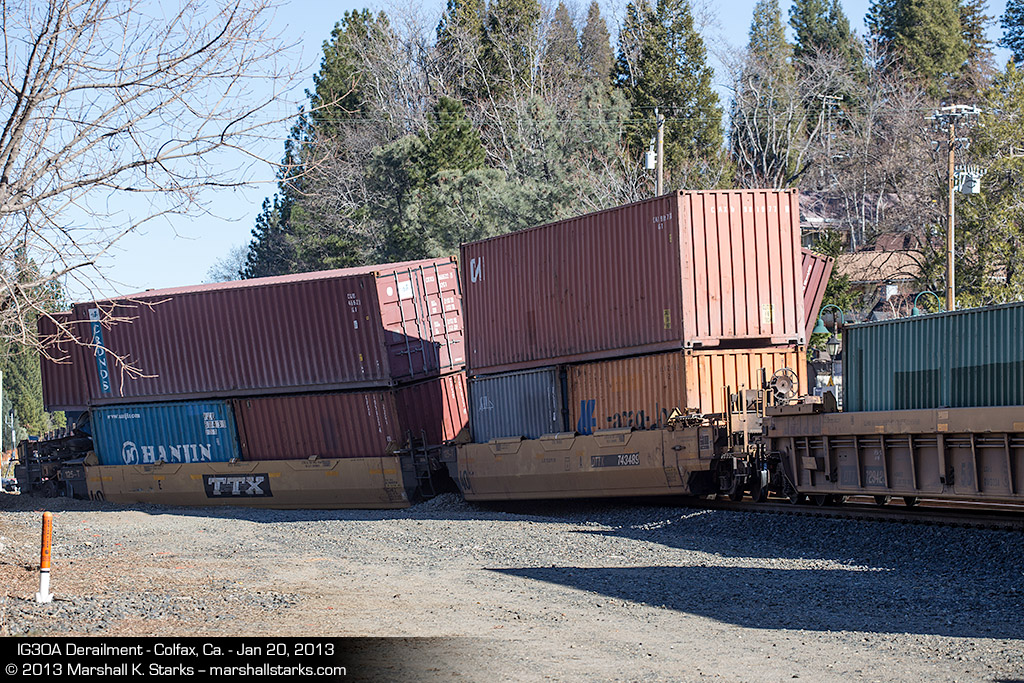 4. CalFire personnel rush to get an idea of what the HazMat is. 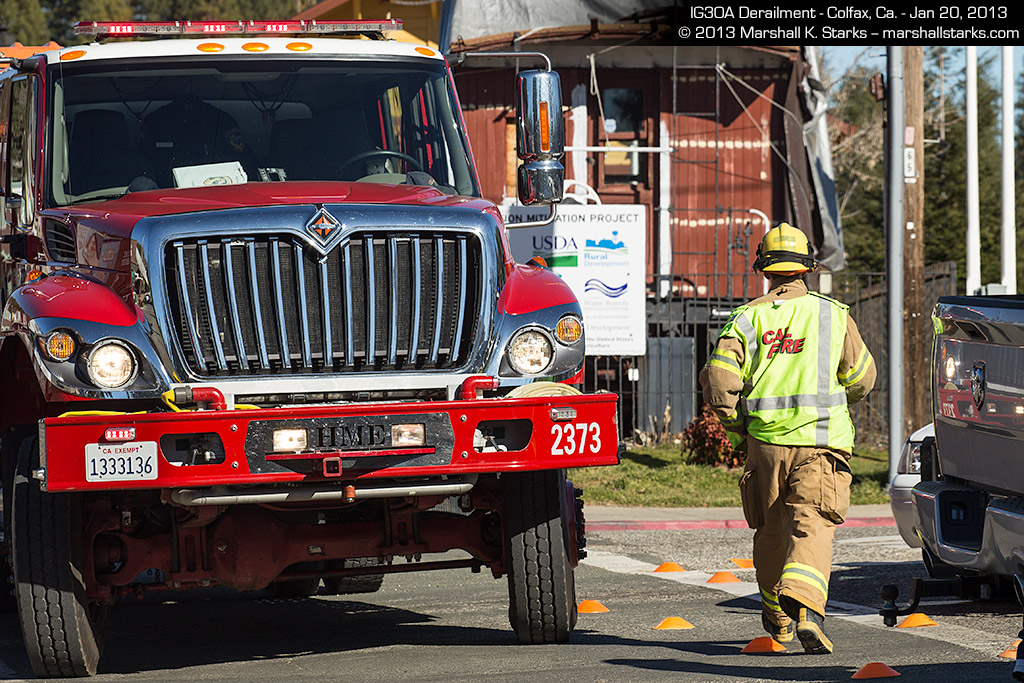 5. The view from the east end of town. 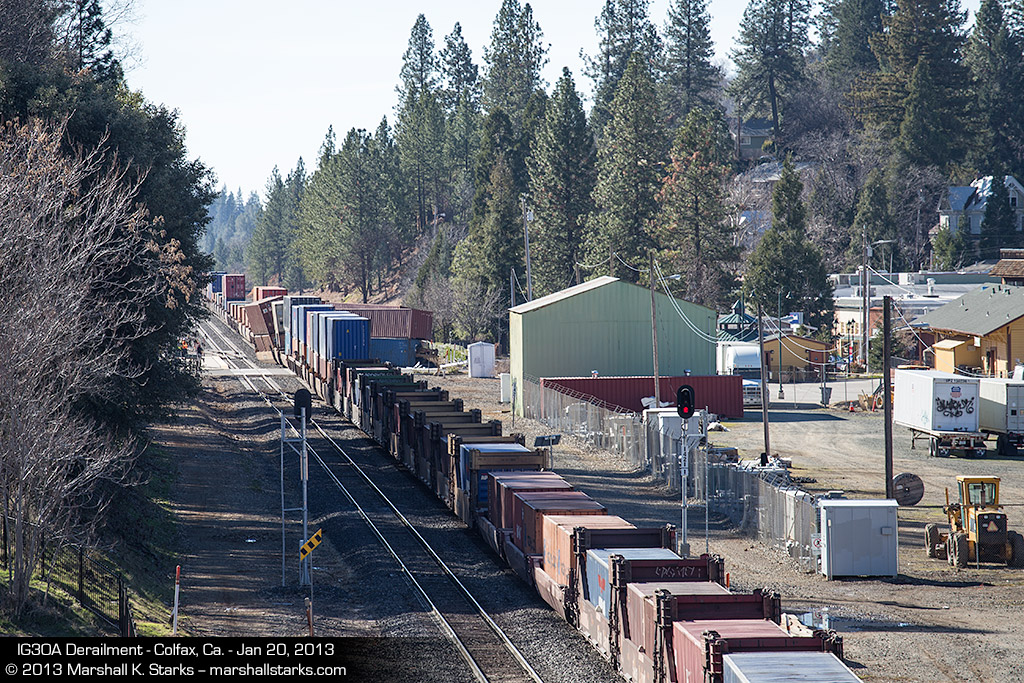 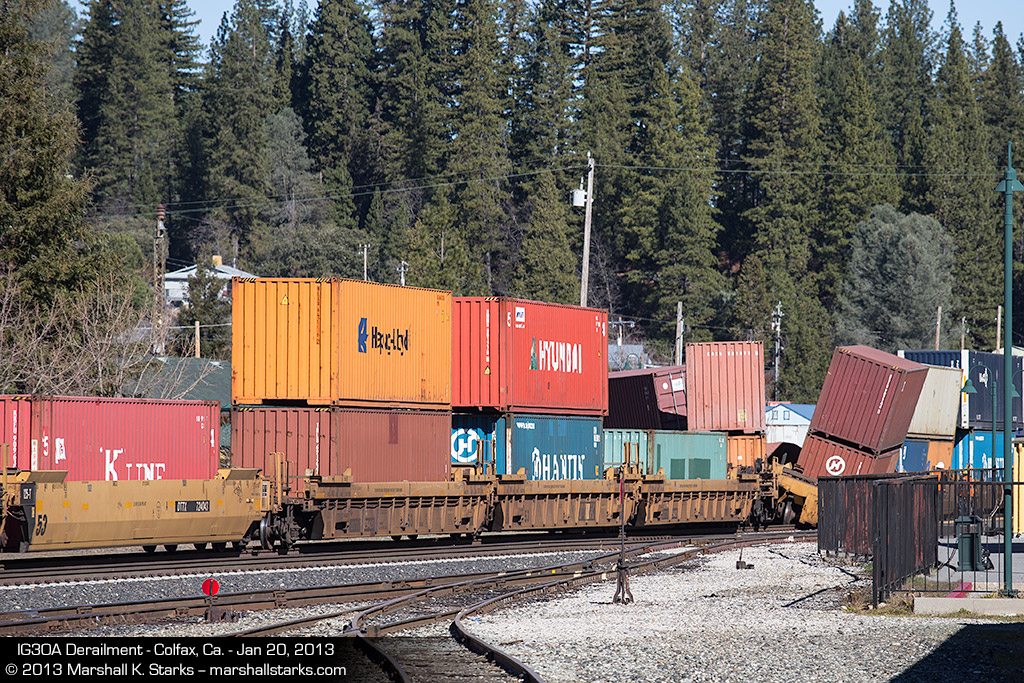 After grabbing the shots in town, we headed to Carpenter Road to see just exactly how much of the train was on the ground. After we arrived, we quickly discovered how far back the initial point of derailment was as opposed to where the mess finally piled up.

7. Damage to the concrete crossing pad from the wheelset striking it. 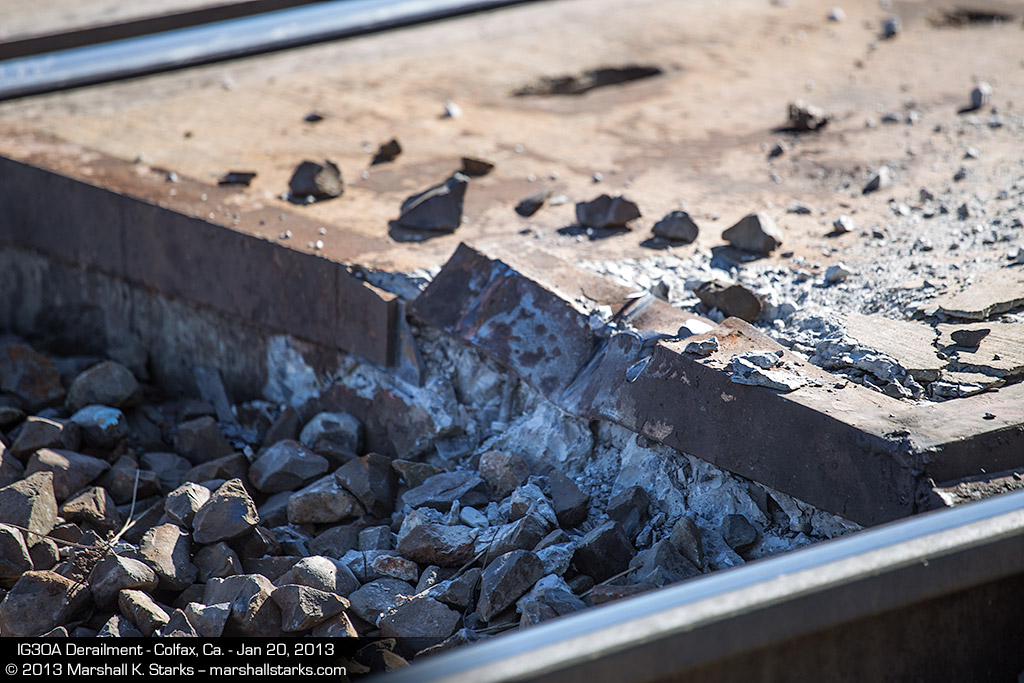 8. Truck springs and other debris litter the ROW. Per a UP Foreman who arrived after I did there were 21 springs located on the ROW between Carpenter Road and the DPU which was 1/4 mile away to the west. 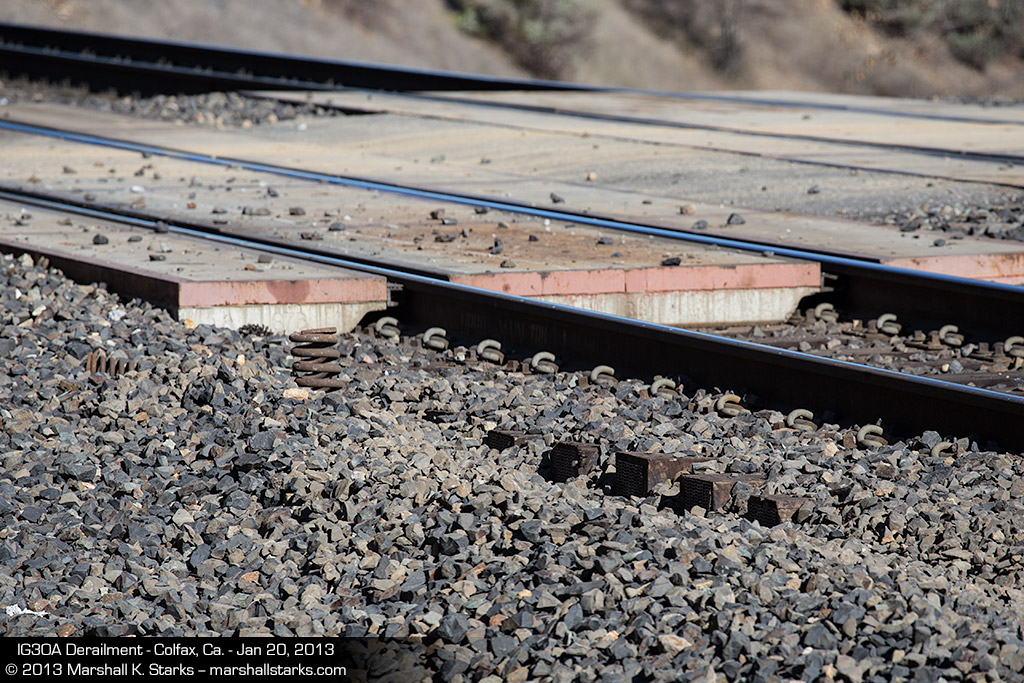 9. Another UP Foreman (not the employee in this photo) stated that "It looks like someone stacked three tie plates on top of the rail 10 ft west of the 80 overpass. After that point is where all the carnage begins. UP SA is on the way." So he was, and he arrived in quick fashion and began the investigation as he walked all the way over to the initial POD. 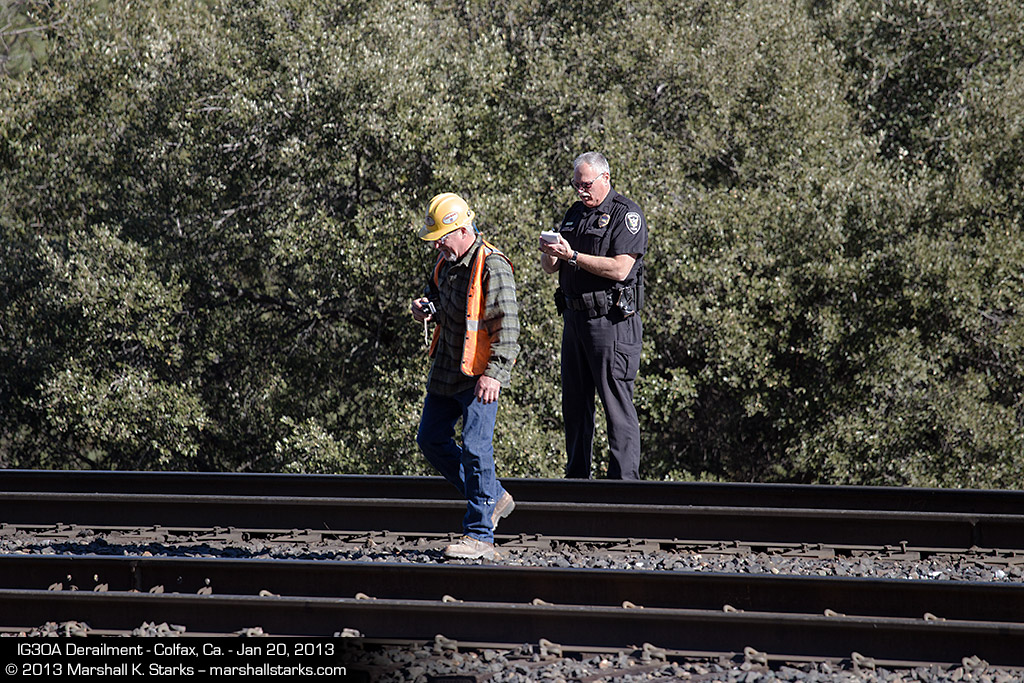 10. UP employees meet to discuss the damage and what will need to be done to get the railroad up and running asap. 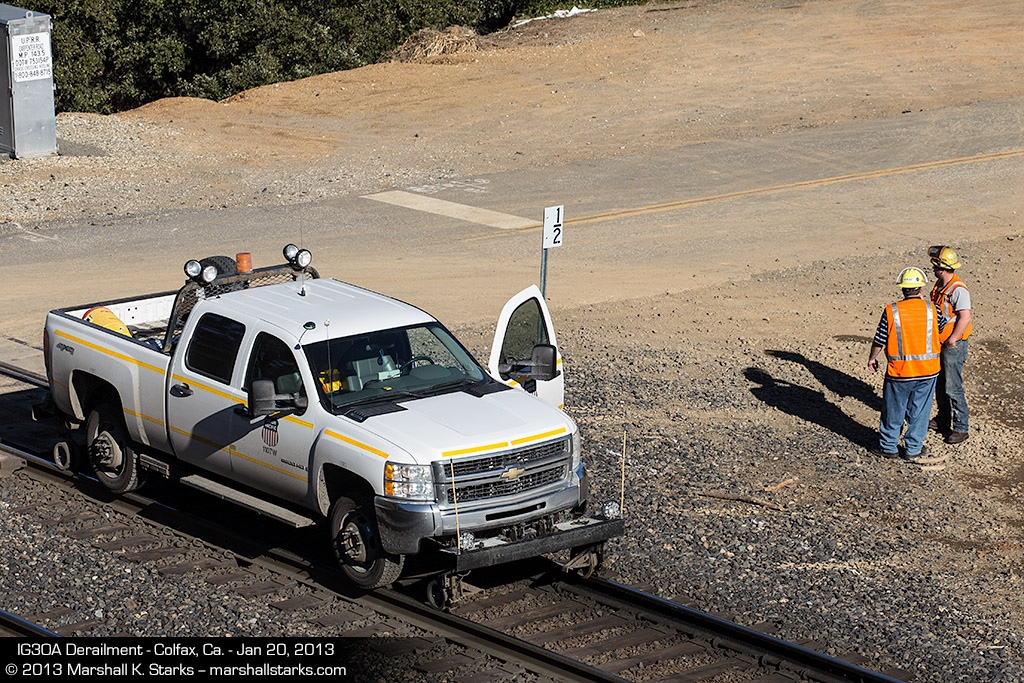 11. Amtrak was very proactive during the whole situation and should be commended for their efforts. #6 was held at the depot in Roseville, and #5 which was at Towle when it happened was brought down to Gold Run on 2 Track where buses were waiting for the passengers to continue westward. 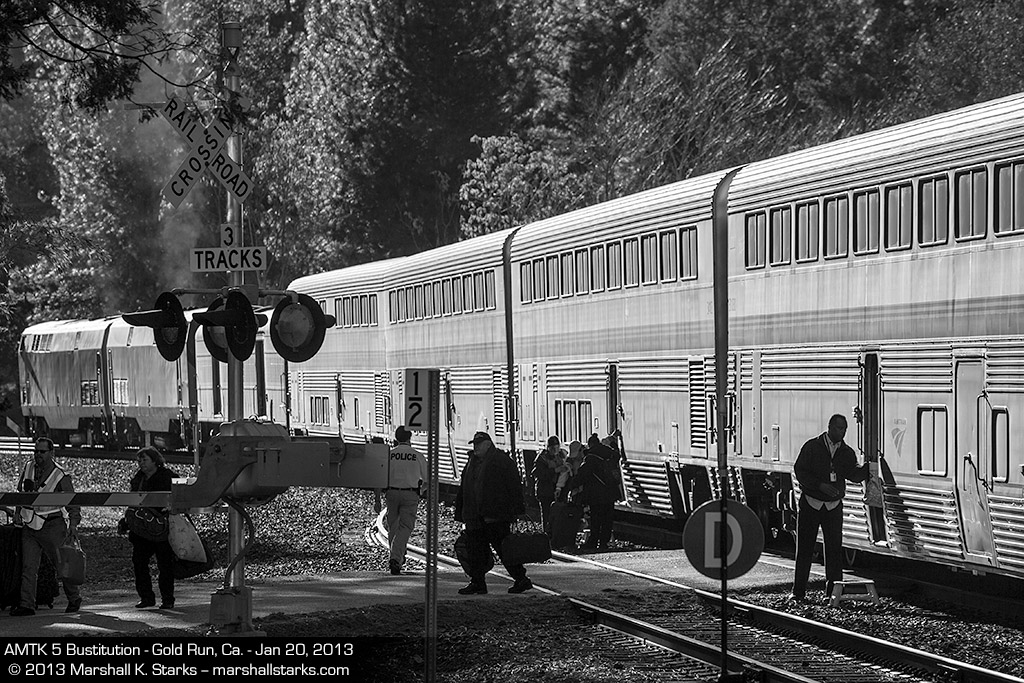 12. Not the day that this employee was hoping for, but he remained friendly and was more than accommodating to the stressed out passengers. 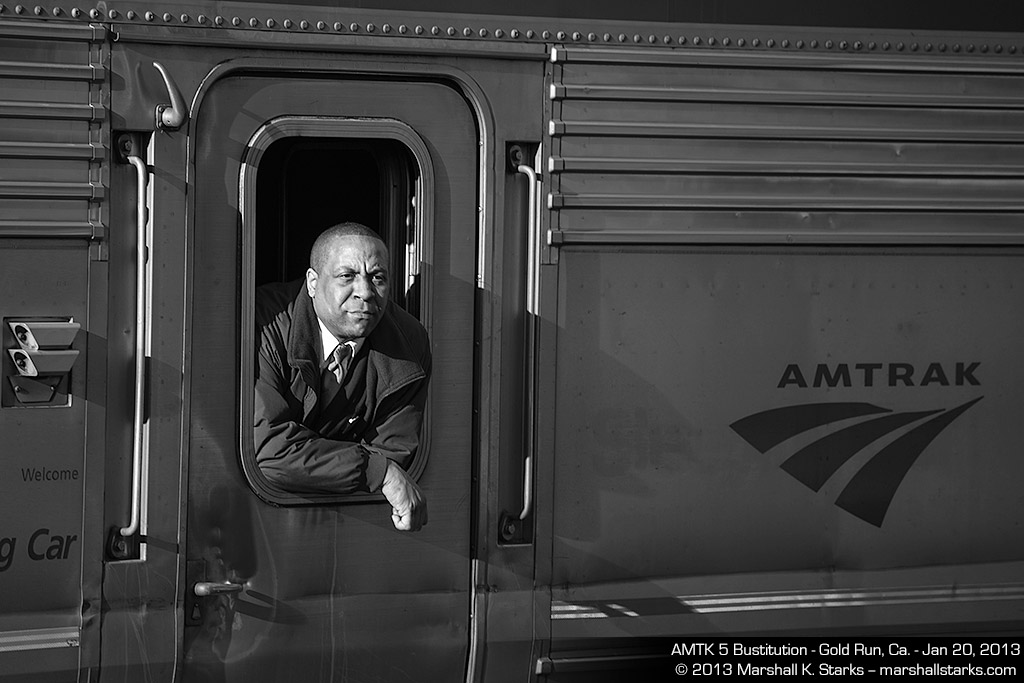 13. UP 7492 has nowhere to go as the crew has tied it down until they get the all clear to move west (which won't come before this crew dies on HOS). 14. With the passengers unloaded, AMTK 5 shoves off MT 2 and into the siding with 7492 waiting as well. 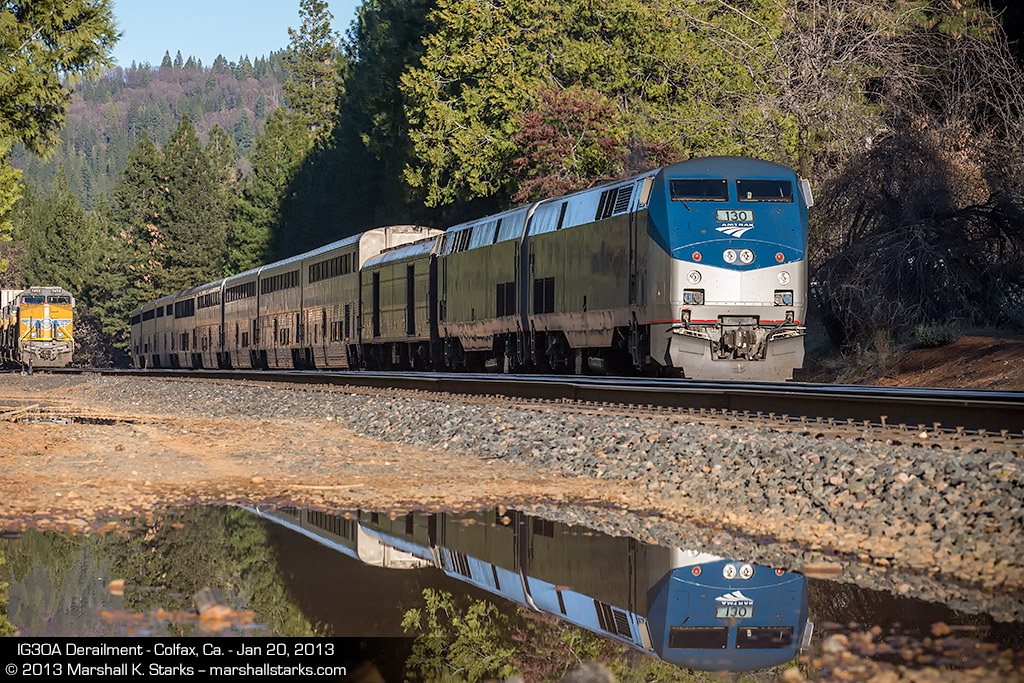 15. Headed back to Colfax to see how progress was coming along. 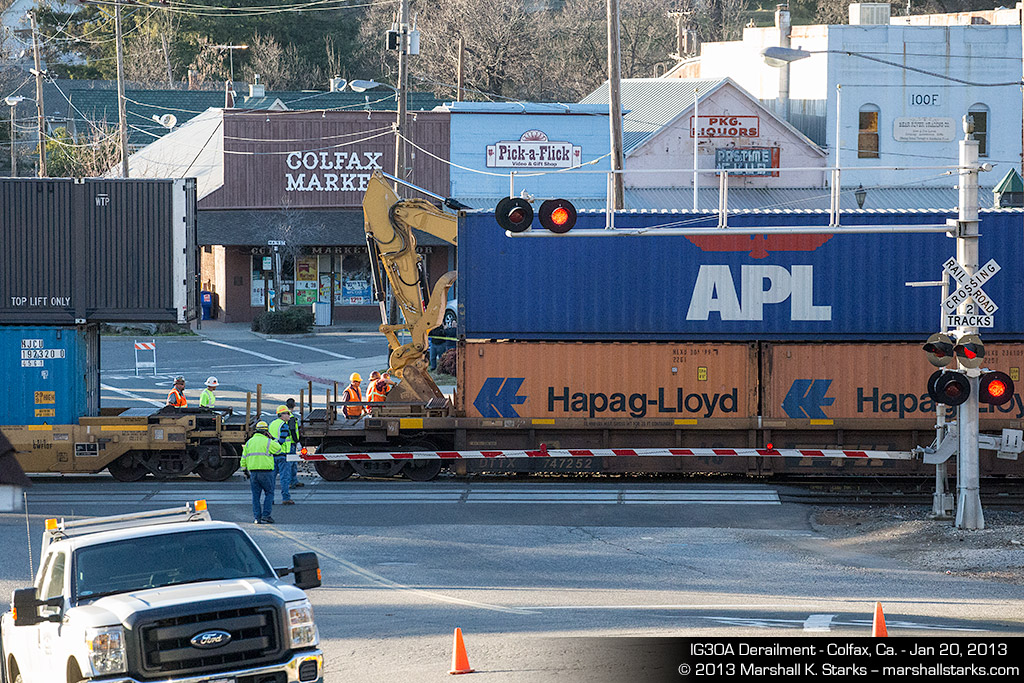 16. I'm not sure this is why the city named it Railroad Street. 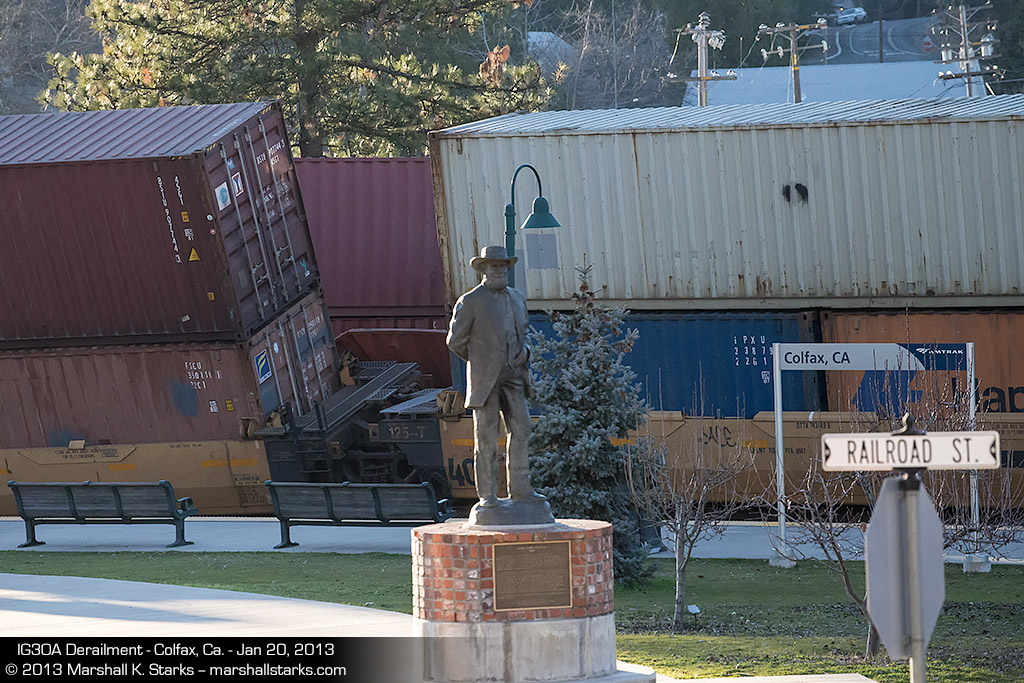 17. A dozer with forks holds up one of the wellcars that has one wedged between it. 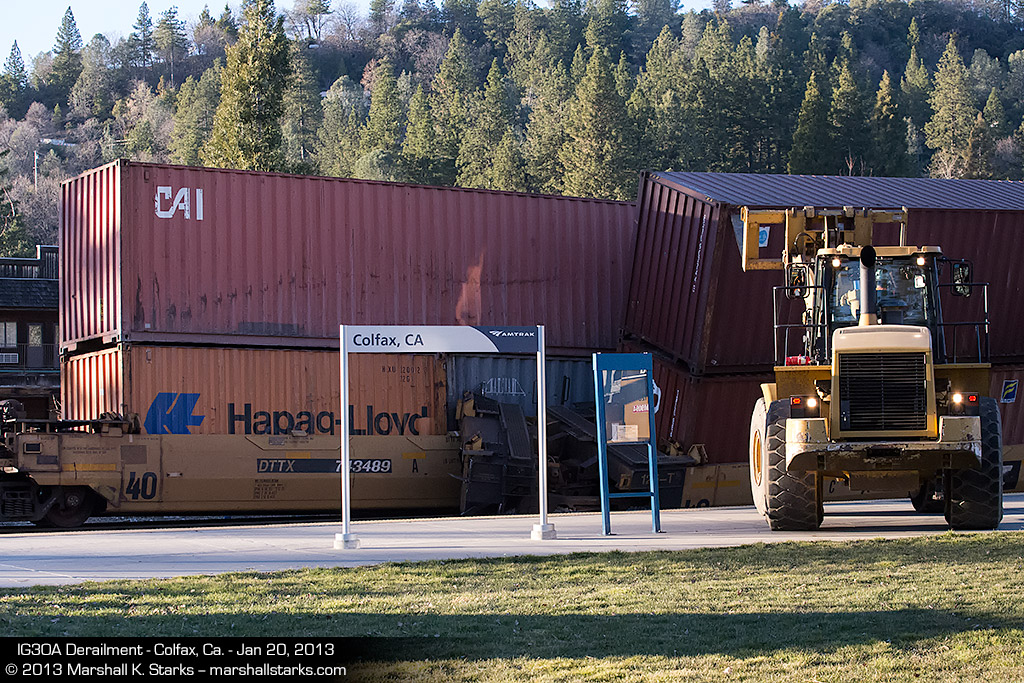 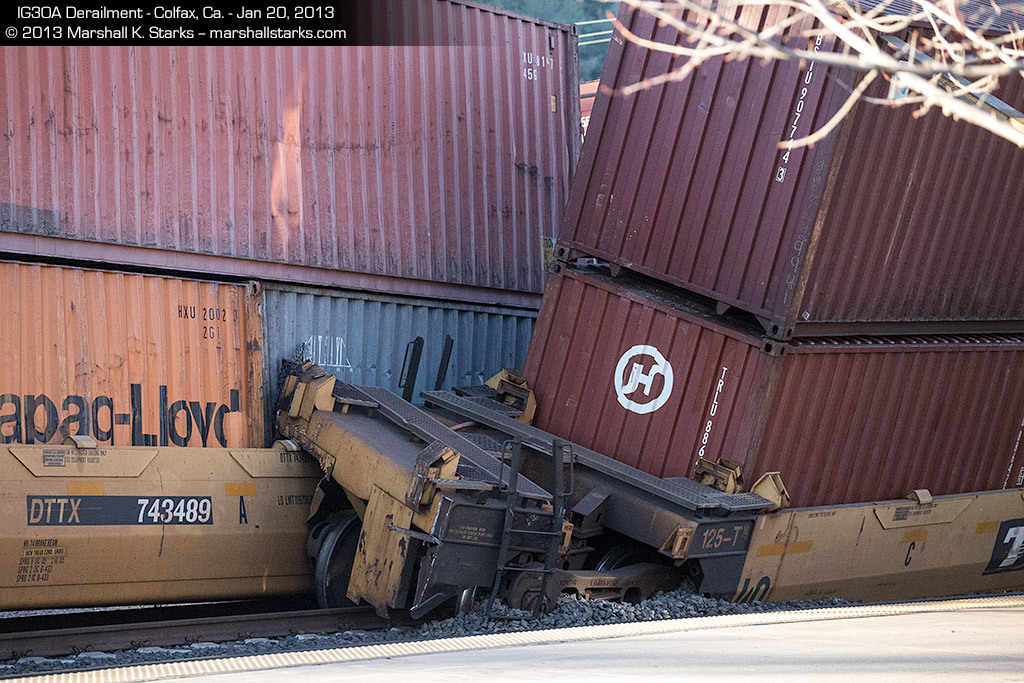 19. A view from a hillside overlooking the cleanup. 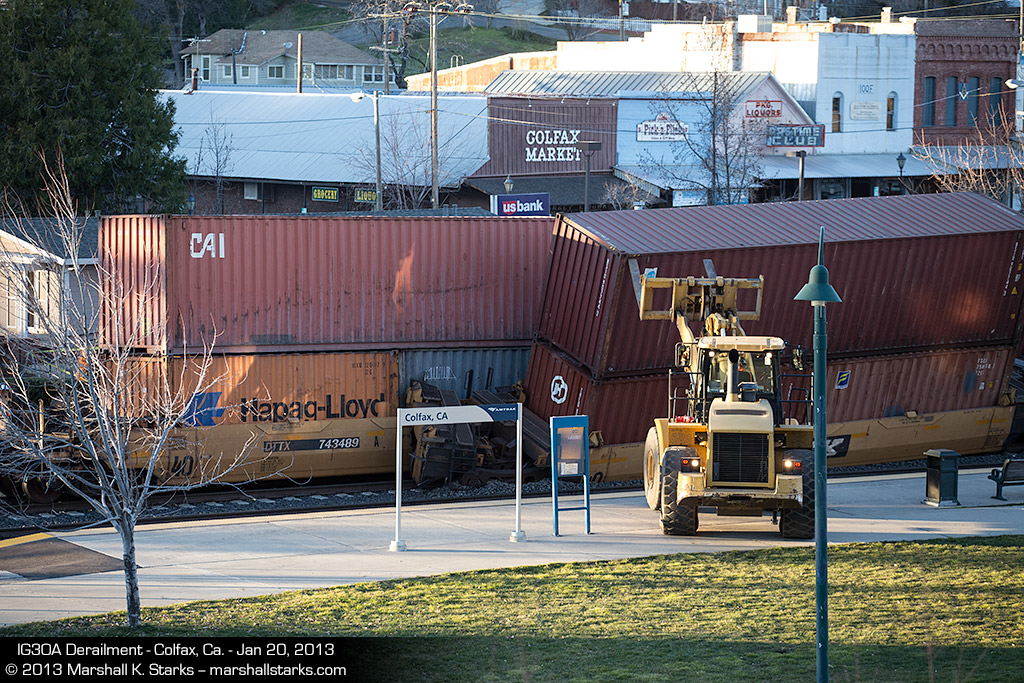 20. Like scraps from an aluminum can, a backhoe pulls one side of a well out of the way. 21. Jim Dobbas and UP employees come up with a gameplan to get the cars off the rails of at least MT 2 so traffic can get moving. 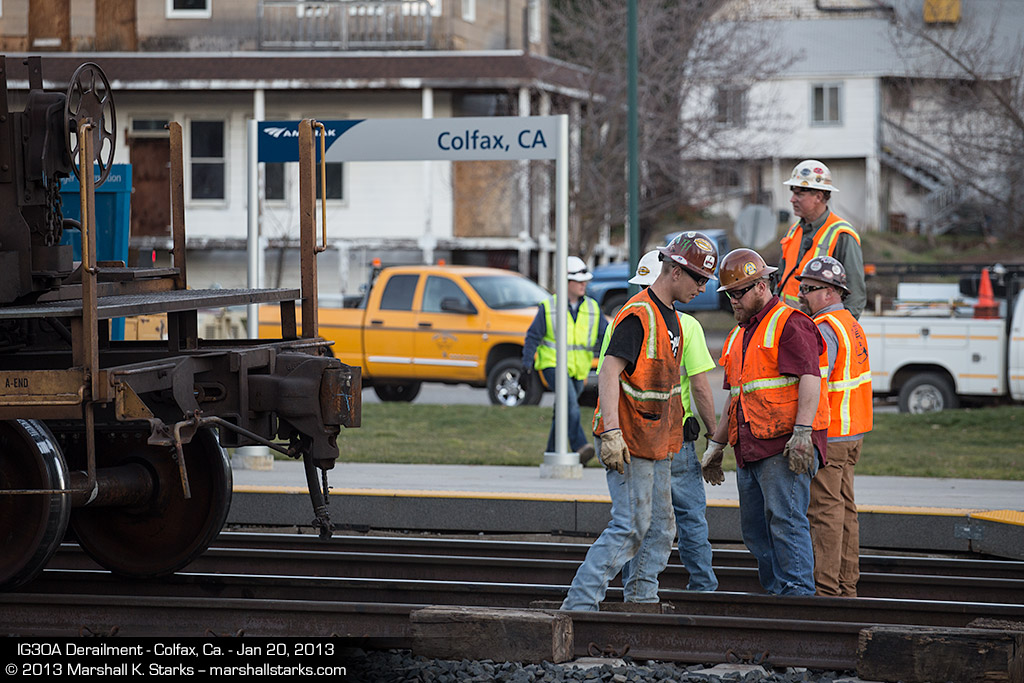 22. Bring in the heavy equipment. 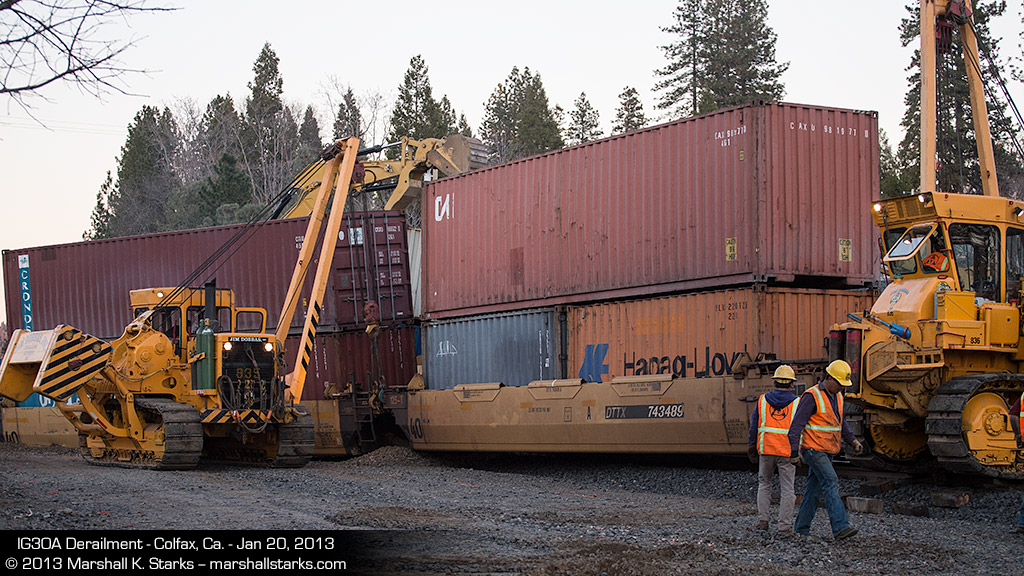 23. Workers burned through the daylight and into the night as they work to clear the rails. 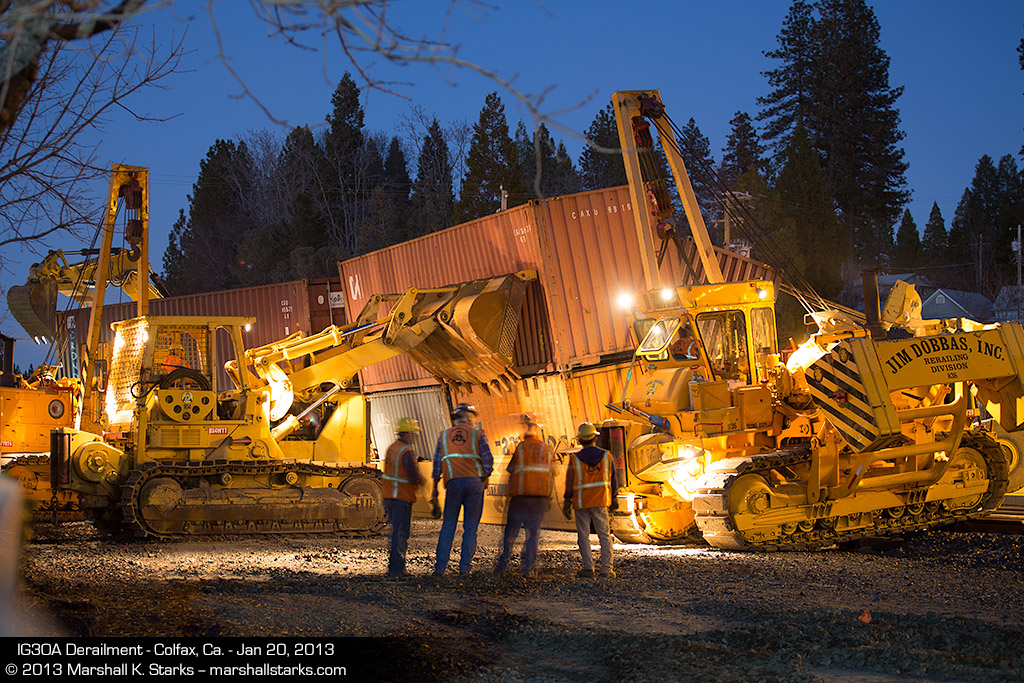 Thanks for viewing and a commendable job by all those involved from the railroad and first responders. It's good to see that even when things go bad, that these guys (and gals) are still on the ball and getting things done.

Great documentation! I am naive of railroad talk. In one of your sentences you stated the railroad employee said someone stacked something on the track west of 80. Was this train sabotaged?

WhoWantsTrained said:
Great documentation! I am naive of railroad talk. In one of your sentences you stated the railroad employee said someone stacked something on the track west of 80. Was this train sabotaged?
Click to expand...

Unknown at this time, there's several things that could explain it at the moment, something stacked on the tracks having the least merit as the head end units would've knocked it off. Metal fatigue is a more likely one, or a bolster pin had come off under one of the articulated well car sets. There was one set of well cars that was 7 units ahead of the derailed cars that was missing a set of trucks but remained drawbar connected. They spent a good while trying to find the trucks, though I'm not sure they found them before I left.

Great report. The Sacramento Bee and the local Sacramento TV stations could not have done any better.

I lived in Sacramento from 1973-83 and railfanned the area. Two of the girls I was dating at the time accompanied me on various rail photo trips. I hope your girlfriend was tolerant of your change in plans.

When I lived in Sacramento, I took a few slides of eastbound freights and Amtrak passing over a high trestle in Colfax. I really should purchase a scanner so I can post up those old slides for the benefit of you young whipper snappers.

Back in my Sacramento days, there were still separate uphill (eastbound) and downhill (westbound) mainlines on the west side of Donner summit. I know that the UP has abandoned much of the second track of the old SP double track mainline. Is the section through Colfax still double tracked or has the derailment blocked the only track through town?

Sacramento is a great area for railfanning. I just couldn't take the heat of those long Cental Valley summers.
Last edited by a moderator: Jan 22, 2013

Bill, I know what you mean about the heat... Born and raised in San Diego, this stuff up here is different, that's for sure.

Most of Donner is double tracked and it's Main 1 for WB, 2 for EB trains unless there's a high & Wide which requires the EB to take 1 track from Bowman - Colfax. Colfax is indeed double track, though this derailment was fouling the number 2 track as well.

Excellent photos and narrative, thanks for sharing!

Jeebus, and to think of all the times I have sat on that platform snapping pics as the trains went by!

Itsed65 said:
Jeebus, and to think of all the times I have sat on that platform snapping pics as the trains went by!

Yeah, there was actually a BBQ going on at the time in the parking lot less than 10 feet away from the site of the derailment... Those people were still shaking when I got there. Definitely not something most people think about when out and about.
You must log in or register to reply here.
Share:
Facebook Twitter Reddit Pinterest Tumblr WhatsApp Email Share Link