A new story posted to RailroadGloryDays.com: The Engine is Royal; the Scenery is Magnificent
BCRail's Royal Hudson and friends. 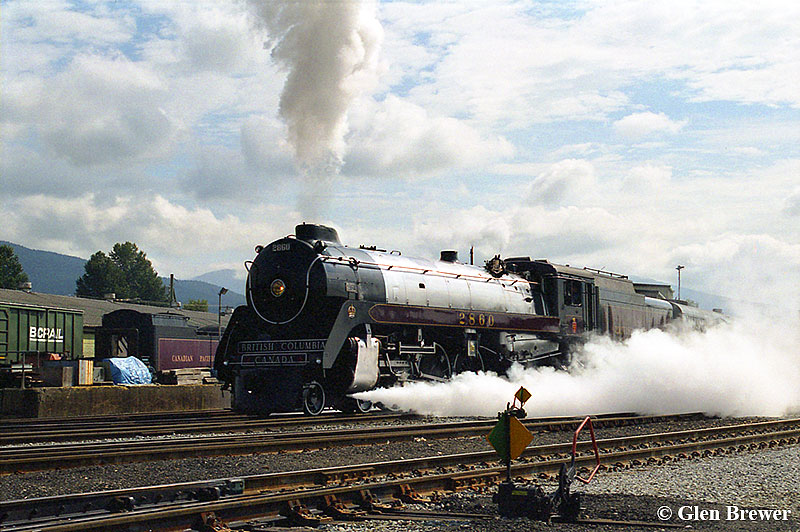 I have traveled all over the United states and Canada and the Royal hudson is with out a doubt the most beautiful locomotive I have ever seen. Canadian Pacific really did a excellent job with the way those locomotives looked. Stainless steel around the boiler, and from what I have been told even the side rods were forged out of stainless steel. The cab had tons of shined brass everywhere you looked. I have very fond memories of going to see the 2860 early in the morning and watching the drivers shine as the sun slowly lit up the locomotive.

When it was in regular operation, riding the train was very fun. Everyone would wave at it when it went by. People used to come out of their houses and business to see it go by. The 2860 was sure a slippery locomotive. You could count on many wheel slips once it started on the many curves out of Vancouver. The steam locomotive was the only locomotive allowed to blow it's whistle through town and the whistle was music to my ears.

I had the opportunity to take a cab ride on both the Royal hudson and the sister engine the 3716. It was one of the highlights of my life. Going through those tunnels, and watching the steam race across the ceiling was like going back in time to the 1950's and something I will never forget. The engineer and the fireman was two of the finest people I have ever met and both had their hearts and soul into those locomotives.

The Royal hudson had a good run. They ran it despite losing money year after year, and would have kept running it because it was something everyone liked and enjoyed. The death of BC rail sealed the fate of the Royal hudson. That along with the Royal hudson down for major firebox repairs. The 3716 took it's place for a while but also suffered problems and didn't have the muscle the 2860 had.

I always felt it was unfortunate that few people knew or experienced the sights and sounds of Canadian steam. Railroads in Canada are terribly underrated. The 2816 usually does a few trips up the Frasier canyon every year and if you have never taken a ride it is worth every penny.

I salute the 2860! One of the Worlds finest steam locomotives.

Thanks, Tom. The train and associated locomotive were an institution around Vancouver, certainly around North Vancouver for just over 25 years. It is too bad that it wasn't continued.
T

I remember they had a large board in the station that used to tally up the number of riders each day of the week. They were averaging around 50-80 riders per train weekdays and 200-300 on Saturday, and 200-300 on Sunday. Hardly enough to make a profit for that kind of a operation. I know the city of Vancouver considered the train a valuable tourist asset and demanded it continue even if the city had to fund it. I don't think the city ever did fund it but I know the railroad wanted to take dramatic steps to limit it's operation when traffic was peaking on the BC railroad. The engineer once told me "the railroad wants to shut this down but the city won't let them".

Although steam in long gone in Vancouver the 2860 is still alive and well. I am hopeful something will happen where the 2860 can make some regular runs from Vancouver to Squamish and back in the Summertime. I know that train was a big part of tourist revenue for the town of Squamish, and a even bigger part for the West coast railroad museum. I think between the town of Squamish, the West coast railroad museum, and some help from the city of Vancouver, they can receive enough funds for some regular operations around Vancouver again.

When I saw the 2860 make a trip to White rock I could not believe the amount of people that showed up. I have never seen so many people to come out to see a train in my entire life.

I've had the good fortune to have ridden behind both Royal Hudsons that were operational during the 1970's and '80's. The other hudson was CP 2839 which was part of the Southern Ry steam program for one year ( I think it was 1978 ). Here are shots of 2060 and 2939. Of the two, the 2860 definitely was turned out better with a stainless steel boiler jacket, gold trim and royal heralds. The 2839 had a light blue boiler jacket (!?) but otherwise was presented in CP colors. Of course the tender carried 'Southern' rather than Canadian Pacific.
M

My family rode the train from North Vancouver in the early l ate 70s-80s . A wonderful trip. Where is the locomotive now? I almost hate to ask, the way these beautiful machines have been scrapped in the past!!

Contrary to popular belief, the only Royal Hudson ever to have a polished stainless boiler jacket was 2850, and that was only for the duration of the Royal Tour in 1939. So in fact, 2839's "Russian Blue" is actually the more authentic CPR appearance for the locomotive. Even when 2860 was restored in 73/74, it had a gray jacket. I'm not entirely sure when it got the stainless, but that was a BC Rail addition. 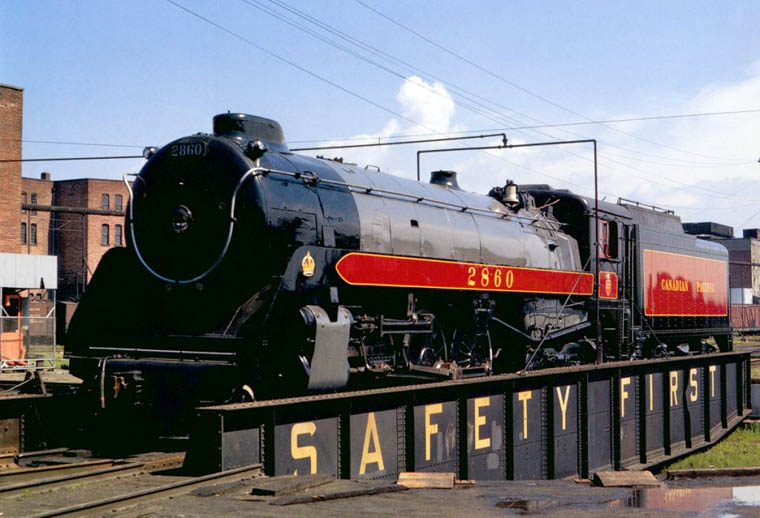 Royal Hudson at the Drake Street Roundhouse in 1974
http://www.trainweb.org/oldtimetrains/photos/cpr_steam/2860P.htm
T

They used to run about 10 cars or so. I believe each car could hold around 80 people. The weekends were really good especially Sunday. During June and July it was common to have sold out trains or close to sold out.
T

Mike G said:
My family rode the train from North Vancouver in the early l ate 70s-80s . A wonderful trip. Where is the locomotive now? I almost hate to ask, the way these beautiful machines have been scrapped in the past!!
Click to expand...

The 2860 that used to run in Vancouver was donated to the West coast railway museum up in Squamish, BC. The museum started a very successful campaign to raise money to get the locomotive running again. To everyones amazement, they not only raised a huge amount of money in a short period of time, they also managed to get the locomotive running again in just over a year. The 2860 has made a handful of excursions in the last few years.

The other stand by locomotive the 3716, was donated to the Kettle valley railway in Okanagan, British Columbia. It was repaired and in excellent condition.

There is 4 Royal hudsons preserved. One in Quebec, one in California, one in Ottawa, and the 2860 up in Squamish. The Mikado P-2k, (although different wheel arrangement) has similarities to the Royal hudsons in appearance.
T

THANK YOU, TacomaTom, for that beautiful and touching tribute to THIS GRAND LADY of STEAM. The Royal Hudon 2860 IS so very BEAUTIFUL indeed !!!
BTW most Beautiful photos indeed in this post - thread !!!
--- Daniel

At this time the 2860 sits and waits for the West Coast Railway Association to raise $150,000 to get the boiler work done to get certified which has to be done every five years. The firebox looks pretty good, as I had an opportunity to climb into the cab this past July at the PGE/BCR centenary convention. Also the 2860 is now equipped with dual gauges which will allow her to be run in the US.

I been on the North Vancouver/ Squamish excursion a couple of times a beautiful trip and listening to the chuffing sound while standing in the doorway while taking in the view. I'm glad I had an opportunity to go on the run. There is nothing like steam travel.
You must log in or register to reply here.
Share:
Facebook Twitter Reddit Pinterest Tumblr WhatsApp Email Share Link