Railroads with out locomotives.

Are their any railroads out there that don't have locomotives just rolling stock?


The only one I can think of is Chicago Heights Terminal Transfer. I've seen plenty pics of their rolling stock, but no locomotives. (Also Leasing or Industrial railroads don't count.)

Guy with the green hat

Well, for a railroad not to have locomotives, there has to be another form of motive power. A few that I can think of are:

Cable car systems (such as the one in San Francisco).

Horse car lines (There's still a few around, including one in Disneyland).

I have seen photos and videos of railroad cars being shunted by tractors, forklifts, and the like, but I don't think those were owned by local industries who had railroad service, and didn't actually own the railroad. Plus, those would be considered "industrial".

If you're in the railroad business, I think it's wise to have at least one locomotive of some sort, even if its a Trackmobile. For instance, if one of your cars breaks down, how are you going to move it?

Also, the Chicago Heights Terminal Transfer Railroad is an industrial railroad, so why are you excluding other industrial lines? CHTT is also a Union Pacific subsidiary.
R

This railroad has no locomotives, but does haul passengers. 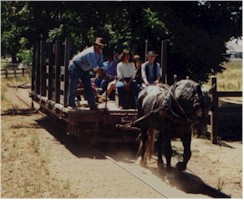 
The Railroad Museum restores equipment representative of those bygone days. Our collection contains over 17 wooden cars from the 1870s and 1920s. Most of the cars were built by the Carter Brothers in Newark or the West Side Lumber Company. We are actively restoring 3 cars and have 7 cars in service. We operate on 1-1/2 miles of track in Ardenwood recreating the original SPCRR's Centerville Branch using draft horses to pull a 1885 North Pacific Coast RR flatcar set up as a picnic car on scheduled runs through farm fields and Eucalyptus groves.​

The Centerville Branch of the South Pacific Coast Railroad connected Newark and Centerville (now one of the districts of Fremont, California). It was a horse drawn branch railroad for its entire 30+ year existence.

Trans Canada switching, which handles the switching of intermodal trains at Roberts Bank, they have no locomotives, they use CN or CP power.

The Oregon Trunk owns neither cars nor locomotives. It has always been a "paper" railroad. It owns the track and the signals and nothing else. SP&S (with overhead traffic by GN) was the original operator.

Generally speaking, most of the railroads that didn't have their own locomotives were owned or controlled by other (usually Class 1) railroads and used units from the owning roads (the Texas & New Mexico RR is a good example, as it never had its own locomotives after its last steamers were retired and used units from T&P, Mopac, and eventually UP until it was sold to RailTex in 1989).
7

Hampton Railways (HLSC) has five miles of railroad that begins at the Portland and Western in Willamina, Oregon and ends at an empty mill site, and has hundreds of centerbeams with that reporting mark. It serves no customers, but is currently used for car storage.
R

Manufacturers' Junction Railway has none. I recently found out about this railroad and even more recently found pictures on Flickr of their stripped locomotives inside their abandoned roundhouse.

CAPA Railroad in Audurn, IN. No power units and no rolling stock. 2.41 miles of track to service 3 or 4 factories.
S

Youngwarrior said:
The Oregon Trunk owns neither cars nor locomotives. It has always been a "paper" railroad. It owns the track and the signals and nothing else. SP&S (with overhead traffic by GN) was the original operator.
Click to expand...

Interesting, why doesn't someone else just buy 'em out?
R