The states of Oregon and Washington have been paying Amtrak to run Talgo train sets in passenger service between Vancouver, B.C. and Eugene, Oregon for quite a few years. The states own these train sets. They normally run with Amtrak power, which usually consists of an F59PHI or a P42-9 on one end in push/pull mode. On the non-power end there is normally a de-engined F-40 called a Non Powered Control Unit, or NPCU. These train sets have 22 axles, and thus are readily identifiable when heard on the radio going through a detector.

Recently the states bought two, I believe, new train sets with a cab built into one end and therefore do not use the NPCU. The one I saw had 19 axles at the detector, so they are identifiable. These have been testing for a while. I caught one in revenue service on 11/30/13 at North Auburn as AMTK train 506. It was powered by AMTK F59 469. Picture attached.

These new sets are owned by Oregon and named the Mt. Jefferson (pictured above) and Mt. Bachelor. They're doing testing and demonstration runs and are supposedly scheduled to enter regular service in early January. They're quite nice inside, but that cab car design is rather unfortunate. I'll try and post a picture I took a couple days ago of them both in Seattle.
G

Thanks for the information, Ed. The big WSDOT on the Mt. Jefferson must have fooled me. WSDOT must share in the operations and ownership costs.
E

I like to think that WSDOT just trolled ODOT in putting the WSDOT sticker on the ODOT trains.

I forget which 3 are WSDOT's and which 2 are Amtrak's. Here's the ODOT info on the new trains. http://www.oregon.gov/ODOT/COMM/Pages/TalgoHome.aspx
And here's a picture from Monday afternoon of the two of them in Seattle. 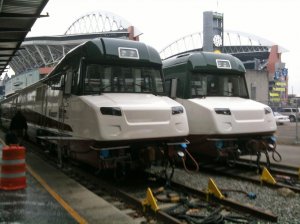 Ed Sand said:
I like to think that WSDOT just trolled ODOT in putting the WSDOT sticker on the ODOT trains.

I forget which 3 are WSDOT's and which 2 are Amtrak's. Here's the ODOT info on the new trains. http://www.oregon.gov/ODOT/COMM/Pages/TalgoHome.aspx
And here's a picture from Monday afternoon of the two of them in Seattle.

I had forgotten the details of the Talgo train ownership. Thanks for the information, Ed and KristopherJ.

Neat picture of the new trains at Seattle, Ed. From what I hear I may be the only person in the Northwest who likes them, but I do. I know trains aren't supposed to be cute, but that is the word that comes to mind for them.