Hello, I'm quite new to the railfanning community, but have been an avid modeler for some time now. Anyways, the Last few years I have had the opportunity to live in the great State of South Dakota and it is here that I learned how to be an armature photographer. South Dakota is one of those states that is usually overlooked in the railroad history books, but this is not deserved. South Dakota has many opportunities to not only look into the past, but also live the past in places such as Deadwood SD, or Hill City with the 1880 Train.

As for modern Railroads, South Dakota has the BNSF Mainline in the Southwest corner in Edgemont, SD which runs roughly northwest from Nebraska connecting the nation to the coal and oil fields in Northern Wyoming and North Dakota. CP Rail, which also owns SOO Line, runs in the state, but mostly on SOO Line, Dakota Minnesota and Eastern (DME) and the DME's sister railroad, the Iowa Chicago and Eastern (ICE). Additionally there is a great tourist railroad in the Black Hills called the 1880 Train which operates steam and diesel equipment. Equipment includes a 2-6-6-2T locomotive (the only operating one left and former Weyerhaeuser lumber company engine number 110), a 2-6-2T, a traditional 2-6-2 prairie and a GE industrial locomotive and finally a GP7. If you would like to see a map of South Dakota's railroads, see the link here: http://http://www.sddot.com/transportation/railroads/maps/Default.aspx

Unlike my fishing spots and hunting spots, I love to share with you my hot spots for railroading!

#1. Hands down, if you want a lot of mainline action, head to the southwest portion of the state to Edgemont, SD. There are many rural roads which run along or near the track, and you are on the edge of the scenic Black Hills. Looking on Google maps, it is easy to get to Edgemont from Cheyenne, WY or from Rapid City, SD. The distance does makes the drive a long one however. But you are rewarded by trains with 4+ locomotive consists and 200 car trains coming in and out of the yard every 15 minutes to every half hour. Additionally, you can drive many of the public side roads North and South and be very close to the tracks. if you love the BNSF, this is one place to put on your map. 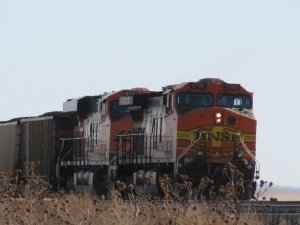 #2. For the steam enthusiast, the 1880 Train is an experience to remember. Besides having sharp turns in the track allowing for unique shots of the train while riding in the rail cars, there is a road called "Old Hill City Road" that starts near the Holiday Inn Express in Hill City, and comes out at the depot in Keystone, both towns in South Dakota. Multiple grade crossings combined with a very scenic background gives unique angles and an experience which is not often possible on tourist lines. 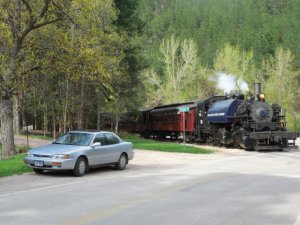 #3. On the East end of the state, if wanting to see the DME, ICE, SOO Line or CP Rail locomotives and long trains of grain hoppers, Brookings, SD is the place to be. On the East end of town, 3M Company and two ware houses get train service on occasion plus there is a gravel company on the other side of the highway. Bring your bicycle here because most of the mainline within Brookings has a system of bike pathways which run within feet of the tracks. A Particularly good place I like to sit at is underneath the I-29 overpass where the bike path goes under the bridge, running within 25 feet of the tracks. The pathway is pavement, so road bikes can navigate easily plus the pathway is elevated about 10 off of the track level, giving a unique photographers platform. Farther east by 5 miles, in the small town of Aurora, SD, is a massive Ethanol Plant where there is constant activity. So much activity, switchers are assigned permanent stations at the plant plus the towns of Brookings and Aurora share a Geep locomotive that parks on a siding in Brookings. This Geep is often used to move around the cars at the ethanol plant of one of the four grain elevators in the area. 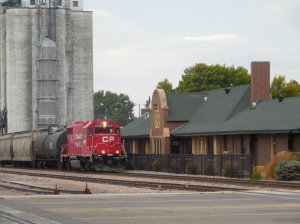 #4. Speaking of Grain Elevators, Rapid City, SD is another great place where the DME/CP Rail mainline has a busy terminal. In addition to an East-West mainline, Rapid City has a North South interchange track that runs on the east side of the Black Hills down into Nebraska where I believe it interchanges at Crawford, NE with the BNSF, or it continues to the UP mainline, I forgot which it was. Anyways, Rapid city has downtown running where you can stand in parking garages, along back streets or follow in some places along a bike path and be within site of the tracks. Most of the action happens in Downtown 1 block north of Main Street. Rapid City has a large grain elevator which gets regular service plus there is at least one major cement plant not to mention feed stores and other small industries. You could easily spend a week in Rapid City and the East side of the Black Hills photographing trains. 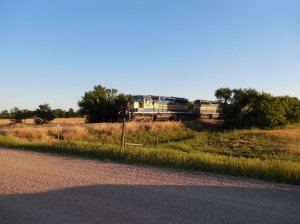 #5. Finally, I have the grandest scene you could ever want from the real world. Dead Center in the state along I-90 there is an overlook where you can see the Missouri River at it's finest. Additionally, this River valley has a very long railroad bridge which used to the be East-west mainline in the state for the CB&Q and CNW as well if I remember correctly. Today it is still a heavy mainline where the DME and CP Rail tread along with the occasional Soo Line locomotive. There are several smaller overlooks on each side of the river plus the I-90 highway bridge Eastbound lanes give an unobstructed view of the railroad bridge. Besides the trains, there is also other things to do in nearby Chamberlain, so I would recommend either stopping for the day, or at least 2-3 hours to get a good chance of seeing a train on the bridge. On each side of the river, you can chase trains easily on the many side roads, plus there is a good stretch of I-90 on the west side of the river where rail fans get a clear view of the line as it heads up a steep gully.

So there are my top 5 South Dakota Railfan locations. If you have any more to add, or to correct any errors I made please feel free to do so.