Got word that the 6-car MRL Officer Car Special train was headed our way from Pasco with SD70ACE 4312 on the point. I took the following pictures at Spokane St, just east of downtown. The stack train on the adjacent track is westbound. 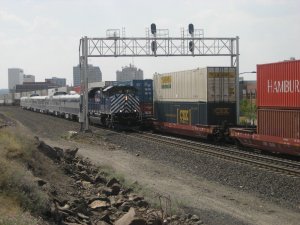 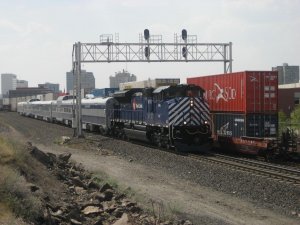 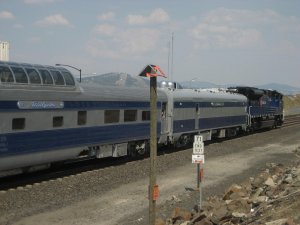 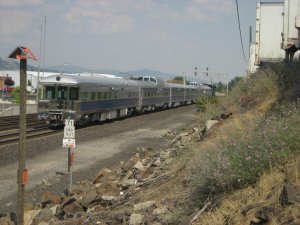 Very nice photos Bruce!!!! Glad you were able to catch it...

Vancouver Shipyards Co. Ltd is the company who overhauled the passenger cars. It is a subsidary of the Washington Companies..

That's what I was waiting to see. Photos of the ex-NP domes back on former NP mainline. Shades of the North Coast Limited! Well, an abbreviated one anyway. Thanks for the look.
Brian Ambrose
Renton, WA
T

Here are a few more pictures of the cars. The baggage / power car #103 is named "Spokane". It's heritage (according to an Internet site) is SantaFe. I did not see any numbers on either of the dome cars, but I believe they are (were) MRL 104 and 105. I found references (from Brian Ambrose) that the 104 is ex NP 552 and the 105 is ex NP 553. The first one in this train is now named "PendOreille" and the second is "Flathead"; obviously lakes in MRL country, but no clue as to which one is 104 or 105. The coaches are an ex SP (T&NO?) articulated coach, where the adjacent ends share a single truck. They are named "Idaho" and "Montana". The business / observation car "Silver Cloud" is ex Rock Island "Lake Michigan".

This train apparently spirited right through Spokane/Yardley/Hauser yard and I was never able to catch it again, despite an intense trip on I-90 & Idaho 41 to Rathdrum ID. 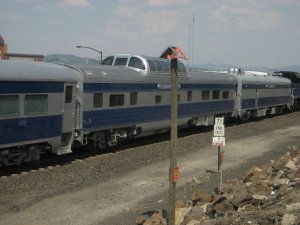 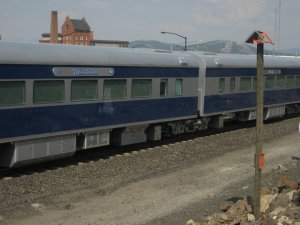 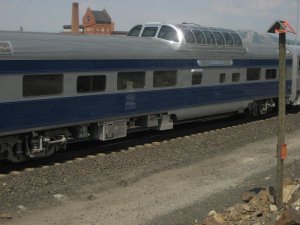 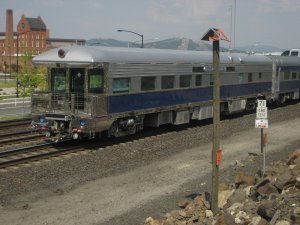 Here is an additional internet link:

Date: 04/16/13 13:49
Re: Progress on the MRL/Washington Companies' Fleet
Author: mopacrr
Silver Cloud, if I am not mistaken, is somewhat of a historic car. It was built for the More Power to America train in the early 50's.It was Rock Island coach 352 and later rebuilt to their business car Lake Michigan. During the last years on the Rock Island it was re named the "The Rock". Fortunately the MRL has seen fit to restore it.
ENDQUOTE
Last edited by a moderator: Jul 31, 2013

Thanks for the photos. I took the liberty of spacing them out a little for easier viewing.

I missed the train at Sunset Ave. in Edmonds by just a few minutes. Hobo, the Sage of MP 18, told be it barreled through town at track speed while being paced by a film crew in a helicopter. Hobo is hoping he makes the final cut of the video.

Bruce Butler said:
This train apparently spirited right through Spokane/Yardley/Hauser yard and I was never able to catch it again, despite an intense trip on I-90 & Idaho 41 to Rathdrum ID.ENDQUOTE
Click to expand...

The train over-nighted in Hauser yard and departed at 04:55 this morning so you didn't miss it in Rathdrum, you were just a few hours too early.

Info from the MRL Yahoo list posted a few weeks back gave this info on the MRL domes.