Staff member
Merry Christmas to all of my friends here on RailroadForums.com

May you have a happy holiday with family and friends! 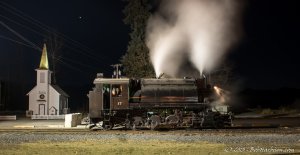 And a Merry Christmas to you, Bob. Thanks for all you do to keep this forum a really great site to visit. That church at Elbe really makes a super backdrop for MRSR Locos. Tom

Back at ya' Bob! Merry Christmas to you and every forum member
A

Twas the night before Christmas, and all through the yard,

All the switchmen were switching, some working quite hard.

The grips were all hung by the shanty with care,

In the hopes that a time slip would soon show up there.

The trainmasters were nestled, all snug in their beds,

While visions of test failures danced in their heads.

The hogger in his kerchief, and I in my cap,

Had just settled down for a sneakey quick nap.

When out in the yard there arose such a clatter,

I sprang from our motor to see "what's the matter?"

Away from the cab, I flew in a flash,

To line all the switches, and stop a bad crash.

The moon on the field of new-fallen snow

Gave the lustre of mid-day to objects below,

When, what to my wondering eyes should appear,

But a worn out SD40, dragging eight old reindeer.

Run by an old hogger, who looked like St. Nick,

I knew in a moment, I had to act quick.

At yard speed the 40 down my lead he now came,

And he whistled, and shouted, and called them by name;

On, Comet! on Cupid! on, Donner and Blitzen!

"To the top of the yard, we'll cross over them all,

As dry leaves that before the wild hurricane fly,

When they meet with an obstacle, mount to the sky,

With a gon full of toys, and Saint Nicholas too!

And then in a twinkling, I heard an old horn,

Blowing for the brakes, soft and forlorn.

As I threw down my lantern and was turning around,

Down the old 40s steps the old hogger bound.

He was twitchy and wormy, from his head to his feet,

His yard list all folded and sorted, quite neat.

A bundle of time slips he had flung on his back,

His eyes -- how they twinkled! his dimples how merry!

His droll little mouth was drawn up like a bow,

And the beard of his chin was as white as the snow;

The stump of a pipe he held tight in his teeth,

And the smoke it encircled his head like a wreath;

He had a broad face and a little round belly,

That shook when he laughed, like a bowlful of jelly.

He was chubby and plump, a right jolly old elf,

And I laughed when I saw him, in spite of myself;

A wink of his eye and a twist of his head,

Soon gave me to know I had nothing to dread;

He spoke not a word, but went straight to his work,

He filled all those grips, then turned with a jerk,

And laying his finger aside of his nose,

And giving a nod, to the seat box he rose,

He notched out his 40, to his team gave a whistle,

And away they all flew like the down of a thistle.

But I heard him exclaim, ere he drove out of sight,